Seattle beat the Titans and basically held steady in the standings, while Marshawn Lynch had a "cool" game in the air.

Turn on the TV, Russell Wilson and the Hawks are on

And the Titans were playin' with no Jake Locker

I got drunk last night but had no hangover, homey

Game is on, turn the volume of the crew real low

Thinkin' to myself "Will I live to see a Super Bowl?"

Prepare myself to watch another murder scene

Grabbed the bottle of Jack cause I had to start boozin'

First 12 to Golden, then 8 more to Marshawn Lynch

It ain't a real breakfast without a Russell scramble

Then 28 to Dougie Fresh, the world's best gamble

Finally a 1-yard run, not a tackler in sight

Go against Lynch and you know dude gets live

Just fucked around and caught a pass for 55

That was fuckin' scary but Sunday was a good day

PFR's chart doesn't start at 50/50 (as a real Win Probability Chart shouldn't, since we do know things before games start) and they have Seattle starting out as 83.40% to win. That was over 94% as they lined up to kick a field goal before halftime, but Maraghost (Happy Halloween) pulled a highlight that rivals anything in Jose Canseco's career and it was a full 26% drop.

The Titans made it a cool 50/50 split early in the third quarter but were never really favored to win the game at any point.

The Seahawks had them right where they wanted them on Wilson's 55-yard pass to Marshawn Lynch, which was worth +15.6% in the win column.

"Cool" of the Week: Marshawn Lynch 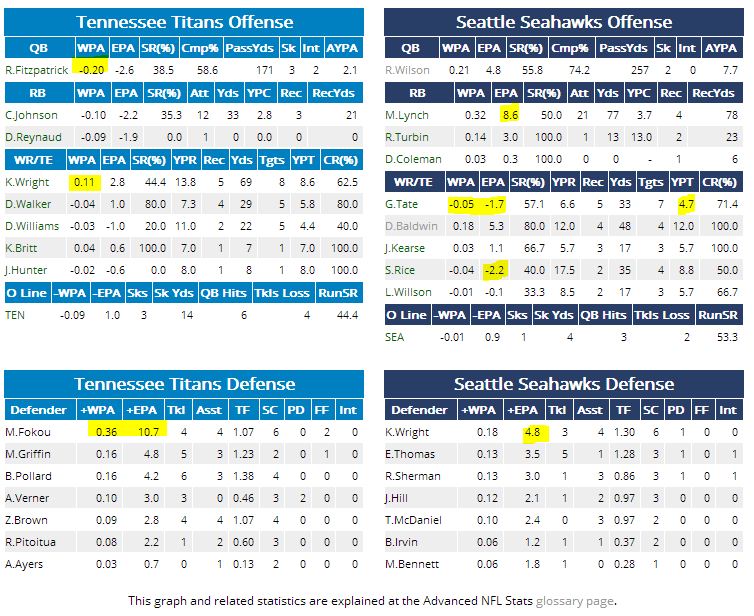 Lynch's 0.32 WPA and 8.6 EPA led the team. K.J. Wright did a great job of filling in for Bobby Wagner and isn't a concern in the middle.

"Fool" of the Week - Golden Tate

I hate tot do it to one of my favorite players and an underrated talent around the league, but not a good performance for Tate. Besides just gaining a paltry 4.7 yards per target, critical plays directed at Tate were unsuccessful:

Not that Sidney Rice saved any face this week. That situation is getting uglier and uglier.

Put My Heart In a Blender: Inside-Outsiders DVOA Update

The Seahawks stayed in second place in DVOA but slipped a bit from ninth to tenth in Offensive DVOA.

As you can see, three of Seattle's first six opponents rank top 10 in DVOA right now. However, the Jaguars are tracking as the worst team through six games of all time, the Texans are 29th and the Titans are 20th so the past schedule difficulty ranks only as the 28th hardest in the league.

Not uncommon for good teams though, the Broncos rank 32nd, the Chiefs rank 31st.

Seattle's odds of making the playoffs actually went down 0.5% from last week. Their Super Bowl odds remained the same. (And the Giants closed the gap significantly on Jacksonville for the number one pick.)

The Seahawks are 84.5% to win their division, tops in the NFL. They are also 76.1% to get a bye week, also the highest mark in the league.

Stat of the Week

There is a 15% chance that the Broncos and Seahawks meet in the Super Bowl according to FO, more than twice as likely as any other scenario. There's also a 5.3% chance that Pete Carroll faces his old team, the New England Patriots and a tiny 0.3% chance that he faces the Jets.

However that's still a far-cry from the odds that there is a Super Bowl XL rematch, only a 0.1% chance.

The Arizona Cardinals aren't all that bad, ranking 17th in overall DVOA. They jumped up by seven spots this week despite losing to the 49ers. The real problem is once again offense, as they ranked seventh on defense but 24th on O.

Carson Palmer might be an upgrade over Ryan Lindley and John Skelton but that's saying exactly as much as you think it is. He is currently 32nd in DYAR, behind players like Christian Ponder, Matt Schaub, Josh Freeman, and Matt Cassel. He's behind all of the Vikings quarterbacks!

They still do quite well on defense, ranking seventh overall in defense DVOA and sixth against the run, which should help keep things interesting on Thursday.

But hopefully not that interesting. The Cards rank 21st on special teams and if the Seahawks field goal unit doesn't do all the scoring for Arizona we'll be just fine.

The Russ Bus has carried it 10 or more times in four of his last five games after having done so only once during his rookie season.

In the pantheon of Russell -

The Seahawks have faced the 11th-toughest schedule in terms of the defenses they've faced, per DVOA.

- In one game, Nick Foles was better than Peyton Manning has been all season! Foles scored four touchdowns in his start against Tampa Bay on Sunday and currently ranks first in DVOA and second in QBR. That will definitely last.

- Philip Rivers falls out of the pace for 5,000-yards club, leaving Manning, Drew Brees, Matt Ryan, and Aaron Rodgers. Seems like Ryan will fall out eventually without Julio Jones.

- Jimmy Graham was held without a catch this week against the Patriots and still leads the league in receiving yards.

- Eli Manning is the seventh player in NFL history to throw at least 15 interceptions through six games and the first to do it since 1986 (Dan Fouts.)

- The Seahawks are 5-1, tied for best record in the NFC! Without Percy Harvin!