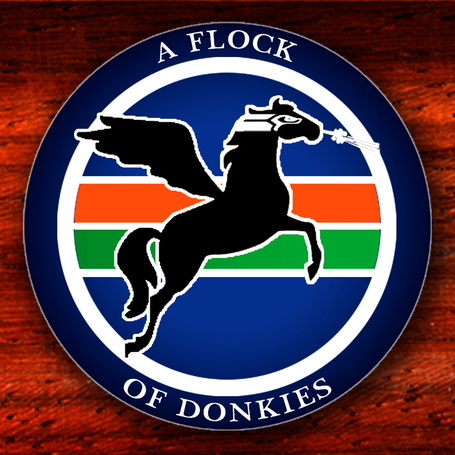 From itunes here! Part 1 and Part 2

In today's 2 part mega pod the guys are joined by their friend and member of the Military Seahawkers, Brandan Schulze. In Part 1 they start out with some Chicken Scratch and review the Titans game and Brandan is worried about the Cardinals based on the Seahawks dreadfull historic performance in Arizona. At 45:44 They get into the Donkie Spit segment and touch a bit on the Jaguars game but focus on the Broncos firts real test on the road against the Colts. The Elysian Loser Pale Ale is reviewed at 37:32 and Adam tells you why the pinky under technique is essential. The fellas also talk about their weekend in Butte America. Be sure to check out the NFL segment in Part 2!

A Flock of Donkies is a podcast that focuses on the two Northwestern NFL teams, the Seattle Seahawks and the Denver Broncos. We also review a microbrew each episode and practice the 3 S's... we smoke, swig and swear. So listen accordingly.