The Seahawks have historically failed to beat the Cardinals in their fancy stadium, repeatedly finding heartbreaking ways to lose to them at the gun. This year they tried their hardest for roughly 2 1/2 quarters of football to accomplish that again, but in the end it was effectively a blowout win against a team with a stupefyingly inept offense.

Arizona fans were not pleased, as you will read on this week's Enemy Reaction. All game thread comments are courtesy of Field Gulls and Revenge of the Birds. 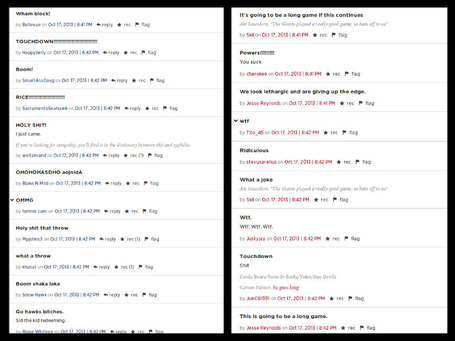 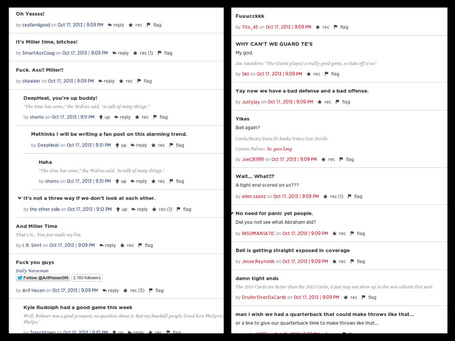 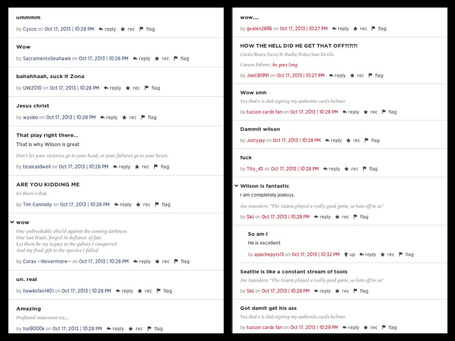 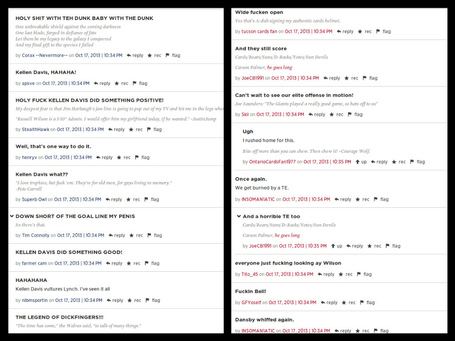 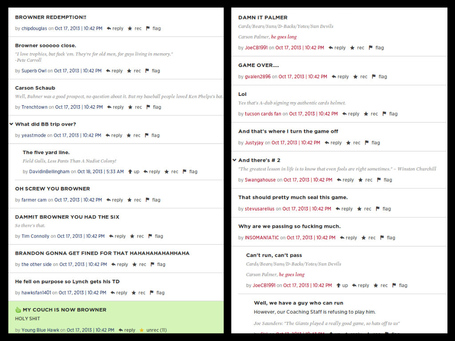 They gave up seven sacks on Thursday night. Blame was placed everywhere by Cards head coach Bruce Arians. He called out Bradley Sowell. he called out Eric Winston. He said about the only person on the line who shouldn't shoulder any of the blame last night was center Lyle Sendlein. Sounds about right. -

Post-Game Video Crow: There is none, so here's this thing

Seattle is 3-1 on the road and led this game from start to finish. Next week they play the St. Louis Rams, who just lost Sam Bradford for the season to a torn ACL. Kellen Clemens is unquestionably terrible and there's almost no chance the Rams put up a great amount of points on Seattle's defense unless the Seahawks give them the ball at the 1 yard line on every drive.

I am however very cautious of the Rams pass rush, which is pretty much the only thing that keeps them afloat as a defense. Robert Quinn and Chris Long are beasts, and at the LB position I'm a huge fan of James Laurainitis. The Seahawks offensive line is incredibly bad right now in pass blocking and the last thing the Seahawks need is for Wilson to be running for his life for another week. Thankfully, everything else about the Rams defense is sub-standard, and St. Louis' inability to sustain offense will probably give way to their defense tiring and relenting en route to a blowout loss.

Last year's team was already great despite multiple losses to bad teams. This year's team is even better, and hot damn I will enjoy every moment of it. The Seahawks have had periods of greatness, enough to be considered playoff caliber, but this is the first time (looking at Seattle's history) where I feel as if the Seahawks are primed for consistently being in the Super Bowl hunt. And it's freaking awesome.