From uncut rock, to polished gem...the process of one amateur draft scout, and a couple of his latest Leo diamonds.

In today’s Gems, I’m going to take you through a chronological, step-by-step, sequence of amateur draft scouting.

1.) Watch as many game tapes as you can and try not to exclude a player because you don’t recognize his name (in fact, it’s BEST to not know a player before watching him…blind Pepsi challenge will give you the most objective opinion). It is so easy to watch player tape nowadays thanks to technology (internet, video capture, editing software), draftbreakdown.com, freelancers, etc. Videos will appear at various timings; some are up the day after a game, some will come along a week or two later.

This week, a tape of Louisville junior safety Calvin Pryor was put up a couple weeks after the game was played. A twitter follower had mentioned Pryor to me a month or two ago. I watched a couple of his 2013 games after that tip, but I wasn’t really impressed. He was missing on a ton of tackles. I couldn’t get past that and find enough redeeming about his play. But, as I mentioned last week regarding Gabe Jackson; scouting is fluid…players have bad games, players improve, and my opinion can improve with further exposure to a player. So I watched this game Pryor had versus Rutgers to see him again for the first time…and he looked like a whole new player. Damn. This tape is "FLASH" personified.

There’s sort of a catch-22 when scouting safeties…a lot of times they’re not even in the screen on TV copy, but then when you find a good safety, with elite click-n-close speed, you’ll recognize them by the blur and vapor trail coming from off-camera that then blows plays up. Gotta have your pause/rewind fingers ready on great safety tape. That was the case for Pryor all game long against Rutgers. Here we go:

2.) A lot of times while watching tape, when I start to get that buzz on the player, I’ll pause the tape midway to go look up measurables or season stats. On Pryor, on eye-test, I thought he looked like an Earl Thomas type: undersized but lightning fast with decent boom. But his listed measurables turned out to be 6’2"/208. Say what? This dude HAS to be running mid to low 4.4’s and he is 6’2"/208?! (For reference: Earl is 5’11"/202 and DeShawn Shead is 6’2"/220) Measurables can often be misrepresented by respective schools, so I’m not counting on Pryor hitting those numbers at the combine. I’d be stoked with even 6’0" though.

As far as season stats, many scouts don’t look at or care about production…I do. It’s a huge accompaniment to the tape in my study. I feel no shame about it. Stats are the lead guitar to the drum and bass that is film. Stats can either alert me to look at a player, or (as in the case I will soon discuss) confirm that what I think I’ve seen has merit. Other scouts will give a player less-than-favorable reviews, months later find that player leading the country in sacks, and suddenly "see so much talent/potential" in said player. That is called being full of it. Only I didn’t say "it".

Pryor has a nice line of 47 tackles, 3 INT, 6 total passes defended, 3.5 TFL, 2 QBH, and 2 FF. Those TFL tell you Pryor can be sent on a safety blitz and he’ll get there. The 5 combined turnovers-created tell you he can ball hawk, and if he doesn’t get there to break up the pass, he can still strip it out. Back to the film. 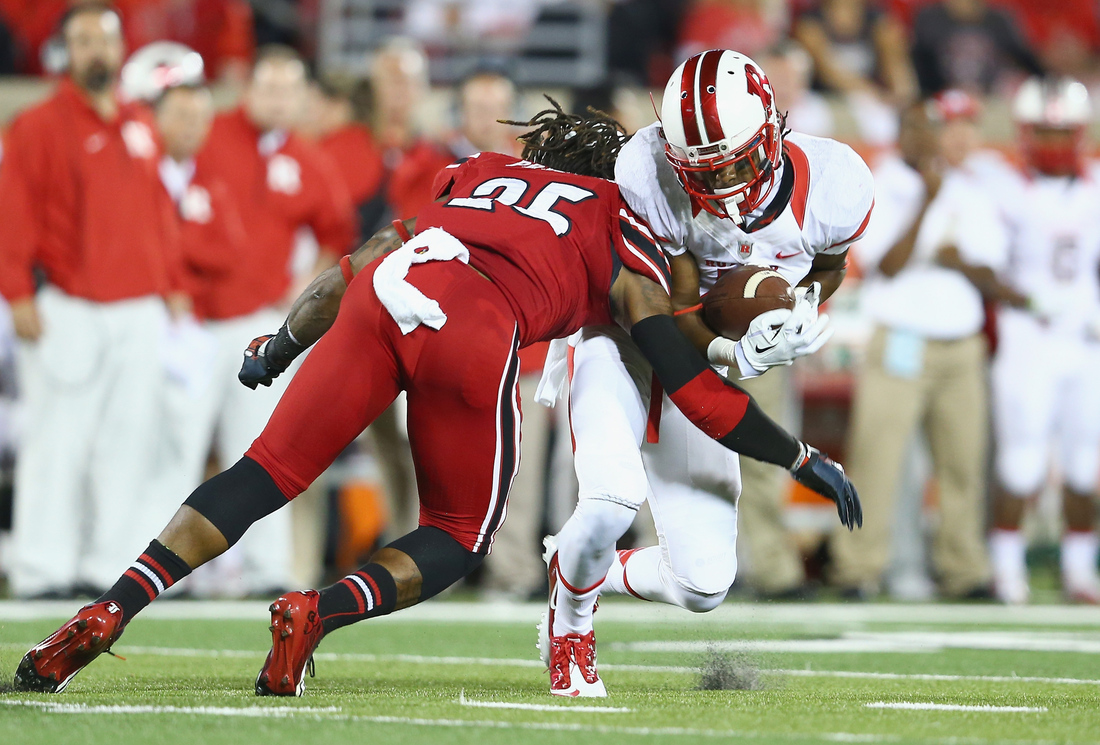 Couple specific notes: a) Pryor needs to be really careful about leading with his helmet. He does it a couple times in this game, without penalty, but it could cost him 15-yard chunks and/or cash money at the next level, b) Pryor, in this game, has exceptional tackling…even taking down that 6’6" monster Brandon Coleman with relative ease, c) Pryor has excellent sportsmanship…patting Rutgers’ players on the head, helping them up after laying them out…a little thing, but notable, d) Pryor is all over the field: up on the LOS, playing 30-yard deep FS, in the slot…love it, e) for real though, look at Pryor’s afterburners kick when his fellow DB picks off the pass at 1:32 (I rewound that multiple times!).

Okay, so I’m buying this player. What next?

3.) Check the stock. You can do this on any number of sites, or combine a few to get a good median idea. I use CBS/nfldraftscout because they run the deepest and have the most sortability. But, by no means, is it Bible. Nor is anyone else for that matter.

Stock on Calvin Pryor: not listed. Well…more accurately, he’s listed in the 2015 draft as the 3rd-rated FS. Why CBS will list some underclassmen on their 2014 draftboad (Ha-Ha Clinton Dix) and not others, seems rather inconsistent. Of course it’s because HHCD is rated higher and expected to declare this year, but still…

This is a good reminder that we should never fall too in-love with a player that has eligibility remaining (which sucks cause the junior class this year is stacked). I think this is especially true of QB’s, as they seem to return for Senior years more than most positions. So don’t fall too hard for Bridgewater…or Mariota…or Hundley…or Manziel…okay, maybe fall as hard as you want for Manziel. That dude wants to get paid yesterday. We digress.

I'm putting a 3rd round value on Pryor based on this most recent tape, and if he returns to school he will most certainly have a shot at 1st round status in 2015.

4.) At this point we can watch other games from the same player to deepen our book on him, move on to another player, or, in this case, go back to the same tape we just watched. You see, I happened to spot something earlier that needs my attention. Same game: Louisville vs Rutgers…right at the 0:38 mark…WHO WAS THE GUY THAT CAME FROM LDE ON THAT SACK??

#91...quick, pull up the Louisville roster to find that that jersey number belongs to Senior DE Marcus Smith. The roster also shows that he stands 6'3"/252. In the back of my head the dots are being plotted...more on this later. I pull up Smith's statline: 21 tackles, 9 TFL, 6 sacks, 6 additional QB hurries, 1 FF, and 1 blocked kick. Being a guy that studies CFB leaderboards weekly, I know 6 sacks is high up there. I go to confirm...sure enough; tied for 13th in the nation.

This is when the story takes a turn…Memento style. 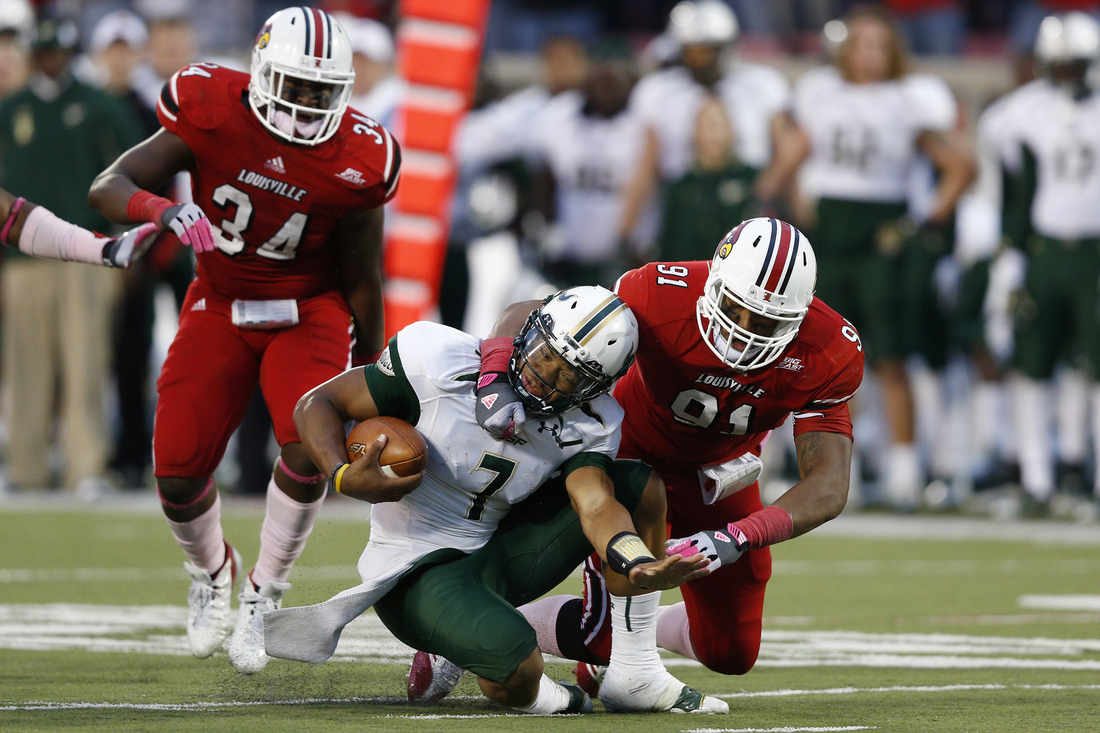 Another Memento moment: it dawns on me that @davishsuseattle had tweeted/retweeted on Thursday October 10th that John Schneider had been spotted at the Louisville/Rutgers game. At the time the talk was: jokes about him scouting Teddy Bridgewater, serious consideration that he was looking at Brandon Coleman, and my input that he could also be looking at Louisville WR Devante Parker (6’3"/209 Junior with 26rec/441yards/16.96ypc/7TD on the year).

Back to the present, the dots we plotted earlier are now being connected. I think JS was there in a major way for Smith. A) He’s the only Senior of the entire group we’ve talked about today from that game, B) Smith fits a beloved PC/JS player type to the LETTER, C) Smith showed out the night JS was there to the tune of: 5 tackles, 1 hurry, and 3 sacks.

Stock report: good ol’ draftscout has Marcus Smith as their 30th rated DE and 378th rated overall player…good for a draft projection of: below UDFA. Consider yourselves warned/enlightened/cutting-edge. (And watch that number climb.)

Since I’ve already given away my Leo measurables…there is another guy I’ve had my eye on for much longer than Smith, going as far back as last year, but whose intrigue has intensified this year after noting weeks ago that he was listed at 6’3"/245. This time I’m talking about Boise State’s Demarcus Lawrence.

So why has there been so little buzz on Lawrence? One part slow start (only one sack in his first three games), one part *character issues* (missed Boise’s game week 2…suspended by Coach Peterson). But things are heating up for Lawrence lately: at least one sack in his last three games, and 3.5 sacks last weekend against Nevada. That sounds like a game we should watch:

Lawrence now has 6.5 sacks on the year (tied for 7th in the country), and 9.5 TFL. He also has 38 total tackles (a pretty significant number for a DE), and two blocked kicks. Whereas Marcus Smith's stock seems criminally undervalued, I think Lawrence is pretty accurately positioned in the 5th round. Character issues will knock you down every time, and he may fall farther than 5th. With a deep group of DE already contracted, Seattle doesn't NEED to draft one early (if at all), and could take a flyer in the 6th to see if they can get a Burfict effect.

Lastly today, I’ll take a request from the tweeps and put up this tape of UNC tightend Eric Ebron. With ASJ slipping in his projection, the race for #1-2 TE is looking like a two-horse race between Ebron and Jace Amaro. And they ARE both horses. Both of those guys (and ASJ) are gonna cost a pretty penny. Is it a price I’m willing to pay in lieu of solidifying present/future depth on DL or OL, and maybe splashing on WR? No. I think there is almost always tremendous value to be found at TE through the 4th round (Dennis Pitta, Jordan Cameron, Julius Thomas, Garrett Graham anyone?).

Ebron is eating this year, and this Miami game was his biggest meal so far:

Final numbers: 8/199/24.88ypc/1TD. That tape actually reminded me of Vernon Davis a little bit. This is the upside of Ebron. The more realistic player comp, for me, is probably Jermichael Finley. But if I’m being honest, I think the league will give Ebron more of the Davis treatment. I’m guessing Ebron won’t even be available to Seattle, but it is a name worth knowing.