A heartbreaking loss for the Seattle Seahawks this Sunday. A game we should have won that we didn't due to not closing the game out. Sure the refs didn't have good calls, but its not a good enough excuse for the lost. No longer undefeated, but still a top the division with a 4-1 record.

So Now this is what I see on various websites:

-Lol, did Seattle think they were going to go undefeated? Keep dreaming. You guys suck on the road and you didn't get to hold all game this time and look what happens. And don't whine about injuries. Others teams have it so much worse.

-And we feel sorry for a team that can only play at home. It's call a home-field advantage. No great team would ever need it like Seattle does.

So the Seahawks suck on the road because they lost a very close game on the road. So out of the past 7 total games on the road the Seahawks lost 2. (Colts, Falcons). Learn to back up your opinion before you say something. Then maybe the 12th man could respect it. UNLIKE this statement were thats all 9ers fans can say.

Also I wouldn't consider it whining about injuries when the Seahawks are missing 4 key blockers (Pro Bowler Russell Okung and Max Unger, then Breno Giacomini and Zach Miller) not to forget Percy Harvin. Would Russell Wilson have more time to throw the ball and recievers be more open due to the addition of Harvin? I would say so and the game could have ended the other way, but thats not the case. Saying that is just a statement realizing what could've it been with them.

ESPN "I feel like the season is over. I expected better from them."

Bandwagon Fan Alert. How can you feel the season over. The Seahawks have won 9 out of the 10 last regular season games. Every team loses and the Hawks lost to very good Colts team. We are 4-1 top of the division and have very winnable games the rest of the season to stay on top. If you don't have faith in your team after they lose one game, you are not a true fan. I'm done wasting my time on that.

Bleacher Report. SEAHAKS ARE OVER RATED THE O LINE WILL COME BACK TO BITE THEM AND WILSON NEEDS TO BECOME CALMER IN THE POCKET BUT THAT HARD WITH A GARBAGE OLINE SEAHAWKS GO 11-5

First off this guy seems to be the one who needs to calm down with all caps (someone wants attention). I think Wilson was quite good and calm with a bad O-Line. 200+ passing and 100+ rushing with 2 TD and 1 INT. Is pretty damn good. The O-Line will get better every week so it won't bite them. Unger back next week Okung/Giacomini later on. 200+ rushing yards (Marshawn Lynch Robert Turbin Russell Wilson) without them is good so they are not garbage. I am not happy with the quality but it could be a lot worse. They have been keeping us in the game (more thanks to Wilson's Heroics) which is key.

Also Various 49ers fan started to say the "Seacocks" suck because we lost to the Colts. 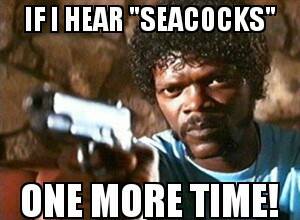 Overall this is pathetic to see from opposing fans. One loss after 4 wins to begin the season. I must be crazy thinking the Seahawks are actually one of the best teams in the league while still able to win 4 of those game missing key players.The Seahawks will only get stronger as the season goes on when we get them back. I also feel this loss will only feed the fire to keep the players motivated to put in 110% and stay focused on the main goal: playing in February. Anyway on to the next game back at home in the CLINK against the Titans

NOTE FOR EVERYONE: If you have an opinion make sure you back it up with evidence, or else you just look stupid. Its that simple.

Comment any funny/stupid posts you see. It will lighten the mood/feed the fire after a upsetting loss.

Is there reason to be worried after starting the season 4-1?