The Seahawks lose 34-28 to the Colts for their first loss of the season, in a manner that was sure to give some Seattle fans flashbacks. It was a fairly dominating performance against a good football team undone by poorly timed mental errors, a couple of great plays by the opponent, and very questionable officiating. Sound familiar?

Seattle fans have never come to grips with that other loss that shall not be named at the moment, perhaps this reliving of similar circumstances for slightly lower stakes will help them come to grips with it. Because winning away from home is hard, doing it against a good team is even harder, doing it against a good team that is getting all the calls is even harder still, and the Seahawks nearly did just that.

Indy made explosive plays to give themselves a chance, and then made the most out of referee gifted assists. The Colts were in the process of being dominated in all facets until the 73 yard deep bomb to Hilton vs busted coverage (poorly timed error #1), and the following field goal block and return for a TD where Ricardo Mathews bull rushed Jean-Pierre straight back and made a great block on the kick.

At this point in the game the Colts had made their own luck, and now lead 14-12, despite being unable to do anything on either side of the ball for over a quarter of the game. Two explosive plays, two touchdowns, nothing else. Seattle had missed out on 5 points so far on calls by the officials on the touchdown ruled safety, I don't want to dwell too much on that play because it was truly a 50/50 call, but it was the first of many 50/50 calls that would not go their way.

In what would have been the worst call of the game had there not been oh so much worse on tap, Golden Tate was called for offensive pass interference negating a 28 yard gain. In the end this call doesn't hurt the Hawks at all because they still score on the drive (TD Kearse) but it really set the tone for how the refs were going to call the game. Phantom contact by Seattle rules are in effect.

On the following drive a Bruce Irvin sack pins the Colts to 3rd and 22 at their 7 yard line setting up what I consider to be the biggest game changing play of the day. Seahawks jump off sides giving Indy a free play, Luck throws a prayer deep to which the refs call Browner for pass interference and gift Luck and the Colts 39 yards and a first down. 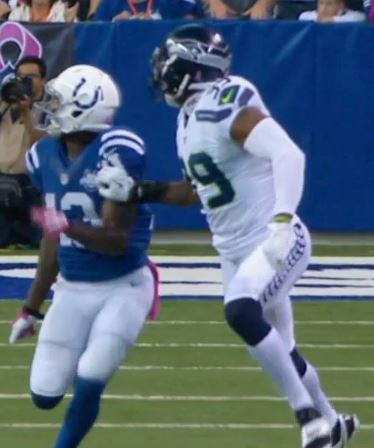 Browner has position on Hilton, who needs to run through Browner to have any chance at the catch. 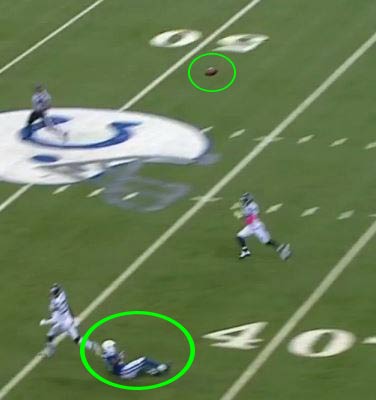 He instead falls to the ground looking for the call and the ball sails 15 yards over his head. He had zero chance of a reception, clearly an uncatchable ball. It was a bone head play by Browner because he didn't need to make contact at all to make the play, he had position on Hilton.

This is around the time of the game I came to the conclusion it wasn't going to be our night.

The feeling was going around elsewhere during the game too,

@FieldGulls It feels like the Detroit game from Feb. 2005

(lol, that's just me somewhere else)

It was the second drive in a row where the refs made critical calls against the Seahawks, and what should have been 3rd down and 17 from the Colt's 12 yard line was now closing in on field goal range. The drive ends up resulting in a field goal for the Colts. For those keeping score at home the ref's total is now -5 Seattle, +3 Indy.

The very next drive is killed by another penalty, this time on Sweezy for being illegally down field, negating an 18 yard catch by Baldwin and takes the Hawks out of field goal range to end the half. This was a dumb penalty by Sweezy that cost 3 points, and was the correct call. Sometimes the you get away with plays like this, but when it rains it pours.

It was a relief to get to halftime, honestly.

Despite the calls Seattle held a 19-17 lead going into half time, but the second half will mirror the tone of the second quarter. Chris Clemons forces a sack fumble on Luck, Seahawks recover and the offense comes onto the field. 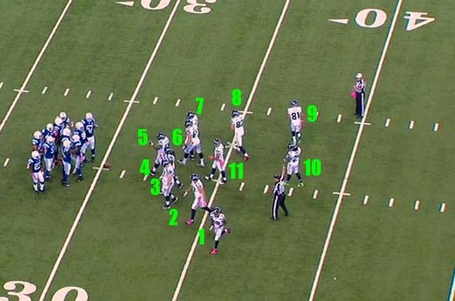 It's hard to make out in this picture, but there's Ron Winter, flag in hand, finger pointing out and counting all 12 11 piggies that go to market. This is the point where paranoia starts to become justified. I hope the league's concussion tests have a higher degree of difficulty than this.

Down 28-23 and facing 3rd and 10 from their 25 yard line, Luck tries to hit Hilton on a back shoulder sideline rout. Hilton runs a short rout, initiates contact with Sherman, and turns to make a play on the ball. Ball is circled in the pic. 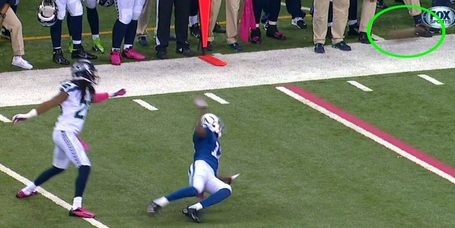 Hilton pirouettes and falls on his ass as the ball sails by him, 7 yards away, uncatchable. The pass was thrown out and to the sideline and Hilton flops for another PI call. First down Colts. The Colts proceed to move the ball down and score the go ahead touchdown on this drive. They elect to go for a 2 point conversion, and on the play Reggie Wayne pushes off the defender to secure the pass. The type of call that doesn't always get called, but had been called all game vs. Seattle on both sides of the ball. Drive results in 8 points.

One of the first positives that can be taken from the game is that the "can't win on the road" saw has officially been retired, even in a loss. Winning 5 out of their last 6 on the road didn't do it. Beating the Texans in Houston in miracle fashion didn't do it. Losing in Indy did.

The Seahawks of two years ago would have folded up and called it a day in the face of getting homered, but this team competed, and competed well, up to the final whistle. People will no longer be able to say the Seahawks aren't the same team away from home with any sort of truth. What we saw yesterday was this road version is the same team that plays in Seattle. They win this game 8 times out of 10.

Sometimes when allowed to, players will make great plays. 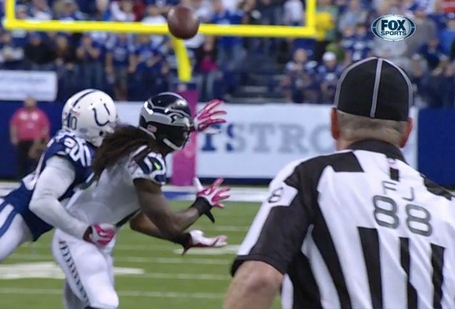 "I don't see nuttin' wrong with a little bump and grind"