Giving the 12th fans what they're asking for: yummy new draft options at the flanker WR position.

A lot of times, during and after Seahawk games I like to do a fair amount of twitter lurking to take the pulse of where the majority of 12s are finding problems with the roster. This week it was the most obvious week ever…only two (maybe 2.5) names kept popping up: Paul McQuistan, Sidney Rice, and JR Sweezy gets the .5 for his one giant bone-head play. I’ve spent large portions of the last two weeks’ Gems talking O-line and I haven’t seen any new names I’d add to the list this week.

Instead, let’s devote this entire edition to projecting players that could be drafted to help push Golden Tate contract negotiations, push Jermaine Kearse to continue to improve, push the entire WR group as a whole, and perhaps push Rice and his huge contract out the door. Plus these are some of the sexiest draftbreakdown.com game tapes!

A reoccurring theme on the tweets this week has been the desire for a deep threat and/or a guy that can take a bubble screen and turn it into a house call. I happen to think this is a GREAT year to be looking for one of those. Assuming 3-5 juniors declare (or redshirt sophs like Mike Evans), there will be quality, quality WR to be found well into the 3rd round. Of course, the Hawks don’t currently have a 3rd, so I’m kinda targeting the 2nd. If they make the playoffs and can get deeper into them this year than last, we’d be talking about drafting after #25 overall. To me, the further back in the round that number climbs, the less I mind spending a 1st on a WR, but I’m still not in love with the idea. Save for one guy.

So, who will be available in the 29-32 range? Better yet…let’s first talk about who won’t be there.

Sammy Watkins…I said months ago that I preferred him over Marqise Lee and I think the season has played out proving that. I think Watkins will go as the 1st overall WR.

Marqise Lee…The people that will argue that Lee hasn’t had a quarterback to get him the ball may have a point…but watch some of the names I will bring up soon and tell me if you know the name(s) of their QB(s). There are still ways you can parse the stats to find WR’s that are making the most of even limited opportunities from undertalented QB’s. I don’t buy the excuses on Lee. How far Marqise will fall is yet to be seen. I don’t know that he falls past #24, but it wouldn’t shock me. We’ll exclude him regardless cause even if he falls, he’s not really the type I’m looking for.

Mike Evans…as I said; a redshirt sophomore…but if he declares, I think he’s coming off the board before Lee as well. He’s just a monster. Just for funsies:

It should be noted that all three of those just-mentioned have eligibility left should they decide to return.

The next two names most commonly mocked between the late 1st and 2nd round are Jordan Matthews and Brandon Coleman. They are both known entities for their opponents’ defensive game-planning, but only one has been able to walk in as the known #1 target and routinely walk out with 100-yard games. It’s Matthews. He is Vanderbilt’s #1 offensive weapon, draws the toughest CB assignment, and is still putting up the numbers of one of the top-10 WR in the country. I think Matthews’ stock is just gonna keep climbing due to his stellar play, not to mention his future combine workout and interviews (which he will crush). I have my doubts that Matthews will be on the board when Seattle drafts, but he’d be the one guy I think I’d go WR this early for.

So now we find ourselves squarely in the 2nd round (and later) WR group. We’re gonna take a look at the size, the production, and the tape of each of these: Allen Robinson, Paul Richardson, Odell Beckham, Kasen Williams, Devante Parker, Brandin Cooks.

Let’s start with Beckham. This is the guy with the most buzz right now. One of the smaller guys I will profile, listed at 6’0"/193, Beckham plays MUCH bigger. In fact, I was shocked when I read he was 6’. There’s a gif floating around somewhere of Odell one-handed catching a kickoff midflight on its way out of the back of the endzone. One recent comment I made on twitter about him was that much of his game reminds me of Markus Wheaton, but with the hands of Nuk Hopkins. And the word around CFB is that he, and LSU’s other stud WR Jarvis Landry, have vice-grip handshakes. One thing we know very well here in Seattle, an undersized guy with huge mitts is not necessarily a bad thing. Let’s take a look at Beckham’s biggest 2013 game, last weekend against Mississippi State:

This is speed, this is suddenness, this is exceedingly rare ability to sky and high point the ball. The things that Cam Cameron is doing right now for the LSU defense are going to earn Beckham, Landry, and Zach Mettenberger a LOT of Sunday money. We’re giving Beckham two asterisks…one for being a junior, and the other is a bullet for his stock being on the rise. Odell currently has 3rd round projection, but if he declares there’s no way he gets past Seattle’s 2nd pick. In fact, might have to trade back from their 1st rounder and grab him early 2nd.

At this point I’m tempted to make a tangentially point about the randomness national draft writers have when determining which underclassmen to include in their 2014 mocks/big boards, and which they leave for 2015. To my eye, it’s completely arbitrary. Stop doing that.

Next Junior WR up is a player I have written on before: Penn State’s 6’3"/205 lb’er Allen Robinson. Believe it or not, Robinson has the exact same listed measurements as Jordan Matthews. Kind of a nice Matthews consolation prize too. In fact, Allen actually has more RAC ability than Matthews, if that’s what you prefer. Matthews has more mettle and better physicality. Robinson has shown some really nice development from his sophomore year to his play this season. Where he once was extremely unreliable and prone to drops, I now find him catching everything. My bigger concerns come from his body language on-field…is this a guy that LOVES football?? I’m undecided on that. Here’s his latest tape from a game that took place couple weeks back:

In Penn State’s scheme, Robinson is asked to catch a lot of screen passes. But how the passes start hasn’t stopped him from finishing his receptions an average of 16.34 yards past the LOS (only 80th in the country, but the context explains part of why). More importantly, Robinson is 15th in receptions (38), 7th in yards (621), 13th in TD’s (5), and 1st in the country for catches of 40 yards or more. Explosivo. Robinson is currently charting at about mid-2nd round. Another "trade back, trade up, or hope he falls" kinda guy.

Whereas Robinson and Matthews may share the same size, Robinson’s game looks more similar to our next WR: Paul Richardson of Colorado. I think I’ve written on him before too, unfortunately I don’t have new tape on him. But we can update his stats: 2nd in the country in yards per game, tied with Robinson at 7th in receiving yards, 15th overall in YPC (20.03), and tied with Robinson again in TD’s (5). The big difference between Rob and Rich is the size, with Richardson clocking a svelte 6’1"/170. Injury concerns are gonna persist on Richardson if he can’t thicken up and show he can take NFL contact on a weekly basis. But in college his size has kept him quick, and quick has allowed Paul to be the most productive receiver on passes of 50 yards or more. Actually he’s even got a couple catches over 70 yards.

Staying in the Pac-12, we can next look a few miles to the south at Oregon State’s Brandin Cooks. Cooks is not the type of WR I think the Hawks will be looking for. Brandin is a version of what we already have in droves. Cooks is 5’10"/186 with 4.50 speed. But Brandin Cooks is leading the world in receiving.

Receptions: 52 (1st). Yards: 807 (1st). TD’s: 9 (1st). It’s a triple crown. And we’ll throw in rec/gm, yards/gm, and 40+yd receptions…all 1sts. What does it all mean? Could mean many things, but one possibility is that Cooks is this year’s Stedman Bailey. Bailey is 5’10"/195 and finished 2012 top 3 in all of the same categories Cooks is currently leading. What’d it make Bailey? A 3rd-round pick that has zero catches on one target through 5 games in the pros. Or he could be Steve Smith. I don’t have any kind of feel for this one:

At this point I am starting to gas, and there are still a couple more WR I’d like to talk about. I’ll just mention some basics on a few guys, and then close with one more intriguing draft option.

Devante Parker of Louisville: 6’2"/209, 17.86ypc on the year with 6 TD catching passes from Teddy Bridgewater.

Jared Abbrederis of Wisconsin: 6’2"/190 and featured in last week’s Gems.

Okay, let’s bring it on home. Literally. A WR found in the Seahawks’ own backyard: UW’s Kasen Williams. This is a great week to finally be talking about our KW after the way he played so valiantly against Stanford. Let’s face it…UW is a running team right now. Bishop Sankey is carrying some damn mail. The action/reaction of that is none of the UW receivers are getting touches, nor having noteworthy years. ASJ and Kasen are both seeing less targets in favor of running the ball. Even when they do throw, Keith Price now has a half dozen worthy pass-catchers in Smith, Ross, Mickens, ASJ, Williams, and even Sankey out of the backfield.

I’ll spare you the details of Kasen’s so-so statline in favor of talking about what he is as a receiver. He is a rather thick 6’2"/212 with long arms and awesome track and field background. We’re talking sprints and jumps. I don’t know that Williams blows me away with his elusiveness in RAC. You know how they say some RB are a one-cut and go type? Williams is that at WR. He wants to catch the ball, make one jump-cut or spin, and kick on the afterburners. But that can work. 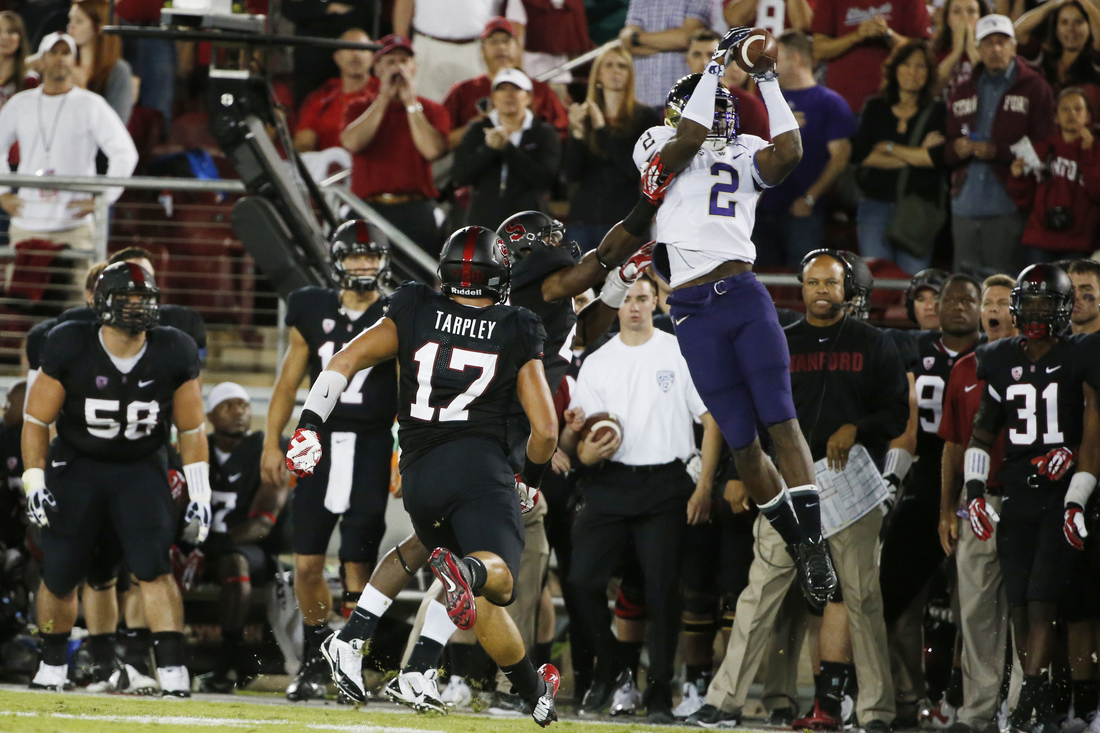 What I really liked from Kasen vs Stanford was the way he owned the redline in the 4th quarter. I could picture RW throwing him backshoulder lasers all day. But I’m not sure Kasen is what the Seahawks need. Kasen is kind of Hakeem Nicks. We need Demaryius Thomas.

Demaryius Thomas is Jordan Matthews. Damnit…back to where I started. What could that possibly mean?