A look at college cornerbacks with that Seahawk look about them.

As is generally the case when I sit down to write the Gems, this week my focus has been dictated by news in and around the Hawks. Pete Carroll announced Monday that CB Brandon Browner will be out from 4-6 weeks (aka 3-5 games) with his groin injury. This could put him on the shelf for the remainder of the regular season. Then, today, it was revealed that DE Greg Scruggs and CB Tharold Simon have been moved from the PUP list to "returned to practice" status. I believe these moves were forced because we have reached the "fish or cut bait" point of the PUP rules where players must be activated or IR’d.

What follows is a grace period where the players have a roster exemption for X-weeks (three, I think) wherein they can practice without being on the 53-man roster. Basically, a day or two before the New Orleans game, PCJS are going to face a decision of whether to IR Simon or Browner. If Simon isn’t added to the 53 or IR’d, he becomes eligible for waiver claims by other teams. If the team feels comfortable with the current depth (WT3/Maxwell/Lane); depth that has never seen a loss in any game Browner has missed in the last two years; and maintain the pattern they’ve established of giving young players with years of control a shot over experience, then they give Simon the roster spot. If they don’t want to eliminate the possibility of having Browner available for the playoffs, then they IR Simon. 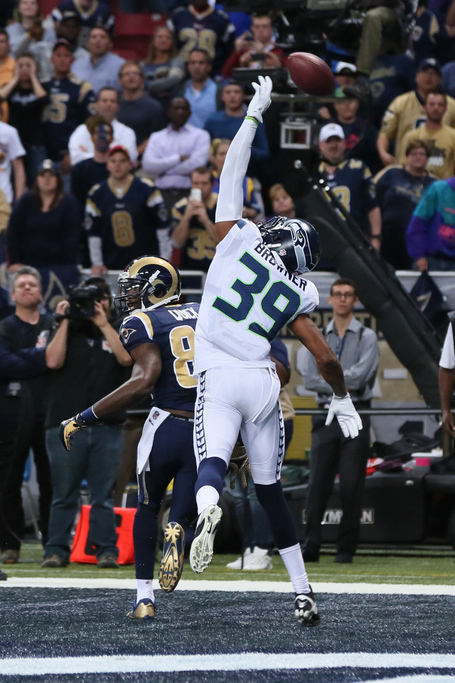 My hunch is that we’re going to trust in WT3/Max, and be seeing Simon activated with Browner to IR. Why? Because the secondary play has never shown signs of significant dropoff in Browner’s absence, and his placement on IR could lower his stock as he heads into free agency this offseason. I’m not sure how interested the Hawks will be in re-signing Browner; they likely may prefer to throw his money towards Thurmond (also a FA)…regardless, any degree of an injured or injury-prone label that can be applied to BB probably makes him an easier sign here in Seattle.

In the meantime, it’s very much in John Schneider’s repertoire to hedge all of his bets and negotiations in the draft. With two CB headed to FA, and a third yet to see a snap as a Hawk, it is time to scour college football for that next, hopefully late-round, great corner.

With only one of five active CB (1 of 8 if you include IR/PS/PUP) registering in the 5’11" under club (WT3), this is the category that feels the least appealing to this regime. As such, I’m not going to spend as much time on the college players of this stature. There are great college corners under 5’11" (in fact, the concensus top 3 or 4 CB prospects are all under 6’), but since CB isn’t the kind of "need" position that both O-line and D-line are, we’ll be looking for a guy closer to the 4-6th round range.

I recently began plugging names and numbers into the same defensive production matrix I first used, and wrote of, last year. To my surprise, the top performer through roughly 10 weeks of CFB, was not Ekpre-Olomu or Verrett or Roby…it was San Jose State’s Bene Benwikere. I have yet to study Bene’s 2013 tape, but I did revisit his 2012 tape and it was thoroughly unimpressive. He currently has a draftscout ranking of 151st overall, corresponding to 4-5th round range. I don’t think I become interested in him until he falls into the 6th.

If we’re talking sub-5’11" CB in the 4th-round range, I think I’d prefer Oregon State’s Rashaad Reynolds. I can remember last year watching tape on Jordan Poyer, and every tape I watched my eye would always start to wander to Poyer’s counterpart in the OSU secondary: Reynolds. In addition to both coming from Oregon schools, at 5’11"/187, Reynolds is almost the exact same size as Thurmond. For the year Reynolds has 5 INT (t-7th in the country), 3 PBU, 44 tackles, and 2 forced fumbles. Here’s a tape of Reynolds from last year where he goes up against BYU and their two big WR (Hoffman-6’4" and Apo-6’3"):

I think the Thurm resemblance continues with his play. So if Thurm walks in free agency, don’t be shocked if JS pulls the trigger on a guy that can play outside CB against big WR, and then rotate in to nickel in certain game situations, like Reynolds.

If the idea is for a bit stouter 5’11" player that will likely simply stay outside for all three downs; I’m kinda liking Iowa’s BJ Lowery. I’ve been noticing Lowery’s name climbing the national leaderboard for CB’s thanks to his 3 INT, 13 PBU, and 3 FF. He also has a pretty significant 50 tackles from the corner spot. This week draftbreakdown.com put up his game against Wisconsin.

Stripping the ball from Melvin Gordon who never fumbles: check. Tracking notorious precision route-runner Jared Abbrederis: check. Open-field tackling Gordon: check. I have a thing for DB’s that can tackle. More importantly, I cannot stand a DB who misses tackles. I like Lowery in that regard. Of the corners I ran through the matrix, Lowery was 2nd in tackles to Ekpre-Olomu. Did I mention that Lowery is getting no draft buzz and currently ranks 454th on draftscout's overall rankings? Could be suffering a similar disconnect to the one that yielded fellow Hawkeye Micah Hyde no love, but an eventual 5th round selection by the Packers. Hyde only had 1 INT, 2 FF, and 14 PBU in 12 games last year.

And on that note, let’s move up to the 6’0"-6’1" classification…where current Hawks Byron Maxwell, Jeremy Lane, and the IR’d Chandler Fenner measure out. This is where we start to find the guys that feel more Seahawky. I’m going to forsake the CB’s in the first three rounds like Fuller, Gilbert, Purifoy, Roberson, and focus more on the 4th back.

For most of last year, I was a huge advocate of Duke’s Ross Cockrell. At 6’0"/190 has the exact same ht/wt measurements of Jeremy Lane. And honestly, Cockrell is like the yin to Lane’s yang…only without sounding dirty. Where Cockrell lacks in straight line speed, Lane is exceptional; and where Lane could use more technique in his cover skills, Cockrell is one of the best I’ve seen in CFB.

I had somewhat lost track of Cockrell this year; he wasn’t having the top-10 producing season he had put up last year. But then, about three weeks ago, his name popped up on highlight shows after he picked off Logan Thomas in the endzone. It was a huge play for Duke, but Cockrell appeared to go shin to shin with his own teammate and came up hobbled. The following week Cockrell didn’t play against NC State. Then last Saturday, Cockrell probably begged his coaches to let him play, even though he’s clearly not 100% healthy, for a big game against a ranked Miami team. It’s about as Willis Reed as a college football player gets:

Cockrell’s final line for the Miami game: 1 tackle, 5 passes broken up. Against the touted Stephen Morris and the #23-ranked Hurricanes. Cockrell can clearly be seen limping throughout the game…in part because Miami is obviously/intentionally having their players chop-block Cockrell right to his injured leg at least three times in the game. Is that a sign of respect? As dirty as it is, I guess it might be.

Prior to the Miami game, it was pretty tough to get any kind of feel for what Cockrell has been up to this year. Very little season production: 2 INT, 10 PBU (only 5 prior to Miami), 2 TFL, 1 sack, 34 tackles. BUT…when it comes to CB, sometimes low stats simply mean teams are throwing away from you. This tape being my first look at Cockrell this year is pretty damn compelling. Draftscout has him at #144 overall, which would be very reachable for the Hawks 5th-round pick from Oakland. Having done a lot of research on his character, intelligence, leadership intangibles last year, and revisiting them this week, I’m very impressed with him off the field. If he doesn’t make it in the NFL as a player, he will coach. Pretty confident of that.

My only question is: can Cockrell continue to grow and improve his press coverage and gain some more boom. Basically, if you saw the recent Ronde Barber interview with the LOB, it’s a similar growth cycle to the one Richard Sherman had once in the Legion.

Other mid-sized CB that are intriguing, but without complete study:

SMU’s Kenneth Acker – a Portland, OR native that ranks 14th in the country in total passes defended.

Texas’ Carrington Byndom – comes from DB-U, and I had some hope for him last year, but this year’s tape disappoints. Maybe a 7th-round flyer.

Finally, we get to the big boys. I’ve already highlighted a couple of the biggest boys in previous editions of Gems (Dontae Johnson and Stanley Jean-Baptiste), and both have really fallen out of interest for me. The latest name to join the ranks is Utah’s Keith McGill. Listed at 6’3"/205, McGill’s game reminds me more of Browner’s play than either of the other bigs. And yet, I was pretty disappointed. Does this mean that, outside of the rose-colored glasses of homerism, Browner isn’t that good? Maybe. It could also mean that McGill would be better under PC’s supervision than he is at Utah. Take a look at 6’3" McGill versus the 6’4" Cody Hoffman:

At the moment McGill looks available in the 6th round.

Before I go, I just have to share a couple more videos. One is a player we’ve talked about before with an update, the second is brand new to my eyes.

We talked a few weeks ago about Louisville safety Calvin Pryor…there was some uncertainty then about whether or not he’d even be available in this draft…well this week, Tony Pauline is reporting that Pryor is leaning toward declaring. If true, I think Pryor is the best safety prospect in the class. Even over Ha-Ha.

And at the complete opposite side of the football weight spectrum from CB’s is this massive DT from LaTech. His name is Justin Ellis, he doesn’t have much in the way of stats, and this could very well be the best game he’s ever played, but it got my attention. Listed at 6’2"/357, this is a BIG boy doing work:

Kinda reminds me of Vince Wilfork. If Hawks are in the nose-tackle business next April…knowing Mebane’s price tag; they may need to be…Ellis and Ryan Carrethers are pretty interesting looking options after the 3rd round (Ellis projecting UDFA at #370 overall).