Share All sharing options for: 8 Advanced Things About Eli Manning

Two years ago, when I was literally just starting at Field Gulls, I decided to start a feature that would give fans a preview of their upcoming opponent while also borrowing from a concept from a popular John Ritter vehicle. "Twelve's Company"? No, that was someone else. "Problem Children"? No, not that either.

"John Ritter has passed away and I'm really sad about it but let's try and focus on other things that make us sad like the fact that the New York Giants have won two recent Super Bowls despite subpar regular season performances and a QB that might go to the Hall of Fame despite posting mostly mediocre seasons throughout his career"?

Yes. Well, not exactly. Danny wouldn't allow such a title and at the time, the Giants had not yet won that second Super Bowl with Eli Manning, so I just cut it down to: "8 Simple Things About Eli Manning"

That's when I found out what it was really like to write for the internet. Sometimes. Actually, nothing I have done in the two years since has really quite hit on the same level as that Eli article, at least not as far as inciting riots across SB Nation goes, and who knows if anything ever will again.

But we can try, right?

Readers at Big Blue View do not care for me, so what more harm could be done? Besides, my article put a spark under Eli that fueled him to the best season of his career and a second ring, so was it really all that bad, Giants fans? Now that we know you aren't going to the playoffs this season, you surely can't do any more damage to us. Well, unless you win on Sunday.

However, you didn't win that game against Seattle in 2011, despite being heavy favorites, before the Seahawks had really found their proper wings with Pete Carroll, and I have faith this team to not lose it now. Not now that they've advanced to the upper echelon of the NFL, not with Russell Wilson, not with this defense, and not... with this year's version of Eli.

After coming into the season with high expectations, New York lost their first six games of the year and find themselves mathematically eliminated from the playoff races. In large part due to turnovers, mostly turnovers generated by Manning.

Seattle has improved as a team over the past two years but I've also tried to graduate to a different level of writing, or at least, in looking deeper at the numbers. I don't write "8 Simple Things" anymore, and I'm not going to make an exception just because we're playing the Giants.

But I will give you Eight ADVANCED Things that you may, or may not, know about Eli Manning.

Did Archie Manning tell you that you were intentionally grounded?

One can only imagine what Christmas is like at the Manning household every year, but I think we can all agree that Cooper Manning will get nothing and like it. "Dad, I flipped this oil stock for a 500% profit!!"

"Cooper, shut the heck up and open Eli's presents for him. You know his fingers are sensitive, boy!"

But even Eli probably gets grounded sometimes, especially when he messes up on the football field. Which means he probably hasn't been able to go to many Saturday night parties in his life.

According to NFLPenalties.com, Manning has been flagged for intentional grounding five times this year. No other quarterback in the NFL has more than two such penalties. Manning led the NFL with five such penalties in 2011 as well, giving him 12 over the past three seasons.

It's hard to know for sure if Eli was a good student, but I can tell you that if I was bred to be a quarterback I probably wouldn't have studied at all. I mean, I wasn't bred to be anything -- more like I was fed to be eaten one day, am I right? Huh? And even without a bright future, I still didn't learn much!

The total value of Manning's contract ($97.5 million) is the sixth-highest in the NFL.

The average annual value ($16.25 million) is the eighth-highest.

The guaranteed money ($35 million) is the eighth-highest.

His Defense-Adjusted Yards Above Replacement per Football Outsiders? This year, he's 38th. Behind players such as Chad Henne, Kellen Clemens, Thad Lewis, Christian Ponder, Matt McGloin.. Hell, can I just point out that there aren't 38 teams?

At -196 DYAR, Manning ranks just above players like EJ Manuel, Josh Freeman, Matt Flynn and a few others. However, he hasn't always been that bad. Manning was 10th in DYAR last season and eighth the year before and he's been in the top 15 for every season since 2008. In 2007 he was 40th in that category but he's been an above-average statistical quarterback ever since, that is until this season.

Whether or not he is as good as Giants fans make him out to be, well, that's a matter of perspective.

The only response we get to hear when trying to "bring up Eli Manning's numbers as some sort of way to evaluate him": De-Eli With It

As Grantland put it two months ago:

Or there are the many other faces of Eli. It's a Face-Off with Eli: 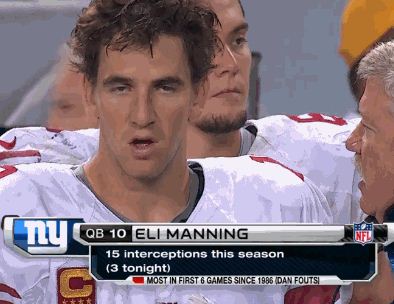 The full article, detailing every face that Manning made after his first 15 interceptions of the season. 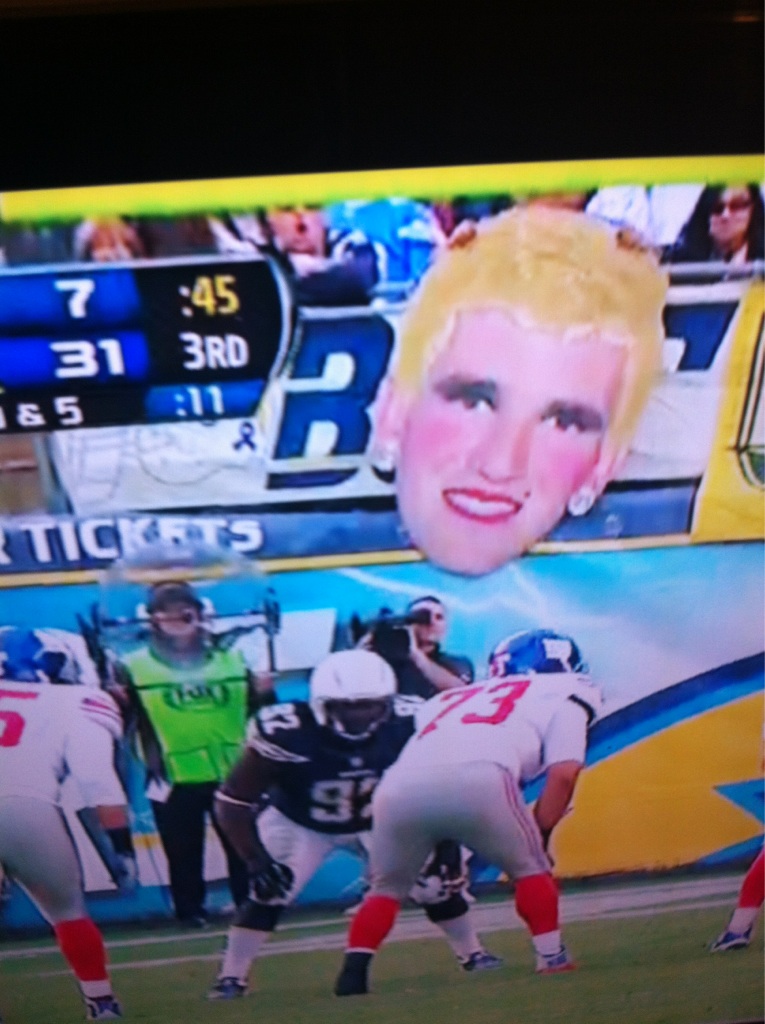 And 15 more faces of Eli Manning and his wide range of emotions. Speaking of a lot of interceptions...

Finish your chores or no big apple turnover for dessert!

Someone might even say that "Eli is like one of those old school quarterbacks. George Blanda, Dan Fouts or Joe Namath. When men were men!" and when men threw interceptions like nobody's business.

George Blanda, Dan Fouts, Joe Namath, Jack Kemp, Ken Stabler and Eddie LaBaron. Fouts is the only other player to do it since 1975. Manning truly does hearken back to the old old days.

These vagabond footballs, they're longing to stray

If I told you that one of those players was New York Jets QB Geno Smith and that the other was New York Giants QB Eli Manning, you would probably accurately guess which is which. But isn't it at least a little bit appalling that the numbers are even similar? That it takes you a split-second (at least) to figure out which is which? Considering that Smith probably has no business starting in the NFL and is a rookie thrown into the fire of New Yorrrrrk, where concrete jungle dreams are made of or something?

Smith is the only QB in the entire NFL with a higher interception percentage this season than Manning.

A lot of people will point to poor pass protection for Eli behind a terrible offensive line as a big reason as to his struggles and his propensity to throw picks while under extraordinary amounts of duress. Manning has been "hit as he's thrown" three times this season (14th-most in NFL), been the victim of four dropped passes (23rd), and is "under pressure" on 40.2% of dropbacks. That's seventh in the NFL. Wilson is pressured on 44.1% of dropbacks, second in the NFL.

But it's not like we're just evaluating one season...

That's just Manning not being Manning

Since entering the NFL in 2004, Eli Manning has thrown 164 interceptions, the most in the NFL. You could even stretch it back to 2003 and he'd still have the most, just ahead of Drew Brees. (Actually, if you want a really accurate comparison to Manning, try Brett Favre. And by that I mean, look at Favre's career from 2002-2010. Young Eli Manning is basically an old Favre.)

Now, who do you think Archie is most proud of?

Why don't you have a seat over there?

A lot of Giants fans will argue that Manning's numbers don't accurately represent the kind of player he is and I think it's fair to say that sometimes that is true. Especially when you consider other factors that can negatively effect a quarterbacks stats, like dropped passes, being hit when you're throwing, throwaways, spikes, poor pass protection.

ProFootballFocus takes that into account and removes those types of passes from their stats as they put out the "PFF Rating" for quarterbacks, and Manning checks in at 80.39 on the year. That's 24th in the NFL and ranks him behind three QBs that have already been benched this year: Brandon Weeden, Christian Ponder and Robert Griffin III. It places him just ahead of Matt Schaub, Joe Flacco, Chad Henne, and EJ Manuel.

His "Accuracy Percentage" (completion% without drops, throwaways) ranks 27th in the NFL.

His accuracy on deep passes is 17th.

Whether it's eight simple things or eight that are a bit more complicated, the stats still don't lie: Two championships- Aw fuck!