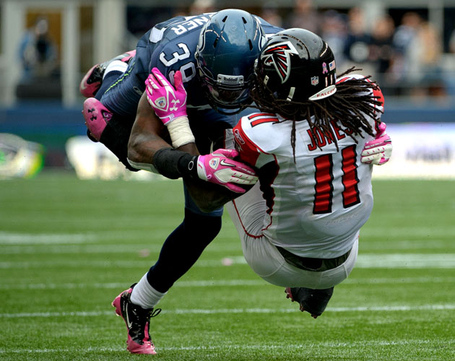 One under-discussed (ie, not at all) aspect of the Brandon Browner suspension situation is whether, or to what extent, the Seahawks knew of his status in the substance abuse program when initially signing him in 2011, or during any subsequent contract talks.

Setting aside the legal basis or fairness thereof (or, you know, feel free to justifiably bash away in the comments), the NFL claims Browner was actually suspended when the Seahawks signed him, and then officially downgraded to Stage Three upon their realizing the oversight. We know Browner says he was oblivious to his status while out of the NFL, though who should bear the responsibility for that is a matter yet to be determined by some future legal proceedings. The NFL and Seahawks organization, however, have been strangely mute on the matter of who knew what when.

The obvious question is whether the Seahawks were informed of his initial supposed-status of suspended, or if/when they were told of his later-determined Stage Three status. This would have been highly relevant to them in signing him initially, continuing to employ and pay him, and restructuring his deal in 2013 to include a signing bonus and additional roster bonus on top of base salary.

If the answers involve any delay or omission of this information, it seems the Seahawks would have grounds for action against the NFL for, at the very least, some recovery of contract monies. The market for good players is evidently lowered if they're anywhere near their last chance - see Josh Gordon's lack of trade interest this year as exhibit A, despite his blossoming into a franchise wide receiver. Yes, the Browns wanted a first rounder for him, and yes, he is worth that. But also yes, they did put him on the market despite claims to the contrary, and no, they did not get such an offer for him. And that's the point.

Is it folly to imagine a team might sue the league? Owner Paul Allen may be loath to do so, given his vast wealth. But GM John Schneider (and close partner-in-crime coach Pete Carroll, though he has no official role in personnel management) is just the sort of outside-the-box thinker to consider such an action.

It is noteworthy that the financial stakes are relatively low here, given the absolute bargain-bin price the Seahawks have been paying for a Pro Bowl cornerback. For 2013, Browner is the 4th-cheapest player on the roster (!!!). If this involved someone like, say, Percy Harvin or Russell Okung you can bet your biscuits there would be some handwringing over the money involved, not to mention suit-filing.

The finer legal aspects escape me, as I'm not a lawyer, but it is at least an interesting opportunity to examine the obligations and culpability of the NFL as a party to this mess. Attorney 12s, your insight on the legal possibilities would be welcome. Schmoes, speculate wildly as you wish!