Our Team, Our Town

As many around the country prepare to tune in to see the Seahawks and Saints meet for the first time since the 2010 playoffs, let me take a moment to remind them about our town.

Share All sharing options for: Our Team, Our Town

Our Team, a Play in Three Acts

Characters (in order of importance)

Yeah, apparently a defensive coordinator is that important

The entire play takes place in the town of Seattle, Washington

The audience begins to turn on their television sets around the world. Presently, Kenneth Arthur, the author of this play, enters stage left under the single light that illuminates section 109 on the 50-yard line. He's wearing a Lofa Tatupu jersey, adorned in chili stains, holding a $10 Coors Light and a $9 pretzel.

At home, viewers turn down their lights and turn up the volume, as Kenneth begins to speak.

Hello. This play is called Our Team. It was written by me, Kenneth Arthur; well, technically it's a parody of a play written by Thornton Wilder and I just changed the words around to fit what I was trying to do. Sort of like tracing a Norman Rockwell and hanging it up on your fridge, except now instead of eating turkey the family is playing Call of Duty: Ghosts. Now available at your local Game Stop. (pre-order now for a special certificate of authentic virginity!)

The name of this town is Seattle, Washington -- just across the Canadian border; don't worry, still far enough to not have anything in common with those weirdos. The first act shows one day in our town. A day with our team. The day is January 8, 2011. The time is late evening.

This day is not today, but instead a day that lives in infamy. The sky is getting dark as the sun sets behind our mount'in.

The evening star always shines brightest in the twilight of a memory that never fades, doesn't it?

He watches the play for the 1000th time.

Well, I better show you how our play lies. Up here --

He brings up a diagram 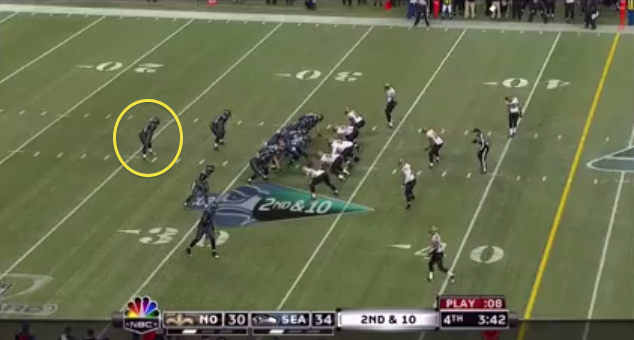 Just beyond the stadium walls of ole CenturyLink are the railroad tracks. In a moment, Lynch will be standing on the tracks after he bursts through the concrete of the stadium, and then stops an oncoming train carrying 5000 tons of salmon to Pike Place Market. If you're unfamiliar with Pike Place, don't worry; they'll show it on the broadcast about nineteen times tonight. 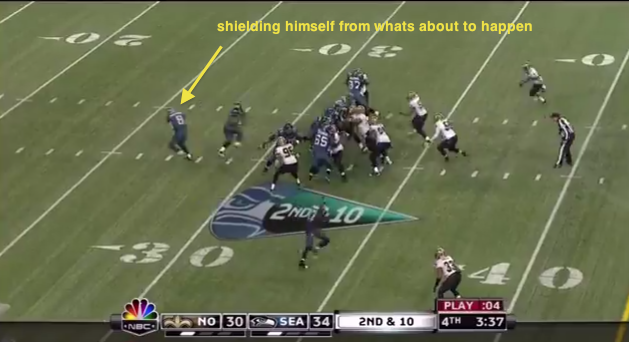 Over there is "Crazy old man Hasselbeck," pay him no mind. Legend says he once snatched a deadly rattler with his bare hands, saved a schoolbus full of children, but wadn't no real rattler. He would never tell you that though, and I think it's best sometimes to let legends be.

Not even crazy man Hasselbeck was cookoo enough to get in the way of Mr. Lynch when he got angry.

Some say he went missin' right there in the pile, thought he mighta been swallowed up by the ground itself. But in reality, 'twas the turf that would be swallowed. 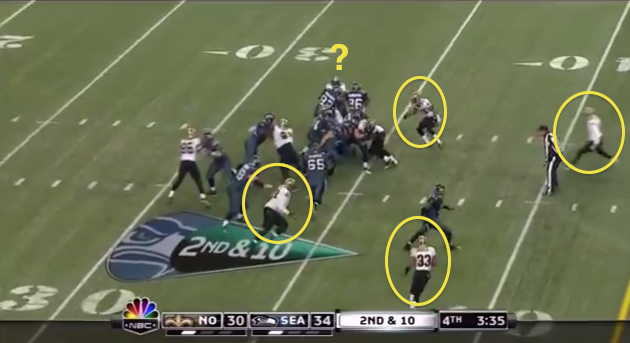 The others just waited around, not sure what was going to happen next. They didn't know if they'd ever see Mr. Lynch again. Not Mr. Harper, not principal Porter ('course he wasn't a real principal, but the town folk called him that on account of he was taken to school.)

No, they all just waited... until it was too late. 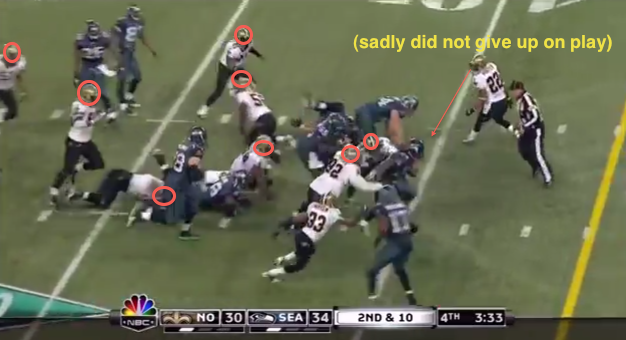 Here's a place to get pizza or garlic fries; jails in the basement for rowdy fans or players that test positive. It's full at the moment.

Up these steps, some great men once raised the 12th Man flag. Macklemore too.

Along here is a row of bathrooms. They don't smell good and the lines are long, but if you get drunk enough you won't mind eating your hot dog as you stand over the urinal. Just make sure to remember which is which that you've got in each hand.

Up there behind the glass is Paul Allen, our richest citizen. Made a fortune with the company Microsoft, which, in this world, are miniature, fuzzy blankets. But mmm, so cozy and soft! But was it a monopoly of miniature blankies? 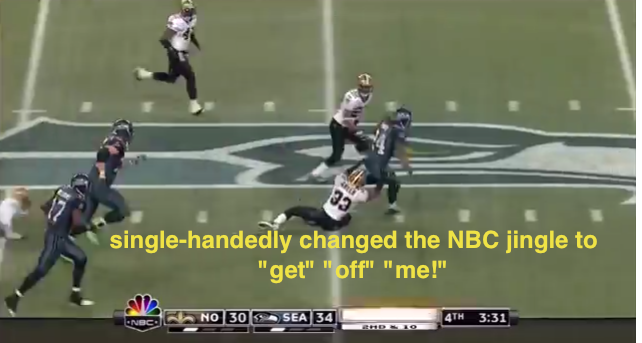 It was at this time that the broadcast booth said ^^^ "okay flip that "2nd & 10" sign ^^^ because clearly we won't be needing that anymore. 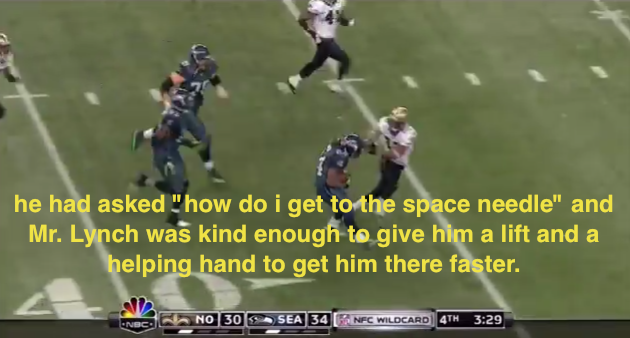 Here is the church, and there is the steeple, if you get in my way, "get off me" people.

Of course, time's change and people pass on or move away. That was the last time we had ever heard from principal Porter, Mr Harper, or the fireman Sharper. 'Course, he wadn't really a fireman. We just called him that on account of how badly he was burnt that day.

But there's plenty of room to roam here in Seattle once you get the lay of the land. 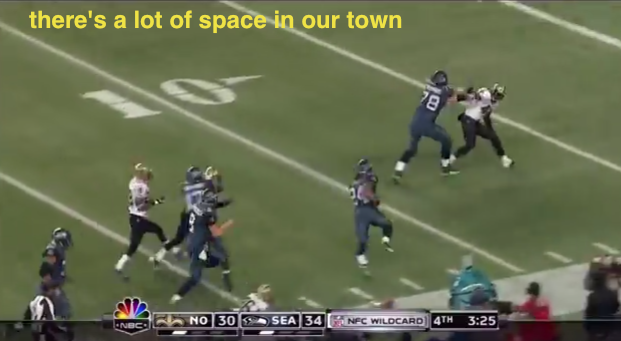 Arthur walks over to the end zone, hovering just around the edges but being sure not to cross over the chalky, white line onto sacred ground.

Best not go in there unless you is invited. 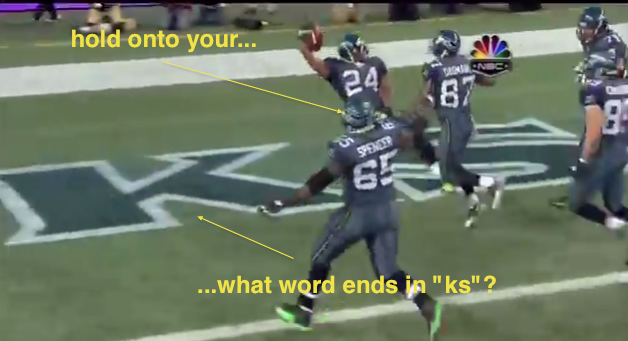 Of course, Mr Lynch is a bit of a rabblerouser. You could sort of call this place his "garden."

spores...scores...doyourchores...and of course touchdowns. Yes, on some weekends you'll just see him in his garden all day long.

Now, back in those days, the newspaper would come out seven days a week. Two of 'em even. 'Course, nobody uses a "newspaper" anymore, those are long since dead. This is the house of the editor of the Seattle PI...

We see an abandoned mental institution.

But we look out for each other here in Seattle.

Nice town, y'know what I mean?

Nobody remarkable's ever come out of here, as far as the rest of the country knows. Unless you don't care for Rainn Wilson, Joel McHale, Ryan Stiles, Anna Faris, Adam West, Sir Mix-A-Lot, Bill Nye, Tom Skerritt... and that's just the original cast of Almost Live.

A train whistle is heard. Kenneth Arthur takes out his cell phone to check the time.

Well, that was then and this is now. It's just the wee hours of the morning here in little old Seattle, though the local Starbucks have already begun to fill up with consumers all the way from here to three blocks from here. Which if you do the math...

Well, we're not that small of a market after all. You just have to know where to look for us. We're in that little upper left corner of your map, tucked under Canada, and actually still quite far away from Alaska.

We've given you plenty; Grunge music, coffee, Modest Mouse grew up not too far from here. Once even donated an entire basketball team to Oklahoma City on account of how sad and pathetic everything was there and how nice everything was here. Figured we could help out a fledgling town, 'twas the least we could do.

Well, I s'pose the Mariners would've been the least we could do.

The mailman, Richard Sherman, who will intercept a package and deliver it back to you free of charge.

The priest, Michael Bennett. If he comes to see you, I'll pray for you.

Old Man Pete... well, he just sort of stands there on the corner shoutin' 'bout God knows what. He's harmless but we love him. He's ours, just like everybody else belongs to everybody else. That's how things are in our town. We look out for one another. We'll be here to grab you in victory and hold you up in defeat.

May not look like much to you, but it's something quite beautiful to all of us...

The light dims off of Kenneth Arthur as the stadium goes completely black. As black as the dead of night. As black as Candlestick Park on national television. Then the lights on the stadium come up and you can see it now, filled to the brim with the roaring 12th Man, as Mayor Wilson and the rest of the inhabitants of our town run out onto the field to begin Act 2. There they are...

Our Town play, page 1-7 for reference