A first look at notable late-round draft prospects from outside of the FBS.

We’re getting late in the college football season…only 14 games in all of FBS on the slate for this week, then bowl season…so it becomes a nice time to put together one of my favorite editions of the Gems: the small school’ers!

Around the time of last year’s draft, someone told me the statistic of how many FCS/Div2 players actually get drafted in an average year, and the number was pretty miniscule; like maybe 8 out of 256 (3%). I never confirmed the stat. BUT…in 2013, 31 players outside of the FBS had their names called. The earliest was Southeastern Louisiana’s CB Robert Alford at #28 of the 2nd round (#60 overall), and the list included: 9 offensive linemen (including Fat Rabbit…the DT-to-C convert), 8 defensive lineman, 6 secondary, 4 WR/TE, 1 QB, 1 LB, 1 RB, 1 P. Further; zero FCS players were drafted on day 1 of the draft, 4 were drafted on day 2, and the remaining 27 were drafted on day 3; with a not-too-surprising 45% of the total FCS players drafted coming in the 7th round.

And so that's basically where this piece will focus: 2014 day 3 prospects, with emphasis on 6th and 7th rounders. We're not looking for starters. We're looking for role players with upside. This is a backup OT like Michael Bowie in the 7th, or special teams stud Jeremy Lane in the 6th, or a TE3 like Anthony McCoy also in the 6th. JR Sweezy is a starter that came out of the 7th, but many would debate whether he should be, or will be for long.

Keep your expectations low here. Hope for the best, but plan for these guys not to even make the team next summer. Of the 15 players chosen either 6th or 7th round in the John Schneider era, four came from small schools; including three last year, 33% of the 15 are already off the team entirely, another 20% are on IR/PUP, and 13% are on the practice squad rotisserie. A total of two-thirds of the 6th-7th round picks of the last four years are not currently playing an active role on the team. These are ALL lottery tickets. 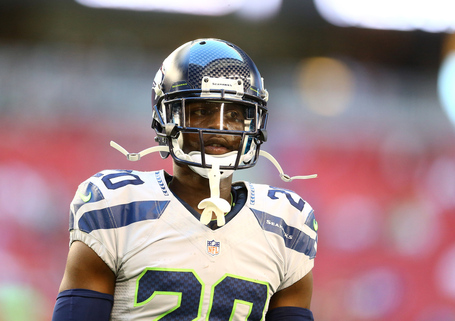 As I’ve done my research for this piece, the picture of which positions seem the best candidates for success coming from small schools begins to clarify. Secondary and O-line seem to be the areas where small school guys are drafted the highest most often; as evidenced by guys like Alford and Terron Armstead last year, Amini Silatolu and Trumaine Johnson in 2012, Benjamin Ijalana and Will Rackley in 2011, etc.

In 2014 projections, we don't really see any small school names until QB Jimmy Garoppolo in the 3rd round, but shortly after him we find Lindenwood CB Pierre Desir, and, although many national outlets aren't mocking him that early, North Dakota State OT Billy Turner will likely end up drafted 2nd-3rd round as well. I think all three of those players are very deserving of that small school, early round buzz. And I think that CB and OL are good places to find those small school gems late, as well. My 3rd favorite small-school targets would be the WR group.

As I pointed out earlier, WR is sort of the 4th most frequently drafted position group for small schools. I’m guessing part of the reason there aren’t more WR drafted is because many teams look to sign WR as high-priority UDFA. It’s a pretty solid strategy (see Doug Baldwin, Victor Cruz, Jermaine Kearse, etc). There always seem to be a handful of WR that have solid stats, great measurables, and exceptional pro-days, that make for great late-round fliers.

There are a couple small school WR getting attention that I will pass over; these are the smaller, slot types like Robert Herron of Wyoming or Erik Lora of E. Illinois. Much like I’m doing for the early rounds of the draft, in the late rounds I’m trying to find a big target. The first WR I will talk about is Tennessee-Martin’s Jeremy Butler. Starting at a really nice size: 6’2"/208, Butler has had an impressive 2013 season; catching 90 balls for 1203 yards (13.4YPC) and 10 TD’s. Those numbers would be top-15 in the FBS; ahead of names like Jarvis Landry and Jared Abbrederis.

On tape, Butler actually reminds me a little of Landry. He has great hands, good-but-not-great run after catch ability, and runs a really clean route. There is a bit more strength in Butler than Landry though (that extra 13 lbs helps). The other two things I’m really trying to focus on in the WR’s I’m scouting this year: can he win balls in the air (either by out-leaping or out-muscling), and does he win the redline. I like Butler in both cases.

Unfortunately, the tape I'm scouting from is a highlight reel and not a single game. But the tape showcases the entire route tree, highpointing, yards-after-contact...it's enough to put him on the high end (6th round) of this group, which is far more favorable than the #817th overall ranking given to him by nfldraftscout.com:

Another WR I found that I like is a guy named Matt Hazel from Coastal Carolina. Listed at 6’2"/190, Hazel carries a higher ranking from draftscout than Butler (265th overall), but whom I would personally rate lower than Butler. I don’t see Hazel as consistent with his hand technique as Butler, and there are lapses in effort, but he does show higher development as a route-runner and run-blocker; both of which Hazel looks to be great at when he applies himself. On Hazel’s route-running, I kept thinking of the line by/about Doug Baldwin: "that’s not separation, that’s a divorce."

Hazel’s QB really should look his way more often. For the year, Hazel ended up at 58 catches for 881 yards (15.2ypc) and 8 TD’s; all numbers good enough to lead his team, but that don’t feel dominant enough to translate from FCS to NFL.

On the opposite side of the ball, I like a couple of the small school CB enough to give them a look before Mr. Irrelevant (actually, until compensatory picks are announced, the Seahawks kinda do currently own the Mr. Irrelevant pick…). The first that caught my eye was Jackson State’s Qua Cox. Listed between 5’10"-6’0" and 185-190lbs, Cox impresses me less with his measurables than he does with his swag. He looks pissed off, he plays pissed off…in a weird way, his persona kinda reminds me of the DB version of Steve Smith.

On top of the swag, Cox caught my eye with his footwork and the way he closes on receivers. Those aspects remind me of a poor-man’s Jason Verrett.

In 10 games in 2013, Cox had 28 tackles and 5 pass breakups…not that exciting. But in 2012, Cox led the SWAC in INT with 5 and 13 total passes defended. Chances are opposing QB’s looked at the film and stopped throwing at him this year. In addition to his footwork and click-and-close, Cox shows very sound fundamentals in his tackling; all very good attributes for a nickel corner. Draftscout projects Cox at #624 overall.

On the O-line, Furman’s Dakota Dozier is getting some attention recently. Listed at 6’4"/291, Dozier has spent time playing LT for Furman, but most believe, at that size, he’ll have to move inside to OG at the next level. Going by Seahawk tendencies, I’d have to guess he’d be looked at primarily at RG. The footwork is really nice and he certainly shows enough athleticism when pulling to give Sweezy a run for his money next year.

Draftscout has him at a respectable #281 overall, and in most other years he might earn a 6th-round grade, but with the depth in this year’s O-line group, I’d hold off till the 7th on Dozier. And that's only if the Hawks haven't gone 2-deep on OL before the 7th.

There are a few other players from small schools that are getting lowkey draft buzz but that I’m not as fond of. One is a DE from West Texas A&M named Ethan Westbrooks. Listed at 6’4"/275, he reminds me somewhat of Armonty Bryant. The stats are eye-popping:

Unfortunately, like Bryant, I’m worried about Westbrooks character. Draftscout has him ranked #313 overall, and normally I’d say character concerns aren’t THAT concerning with a 7th round pick (far too easy to cut them), but do the Hawks REALLY want to risk more bad PR by drafting another problem child?! Not sure. Here is Westbrooks from his dominant 2012 season:

Lastly, is an OLB/DE from South Dakota named Tyler Starr. Standing 6’4"/248, he has a blend of Urlacher and Clay Matthews physically, but I just find his tape a bit awkward. There seems to be a lack of great instinct and poor line choice when attacking ball carriers:

I had a few more prospects I wanted to have ready for scouting reports, but they honestly didn’t have any film for review yet. We may revisit again after combine/pro-days to see if we have any new names to add. In the meantime, I really like the idea of Qua Cox in the 6th round, and also keeping the WR I've mentioned in the back of my mind as fail-safes in case Hawks don't grab one in the first 4 rounds.