When I was young I loved the pass. It was the late eighties in San Francisco and we played Joe Montana versus the Indians during recess. Don’t get me wrong, Roger Craig was probably awesome, but I had my doubts that he could kill a menacing brave with a 90 yard bomb on a tight spiral.

A little later I moved to Seattle and, in that fickle way that kids do when all the people they want to be friends with are cheering for the other guys, I adopted the local teams. It was good though because my sporting tastes matured. I learned that there are all kinds of losses. Some can be appreciated like a well roasted black coffee, bitter but enlivening. Others make you feel terrible - well they make you want to drink but I didn’t know that then. But they make you appreciate winning at an age where it is easy to take it for granted.

It helped that Ricky Watters was playing for Seahawks in 1998. I had vague memories of him mocking the need for the 49ers to even play postseason games in 1994 so he made a great player to latch onto. But Moon was still my guy. He threw the ball. Not spectacularly, and that season I did realize that not all QBs were Joe Montana or Steve Young, but a passing play was like a girl to me at that point. I knew it was very good but I couldn't quite articulate why.

I think I was close to truly appreciating the run in the 2005 season when Shaun Alexander almost accidentally won us the Super Bowl on his way to the end zone. I mean obviously that whole team was great but hey guys, remember in Shaun Alexander in 2005? How awesome was he? Too bad he retired instead of signing a new contract. I guess we just have to trust that he knew best.

Back in reality the post-Superbowl Alexander experience left me believing that the running game was cool but running backs were fungible. Sure, I liked the war in the trenches as much as the next guy but how could I love running as much as passing when play’s focus lacked the personal magic of a QB. The magical Mannings and Montanas who were irreplaceable (except by Steve Young) and incomparable (except by the stats).

But then Pete Carroll happened, well actually Beef Mo’ happened. He did it to me run by run but by the time the Beast Quake happened I knew I loved the run. I knew I’d seen something as magical, maybe more so, than The Catch that I grew up hearing about. And I knew that it’s beauty wasn’t lessened in comparison for being a rush.

I am absolutely certain that Marshawn Lynch could kill an indian brave from 90 yards away with just a stiff arm. I don’t even care how un-PC it is.

The change in my outlook on the game has had me thinking that I should objectively reevaluate some of my long held beliefs about the relative value of running and passing. In particular I was curious if I’ve been unfair to coaches when I curse them out for running on third and long.

996 passing plays (since 2010), 251 QB "rushes," and 444 non-QB rushing plays (since 2000). All occurred on 3rd down with >10 yds to go in the 1st and 3rd quarters with point differential sitting at 7 or less. The quarter and point restrictions were to try to get quality downs while the different times of the datasets was to make the rushing set significant without making me use a dataset of 4000 passing plays. I freely admit that the game has changed in the 2000-2012 time frame but no one is paying me to do this so I’ll use bad practices if I want to.

Most of the QB rushes were botched snaps out of shotgun. Most of the ones that weren’t looked to be the result of abortive passing plays. I went ahead and included them in the called passes set.

Between 2010 and 2012 coaches called a pass on 91% of the downs in the dataset. If you’re the defense on 3rd and >10 you can cheat pretty hard toward defending the pass and not expect to get burnt.

The runs got first down yardage 7% of the time while the pass succeeded 18%. The two aren’t necessarily equal since the pass comes with the risk of interception and botched snaps out of the shotgun. Taking those risks into account I calculated the expected point value of a called run and called pass to be .08 and .18 respectively.

What if you have a great RB and a terrible QB? What if you’re the Minnesota Vikings?

This chart shows the yardages achieved in called passes and called runs by frequency for the dataset. The big blip at zero for pass yardage is incompletions and botched snaps: 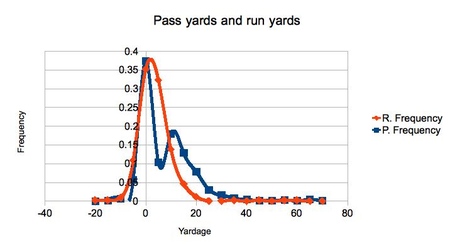 Last year the average RB got about 4 yards an attempt last season. The average yardage for a third and long rush in my dataset was 6.5. The running backs obviously don't just get better - it’s easier to rush when the defense has to key in on pass. So let’s get crazy here and assume that all rushers get a 1.6x bonus to average yardage in third and long. That means that an Adrian Peterson or CJ Spiller would average 9.75 yards on third and long. First of all that’s insane so I looked a little deeper: AD average 9 yards in six carries in the dataset, CJ had one carry for 8, and Marshawn Lynch averaged 22 yards over two carries. So I guess that doesn’t disprove the hypothesis.

So, if you have an elite RB getting 3.25 more yards per carry then the graph is going to look like this: 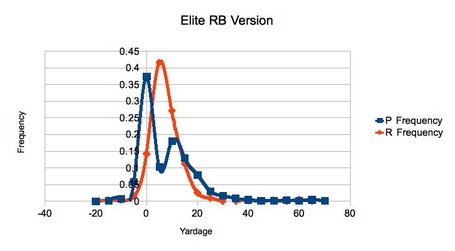 With the adjustment the success rate jumped from the average 7% to 11% and the expected point value of a run jumped from .08 to .16 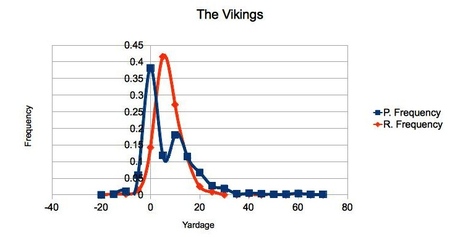 So finally, using the Christian Ponder adjusted success rate (and assuming that the QB is still average in botched snaps) the expected point value of a throw comes out to .15, .01 less than the run play!

If you’re the coach of the Bills or Vikings next season you should probably plan on putting a couple more runs into your long yardage packages. If you’re just a fan of the Seahawks feel free to revel in having the best offensive backfield in football.