I apologize for the delay on this blog, it has been 'finished' for a while, but a lot of good changes at my work have been consuming my time. Attached is a spreadsheet with Adjusted SPARQ calculations for existing Seahawks linebackers and LEOs. Please reference my previous post on how I calculate Adjusted SPARQ and what these scores indicate.

I also attached SPARQ numbers for ten of the top drafted linebackers (non 3-4 OLB type) in the 2013 Draft. As you can see, half of the draft linebackers have scores between 110 to 120. For the position group, I think that is pretty typical SPARQ score for a 4-3 type linebacker. Running back and Offensive Lineman scores likely have a different median/average score. 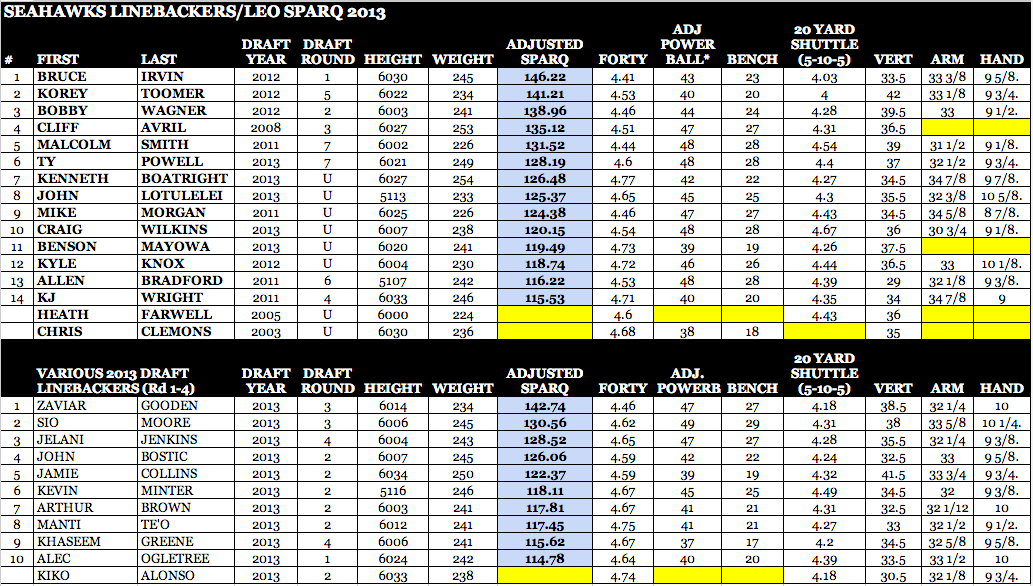 Calculated along with player weight, forty time, 20 yard shuttle (5-10-5) time, and vertical jump, the better of the player's Pro Day or Combine Number is used for this analysis. All Combine/Pro Day Numbers from NFL Draft Scout. Arm and Hand come from PFW, NFL.com, or CBS Sports.

On a sidenote - with advanced Combine training techniques, I think the year a player was drafted does make a difference in these scores, as players now professionally train for these Combine events in a way they did not do, for instance, 7 to 10 years ago.

Interestingly, before I did this SPARQ analysis, there were three intriguing 4-3 linebackers to my eye, mostly because of where they could be taken in the Draft (middle, rather than early). Zaviar Gooden had a very fast 40 time, so he caught my eye. Sio Moore gained a lot of buzz, he didn't have a blazing 40, but did have other strong athletic numbers (38 inch vert, 29 bench reps). Moore also seemed like a tough, physical player. The other player was Jelani Jenkins, more in my mind because I thought he could be had in the late 4th to 5th round and may have had a connection with Dan Quinn at Florida.

That being said, with Antoine Winfield and rumors of the SAM/WLB/LEO adjustments/hybrids before the draft, I suspected the WLB draft slot would fall closer to the bottom of the draft. Those three linebackers, notably, did have strong Adjusted SPARQ numbers.

Also, interestingly, Khaseem Greene fell to the 4th round. I liked him, but I suspected the Seahawks would pass on him due to his 40 time (4.67). I know that many writers really liked him and he showed great tape, but the speed thing red-flagged him to me, especially purchasing him in Round 2. Four other highly drafted 4-3 type linebackers had pretty average SPARQ scores (and I am not saying these guys are NOT the best players - I think they are the best players - but just pointing out their SPARQ scores): Alec Ogletree, Manti Te'o, Kevin Minter and Arthur Brown.

As for the Seahawks (and I threw in LEO SPARQ scores just for fun), you see a lot of above-average SPARQ scores. Interestingly, the lowest scoring linebacker is a very good player for the Seahawks, K.J. Wright. Wright was such a great draft pick in that he is big, long, has good instincts and intelligence, and is extremely versatile. Perhaps most importantly, Wright allowed the Seahawks to move on, financially and emotionally, from Aaron Curry.

What SPARQ does not measure is intelligence, competitiveness and arm length. Wright has all of these things, and is undoubtedly a better player than SPARQ-KING Korey Toomer - who is one of the most athletic linebackers in the NFL and did not make the Seahawks' Final 53 in 2012 (and wasn't claimed by anyone else, either).

More than anything, look at how low this group of Seahawks' linebackers were drafted. 8 of the 16 were never drafted. Only 3 of the 16 were drafted in the first three rounds (Cliff Avril, Bruce Irvin, Bobby Wagner - and I am throwing in the LEOs generously.) Outside of Jarvis Jones, the list of 2013 Draft Linebackers were the highest drafted linebackers in the Draft - so when you compare Draft positions between the Seahawks' list and the 2013 draft list, you can see that SPARQ score factors into the equation with the Seahawks' decision to build their their linebacker corps on mostly late round picks. The Seahawks linebackers have above-average SPARQ scores combined with below average Draft position.

Anything above 130 is a very high score. Anything above 120 is above average. Irvin (146), Toomer (141) and Wagner (139) are athletic studs. Freaks, really. All have good speed, and Wagner and Toomer had very good vertical jump numbers. Toomer and Irvin had very strong agility numbers (4.03 short shuttle for Irvin and a 4.00 for Toomer). Avril and Malcolm Smith also have strong scores. Mike Morgan's numbers are pretty solid as well. I suspect Benson Mayowa's numbers are actually closer to Kenneth Boatright's, and I read somewhere that he ran a better 40 time at the VMAC tryout than his "official" 40 number.

Lastly, as Danny pointed out in this recent blog, John Lotulelei and Craig Wilkins have very good athletic numbers. The only knock on Wilkins would be his agility scores (and arm length). The only knock on Lotulelei would be straight line speed. All of the rest of Lotulelei's numbers are good, and I can understand why he had a draftable grade, as per John Schneider. Probably the main detractors for him were his height (below 6 feet), speed, and the fact that he was a JUCO transfer - but he does have long arms, big hands and explosiveness.

Up next, Danny Kelly will break down Adjusted SPARQ scores on Seahawks Tight Ends and other notable 2013 Draft and NFL Tight Ends.

Looking back at Seattle's Week 1 loss to Arizona

What does Antoine Winfield do for the Seattle defense?

How DangeRuss is the QB rush?