Russell Wilson can’t get hurt. He can’t get hurt in the same way that a boy’s dog can’t get rabies making the boy go out back and shoot it. It doesn’t seem fair when it happens, it doesn’t seem right, it seems capricious of fate and desperately cruel. If Russell Wilson got hurt in a book it would make my girlfriend cry. That would trick her into thinking the book was good then she’d drag me to the movie and I’d end up crying too. I know this because I saw The Notebook.

But it does happen. And maybe letting your dog out when you know full well there are rabid wolves loose in the woods makes it a little bit your fault when you have to shoot him. So maybe letting your Russell Wilson out past the line of scrimmage when you know full well there are middle linebackers and free safeties out there makes it a little your fault if he gets hurt.

Common wisdom says it’s just a matter of time. Denver, Green Bay, and New England fans can softly laugh to themselves when reading Wilson, Robert Griffin, or Colin Kaepernick’s stat lines because it’s only a matter of time before they’re nonambulatory versions of their young selves. Forced to throw from wheelchairs like Michael Vick.

But is it true?

For my dataset I looked all 799 QB seasons with >7 runs since 1991. I used the runs cutoff because Football Outsiders made me. I used missed games as a proxy for games missed due to injuries because I don’t have access to an injury stat - obviously this will add to noise. The raw data had a correlation of .15 and suggested a QB will miss .48 games per season per rush attempt per game. The correlation is obviously low but at least the relationship is as expected. 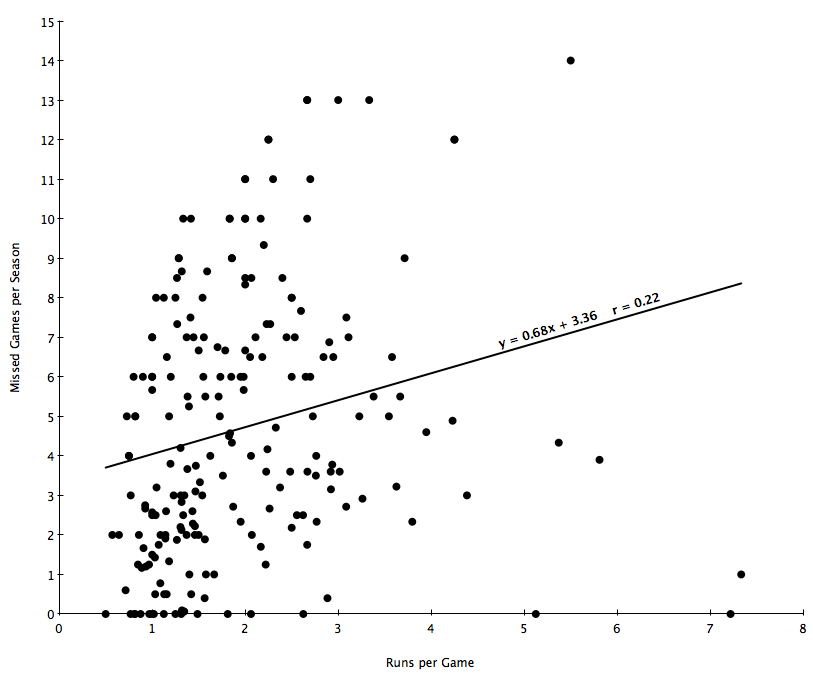 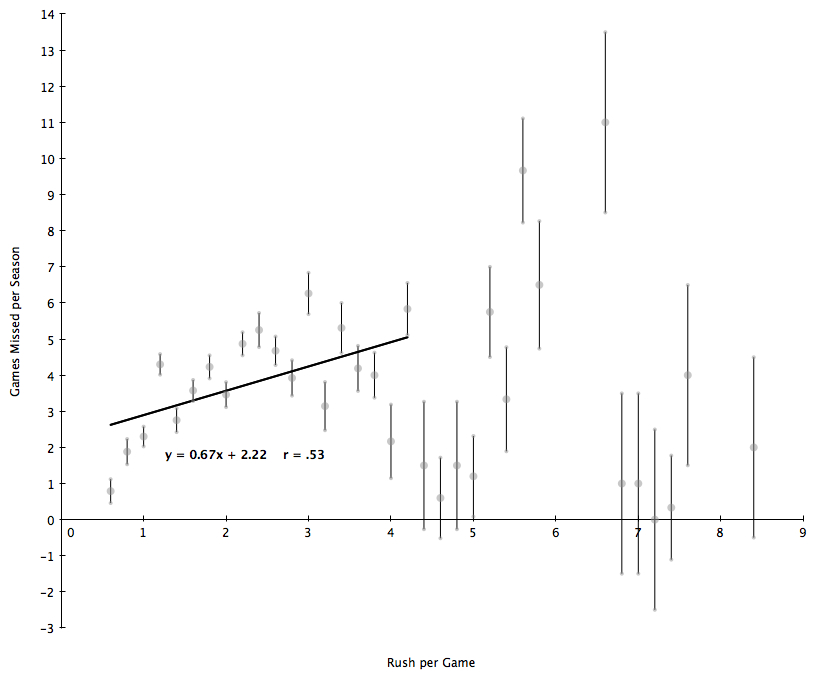 As you can see, in the binned chart I ended up with essentially no correlation. That’s because simple linear regression got killed by the low sample (and high error as shown by the bars [95% confidence intervals]) data at the high end of rushes per game. In essence, the QB data on the first graph is a weighted version of the binned seasons in the second.

Limiting a simple regression to the high sample low error data beneath 4.4 rushes per game (the first where the error includes negative games missed [playoffs!]) gives a correlation of .53 (large - but whatever, I had to eliminate data points to get it) and a slope of .67 (roughly the same as in the QB sample).

In the end I think it’s safe to conclude that there’s a (very noisy) relationship between rushes per a game and games missed for QBs and it is between .40 and .70 missed games (per season) per rush attempts (per game). Per per per per per.

So, let’s naively assume that this relationship isn’t catastrophically skewed by other considerations. Let’s also assume that all rush attempts and QBs are created equal what does the data say about Russell Wilson and rushing?
Rushing last season, Russell Wilson averaged 5.25 attempts per a game and 6.10 yards per attempt. Throwing, he averaged 6.8 NY/A. Marshawn Lynch averaged 5.0 yards per attempt rushing with 19.7 attempts per game.

Because throwing is riskier than running I expect QBs to have a higher Y/A passing than their RB has rushing. And we see that - although the differential is perhaps too great that’s another discussion. Similarly I’d expect DangerRuss to average more per rush than Lynch because it is riskier to run a QB than a RB. We see that but is that differential big enough?

At 5.3 attempts per game I expect Wilson to miss 3.5 games due to rushing attempts.

If we assume that Wilson’s backup QB plays at 2011 Tavaris Jackson levels then those 3.5 games are worth .89 expected games lost. Over that season Wilson would be expected to have 66 rushes for 408 yards. At .07 points per yard Wilson’s rushing is worth 28.5 points or .85 wins - or almost exactly the amount lost replacing him with a Jackson level backup.

Obviously the tradeoff isn't between the rush yardage and no yardage. We could give the touches Lynch or make them throws. In either case simple math would show that switching the touches is better than leaving them with Wilson. But the math isn't simple. More touches for Lynch or more throws for Wilson probably means less yardage per attempt. Also, at least some of Wilson's rushes are scrambles and they really are a choice between rush yards and no yards.

Perhaps Wilson did rush a little too much last season. If you think Brady Quinn or whoever ends up backing him up is worse than Jackson it's likely he should rush less next season. However, I think it is clear that Wilson’s rush numbers are close enough to optimal to be indistinguishable given the simplifying assumptions (didn't consider leverage of rushes or career ending/full season injuries) and noise at work in my model. So, next time a New England fan says DangerRuss is good but his running isn’t worth the injury risk you can be the one who laughs a little.

But really it doesn’t matter since Russell Wilson can’t get hurt.