Share All sharing options for: Seahawks WR Chris Harper and the SPARQ Rating

Chris Harper was the 14th wide receiver selected in the 2013 NFL Draft. The Seattle Seahawks took the big, physical senior out of Kansas State late in the 4th round, and according to our Adjusted SPARQ metrics, he was the 4th rated athlete drafted at the WR position out of the first 15 WRs selected in the 2013 Draft. 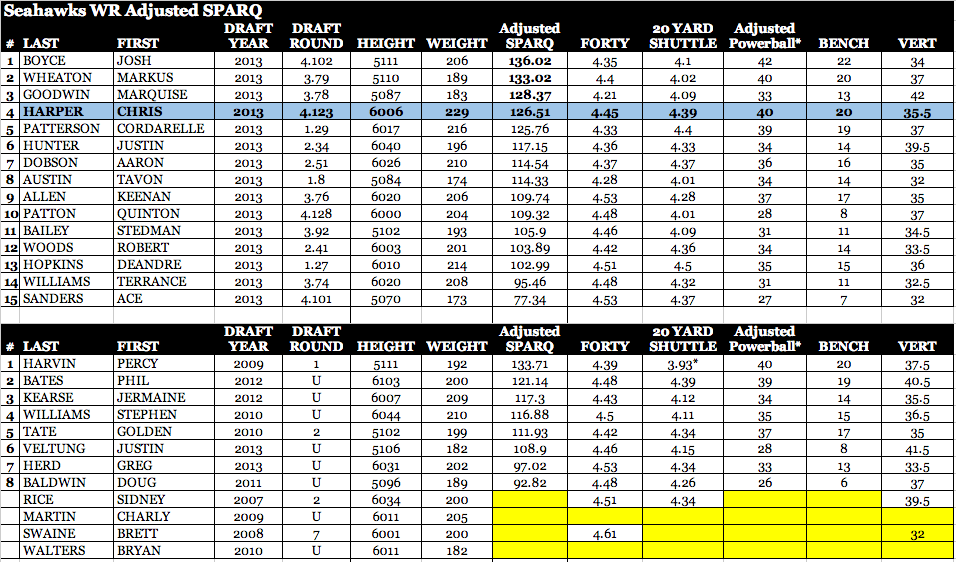 Players like Cordarelle Patterson and Justin Hunter didn't the bench at the Combine or their Pro Days (so we inserted numbers from their Junior Pro Days, via Tony Wiltshire), and would have had an Adjusted SPARQ around 125 and 117, respectively.

Interestingly, Percy Harvin did not run at his senior pro day, but had a 3.93 short shuttle at his Junior day, per Wiltshire - and his Adjusted SPARQ would be 133.71. So, during the offseason, the two receivers the Seahawks acquired likely have the two highest Adjusted SPARQ scores in the WR room.

Nothing about Harper's athletic scores are amazing in and of themselves. What is the most glaring thing about him as an athlete is that he performed those numbers at 229 pounds. Pete Carroll has gone on radio saying he could play at 234 to 238 pounds! It makes me wonder if that weight and size factored into the Seahawks bypassing Quinton Patton, who most "pundits" rated as a better overall WR. Patton is not a small WR per se, 6'0 and 204 pounds, but someone like Harper could carry 30 more pounds to the fight.

With the addition of sub-6-feet-tall Harvin, paired with sub-6-foot Tate and Baldwin, it makes me wonder if the Seahawks were going "Big WR" or bust with their selection. Were the Seahawks bent on getting a big Split End to add a different dynamic to the group? Rice is not known as a physical WR even though he is over 6 foot 3.

I also wonder what Harper will bring to the mix in terms of the run game, at 230+ pounds he has the size to go after Safeties when blocking and have a size/weight advantage (Harper could likely play at a weight 4-5 pounds heavier than Kam Chancellor). After all, Alex Gibbs, Tom Cable's mentor and the father of the zone blocking scheme, says "we block Safeties, we don't block Corners..."