Admit it…you were feeling faint at the thought of Cliff Avril and Michael Bennett joining the pass rush the moment you heard they were coming to Seattle. The Fantasy and dreamlike pass rush combinations with Chris Clemons and Bruce Irvin were overwhelming.

WAIT A MINUTE... There is just one problem; we are going to be without our starting LEO and the rookie leader in sacks to start the season. Terrific. At least we get Irvin back after we start the season 4-0 right? (I'm an optimist what can I say?) Chris Clemons is a different story though. He may fall on the PUP list and be available after 6 games. His absence will be felt.

We all know Chris Clemons’ value to the Seahawks defense. This knowledge is based on watching countless hours of our beloved Seahawks through crushing defeats and glorious highs. My point being… more often than not the defense relies on how Chris Clemons performs.

That leads me to Cliff Avril and Michael Bennett. We've heard Avril will possibly play some at Will Linebacker, but played mostly at DE for the Lions last year. Remember when Bennett played as a pass rushing DT his rookie year with us in the preseason in 2009? Well, he played primarily at 5 tech DE for Tampa Bay last year.

Confused? No problem. My brother and I have your back.

What we've done is give everyone here on Field Gulls more data to understand and know Avril and Bennett; like we know Chris Clemons. I think the timing is right considering that the draft numb is over, Scruggs is out indefinitely, and, well... Irvin’s situation. (WHY BRUCE??!?!??!?!?!?)

The analysis is based on three players that played defensive end in 2012: Cliff Avril, Michael Bennett, and Chris Clemons. It combines rough data collected by me tracking attributes of each of their plays against a common opponent in 2012, the Minnesota Vikings. I'm certainly no data analysis expert but hope you are able to enjoy the content. I offer some commentary but hope to leave most of the interpretation up to you, draw your own conclusions and let me know what you think!

Incidentally, Cliff Avril was injured in both Viking division games (undisclosed back injury week 4 and concussion week 10). For this reason I used both of his partial games in my evaluation, an important point to remember when evaluating the data.

Why the Minnesota Vikings?

It seemed to make sense at the time; that and, ever since the poison-pill episode, we seem to be cosmically tied to them. The real point was to see all three players playing in a somewhat similar environment in order to better compare and contrast their play styles, etc.

I tried to isolate the attributes for the players themselves and therefore did not spend a lot of time tracking the score and other items from each of the games.

First, the Minnesota Vikings’ 2012 Offense (I apologize in advance for subjecting you to this):

The charts below show the number of plays by type, percentage compared to 193 total plays (shaded grey), and percentage of run/pass (red):

Although Kyle Rudolph looked good, it's disappointing for former Seahawk John Carlson in 2012. For the year he caught only 8 catches for 43 yards and no TDs in 14 games with the Vikings after signing the big deal last offseason.

These are the official stat lines on NFL.COM for Avril, Bennett and Clemons vs. Minnesota in 2012 (click image to enlarge):

As usual, those stats don't tell the whole story.

Cliff Avril played the most of his snaps in the "Wide 9" alignment (Greg Cosell describes this alignment in the video link HERE). The shot below illustrates how wide the defensive ends play in this alignment:

Michael Bennett played in alternative 4-3 under and over front formations, his 4-3 alignment is illustrated below: 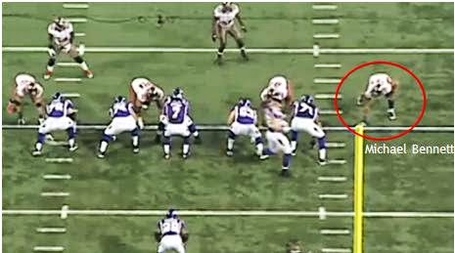 My charting shows they all played primarily outside at either 5 technique or some variation of outside pass rush technique (with limited time at 3 tech for Bennett). The table below shows the number of plays at each technique/position.

The next table to shows the percentage of time each player lined up on either the strong or weak side; although all three were heavy to the weak side, this seemed to be more an indication of how the offense lined up as Avril and Bennett primarily played left end over Loadholt and Clemons played primarily right end over Kalil. It’s also worth noting the Vikings did not seem to play a lot of sets with one or more in-line TE.

The Below pie charts depict how each player was used. Again, I kept it as simple as I could so we could see the high-level results (and to mask my deficiencies recognizing them). That’s why I don’t specify which inside gap they rushed, for example. "Outside Rush" includes any attempt they made to the OT’s outside shoulder, "Inside Rush" includes any attempt they made inside the OT’s shoulder, at the guard, etc. "Stunt" includes the redirects around and behind other defensive linemen but may not have all been actual stunts. Here are the results (click image to enlarge):

Interesting stuff. Avril rushed to the outside more than the others; Bennett rushed the interior the most of the three (although I was surprised it wasn’t more based on my experience watching him in Seattle); Clemons was clearly the most versatile, at least in how he was used.

How did the offense defend these players? Naturally, the offense opted to block these guys the most one on one with the OT. Interesting that Avril saw 3 times the amount of one on one blocking from a TE as the other two. Clemons was double-teamed the most and Avril also saw the most unblocked looks as the plays moved away from him. 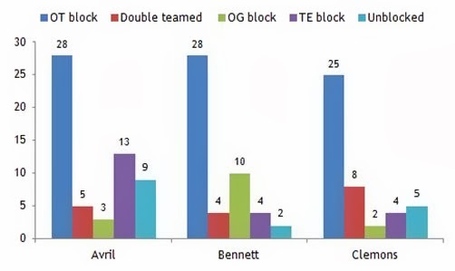 You can contrast my tracked plays below with their official stat lines shown earlier:

Let me state again, this is a totally subjective analysis as I can’t really know if they did what they were really supposed to do. For example, holding the edge on running plays to force the back inside I would still track as "Blocked" or "Non-Factor". However, I think this data can illustrate some high level indications of the player’s effectiveness. I’ll have more on the "blocked shot" later on.

Below are graphs of each player’s involvement and the result (click to enlarge).

While charting the players I noticed some things that could not be boiled down to basic metrics:

One of my favorite plays involved Avril. It's a tragedy that he will only receive credit for essentially just a tackle. In my opinion, however, he should receive credit for a: blocked shot, pass defended, QB pressure, tackle, and a sack. Quality is not great but I'm sure you can still enjoy.

After a sampling of information I am hoping you can get to know Cliff Avril and Michael Bennett in the context of how you know Chris Clemons. Although, I think we can all agree Pete Carroll and Dan Quinn have many ideas and options of how these two great players will be used before and after Chris Clemons returns.

Please consider following my brother, @hermann22, and me, @wimerek to continue the discussion on Twitter. We welcome your input and feedback, thanks for reading!!