This Week In Defense: Revisiting Seahawks at Rams, Week 4

Share All sharing options for: This Week In Defense: Revisiting Seahawks at Rams, Week 4

Narrative of the game: The view after the game consisted of rage at the coverage problems and lack of pass rush. Many fans pointing the finger at the likes of Marcus Trufant and even some at Kam chancellor.

This play is significant because it's a symptom of the Seahawks' struggles on 3rd and long, specifically this season. The view of the slot-cornerback struggles is certainly fair, but some of it had to do with just tough luck and circumstances. Sherman actually freezes for a split second here on this play allowing Gibson to run a successful tight slant. The reason for Sherman's problem isn't even intially apparent until you see the fact that the ball is tipped at the line of scrimmage by Red Bryant. The tip stops Sherman in his tracks and Gibson adjusts perfectly and Seahawks fans are left feeling frustrated.

Brian Quick makes an easy catch on a crossing route, but it winds up incomplete because he can't keep his feet in bounds. The biggest problem here is the confusion by both Bobby Wagner and K.J. Wright, who were stopped by a play fake. It's football 101. It's also a continued concern that the strong side linebackers continue to struggle in space defending the pass or communicating. 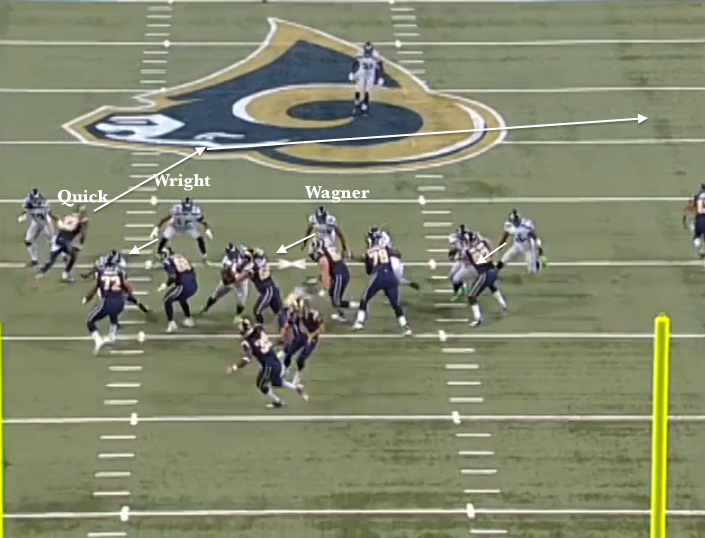 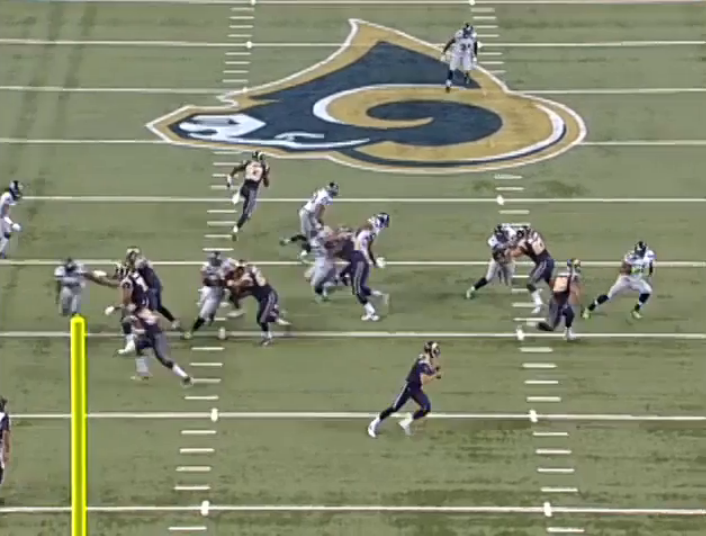 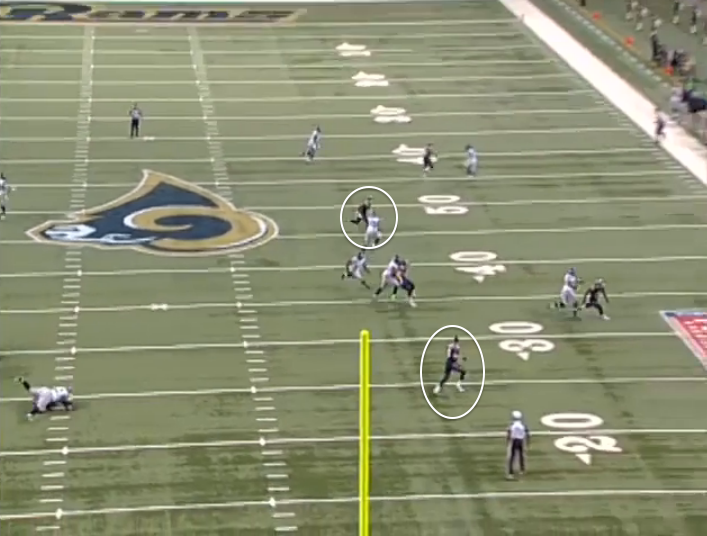 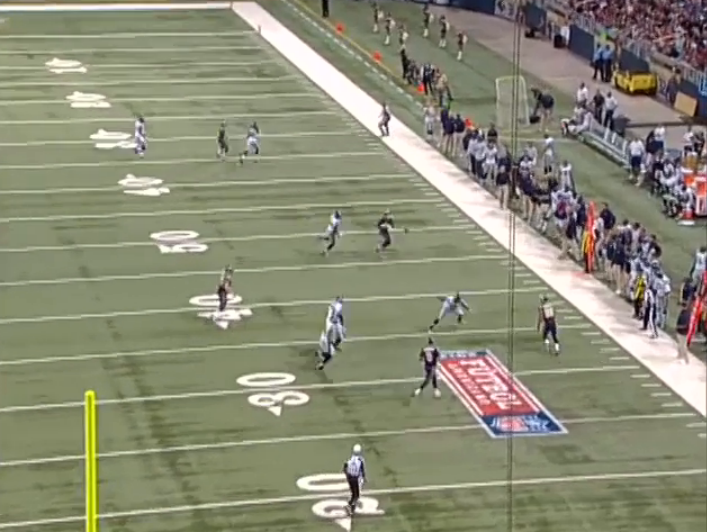 Clinton McDonald makes a play against the screen. I like McDonald but consistency is a big problem for him. This play is an example of a great play where he gets a terrific surge against the center and Red Bryant strings out the screen. This play helps slow down what had been - to that point - a pretty explosive start by the Rams offense.

Jason Jones pays a vist to Sam Bradford. He surged so quick that the Rams left guard cannot even start to move his feet to reestablish his balance until he's practically in the lap of Bradford. Jason Jones showed the 1-on-1 potential here that Pete and John hoped for here. This sack forces a 3rd and 18 draw, stopping the drive and forcing a field goal.

Sherman gets burned. If I can offer my own personal view, I think Sherman was a bit off in this game in terms of responding to off the snap quickness of the Rams recievers. He looked like he had trouble getting out of the blocks here in a simple press. It almost looks like Sherman assumed the route to be a slant of some kind and couldn't recover from that once Givens got behind him. I was a little shocked as well because Earl Thomas was late offering any kind of help. This kind of play makes me fear the Rams more than any other team in the division because that intial quickness was causing problems for the secondary all day.

Richard Sherman technically gets beat here again off the snap, but he's able to keep stride and break up the pass intended for Amendola. I like this play more than I should because of how it starts, but in most cases a corner cannot make up ground or make a play like this. 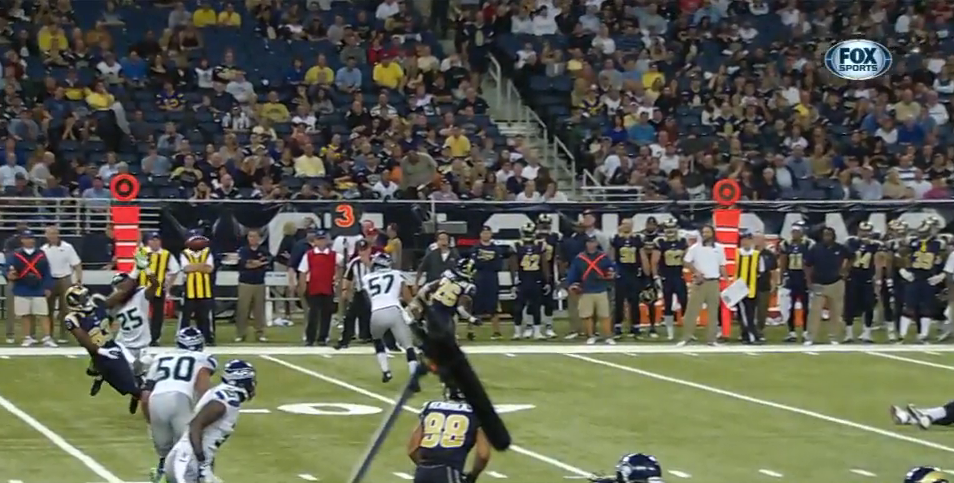 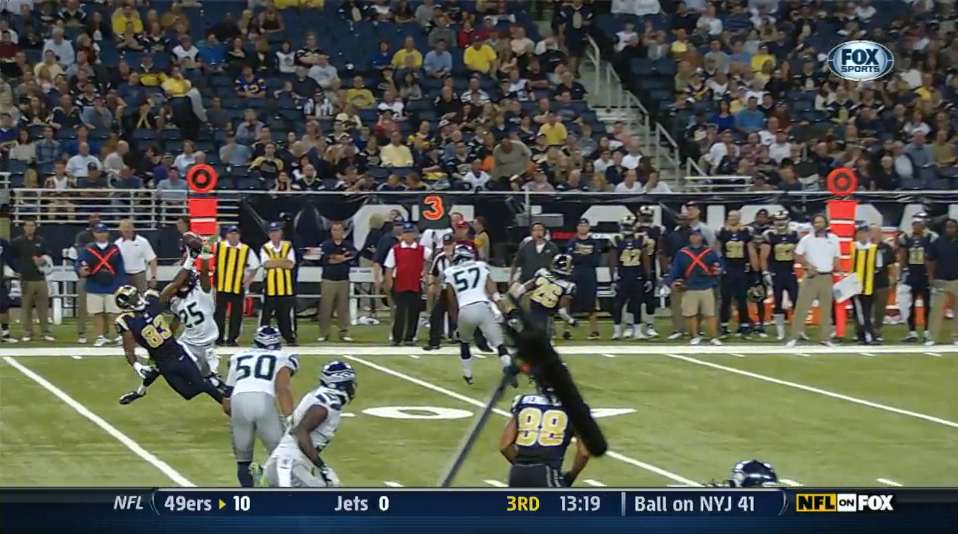 This play came during the Rams drive after Seattle's inexplicable onside kick call to start the third quarter. Another note about this game was the fact that in the Rams' spread formations in the second half, the Seahawks moved Kam Chacellor close to the line of scrimmage and Jeron Johnson played the deep safety help instead. Probably a halftime adjustment by Pete and Gus.

The front four get a great jump as the Rams pull some lineman for perhaps a strong side sweep. Mebane and Alan Branch - who's gone largely unnoticed in this game - shoot through and Bobby Wagner shows his speed, instantly shooting into cleared space and bringing down the halfback for a loss. Another drive stalls for the Rams.

This play itself didn't really impact anything overall. I just like seeing Brandon Mebane do work against the run. When I take notes to spotlight plays, I list these as (Mebane Space) meaing that as a result of his play alone a linebacker is able to make a play on the runner. This play is no different. Mebane's terrific surge turns the right guard away from center and allows a gap to form. Bobby Wagner cleans up the tackle and Mebane does what he does.

Earl Thomas gets burned. It's clear even more here that Pete and Gus were trying everything they could to disrupt the passing game. They used Earl down in the slot as a nickleback. Earl looked inexperienced as he tried to press and match quickness with Danny Amendola. I get the feeling that they were extremely frustrated with the inability to stop passing in the slot during this game because they did try at least three different types of matchups and none of them were very successful.

Some kind of miscommunication by Mike Morgan and Bobby Wagner left a huge gap in a soft zone. This is a pretty significant issue as it cropped up three or four times during the game. This play represents the struggles of Seattle's linebackers in space even more clearly than the second play I spotlighted. It's frustrating because it's almost impossible to teach this stuff. The ones that are good just seem to have that special feel in space or that ability to read a drop in the pocket and know how deep to drop.

Overall view of the game: Some good, but lots of concern coming from this game. The play calling and personnel adjustments lead me to believe even the coaches did not like what they were seeing and tried their best to fix it during the game. As much as we pointed to the slot as being a problem - and were right in doing so - I think a much much bigger concern is our linebackers against the pass. The good defenses have guys who can tackle and break up passes. This team will need some real work in that area in the coming weeks of training camp especially with so much turnover, - Mike Morgan has been taking reps at LEO and LeRoy Hill is now gone.

Game Ball: Brandon Mebane - he quietly staked himself a spot against the run and never let up. His consistency alone could earn him a spot here every week. This week however he had a pretty continuous impact on the team's successes on defense and for that I say cheers to the MeFense.

Needs Improvement: Usually in these sections I'd point to one or two guys who need to step up their game, however, in this game I can't just point to one or two guys. This defense needs improvement from both its nickel defenders and its linebackers if it's going to be truly elite. Right now, the defense is capable of dominant stretches, but even with those come big plays from consistently repeated mistakes.