There's a certain allure to to the blunt definition of man coverage: you get a guy to cover, and you stick with him until the play ends. But this scheme, like all most simple things, works on both sides of the ball.

Share All sharing options for: What Playing "Man Coverage" Means (And What Happens When You Get Beat)

K.J. Wright could only stare in frustration. In front of him stood Jermichael Finley, who's currently celebrating his first down reception with a motion eerily similar to Lindsay's chicken impression from Arrested Development, and it's not really sure which part Wright is more annoyed at.

He matched the tight end well speed-wise, only a step behind his fade up the middle of the field despite having a few seconds pause to react to the offense's first movements. On the other hand, Finley ran with his left side of the body completely open and ignored by other Seahawks near his presence, so when his quarterback zipped the ball towards his shoulder he was simultaneously catching the ball and moving forward, meaning Wright was in no real position to disrupt the catch.

It was only when he finally dragged him down - now twenty two yards past the line of scrimmage - did the other Seahawks Earl Thomas and Kam Chancellor come jogging in. And though he might have thought for a second that either of the of them could've helped prevent the big play, he will soon realize that it would've been impossible considering the cover scheme that they're playing.

Understandably, K.J. Wright is frustrated. But alas, those are some weaknesses you must cope with when you play man to man.

The NFL may be a game of schemes, but in the end, it is mismatches that win the battle. This is especially true considering that the 6'4, 246 pound Wright seems to be on equal footing with the 6'5, 247 pound Finley, with the exception that the latter is separated by a tenth of a second on the forty yard dash. And that separation, while seemingly minimal, is what makes the difference.

Man coverage is also explicitly shrewd in not allowing much leeway in mistakes, so Wright must react to a series of presumptions quickly in order to beat the play. First, he predicts the route Finley will be running. As you can see below, besides the quick gain routes (the hitch, the slant, and the flat), everything else (besides the obvious fade route) breaks or changes after 12-15 yards past the line of scrimmage. Double moves usually break before that benchmark, so if the receiver is suddenly fidgeting or changing directions, get yourself down the field cause that's where he's going. 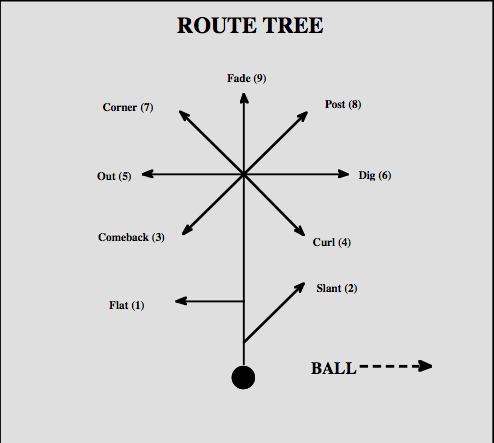 It is imperative for Wright to know every possible WR route in the book, so that when his receiver comes he knows how to beat it before he's even set on the route. Comeback or curl? Disrupt the route by latching your arms in front of the receivers' body or hitting him before he has a chance to go further. Post to the outside of the field? You better be beating the guy from behind. An dig towards the middle? Gotta be a few steps ahead of him so you can intercept the ball.

Finley runs a fade here, though it isn't obvious until about three steps in because the defensive end, O'Brien Schofield, practically attacks the tackle instead of bumping him off to Wright. From his angle, Wright is forced to hesitate to recognize which route the tight end is running, and by the time the third step is in place, he's in a bad position to catch up. It may have helped that tight end's release towards the sideline (rather than cutting inside from Schofield) showed that he wanted immediate separation from the defense and that he's planning to go deep, but without any press or blocks at the line, the Seahawks have to beat the play on athleticism alone. 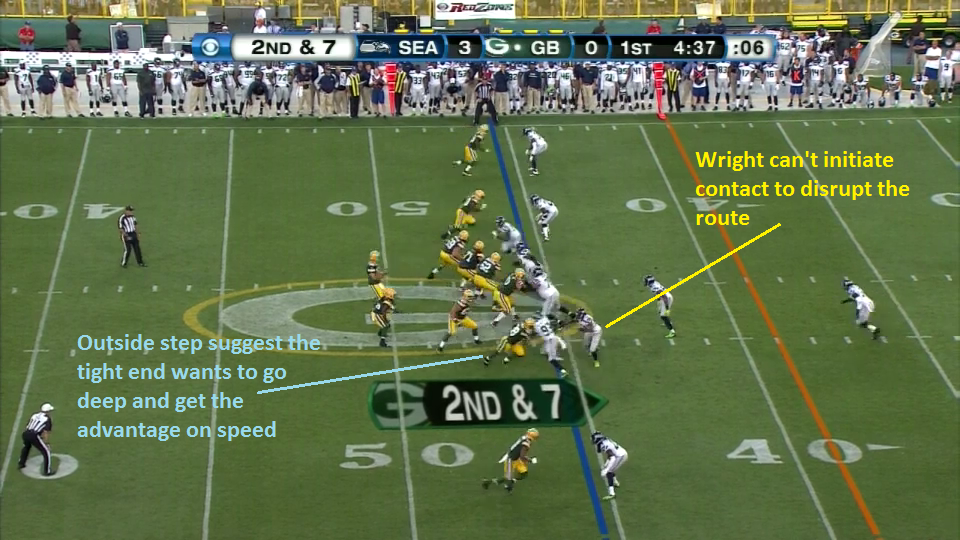 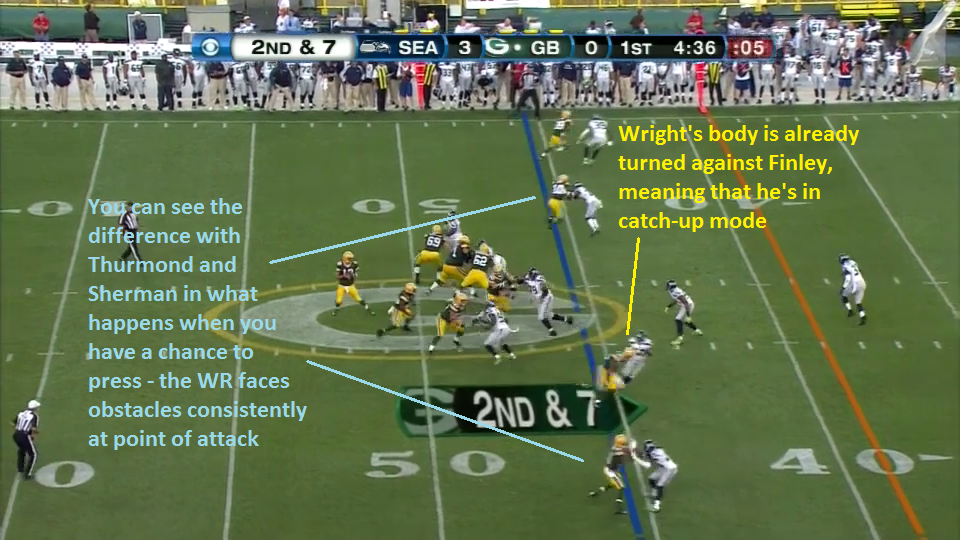 I should clarify that, technically, Wright isn't playing straight man-to-man coverage here - rather, the term would be define more as Man Free, or when the free safety Earl Thomas drops into the deep middle and prevents the touchdowns from happening. Doing so means that, if Finley does run all the way down to field and into the endzone, Thomas and Wright would've had him covered. However, Thomas can't be reckless here and go for the first thing he sees; he also has to read where the ball will be, and at the same time, which of the four receiving targets is most dangerous or needs help with. 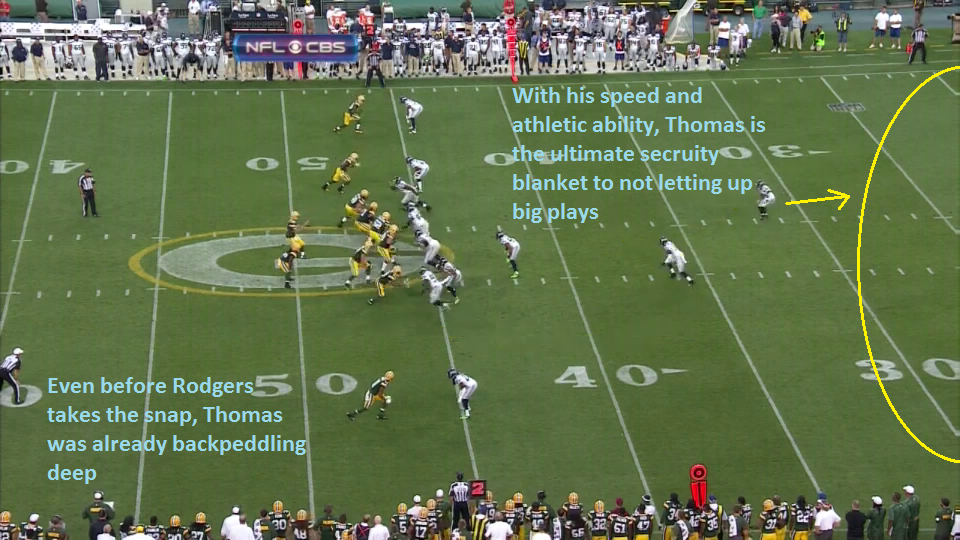 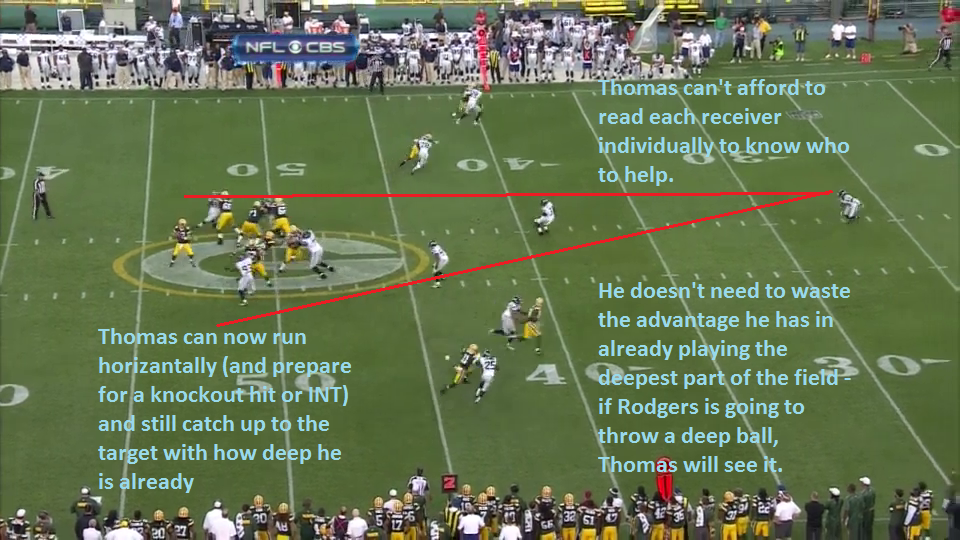 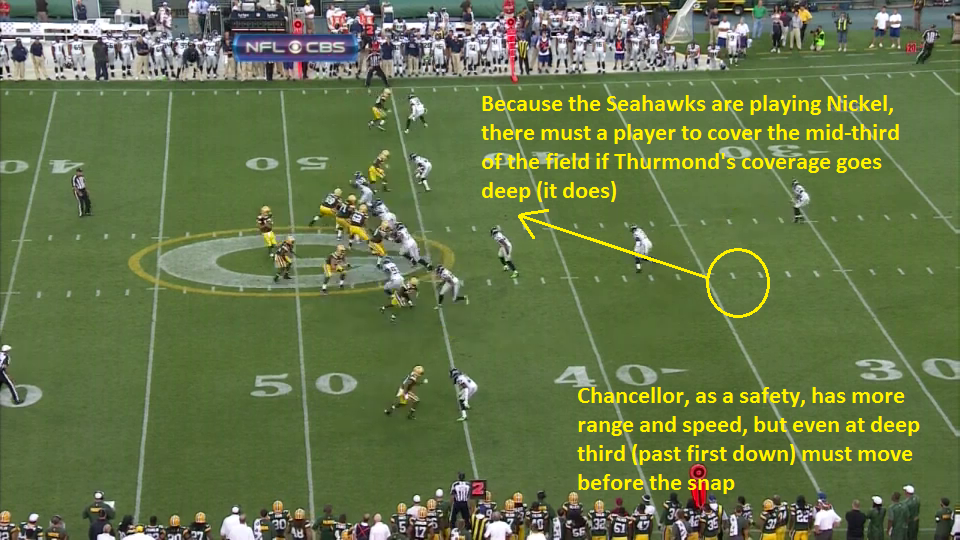 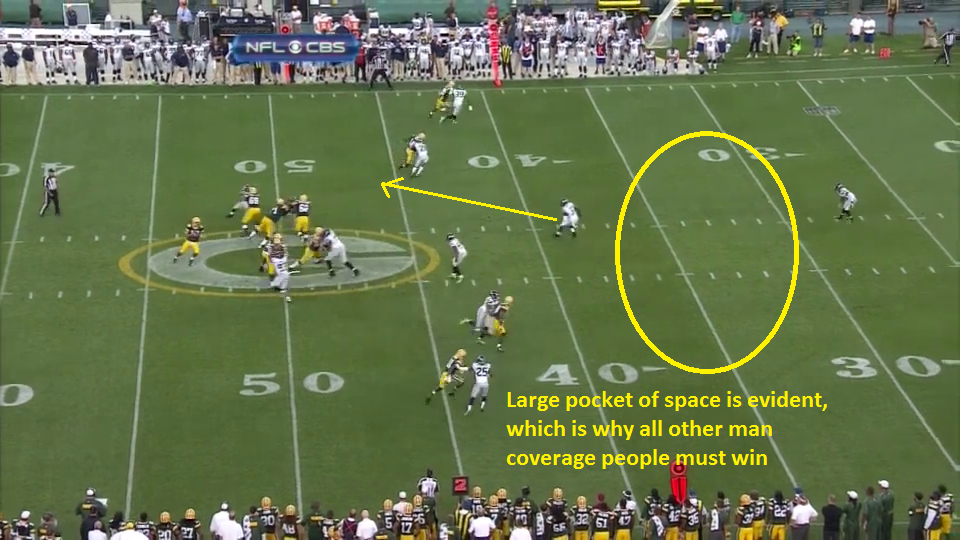 Which brings us back to Finley. With the middle of the field open, the tight end made the right move and beat Wright to his inside, forcing Wright to get help from players who are unable to do so. In the split second that Aaron Rodgers readies his arm, you see Thomas and Chancellor have their "oh crap" moment and break inside towards the duo.

When you look at that play from an overall standpoint, the defense played everything right. Practically every facet of the passing offense is covered, and every player has been tagged with another on the opposing side. Yet despite all these points, all this preparation and preemptive knowledge for one down, the fact remains that mismatches always will be the deciding factor. You can be beaten when you play man to man, and with the likes of Richard Sherman and the Legion of Boom around, it certainly doesn't happen often. But when they do, like when Wright lost out against a player a tenth of a second faster than him on the forty yard dash, all you can do is stare in frustration.