Reloaded: Fighting your way out of the corner

Share All sharing options for: Reloaded: Fighting your way out of the corner

I'll be out of town for a few days for Labor Day, so I thought I'd reload some old work to give you guys something to read if you're not out enjoying one of the last nice-weather long weekends in a while. I'll be back on Wednesday. Toodaloo.

This article was originally published on June 27th.

I've written about the constraint theory of football before a couple of times and the idea behind it is really pretty simple. When opposing players start cheating with their assignments, creeping up into the box, jumping routes prematurely, or just in general, playing with the anticipation to destroy your bread and butter, you hit them with a curve ball to keep them honest. As Smart Football's Chris Brown framed it, "Constraint plays make [opposing defenses] get back to basics. Once they get back to playing honest football, you go back to the whiteboard and beat them with your bread and butter."

I was watching the Seahawks-Dolphins game recently, and a few things stood out to me. First of all, Seattle's 'bread and butter', the wide-zone rushing attack, was severely stifled. In fact, this was probably one of Seattle's worst rushing games on the year - they failed to eclipse the 100-yard mark, even with a Russell Wilson 20-yard scramble thrown in for good measure, and just anecdotally, most of their significant rushing yardage came on zone-read stuff and not wide-zone rushes.

The Dolphins had been determined to disrupt Seattle's bread and butter and used aggressive, attacking schemes up front to penetrate, force Seattle blockers back into running lanes, and generally throw off the whole program. To stifle Seattle's passing offense, the Dolphins used a variety of exotic blitzes, which hurt Seattle's ability to run play action (Wilson had very little time or space) or any of their base passing schemes. All this worked, particularly early on. 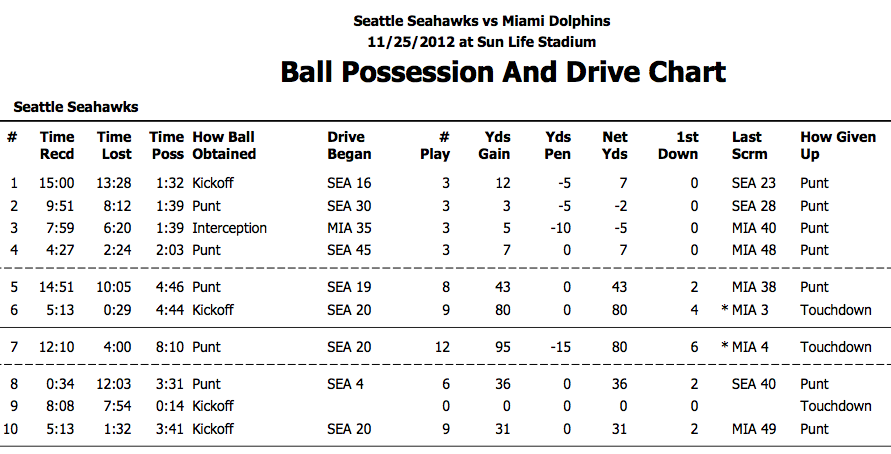 Gross. Just look at the Seahawks first five drives. Four 3-and-outs in the first quarter, followed by a short-lived but incrementally more successful first drive of the second quarter. With 5:13 remaining in the first half, Seattle had a cumulative total of 50 yards on 20 plays. Nothing really seemed to be working and the Miami defense grew in confidence and aggressiveness. Seattle now trailed 7-0 and took over on their own 19 with 5:13 left.

First play, wide zone. Randy Starks breaks through the line at the snap, forces Lynch to adjust his angle of attack, and the play goes toward the sideline, where it's stuffed for no gain. Second play - Wilson drops back to pass, hesitates, and scurries upfield on a scramble for 7 yards. A nice gain, but certainly not within the construct of their offense.

On third down, Darrell Bevell dials up a brilliant play-call, using Miami's aggressiveness against them.

At the snap, Doug Baldwin and Zach Miller run a combo stack-route - with Miller up the seam and Doug slanting across on a drag. The idea here was to draw much of the attention to Doug and Zach and that worked - Wilson looked off the middle linebacker and that left Robert Turbin with tons of room on a little leak-route toward the sideline.

Turbin fakes pass protection, which draws Karlos Dansby up to the line (he thinks he doesn't need to mark Turbin in pass coverage), but then Turbo leaks across the formation, now with two or three good steps on the defender.

Wilson's footwork in the pocket is excellent - he drops back, looks to Baldwin, the middle linebacker bites hard down on Baldwin's quick slant (probably thinking the Hawks were looking for a short gain for the first down). Wilson then climbs the pocket with two quick steps and goes to Turbin. I have no way of knowing whether Baldwin or Turbin was the 'primary' receiver on this, but regardless, the Turbin option has been set up perfectly. Baldwin sets up a nice block after his slant route gets picked up, and Turbin picks up 20.

Watch how Seattle uses pre-snap motion and then a tightly-spaced combo route to create more room for Turbin on the leak route.

Maaaaaaaan. That feels good. Some breathing room. Seattle had landed a nice, strong right cross to Miami's jaw, making them reel a bit, re-gain their balance, re-set their feet, and takes them off the offensive. Best of all, Seattle gets out of their corner and can move around to go back onto the offensive.

The Hawks go back to the ground, running it up the middle twice in a row to set up a 3rd and 1.

At this point, again, Bevell goes to a trusty constraint play - one that's usually seen thrown to Mike Robinson on play action, but this time the play is executed out of a one-back, three tight end set.

Seattle runs play-action, which sucks the safety up toward the box, which allows Lynch to run outside and get a step toward the sideline. Wilson bootlegs out, Evan Moore seals the defensive end nicely, WIlson dumps it off, and Lynch picks up the first down. Again, using Miami's aggressiveness against them to create a positive gain. Seattle stretches the field horizontally in order to stress the attacking, forceful defensive line.

After landing a second strong jab to the Dolphins' chin to get out of the corner once again, Seattle throws a haymaker on first down. Golden Tate dives through/over a defender to catch the fade at the 5 yard-line. Two plays later, Seattle scores.

The key to this drive, though, was strategically hitting Miami at spots where they were cheating. In this case, Miami was aggressive and extremely physical up front, which meant Seattle's normal run game wasn't going to work. To go back to the boxing metaphor - Miami was dropping their left glove when throwing with their right, and that's what Seattle targeted with their counter punches. They wouldn't land a knockout blow with quick jabs, but it allowed them to go back on the offensive and forced Miami to re-set and stop dropping that glove in favor of landing their right haymaker.