And we're back: One more look at the Seahawks 12-7 win over the Panthers

After a week away in one of the most amazing and surreal places I've ever been to, I return to get another look at Seattle's mostly-impressive win over Carolina.

Share All sharing options for: And we're back: One more look at the Seahawks 12-7 win over the Panthers

I'm sitting in the restaurant-slash-lobby of my hotel on Khaosan Road in Bangkok, Thailand, drinking a large Chang beer, trying to rest my foot, and watching a choppy streaming of the Seahawks at Panthers. The time is 12 am and the humidity is only bearable because I had then been in Thailand for a week. The hotel is located in the middle of an alley and it is open air, the only relief from the heat being a few fans strewn across the floor, but indeed the breeze they provide is wonderful.

Seattle's inability to put away Carolina during the game and the sloppy play on offense that quickly made us forget for awhile just how good Russell Wilson and company looked during the second half of last season was less comforting.

My memories of the game quickly faded, not only because it started at midnight local time and I had began drinking in the humid weather about four hours prior, but because of the possible viruses I may have encountered on my adventure. While spending the weekend on the island of Ko Samet I had developed a bond that I didn't ask for: Over 75 mosquito bites closely concentrated on my left foot and ankle. When I returned to my hotel in Bangkok I removed my shoe to see that my ankle was twice it's normal size and perhaps out of sickness, perhaps out of panic, I started to develop a fever.

When the Seahawks finally took a 12-7 lead early in the fourth quarter, I had seen all I could handle. I went back up to my room, where the WiFi connection could not reach, and hoped maybe I had a feint enough signal to follow on my phone. Not that it would have mattered, I quickly passed out.

i had several fever dreams over my last couple of nights in Thailand. On the Saturday before the game, I dreamt that my apartment had been ransacked while I was away and also that my plane had crashed into a 7-11 -- fitting only because one of the most home-away-from-home things about Thailand is that the American convenience store is located on every corner (or back alley) of the country. Or at least the parts I saw.

But the most concerning dream I had was that I had woken up from my fever and seen that Seattle had relinquished their lead and lost the game to Carolina. It's not that I think that my life, or the lives of hundreds of passengers on a plane that crashed into 7-11, is less important than a Week 1 win. It's only that this dream seemed a lot more realistic.

These were the exact kind of games that the Seahawks won and lost for most of last season. Quite literally in the case of Carolina. In re-watching the game (I have thus far survived and maybe even lucky enough to escape a malaria scare, but it's early yet) this was another case of the Panthers keeping it close and then having the opportunity to win in the end but coming up short. Wilson and the rest of the offense clicked when it mattered, though its not like the first half of games don't matter.

But in this case Seattle held onto the ball until the game was over and they start a season 1-0 for the first time since 2010. Most people will probably be even more concerned that they beat the 49ers on American Footnight (or whatever NBC is calling it these days) and go 2-0 but I'm quite grateful that 1-1 is the worst case scenario. It didn't have to go that way, but getting a win on the other side of the country isn't easy for anyone.

Even a team that I had placed perfect expectations upon.

I don't know how a person writes something different about a game two days after it's over or if anyone cares anymore, but I'll do it anyway. I'm back home again, this is just what we do.

- Clicking "when it matters" came up early in this game. The Panthers had a 1st-and-10 on their first drive after a defensive pass interference against Seattle but Greg Olsen, one of the most valuable players to Carolina, dropped a sure "first-down-and-more" that could have put the Panthers possibly into the red zone. Instead they punted three plays later. If not for that, the game could have been much different and it shows that the first drive is just as important as the last.

- In Thailand you can get better phad thai from a street vendor than from anywhere you'll find in America and it costs roughly two US dollars.

- A rough offensive performance shouldn't be blamed solely on the offense; what if the Panthers just have a really good defense? Carolina went from 32nd in defensive DVOA in 2011 to 11th in 2012. With the addition of Star Lotulelei, why can't they be top ten this year?

We don't know yet how good the Panthers are, but it seemed like they consistently had three or four guys in the right place (around the ball) on defense.

- I fell in love with the women of Thailand while still on U.S. soil. Her name was Kylie and she was our flight attendant on EVA Air flight 61. If only my friend and I hadn't gotten so drunk on the plane ride over, who knows. She would be the love of my life until seeing the next group of flight attendants on the connecting flight from Taiwan to Bangkok.

I don't want that to come off as misogynistic, they were all just really beautiful. (Pro tip: It's not sexist if you use words like "beautiful" and "gorgeous.")

- It may be a really simplistic way of viewing football games, but it often just comes down to "how many drives did you win versus the other guys?" Seattle scored on 3 of 8 drives, not including running out the clock on their ninth. Carolina scored on 1 of 7, not including their final drive of the first half.

Speaking of which, Carolina had :35 on the clock at the end of the first and three timeouts but opted to run the clock out rather than try for a field goal. It might have seemed greedy to want more than what they had just accomplished -- a sack-fumble on Wilson from Charles Johnson -- but maybe fate was saying "this is your chance." I don't know if playing it safe was the right or wrong thing to do, but it seemed like the Panthers had a ton of opportunities to make this their statement win to start the year and let it slip away.

Or in this case, gently placed it on the ground and hoped it would Seattle would not pick it up.

- I also had hopes in Thailand. While the women are extremely beautiful, so too are many of the boys. I don't know how often I looked at a Thai girl and thought "wow" and didn't realize it was a ladyboy (in the sense that I'll never know because I wasn't trying to find out) but I can definitively say that I looked at over 100 ladyboys and knew what I was seeing. At one point on the beach a group of five of them in matching purple bikinis came and sat next to us and started taking some photos together. Despite perfect figures, it was not hard to know what you were looking at.

- If this is an impressive play by Russell Wilson to keep a drive alive in the third quarter: 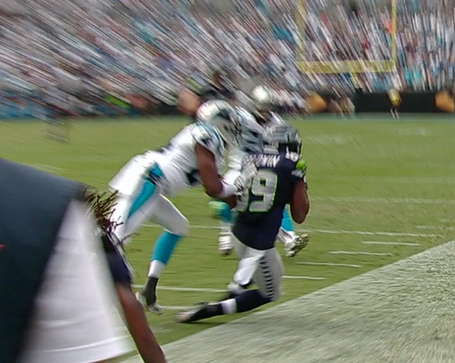 Then his intentional grounding on a very similar play shortly afterwards shows that at least a part of him is still human.

- Doug Baldwin and Golden Tate came into the season with many questions to answer and they scored well in Week 1. Baldwin had bigger numbers but Tate almost seemed like the focal point of the offense once it became apparent that the Panthers were doing a good job of keying in on Marshawn Lynch. I would also say that the playcalling, like Ray-Bans on Will Smith, made them look good too.

- I negotiated with a vendor in Thailand to buy a pair of Oakleys at $20 instead of his original asking price of $60 (I don't care if they are fake, it was $20 for a good pair of glasses.) The conversion rate from dollars to baht is basically 30 to 1 and so you sort of get caught up in the fact that the numbers themselves are so much bigger. Even if it seemed silly, I would negotiate the price of a hotel room from $23 (or 700 baht) to $20.

A hotel room on the beach of the island of Ko Samet was $23 a night and that was too rich for my blood?

- There is a correction on the previous penalty enforcement: 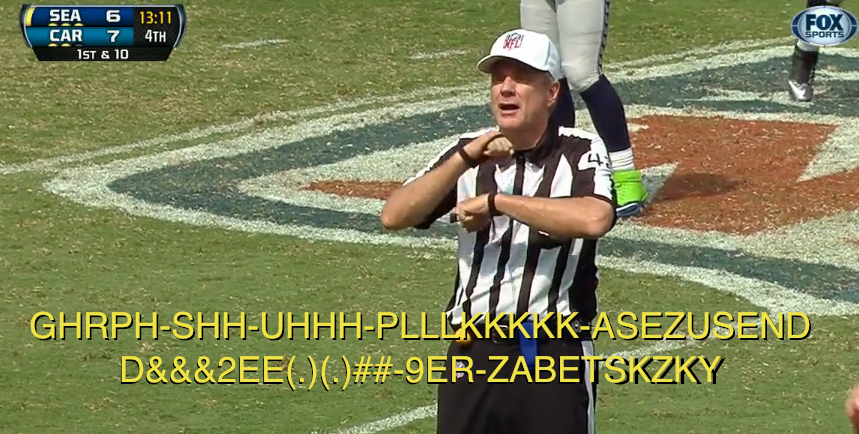 - There was enough time for the Panthers to kick two field goals, which seemed more likely than one touchdown due to how the defense was playing. So I disagree with the decision to go for two when up 12-7 with over ten minutes left.

- A good decision in Thailand is to beware of locals trying to get one over on newcomers. Immediately we were told to get a "Public Taxi" at the airport but what they didn't tell us was to insist they turn on the meter. He charged us a flat fee of 450 baht, which seems like a great deal considering that the ride itself was a terrifying 30 minutes at 100 miles per hour but in reality it's only about a 100 baht ride.

In Thailand, a 30 minute taxi ride costs roughly the equivilant of a starting meter in the U.S.

I'll be going over much more of my trip, with tips and tricks that I picked up along the way along with bug bites, romance, and a trip down the most terrifying sex alley I've ever been down (Okay, that was my first trip down a sex alley) in my next NSFW podcast. A good tip if you want me to only cover sports in my podcasts is to A) not listen and B) make your own!

- Tate was great on Sunday and I could see him earning upwards of $40 million on a new deal if he keeps it up. Two years ago people were saying he should be cut in training camp.

EDIT: Imitation is the sincerest form of flattery? Maybe. Pretending to be somebody else and then putting your own work out there under their name is probably some sort of fraud though.

This "Tis the night before football" fanpost is 100-percent not me. I have not been on Field Gulls since last Monday. That's why the person says "Thought I'd sneak this in on the fanposts" because he doesn't have the authorization to write articles. You'll notice that when you click on the name 'Kenneth Arthur' that there are only 16 comments. (No you won't actually, user has been banned and article hidden. If you want, you can transfer those nine recs over to this article!) Frankly I don't know what's going on or how I feel about it.

Oh yeah, I don't feel good about it. Please take careful note that if you read that fanpost that it wasn't done by me, and I don't care if you liked it or not, I'm not taking credit for it and I don't want credit for it. Why would a person even want to give me credit for it? Am I still hallucinating?