Goodbye Jordan Matthews. Not only is the Vanderbilt stud WR playing his way into mid-1st round draft consideration (and out of the Hawks’ likely reach), after the game in Carolina I really can’t, in good conscience, recommend drafting a WR in the first with such underwhelming performances from both offensive and defensive lines. In fact, our WR’s might have been our best performing position group (all due respect to LOB) on Sunday.

So in this week’s gems I’m looking at all things hand in the ground: guards, tackles, ends, gardeners, those weird guys at the beach with the metal detectors…maybe this week’s gems will be mounted in a nice metallic ring of some kind?!

Let’s start on…defense. It feels like there are more holes and/or expiring contracts on defense. Tony McDaniel was probably the D-line’s best performer this week, coming away with 5 tackles and decent pressure. The 28 year old, 6’7"/305lb’er from Tennessee is on a one-year, prove-it deal and could walk at the end of the season, but it doesn’t seem (even at an increase of his current $890K deal) it’d be tough to get him back. 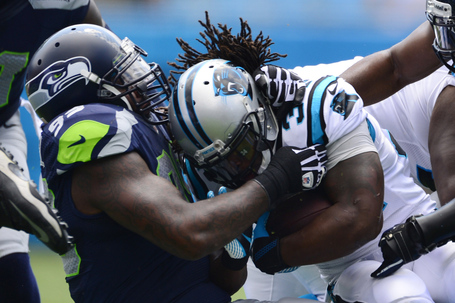 The 6’4"/323lb human DE experiment, Red Bryant, is on year two of a 5-year deal ($6.6mill in 2013). I forget the exact breakdown of his contract, but I do remember that his dead money hit is much less after this year. Palatably so. I’ve never really liked Red at that position, and even less so at his current price. Bryant may become a future cap casualty going into his age-30 season. Red tallied one tackle and one humorous attempt at chasing Cam Newton out of the pocket. Not sure it qualified as "hurrying the QB".

As much as I liked 6’4"/274 Michael Bennett in the preseason; is as much as I didn’t notice him at all on Sunday. And the stat sheet confirms his lack of production. I think he has more in front of him, but (like McDaniel) Bennett is on a one-year deal ($4.8mill).

It was just discovered that D’anthony Smith (6’2"/300) has actually been signed to an extension for 2014 at close to league-minimum. I still need to see him play more before forming an opinion. Regardless, the price is great.

Brandon Mebane (6’1"/311) is on a similar 5-year deal to Bryant’s, but Bane’s started a year earlier and is now in year 3. He is currently signed through 2015 at roughly $5mill per. Mebane contributed a couple of assisted tackles this week, but does nothing in the way of pressuring the QB, and Carolina’s success running the ball suggests he’s not doing enough versus the run. I legitimately wonder if the rookie, Jordan Hill, doesn’t have a real shot at displacing Mebane this year (when Hill gets healthy).

Speaking of Hill, he is on the first year of a standard, 4-year rookie contract. He’ll be here for a while on the cheap. Thank goodness. But we need 1-2 more just like this, and I don’t think Jesse Williams is one of them. At this point I’m really missing Greg Scruggs and Jaye Howard. I’m excluding LEOs from this piece as I’m pretty happy with the group of Clem, Avril, Irvin, OBie, and May-owww-a...all with multiple years remaining (except for Schofield).

Notice that I’ve included the measurements on each player. This is because I notice how each position (DT/NT/DE/5-tech/3-tech/1-tech) seems to have twins/triplets. Red=Jesse, Bane=Hill=D’anthony, Bennett=Brooks (if he comes back…this was also the attempted trade target Brian Sanford, and possibly Scruggs depending on where his weight is currently). The similarities of our LEO’s is even crazier: Clem 6’3"/254, Avril 6’3"/260, Mayowa 6’3"/252, Irvin 6’3"/248, Schofield 6’3"/242. This could be a really interesting way to shade our scouting of the 2014 college class.

At this point, I wouldn’t doubt that the Hawks give McDaniel another 1-year deal next offseason, but as a hedge for the draft, and then draft a long DT as well. The absolute biggest/longest/tallest DT in this year’s draft comes from the same school as McDaniel: Tennessee’s Daniel McCullers (actually the biggest SOB out there is Baylor’s Shawn Oakman at 6’9"/275, having an incredible start, but he’s an underclassmen), but we’ve talked about him before. Next on that list is Virginia’s 6’7"/295 psuedo-JJ Watt; Brett Urban. No tape on Urban yet, but it is worth noting that he does have some "SWatt" to him; having already batted 4 passes and blocked one kick in his first two games this year (JJ blocked 7 passes total his last year at Wisconsin…Urban on pace for 24+).

Next down the list is Minnesota’s Ra’shede Hageman. Listed at 6’6"/312, Hageman is a pretty highly rated prospected (seen as high as 1st, but primarily in the 2nd), and he’s been living up to those expectations so far this year:  8 tackles, 2.5 TFL, 1 PBU, 1 blocked kick. These are very nice 2-game stats. Unfortunately, Hageman reportedly has some character issues. Here is his 2013 debut versus UNLV:

Cal’s Deandre Coleman is next down the list in size, but further down the list in 2013 production. The Seattle native hasn’t done much as of yet for the Bears, but has a roughly 4th round grade.

Higher up the list of 2013 performers, but lower down the length list, is Penn State’s DaQuan Jones. This former teammate of Jordan Hill has had a really impressive first two weeks. Listed at 6’3"/318, Jones has put up a crazy 18 tackles so far, and augmented that with 5 TFL and a pair of sacks. When I finally got tape of Jones, I was a little surprised at the stats, as he doesn’t seem to have any one overwhelmingly "plus" skill. His get-off, speed, power, and pass-rush repertoire are all good, but not great. His best attribute might be his ability to shed blockers. Here is his tape:

If I have a favorite DT "type" in next year’s draft, it might be the Michael Bennett. In addition to USC’s George Uko (6’3"/280), who I featured in my preseason watch-list and who is off to a nice start (5 tackles, 3 sacks, 1 FF), I like Florida’s Dominique Easley. Listed at 6’2"/285, Easley has the upside to be a monster. Both Uko and Easley share one important trait: electric get-off. Easley’s might be the best I’ve seen. Watch him time up Stephen Morris and Miami’s snapcount all day long:

Easley had a field-day when lined up over Miami’s center. For one of the so-called smaller DT, Easley has a pretty incredible power bullrush. I would, however, like to see him improve and incorporate more rip and swim. He really underutilizes his hands overall. I do like the fact that Florida moves him EVERYWHERE; outside the tackle, over the center, shooting the guard. Great versatility, which is again similar to Bennett.

Easley currently shows only 4 tackles, 2 TFL and 3 QB hurries this year, but his game impact seems greater. Draftscout currently lists Easley at 35th overall, but this would be a guy I would need to see fall into the 50-60 range to consider for the Hawks. Could be a really nice marriage of need/value/talent then.

Lastly, on DL, let’s take a look at the 4-3 defense 1-techs. I do have my theory that the Hawks may be transitioning to a more traditional 3-4 defense in the near future (where a guy like Sealver Siliga will be more useful), but  in the meantime we’re looking at guys 6’1"-6’2" and 300-320lbs.

I don’t have any 2013 tape on him yet, but one that has piqued my interest is the guy playing in place of Star Lotulelei in Utah: Tenny Palepoi. Listed at 6’2"/300lbs, Palepoi has already amassed 11 tackles, 3.5 TFL, and 2.5 sacks in his first two games for the Utes. To me, any DT putting up more than 4 tackles a game is in rare air. Last year, for reference, Star Lotulelei, Sly Williams, Sharrif Floyd all averaged 3.5 tackles/gm.  I also REALLY like a DT that can average 1.0 TFL/gm. Palepoi is hitting both of those standards so far. Oh, and did I mention that Draftscout has him as their 686th overall player? Yep. 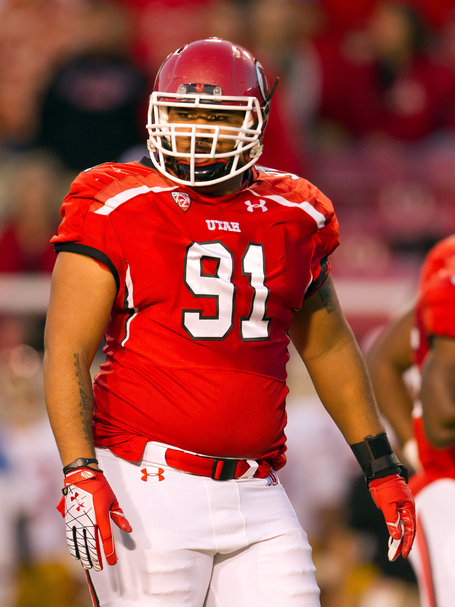 I know I said I wasn’t going to talk about DE/LEO’s, but let me just leave this here (Juco transfer to Kentucky who has almost identical build to Jadeveon Clowney -6’6"/260, a really advanced repertoire of pass-rush moves, excellent closing speed,  and already 4 sacks on the year to lead the country. Currently a junior, but if he keeps up this pace against SEC opponents he might declare):

On the opposite side of the ball, who here is completely confident in any of Breno, Sweezy, Carp, McQuistan? Admittedly, Carolina may be the toughest front 4 the Hawks will face this year, but it was still very hard to love what our O-line did against them; in run blocking, in pass-pro…it was all underwhelming.

When looking for a RT, I find an interesting scouting technique is to list the stud LT in the country, and then look at their counterpart from the same line on the right side. This can mean looking at A&M’s Cedric Ogbuehi, Alabama’s Austin Shepherd, or Tennessee’s JaWuan James. I already have talked about James and the value he could present in the late 3rd round, Ogbuehi has 2nd round buzz, but today let’s note Taylor Lewan’s linemate at Michigan: Michael Schofield. Here is his recent performance against ND and their talented D-Line including Stephon Tuitt and Prince Shembo:

Schofield currently sits with a 7th round projection. A guy that I like even better than Schofield, and currently registers a 536th overall grade from Draftscout, is this kid Billy Turner from North Dakota State. NDS is the team led by unheralded QB Brock Jensen that recently upset Kansas State. Turner is by no means a finished product, but I see enough athleticism at his size, that he could easily be the next great Tom Cable special; 7th round raw carbon that he can press into a diamond.

At the guard spot(s), there is probably no better talent in this upcoming year’s draft than Baylor’s Cyril Richardson. He’s currently what we wish James Carpenter would be, and will likely be the first guard off the board in April. At the other end of the spectrum, in the 7th round, I really like Florida’s Jon Halapio. Total dirtbag. Unfortunately, offensive guard would appear to NOT be high on draftbreakdown’s priorities for fresh cut videos. They have no 2013 games for any of my favored guards ready.

I’ll leave you with a couple rapid-fire scouting reports.

Don’t have a solo cutup of him yet, but Fresno State TE Marcel Jensen has opened with 5 catches over the first two games for 91 yards (a handsome 18.2 YPC). Could really fill the Anthony McCoy role nicely in 2014, standing 6’6"/270 with good athleticism and a late 4th round projection. You have to parse through some of the Derek Carr videos to catch Jensen’s play.

Another TE I’m more likely to have mentioned: Texas Tech TE (wonderful alliteration) Jace Amaro. He is currently what many thought/hoped Colt Lyerla might be. Or what we still hope Luke Willson will be. Big, and crazy fast. Only Amaro is having a FAR more productive year than Willson ever did. Week 2 versus SFAU, Amaro posted a ridiculous 8/142/1TD line (17.75YPC):

Speaking of Willson, I really enjoyed watching Rice play A&M opening week, and this 6’5"/210lb WR of their's really caught my eye. I tweeted the day of that he was reminding me a bit of Jordy Nelson, and on repeated viewing I think Nelson has more speed, but Taylor has better hands. This is Jordan Taylor, a junior:

Here’s a new tape on previously highlighted CB Dontae Johnson; a player that continues to grow on me. He misses on a tackle early, but then proceeds to tally 7 tackles the rest of the game. In the 10 times Johnson’s mark was targeted, LaTech completed 5 passes for 8.8ypc (note that he’s never beat over the top, it’s always the short passes with RAC), fell incomplete 4 times, and had one ticky PI call. And, of course, he’s got that great size: