It's 1:15 PM in the morning. I'm watching the overnight bouts of Million Second Quiz online. And the Seattle Seahawks are 2-0.

Formerly known as DraftWatch, this column will be keeping track of more than just draft rankings this year. Because hey, we're not playing this year for draft position. I personally won't be satisfied without at least an NFC Championship Game berth. (I'm a pessimist like that.) Draft rankings will still be part of the column, but we'll be taking more of a long view in this weekly column for what could be a championship season - notably, every week will feature the NFC standings, as well as the upcoming games of all of our rivals, so you'll know who to root for week to week.

So let's start things off with those NFC Standings, shall we? 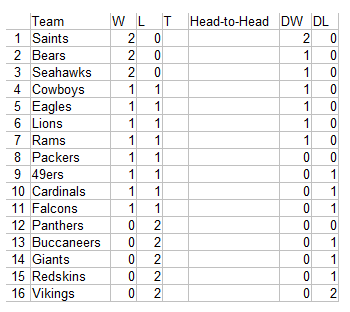 (Conference standings are determined in the following order: W-L record, Head-to-Head record, Divisional record, Record among common games, Conference record, Strength of victory, Strength of schedule, and then a whole bunch of gobbledygook about scoring rankings, net points, spelling bees, and thumb wrestling. We'll hold off on the deeper tiebreaks until they're absolutely necessary.)

With the number of major matchups that we've already seen in the first two weeks of the season (Both of San Francisco's games, for example, and the Week 1 tilt between the Saints and Falcons), only three NFC teams have managed to get out of the first 1/8th of the season unscathed. And lookit that, the Seahawks are one of those three teams, with their first 2-0 start since 2006. Seven years... damn.

The only reason Seattle isn't in the top spot is because the Saints have already played - and won - two division games. The Hawks won't have a chance to match that total until Week 7, when they travel to Arizona for their first game against the Cardinals. (And the Saints won't have another divisional game until Week 12, so no use hoping they trip up first.)

Meanwhile, there's a lot of teams out there who are already digging themselves a hole in the standings - paging the Vikings, please pick up the white courtesy phone - and it's only fair that we also check on the nascent draft order. Minnesota is currently in the #1 position, with Pittsburgh and the Giants close behind. And Washington - who are still committed to sending a first-rounder to the Rams for the trade that got them RGIII - would have the fifth pick in the draft if it were held tomorrow. C'mon, Team That We're Not Allowed To Refer By Name Anymore, win a few games for us.

Here are the full draft standings as of Week 2:

(Draft standings are found by ranking all 32 teams in reverse order of W-L record. Strength of schedule is the first tiebreaker, followed by divisional record, and a coin toss after that. SOS takes into account the W-L records of all 13 opponents on a team's schedule, with divisional opponents getting double weight.)

And now for what will likely be the most important part of the column, the preview of games that our potential rivals will be playing. Since we still don't have much of an idea who may eventually affect the playoff positioning of both the Seahawks and their divisional foes, we'll just assume that all 16 NFC teams - yes, even the Vikings - are still in play for now. So here's the lowdown on Week 3:

Chiefs (2-0) @ Eagles (1-1)
The NFC East is wide open - like the top of a dumpster. We might see the second-ever 7-9 division champ come out of this division, and the Eagles look like a prime candidate for such an ignominious distinction. Which means they need to lose more games than they win, so Go Chiefs.

Giants (0-2) @ Panthers (0-2)
Considering the mad respect Panther fans have been giving this place recently, I can't find it in my heart to root against them. Besides, an angry Tom Coughlin is an entertaining Tom Coughlin. Go Panthers.

Lions (1-1) @ Redskins (0-2)
I don't expect the Redskins to stink as badly as they have the first two weeks the entire season. We certainly don't want them giftwrapping a top-5 pick to the Rams like they're doing right now. Go Redskins.

Cardinals (1-1) @ Saints (2-0)
While I certainly don't see it happening, a loss by the Saints would mean less competition at the top of the standings. Go Cardinals.

Buccaneers (0-2) @ Patriots (2-0)
New England looks like the worst 2-0 team I've seen since the 2009 McBroncos - and those two wins were just fluky as hell. Besides, who didn't love watching Tom Brady screaming deliriously at his overwhelmed receivers last Thursday? Go Buccaneers.

Packers (1-1) @ Bengals (1-1)
Green Bay just strikes me as a really obnoxious team this year. I anticipate them winning the division again after Chicago's annual late-season swoon, but nothing says they don't have to struggle a bit first. Go Bengals.

Rams (1-1) @ Cowboys (1-1)
This wouldn't be such a tough decision if I didn't have Romo on my fantasy team. (Remind me never to play in a 16-team league again.) But since I don't think St. Louis will be able to surpass the win total of either the 49ers or the Seahawks, they can have this one. Go Rams.

Browns (0-2) @ Vikings (0-2)
Weeden!! Ponder!! It's the matchup of the year!! Both teams look to be in desperate need of a quarterback after this year, but the Browns moreso. Go Vikings.

Falcons (1-1) @ Dolphins (2-0)
No ill will against the Falcons, but I would love to see the AFC East actually be something of a horserace this year. Go Dolphins.

Bears (2-0) @ Steelers (0-2)
Like the Saints, we would jump out to an early lead in the conference standings if the Bears drop one. Hold your nose, and Go Other Team. (Nope, still can't bring myself to say it.)

And with that, time for me to call it a night. In about 8 1/2 hours, I'll be flying up to Portland for the week, followed by a BoltBus trip up to Seattle on Saturday for my FIRST EVER SEAHAWKS GAME IN PERSON. Needless to say, I'm pretty jacked. Until next week, this is Tim saying I wish I had a catchphrase right now.