"When you get close to the goal line against us, you’d better take your threes. Because if you try anything like passing the ball, you’re kind of playing with fire." - Earl Thomas

Two games into the season the Seahawks' defense has picked up where they left off last year, and actually leaped forward to a ridiculously unsustainable rate. In 2012, the Hawks' defense led the league in fewest points allowed per game with 16.1, and this year we're allowing 5 per game, so far. (I really want to shut out the Jaguars so we can average 3.3 ppg for the first 3 games).

Obviously that number is going to go up, but it was also done against two of the league's mobile young guns who are pretty prolific, so the the amount it goes up is debatable. But this year's version of the defense is much improved.

Sunday night's victory was a signature win for the Seattle defense. Five takeaways and 3 points allowed while bending but not breaking early and often. We saw some of Pete Carroll's core philosophies like speed and length in action, essentially rendering the Niners offense harmless.

And on the Hawks defense they are long and fast. There is a certain calculus to be done at each position, length vs speed vs overall size, and length is found everywhere but Earl. The calculus itself is pretty simple: speed needs distance to outrun length so in the confined restraints of the football field a speed/height/weight/reach proportion can be made for each position. Now a 6' 4" corner with 4.5 speed and crazy long arms is worth more than the 5' 11" burner with 4.3 speed. The field isn't long enough for the burner to outrun his length and 4 seconds isn't enough time for him to outrun his length either. 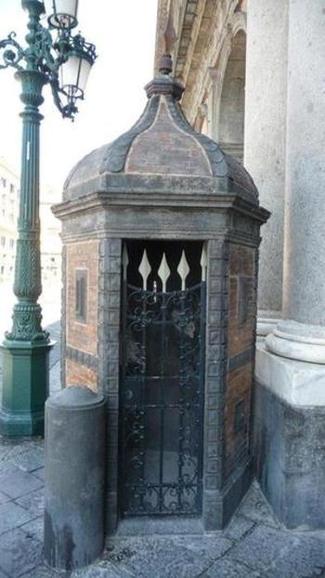 This is a picture I took a couple weeks ago of one of two guard shacks outside the walls of Palazzo Reale in Naples. The first thing I thought when I saw it was how anyone manning this thing was probably pretty much dead meat the second shit went down, if there ever in history was such an occasion (in reality, I was just standing there wondering how many guys got whacked in this thing). Because that thing is a kill box.

The structure is circa Charleston Heston era Ben Hur in real life, when they fought with swords, spears, and archers. And the guy in the box doesn't have room for a spear or an archer, so he has a sword and a prayer. When the opponent is backed into a corner and has no room to maneuver, the spear, length, trumps all. You can't outrun length when there's nowhere to go. Reach matters in boxing, reach matters in the red zone.

We were introduced to this calculus of Pete's in the form of Brandon Browner, who in the earliest stages of the rebuild was completely owned by Mike Wallace of the Steelers. Good process means letting your edge play out, and when you know that edge is real, you aren't deterred by any early negative returns. Speed has the edge in between the 20's, length has the edge inside them, you have to let the edge play out. Inside the 20's is where the points are.

A shorter field has always been easier to defend, for everybody, but against these Seahawks your speed is now blanketed with length, with no more space to outrun it. And that's why Earl says you better take your threes. Once you've crossed the twenty the law of diminishing returns is in full effect, and the interest is compound like a payday loan.

On one end of the spectrum Chip Kelly is rendering yardage meaningless by way of hyperinflation, and on the other, is Carroll's version where the number of attempts is throttled back and yards between the 20's are relatively easy but irrelevant. Both Carroll's system and Chip's use tempo as an additional dimension to create and exploit mismatches.

And both are changing the way we have to think about how we value different measures.

The way the team is built, yardage is an after thought. Rice and Miller's contracts are often cited as example of bad contracts, and perceived lack of production is always the given reason. But yards don't matter, tempo does, total snaps does. We're not paying for yards, we're paying for weapons, we're paying for mismatches. We're paying to put 5 weapons on the field and force you to defend them while we keep pounding the run. You take your shots down field from time to time to keep them in cover 2 and 7 in the box all day and just wear them out.

Now, for some stats that really count, from the box:

And last but not least, total red zone percentage scoring, 2012. Last year the Seahawks had the 5th most efficient defense in the red zone. And last year, the Seahawks allowed the fewest trips to the red zone. In other words, they are one of the hardest in the league to score on in the red zone and they give you the fewest chances. You are correct right now if you are thinking that Pete doesn't fight fair.

This team will also be entering the postseason having accumulated approximately "a whole lot less" of a work load (snap count) than the other guys who wanna go fast. When the smoke clears though, the units that count will consist of points and points allowed. Points in between will remain of questionable value.