The college football players who have looked the most like future Seahawk draftpicks for week three, including the next great NFL cornerback.

In last week’s Gems I focused on the DL and wouldn’t you know it…they stepped up big this week. Red Bryant seems to be getting more snaps from a DT position and looking better there (he absolutely missionaried Mike Iupati one play). Michael Bennett was a hell-spawned demon while seeing more time on the outside as a 3-down DE. Avril flashed, Obie flashed, and the underrated performer of the day had to have been D’Anthony Smith at the nose with his 4 tackles and multiple QB pressures. I’m still a little worried about Brandon Mebane’s future at DT…Red, McDaniel, Smith, and Bennett have all outperformed him and his lofty contract after two weeks. And Jordan Hill can’t be too much farther off. 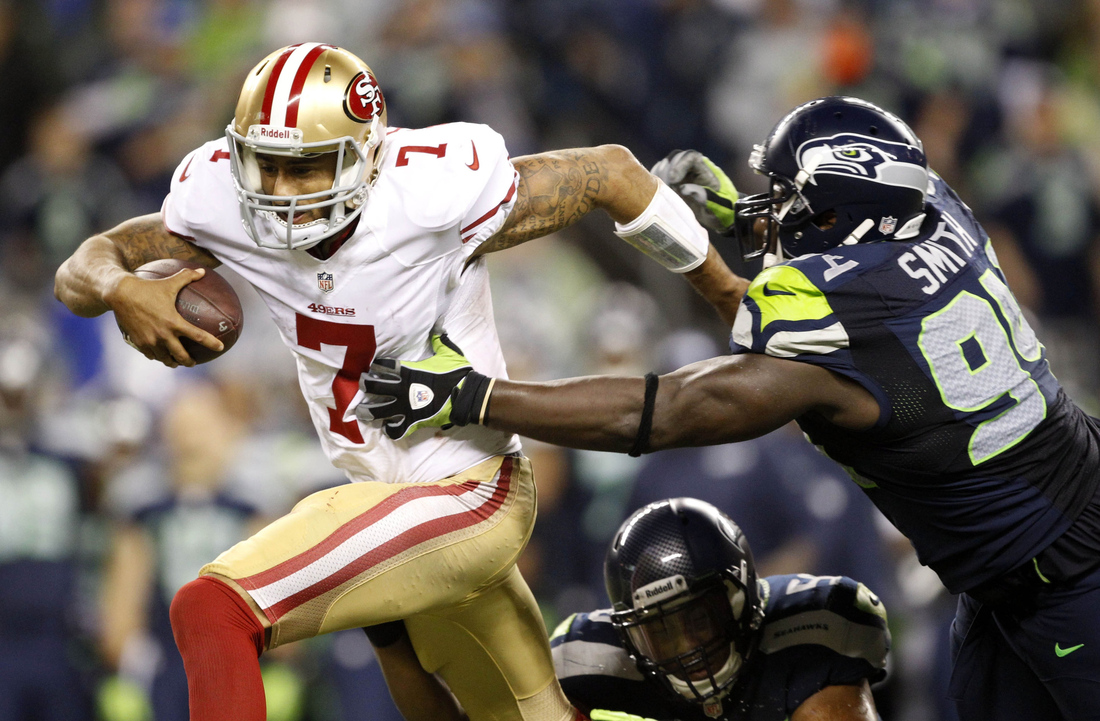 There were really no glaring, or even miniscule, holes in our defensive starters this week. Our middle linebacker led the team in tackles, 3/4ths of our secondary had INT plus another few PBU from the 4th member, our DL had 3 sacks and 5 QB hits. In terms of defense, at best we could do is note the guys at the back of the depth chart, but even they will be upgraded with the returns of Hill, Chris Clemons, Brandon Browner, and Bruce Irvin; guys like Mike Morgan and Clinton McDonald.

On offense…kind of a tougher game to evaluate. Russell Wilson had his worst game in a while, so we didn’t get much from any of our WR/TE. Marshawn Lynch was having an incredible game, so we never really needed to see much from Robert Turbin, Derrick Coleman, or Spencer Ware (Christine Michael went inactive this week); although Turbo looked better than he has all preseason and into week 1. To enable Marshawn to have the kind of day he had, we have to give credit to the offensive line…but I think we can give them credit for their run-blocking while being critical of their pass-pro.

Paul McQuistan seems to be falling farther and farther out of favor with the fan-base. He wasn’t playing great at LG, and he certainly doesn’t inspire confidence as any kind of multi-week replacement for Russell Okung at LT. I’d personally give Alvin Bailey a week’s worth of 1st-team reps at LT, keep James Carpenter at LG (after he out-country-stronged Justin Smith), and let McQuistan become a super-utility lineman. Max Unger has been surprisingly off his game to start the year. But he’s a pro-bowler who has earned some BOTD.

There’s really nothing I want to focus on this week. So we’re going BPA-mode. Or BVA (best video available), in this case. For the most part, I think these are guys that I’ve talked about before, but we have fresh tape of them, and many have fresh tape of HUGE performances.

Texas A&M’s Mike Evans. 6’5"/225 and just a monster. Currently a redshirt sophomore, Evans one of the top 20 WR in the country LAST year…and of course he’s improved that mark to 1st in receiving yards so far this year (20/518/25.90ypc/3TD). He is draft eligible for 2014, but he also has 2 years of eligibility remaining if he should not like his draft advisory board rating. In the meantime, if he keeps putting up these Calvin Johnson numbers, like his 7/279/1TD game this week, he may just take his chances going pro:

Penn State’s Allen Robinson. Another underclassman, I haven’t written much about Robinson because I thought his 2012 tape was really underwhelming…lots of drops and wrong routes…and I didn’t think he would come far enough this year to really consider entering the draft as a junior. I’m reconsidering. Robinson is 6’3"/210 and really quick for his size. I love his RAC and I haven’t seen many, if any, drops this year (one fumble, however). Robinson is currently top 5 in the country in receiving with 23/405/17.61ypc/3TD and is starting to remind me more and more of young AJ Green. This week Robinson went for 9/143/1TD:

I would love to have the tape of Oregon State's WR Brandin Cooks for you here (he caught 9 passes for 210yds and 3 TD versus Utah), but it's not uploaded yet. Cooks already has 7 TD on the year, to share the national lead in scoring with UCF's Storm Johnson.

Texas Tech’s Jace Amaro. Currently exactly 22nd in the country in both receptions (20) and receiving yards (281), Amaro actually leads both categories for TE’s, and he’s already put himself in early round draft consideration. The 6’5"/260lb Jr rarely seems time as an in-line blocker, instead lining up in the slot, but still shows above-average down-field blocking skills. Here is his latest 9-catch/97-yard game against TCU:

I was really tempted to bring up Jay Ajayi again after his 4 TD performance against Air Force, but Ajayi is only a redshirt sophomore, and I already used my one "Get out of Jail…er college…early card" on Mike Evans.

UW’s Bishop Sankey. Of all positions, RB is the one where I feel most-comfortable talking about a Junior leaving early. So it is okay to talk about Sankey. The buzz on Sankey is really picking up. If you haven’t heard the buzz, or assumed there would be buzz just from watching his last 4-6 games last year and first 2 this year, trust me on this…if he declares, Sankey will be one of the first two backs drafted in April. If he’s smart, and recognizes the list of this year’s true sophomore RB’s that will be draft eligible next year, Sankey WILL declare. Plus, it doesn’t hurt that he’s currently leading the country in rushing per game with 184.5 YPG. That is 20 yards/gm more than his closest competitor. His 18.75 receiving YPC don’t hurt either. When you watch this game versus Illinois, where Sankey rushed for 208 yards and a TD on 35 carries plus 63 yards and a TD on 3 catches, tell me if you don’t see some Christine Michael in Sankey’s game:

Tennessee’s Ja’Wuan James. He’s not the physical specimen that a Seantrel Henderson is, nor the smooth athlete of a Jake Matthews, and probably not even the best OT on his own team, but Ja’Wuan James is one of the more underrated OT in the country. I love him as a 3rd-round pick and not-too-distant future replacement for Breno Giacomini. Here is last week’s Tennessee game versus Oregon:

I would really like to present some draft options at OG, but I’m very unimpressed with the players I’ve seen. Anthony Steen of Alabama might be the best RG I’ve watched, but I’m actually more anxious to see Jon Halapio now that he will be returning from a torn pec this week for Florida. Stay tuned for more on that name.

Kentucky’s Za’Darius Smith. As I forewarned you last week, Za’Darius Smith would be one to watch going forward. Although I don’t have his most-recent game, we do now have his most productive game to-date (since transferring up to Kentucky from JUCO level). Studying a full game at the FBS level, I notice a few things: 1) great closing speed, 2) inconsistent reads, 3) great pass-rush repertoire (rip move at 1:00, speed-to-dip at 1:50, bull-rush with shedding blocks at 2:15). The line for what you're about to see is: 6 tackles and 3 sacks. Smith, a fairly recent basketball to football convert, is currently somewhere between 2013 draftpicks Quanterus Smith and Ziggy Ansah, in terms of his total grasp of the game and athletic upside:

Mississippi State’s Nickoe Whitley. As mentioned in one of my prior pieces, Whitley is one of the biggest hitters I’ve seen in CFB the last two years, but as you’ll see in this game against Auburn, he also has some decent ball-hawking skills (12 career INT). At 6’1"/205, Whitley has a chance to be a nice tweener safety that can play some CF, but also come load the box and lay some wood. It’s worth noting that Whitley did not play week 2 versus Alcorn state, and judging by his gait, I think he’s not 100% with some kind of leg injury. Still played pretty well, finishing with 6 tackles and 2 INT:

I don’t have the tape on him yet, but after his first 3 weeks of performances, the college corner I am really salivating for, the name I think I’m probably first in the country to champion; is Nebraska’s Senior CB Stanley Jean-Baptiste. He’s picked off one pass in each of his first 3 games, while breaking up another 4, he’s a recent convert to corner from WR, he’s currently the best CB in college football that no one is giving respect to, and if that doesn’t sound enough like Richard Sherman…SJB is also listed at 6’3"/220. Here’s just the amuse-bouche from two weeks ago:

Draftscout currently lists him as their 624th overall prospect, and 65th just in terms of CB’s. Here’s SJB from two years ago looking EXACTLY like Sherm’s pick versus the Niners this week:

Yep. Pretty sure I just found Jacksonville’s 5th round pick this year.