While Sherman got league honors, he fell way behind a defensive teammate for the "cool" of the week. Get all the info right here! And more, even!

By now you've probably heard that the Seahawks beat the 49ers by a score of 29-3 in front of the nation on Sunday night. Right after Carrie Underwood sang the opening theme song, which is what we all really wanted anyway, Seattle lulled San Francisco (and 99% of the fans) into a 5-0 slumber by halftime.

Once the storm settled and the teams came back in the second half, only one team had any punch left. It's okay to spike the punch, but please don't spin it near an opponent. (Also, don't spike it. That's a rule too.)

Here's an advanced look at Week 2: 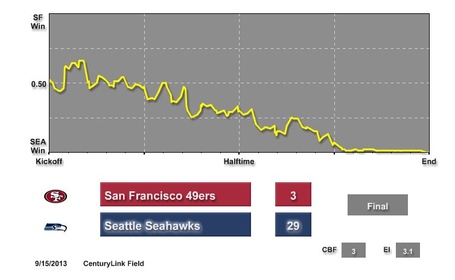 The 49ers were up to a 65% win probability early in the first quarter after mystery whistle helped lead to a blocked punt that put San Francisco on the Seattle 33-yard line to open their second drive of the game. The 49ers had third-and-goal from the five, but Earl Thomas's interception on a deflection from Walter Thurmond immediately flipped it back to a 50-50 game.

Cliff Avril's strip-fumble of Colin Kaepernick flipped Seattle to a 67% win probability and they hardly looked back after that. Richard Sherman's interception of Kaepernick at the start of the fourth quarter gave Seattle 98% odds to win.

Since this is our first foray into the Advanced NFL Stats numbers, let's use the glossary to explain WPA and EPA:

Win Probability Added (WPA) – The difference between a team’s Win Probability (WP) at the start of a play and the WP at the end of the play. WPA is the measure of a play’s impact on the outcome of a game. An individual player’s WPA is the sum of the WPA of the plays in which that player was directly involved. Being directly involved is defined as an offensive player who ran, threw, or kicked the ball, was targeted by a pass, or flagged for a penalty. Defensive players are credited for WPA when they tackle or sack the ball carrier, are credited with an assisted tackle or sack, cause a fumble, defend a pass, or are flagged for a penalty.

Expected Points Added (EPA) – The difference between the Expected Points (EP) at the start of a play and the EP at the end of they play. EPA is the measure of a play’s impact on the score of the game. An individual player’s EPA is the sum of the EPA of the plays in which that player was directly involved. Being directly involved is defined as an offensive player who ran, threw, or kicked the ball, was targeted by a pass, or flagged for a penalty.

Richard Sherman was named the NFL Defensive Player of the Week, and nobody would argue against him being cool, but his interception of Kaepernick came late in the game and did not make much of a difference in the overall outcome in terms of WPA. I think that obviously there is some point of contention there, because a great cornerback simply doesn't see much action -- the quarterback just avoids whoever he is covering and there's a lot of hidden value there, just like there's a lot of hidden value in being a great offensive lineman.

The "Cool Dude" of the week is linebacker K.J. Wright and his WPA of 0.28 and EPA of 9.3. Wright had three tackles, three assisted tackles, one sack, and one fumble recovery. Wright is one of the unsung heroes of this defense, which pretty much rings true for anyone that's not Sherman or Earl Thomas or Chris Clemons. Typically, it's just a lot easier to take note of the guys making interceptions or sacks or being high draft picks, and I can only speak for myself, but Wright was not the first, second, or third guy that I thought of when I thought of who would be this week's Cool Dude.

In fact, Thomas, Walter Thurmond III, and Avril were the next three up. Sherman was not in the top seven on defense. Again, there's a good argument to disagree with that, but it also just shows how amazingly deep this defense is, and I'm sure Sherman would agree with that.

Seahawks "Fool" was receiver Sidney Rice with -0.7 WPA and -2.3 EPA. Advanced NFL Stats had Rice with six targets, one catch, 2.2 yards per target and a 33% success rate. To the glossary!

Success Rate (SR) – The proportion of plays in which a player was directly involved that would typically be considered successful. Specifically, SR is the percentage of plays resulting in positive Expected Points Added (EPA).

I'm not sure if they accounted for his penalty and that Rice was actually worth negative yards per play, in that sense. It was not a good week for Rice in many senses of the word and I really hope he can be a cool dude this week against Jacksonville. He's too talented to be the fool.

Overall "Fool" of the week: Colin Kaepernick. The 49ers QB was a -0.38 WPA, -19.7 EPA, and his mistakes against Seattle were the main reason that San Francisco lost. The interceptions to Thomas and Sherman, coupled with the strip-sack by Avril, really were major turning points in favor of the Seahawks. It's really a credit to the entire Seattle defense to force consistent pressure by Red Bryant, Avril, and Michael Bennett, thanks to incredible coverage by the secondary.

Kaep, you have lately been very cool, but the Seahawks made you look like quite the fool.

Put my heart in a blender: Inside-Outsiders DVOA update

My go-to site is still Football Outsiders. This week they have the Seahawks as second in VOA (DVOA doesn't come out until Week 4) at 47.9%. That is well behind the Denver Broncos and just a hair ahead of the Kansas City Chiefs.

These are the Football Outsiders team efficiency ratings through two weeks of 2013, measured by our proprietary Defense-adjusted Value Over Average (DVOA) system that breaks down every single play and compares a team's performance to the league average based on situation in order to determine value over average. (Explained further here.)

OFFENSE and DEFENSE VOA are adjusted to consider all fumbles, kept or lost, as equal value.

SPECIAL TEAMS DVOA is adjusted for type of stadium (warm, cold, dome, Denver) and week of season. There are no opponent adjustments in VOA until the fourth week of the season, which is why offense and defense are listed as VOA right now rather than DVOA.

As always, positive numbers represent more points so DEFENSE is better when it is NEGATIVE.

Seattle is second in DAVE, 13th on offense, second on defense, and second on special teams. The Seahawks were the only team to be top five in all of those categories last season, and I think a lot of people would be surprised to see them ranked in the top half on offense right now.

Believe it or not, FO has Seattle as fifth in passing offense and 13th in rushing offense.

The 49ers dropped to 28th in VOA after their loss to Seattle. They were 12th last week.

Football Outsiders gave special acknowledgment to two Seahawks this week. One that we've talked about a lot and one that we haven't:

LG James Carpenter, SEA: Came off the bench to abuse the San Francisco defensive line as the Seahawks ran for 172 yards.

CB Richard Sherman, SEA: Only allowed one completion in man coverage according to game charting, which was a "failed completion" that didn't convert third-and-long; also had an interception. (He did allow a second completion, but that was in a zone.)

Seattle has already acknowledged that Paul McQuistan will start at left tackle against the Jags this week, while Michael Bowie and Alvin Bailey will work in as the backups. I believe Pete Carroll cited Carpenter's work around the offensive line as something that helped him develop as a lineman, and they'd like to see that with Bailey and Bowie.

The Seahawks defense is ranked first against the pass, at -57.5% VOA, but just 25th against the run.

What Wilson did have was a touchdown pass. Hey, did you notice this? In 20 career games, Wilson has failed to throw a touchdown pass just twice. In losses to the Rams and Niners last year, he failed to score a touchdown. Including playoffs, he has scored in 13 straight games.

Wilson compared to the league:

Wilson 12th in DYAR, 7th in DVOA, and 19th in QBR. While there were complaints last week about QBR because Peyton Manning wasn't first (and that's more than defensible), he is first this week. Aaron Rodgers is actually only fifth, despite 480 yards, four touchdowns, and no interceptions against the Redskins.

Alex Smith is ahead of Colin Kaepernick in every category.

He is 16th in completion percentage, 24th in yards, tied for 23rd in touchdown passes, and about half of the league of quarterbacks has one interception or fewer. He's tied for fourth in yards per attempt and is seventh in quarterback rating.

It's a lot easier to throw interceptions.

- Eli Manning has seven of them, but nine players have thrown at least eight interceptions in the first two games of the year. The only person to do it since 1986 is Daunte Culpepper. He had no touchdowns and eight interceptions with the Vikings in 2005.

-- George Blanda threw 10 interceptions in the first two games in 1962.

-- In the first game of 2001, the Lions Ty Detmer had one touchdown and seven interceptions.

- Rodgers and Eli are two of seven quarterbacks in history to throw for at least 800 yards through two games.

- 22 players have two sacks so far. In a league where pass attempts are aplenty, expect sack records to continue to get broken every year. Mario Williams has 4.5 sacks.

- The Broncos' Tony Carter, an undrafted player in 2009 that started his second career game this year, has eight pass deflections.

- The Texans' Randy Bullock is 1-of-5 on field goals, but his one make was a game-winner at the end of regulation.

- There has been just one punt return (Trindon Holliday, Broncos) and one kick return (Cordarrelle Patterson, Vikings) for touchdowns thus far. In the Bears-Vikings game, Patterson returned the opening kick 105 yards for a touchdown. On the ensuing kick, Devin Hester returned it 76 yards but was tackled. In the middle of the second quarter, Hester returned a kick 80 yards and was again, tackled.

Jay Cutler threw an interception at the one-yard line a few plays later.

- Hester had 100 more kick return yards than Patterson, but one less score.

And that's today's wrap-up of the wild and wacky NFL!