The cool, the fool, and the playground rules. It's time to look at how awesome the Seahawks and Russell Wilson are looking a little less than a fifth of the way into the season.

Well, the Seattle Seahawks did what everybody thought they were gonna do, which is FLIP OUT against the Jacksonville Jaguars. That 45-17 win propelled them to new great heights and after three games, few teams have ever ranked as highly as the Seahawks (and the Broncos) per Football Outsiders.

Here is your weekly dose of advanced -- and plenty regular -- stats for Seattle and the league after three weeks. 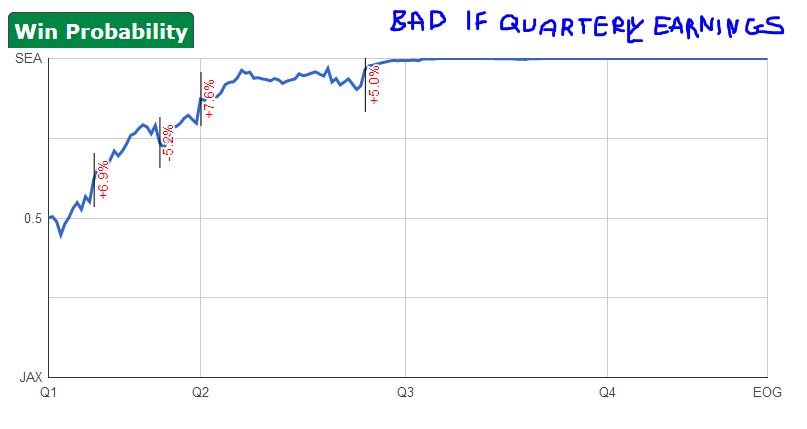 If you were a CEO making your quarterly presentation to your investors, they'd love what you did in January, early February, but what happened in March? Why did our profits flatline, Bob? Stock market! Bear! Reports! Coffee!

Russell Wilson's 20-yard pass to Doug Baldwin at the beginning of the second quarter put the Seahawks at the four-yard line and was worth a 7.4-percent increase in their win probability. Wilson hit Zach Miller one play later to make the score 14-0 and Seattle was 88-percent win... probable?

We had some complaints about the use of WPA (Win Probability Added) and EPA (Expected Points Added) last week because Advanced NFL Stats usage of these calculations for single games can be somewhat misleading. So instead, we will simply use all the stats in front of us and use our better judgment.

Sound fair? Have I appeased you?! Good!

Now, who could disagree with this? Wilson threw for four touchdowns and was worth 0.5 WPA and 7.2 EPA in the win. If there was an issue with Wilson's performance, at least statistically, it would be that he did have two turnovers. Tarvaris Jackson was actually worth more EPA (10.9) but less WPA (-0.1) because when he came in the game was over.

As games are wont to do when Jackson enters.

Big ups to Golden Tate, Luke Willson, Sidney Rice, Zach Miller, and Marshawn Lynch on offense. Lynch's 27-yard run in the first quarter was worth +6.9 in the Win Probability Chart and helped solidify Seattle's dominance. Jackson had a crazy-good 16.1 Adjusted Yards Per Attempt during his 7-for-8 stint in the second half.

Bobby Wagner, Brandon Mebane, and Clinton McDonald were among the stars on defense.

Henne completed 47.4% of his passes with two turnovers and a fumble. You thought you were cool, but you were nothin' but a fool!

It will be interesting to see the Seahawks against some of the elite quarterbacks in the league, but honestly their schedule isn't exactly littered with them this year. There's Matt Schaub, Andrew Luck, Sam Bradford, Carson Palmer, and Eli Manning, but only Matt Ryan and Drew Brees would qualify in that "upper echelon" just below Wilson.

Put My Heart in a Blender: Inside-Outsiders DVOA Update

It finally happened. After finishing last year first in DVOA, the Seahawks are back on top. I told you on Monday that I wasn't sure where Seattle would be ranked after finishing second in VOA after Week 2, but that they were 13th on offense and just had a huge day against the Jaguars.

Well, they shot up to fifth on offense, first on defense, and second on special teams, giving the Seahawks a Total VOA (DVOA comes out next week, I think) of 69.2%! The Broncos sit at a pathetic 68.8% VOA, only good enough for second place.

The Seattle defense is first with -39.6% VOA, well-ahead of the second-place Jets at -29.9%. They are top five in all three categories, the only team to be in the top ten across the board. The Broncos are first on offense and special teams, but 12th on defense. They don't have Von Miller back yet, though.

The Seahawks pass defense is first at -64.6%, with the Chiefs second-place ranking in that category coming at -48.4%. They are 17th in rush defense.

Seattle's odds of making the playoffs are 99.8%.

If you're playing Texas Hold'em and you make three-of-a-kind on the flop, the odds of making four-of-a-kind on the turn is about two percent. They are actually slightly better than two percent. I have been playing poker for over ten years and played probably hundreds of thousands of hands and I can tell you that two percent feels like it's a gross exaggeration, though in the case you just have to believe the math I guess.

I'm just saying that it never feels like your odds are even that high. In the times that I've flopped a set (I realize now that I'm using what the Texans would call "jargon" -- basically, if I have a pair and the third card comes out immediately to give me three-of-a-kind) I can honestly say that I have probably made four-of-a-kind maybe three times in my life.

Poker has always given me great insight into statistics because they help you realize that everything is even more improbable than it seems. I used to think "two percent isn't that low" but it is. It's very, very, very low.

The odds that the Seahawks will miss the playoffs are ten times less likely than making four of a kind like in that scenario above.

The 49ers are now at 7.1 and their playoff odds dropped by 24.4%, leaving them at 18% probability to make the playoffs and just 0.6% to win the NFC West. If you paid attention to the paragraphs about poker above, I like dem odds.

Football Outsiders says that there is a greater-than-five-percent chance that either Seattle or Denver will have a perfect record this season.

The Texans are 20th in Total VOA, 17th in DAVE (takes into account preseason predictions), 19th on offense, 10th on defense, and dead-last on special teams. How much does special teams really matter? Well if you're Houston and you're seeing the number two special teams... err, team... coming in, you're probably wishing you ranked better than 32nd.

Kicker Randy Bullock is 0-of-3 on field goals over 50 yards this season and, to be perfectly honest, kind of looks like me! If you have a guy on your team that resembles me in any way, that's a bad sign.

In the pantheon of Wilson:

- It was the second time in Russell's career that he threw four touchdown passes. He had almost identical numbers (15-of-21, 171 yards, four touchdowns, one interception) in the win over the 49ers last season. Wilson is the 10th quarterback in NFL history to have multiple 4-touchdown games in the first two seasons of his career.

The others include Jim Zorn, who had two 4-TD games in 1977, and Dan Marino, who had six such games during his 48-touchdown sophomore season.

Moving into... Wilson in the pantheon of history:

- Wilson has 11 regular season games in his career with a pass rating of 100 or better. The NFL record for that over the first two years of a career is 15, a tie between Marino and Carson Palmer.

- Marino makes it almost impossible to beat him in this category, but if Wilson throws 30 touchdown passes this year that will give him 56 over his first two years. Marino had 68 touchdowns in his first two seasons, but Wilson would rank second in NFL history. Peyton Manning is currently second, with 52 touchdowns and 43 interceptions.

Wilson compared to the peons of today:

- Russell Wilson is 32nd in pass attempts. Which is perfectly fine with all of us as long as the rest of these rankings hold true.

Per Football Outsiders, Wilson's DYAR of 175 ranks eighth and his DVOA of 25.5% ranks fourth.

Sidenote: FO currently has only one player that qualifies in their "8-24 pass attempts" category... Tarvaris Jackson has a QBR of 97.6, a DVOA of 177%, and his 99 DYAR would rank 15th; Ahead of Michael Vick, Robert Griffin, Ryan Tannehill, Joe Flacco, Cam Newton, and well, you get the idea.

- Last week we were at 10 quarterbacks on pace to top 5,000 yards. That has quickly been chopped in half, and now there are five left standing (until next week when probably a bunch of guys throw for 500 yards): Peyton Manning, Aaron Rodgers, Drew Brees, Matthew Stafford, and Robert Griffin III.

Honestly, if you're the Redskins, you didn't draft RGIII to throw for 5,000 yards. His overall numbers are... worrisome.

- Griffin beat out Wilson and Luck for ROY honors last year, and he had a great argument to do so, but there is clearly a difference between season one and season two following ACL surgery. He's had four interceptions (five all of last season), four fumbles, and after rushing for 54.3 yards per game last year he's down to 20.7 yards per game this year.

RGIII's YPA is down from 8.1 to 7.0, his YPC is down from 6.8 to 4.1. He's throwing touchdowns less often and interceptions more often. And after attempting 393 passes in 15 games last year, Griffin is on pace to attempt 741 passes this year, while the Redskins have mostly played from behind all season long. Not just behind, but usually being blown out going into the second half and abandoning the run, which has still been successful with Alfred Morris.

The debate of "Griffin versus Wilson" (as an example) doesn't really have as much usable evidence when one of the quarterbacks has an elite defense and the other guy has perhaps the worst. They are now forced to play different games and for Griffin, he's suffering because of it.

- This isn't a trend that I hate very much:

In all of franchise history before Pete Carroll arrived, the Seahawks finished as a top 10 scoring defense just four times.

- Peyton Manning is on pace for 64 touchdown passes and 6,095 yards. You may remember that I was writing about when, not if, we would see a 6,000-yard season. Even after three games, why should we expect Manning to slow down? Honestly, their schedule has been soft but it's not like it's not like he exactly hits a "rough patch" this year.

The Broncos play the Eagles this week, and have upcoming games against the Jaguars, Redskins, two games against the Chargers, and another left against the Raiders. His pace will continue to slow down in the touchdown category as he moves further away from his seven-touchdown opener, but 50 is well within reach.

His 73% completion percentage would also be an NFL record.

- Josh Freeman was benched for Mike Glennon. Freeman was on pace to throw for fewer than 11 touchdown passes.

- Speaking of "the QB class of 2012 that also included that guy in San Francisco," Andrew Luck and Colin Kaepernick each have just three touchdown passes so far. Kaepernick is on pace for 16 touchdowns and 21 interceptions.

- LeSean McCoy has 395 rushing yards, the eighth-highest total after three games. Hey LeSean, it's a passing league you big jerk.

- Marshawn Lynch is on pace for 1,120 yards, which would be his lowest-full season total as a Seahawk.

- The Patriots' Julian Edelman is on pace for 144 catches this year. He had 69 catches in his career going into this season. I wouldn't quite say he's Wes Welker yet, because his 7.4 yards per catch means he's on pace for just 1,072 yards on 144 catches.

- The Chiefs' Justin Houston is on pace for 40 sacks. He has more sacks than 14 teams.

- This hasn't been a very funny article so let me leave you with a joke:

Why did the Seahawks give the Texans all their domestic bread? Because they wanted to go to foreign dough.