The week's college football prospects that have put themselves onto the Seahawks' draft radar. Focus on O-line.

This week brought us another all-facet, dominating home win for the Hawks. But this week’s version, coming against the lowly Jaguars, really feels like less of an evaluation tool than the first two weeks. If anything, this had the look and feel of a preseason game.

Upside of this kind of blowout was getting to see CMike run the ball 9 times for 37 yards (a respectable 4.1ypc…same as Marshawn), and I get the sense he was only just warming up. I think we will find going forward that CMike will take off after about 12 carries and start busting explosives. Downside: Turbin looks less and less like a future tool in this offense. With 5 backs currently on the 53, it’s not a huge problem to lose one eventually.

Upside: Luke Willson looked GREAT. 5 catches on 5 targets, 76 yards, 15.2ypc…exactly the kind of numbers you hope for from a receiving TE. In fact, all three of our TE made solid contributions. Miller had his only 2 catches both in redzone for TD’s, and was his usual solid in-line blocker. The noob, Kellen Davis also had 2/31/15.5ypc on 2 targets. For what we’ve read and heard about Davis (being a similar kind of disappointment to Evan Moore), what we saw Sunday looked more like Anthony McCoy. Downside: none of note. 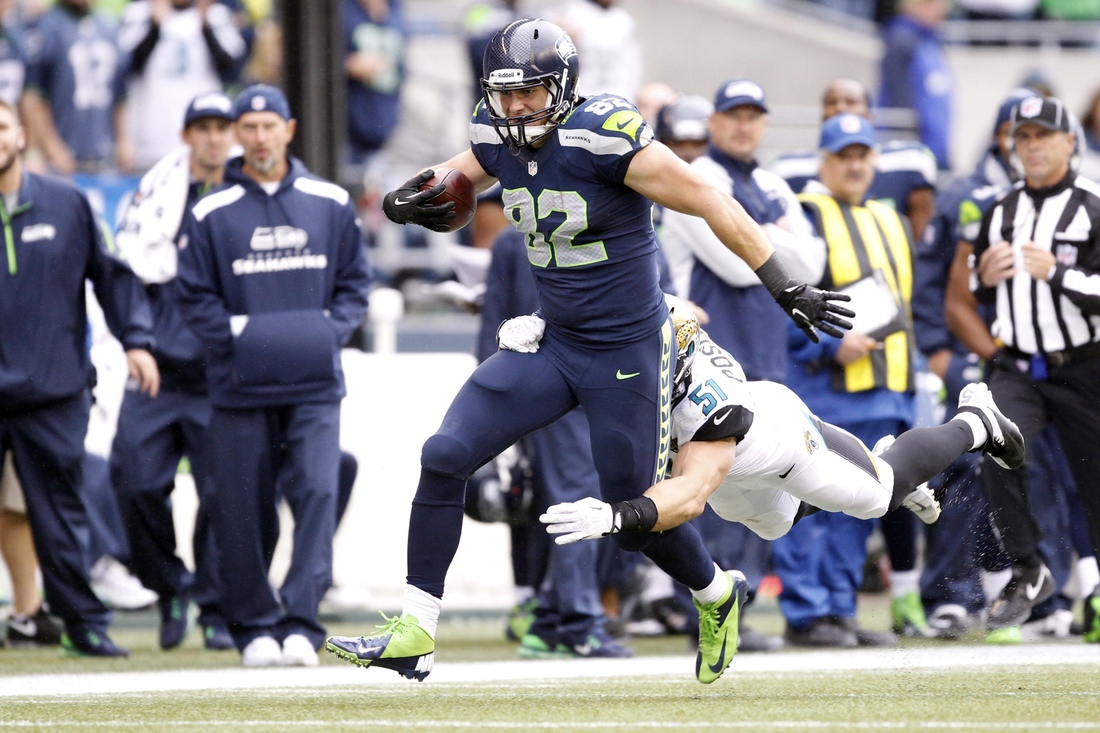 Upside: Clem was back. Mac was WAAAY back. And the FA signees; McDaniel, Bennett, and Avril all played up to, if not beyond, expectations. Downside: Red hit with back spasms during the game. Downside: someone from this group is getting cut in a week when Bruce returns. Upside within a downside: Bruce will return in about 5 days…and then ya’lls quarterbacks are fucked. Sorry, but true. Time for Nascar and rubbin’ is racing!

Upside: Michael Bowie graded out very well in relief on the O-line. Alvin Bailey also saw about 16 snaps, but as of yet I haven’t studied when and where he played, but just getting him some experience will help his upside. Downside: McQuistan is not a LT. He wasn’t really looking much like a guard though either. Bench-utility player…maybe. Breno…the Big Russian is an enigma to me. Or perhaps the mystery is what Cable and co. see in him that I do not. Two pretty big downsides coming from the OL. I think this is where we have to begin this week’s gems.

The tapes we’re about to see may showcase OL players at one specific position, but let’s not dwell on that. Cable has shown an ability to take a LT over to RT, a LT to LG, a RG to LT, and even that DT to RG move.

My absolute favorite "find" this week is Wesley Johnson from Vanderbilt (like Jordan Hill, Johnson has the same name as an NBA player…confusing, huh?). It’s the same school that Ryan Seymour came from, which would lead us to believe the Seahawk scouts have already seen some of Johnson up close. Listed at 6’5"/295, he is not what we’ve come to know from Cable in terms of Tackles. But he does measure up similar to the brand new signing; Caylin Hauptman from Cleveland. Hauptman is listed at 6’3"/300, which would put him tied with LJP as our shortest OL, and only 2 pounds heavier than our lightest OL (Sweezy). Is it a new direction we’re going in for our zone blocking scheme? Maybe. Smaller, more athletic OL are far more palatable in the ZBS.

The interesting thing about linemen coming out of Vandy is they have incredible versatility. Seymour had spent time at T, G, and C while there…from what I’ve read, Johnson played RT last year and made the switch to LT this year, but I’ve also seen Vandy run plays where the entire line shifts two spots and they had Johnson snap the ball FROM THE LT spot. I wouldn’t suggest Johnson become a Center, but it’s nice to know he’s had some practice reps there (actually played each of T, G, C as a sophomore). Based only on similar measurables to Sweezy, I could see the Hawks liking Johnson at RG, but I would have no problem with him at RT, knowing he could pinch-hit for Okung at LT if needed. Watch him contain Jadeveon Clowney in this game from LT…Clowney gets so frustrated he has to switch to rushing against the RT:

Johnson also did very well in Vandy’s game against Ole Miss, locking down Freshman phenom Robert Nkemdiche. Johnson is currently draftscout's 316th overall prospect (but I bet he won't be in two weeks).

I’m still pretty disappointed in this year’s crop of true Guards. After Cyril Richardson, it really becomes slim pickings (or I just haven’t spotted any sleeper OG’s yet). I’ll post this clip of Gabe Jackson simply because he’s sort of the concensus #2 OG, and he’s been linked to the Hawks in a couple mock drafts, but I just don’t see much here:

For me, one way to scout OL talent, is simply to look at the nation’s leading rushers, and then watch their O-lines. For that, we start with Wisconsin’s Melvin Gordon (Wisconsin is 3rd in the nation in rushing overall). This is a tape of Wisconsin LG Ryan Groy versus Arizona State…a game in which he had to face a good DL featuring Will Sutton, Carl Bradford, and Jaxon Hood.

It's not a bad game by Groy actually, but he does whiff on a few blocks when smaller/quicker DE's rush inside, and he's pretty much the definition of "lumbering" when asked to pull (he is 6'5"/320). His pass-pro is good though for such a run-heavy team, and I think he wins all of his one-on-ones with Sutton. Note some of the canyon-sized holes Groy helps open on run-plays. Groy currently holds a 5th round projection, but I'd have no problem with him in the 4th.

Speaking of the 4th, as much as OL currently feels like the Hawks' highest need, based on my scouting, the way the draftboard currently looks, and the way Cable has gone about finding usable OL in, as late as, the 7th round, I'm currently really targeting the 4th round to find an OL upgrade. I would have said 3rd round, but as of now our 2014 3rd belongs to Minnesota.

Chances are, by making the playoffs, the Hawks will miss out on the top 4 Tackles, and maybe the first 1-2 Guards, and if that's the case, our options likely become: 1) reach for OL like they did on James Carpenter, 2) trade back from our 1st, 3) trade up from our 2nd, 4) wait until the 2nd/4th. John Schneider rarely trades up that early, so it would seem the option is trade back or wait. Last year, there were ZERO OG/OT drafted between the 21st and 41st overall picks (Menelik Watson was a huge Seattle target and came off the board at 42 overall), but because we can't really project a tradeback, and because I like OL talent later on the board, my current thought is to wait on OL and address DL or WR in a truly luxurious way in the 1st and/or 2nd.

In addition to Groy projecting in the early 6th, Johnson could and should rise up from his current 7th round buzz to around the 5th, and I also still really like Tennessee's Ja'Waun James as a true 4th rounder, and North Dakota's Billy Turner. I profiled Turner weeks ago, but upon revisiting his tape this week...I like him even more. In the Sept 12th edition of the Gems, Turner was draftscout's 536th rated player overall...after I featured him, the latest check this week has Turner up to #187(!!!!) and looking like a 6th rounder nationally, but my guess is he will blow out the combine/pro day and wind up pushing into the 3rd. He just has so much plus athleticism, I can't imagine, regardless of how small the school (it's still the 2-time national champion small school), that he won't forcibly open eyes. Here is the tape for NDSU's Brock Jensen at QB versus Ferris...just look to his left for Turner at LT:

The play that Turner makes at 1:21, just one-handed slapping an undersized DE off his rush, is humorous AND terrifying. Then, at 1:55, he just flips the guy up, over, and onto his face like he was making pancakes. Turner plays a little bit nasty. Or a lot bit nasty. Cable will like.

Last week I mentioned Nebraska CB Stanley Jean-Baptiste and now I have a long-form video on him. What I see in the bigger picture is a guy still learning the transition from WR to CB. He will give up plays a fair amount, and he really doesn’t tackle well yet, but there is some legit ball skills here. This game happened a couple weeks ago and SJB has since added another INT last weekend to maintain his national lead in INT and 2nd in total passes defended (4/9).

Lastly, with as stacked as the Hawks are currently looking in their pass-rush, this guy is not going to be a Seattle need (he’ll likely get scooped up by Jacksonville if he declares), but this tape is just too damn sexy to be ignored. I first noticed Vic Beasley last year while watching Clemson’s Maliciah Goodman, and I feel pretty confident in saying he has gotten exponentially better this year. The speed is not that surprising, but the power from a guy listed at 6’2"/235 (but rocked up) is nuts. Plus the quality and velocity Vic is putting into his rush repertoire is stunning...like a really hard spin move. He’s like Bruce coming out of WVU only with better run-game defense. Just enjoy this one…I call it Beas Mode: