Reloaded: 'Everyone has a plan until they get punched in the mouth'

Share All sharing options for: Reloaded: 'Everyone has a plan until they get punched in the mouth'

DK Note: I'll be out of town for a few days for Labor Day, so I thought I'd reload some of our old work to give you guys something to read if you're not out enjoying one of the last nice-weather long weekends in a while. I'll be back on Wednesday. Toodaloo.

This article was originally published on March 29th.

I took a month or two hiatus from watching Seahawks' game-film after the season ended. I got really into watching draft prospects (still am) and frankly, just wanted to spend time on more NFL-wide stuff, so I've been watching a lot of other teams. I don't have time to do this during the season, so in order to sound somewhat knowledgeable on the league as a whole, I find it helps to actually watch other teams. It's weird, I know.

Regardless, I am now back on the Seahawks-centric train, watching the All-22 every night, and it's been really fun coming back to it because you notice little nuances and patterns and habits that you missed the first time around. Little things that Seattle does differently than the rest of the league. Little things Russell Wilson brings that some QBs can't. This is the fun stuff.

I've begun to notice a few of Darrell Bevell's 'bread and butter' plays as well, and late in the year, one goal-line set he went back to the well for a few times was out of '23' personnel - two backs, three tight ends - with Sean McGrath seeing some playing time.

Seahawks vs. Rams, Week 17. Under 2:00. Game tied at 13. The Rams D played exceedingly well in this one but Seattle had just put themselves in a great position to grab the lead, and hopefully the win. A touchdown here would put them in a great spot, so Darrell Bevell dials up a playcall that offers Russell Wilson many options. 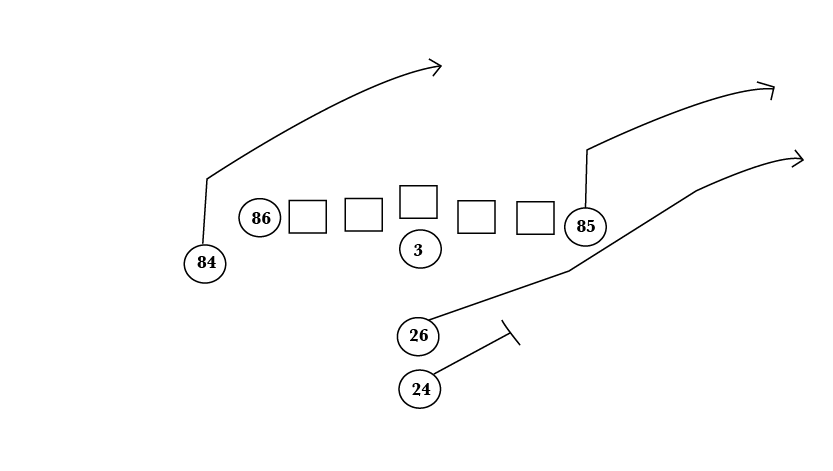 It's a three tight end heavy-set with Zach Miller and Anthony McCoy opposite each other, down on the line of scrimmage, with Miller flanked by third tight end Sean McGrath in a two-point stance. Marshawn Lynch and Mike Rob are set in I-formation behind.

The primary on this play is Anthony McCoy. Depending on the coverage, Wilson can decide whether or not to lob him an over-the-shoulder fade. The secondary receivers would be Michael Robinson, running a drag in the flats, and then McGrath running a drag across the middle.

With the Seahawks bunching up their formation in the middle of the field, the Rams have followed suit. In this short-yardage situation, with the Seahawks in a heavy 'run' set, the Rams bite hard on play-action. 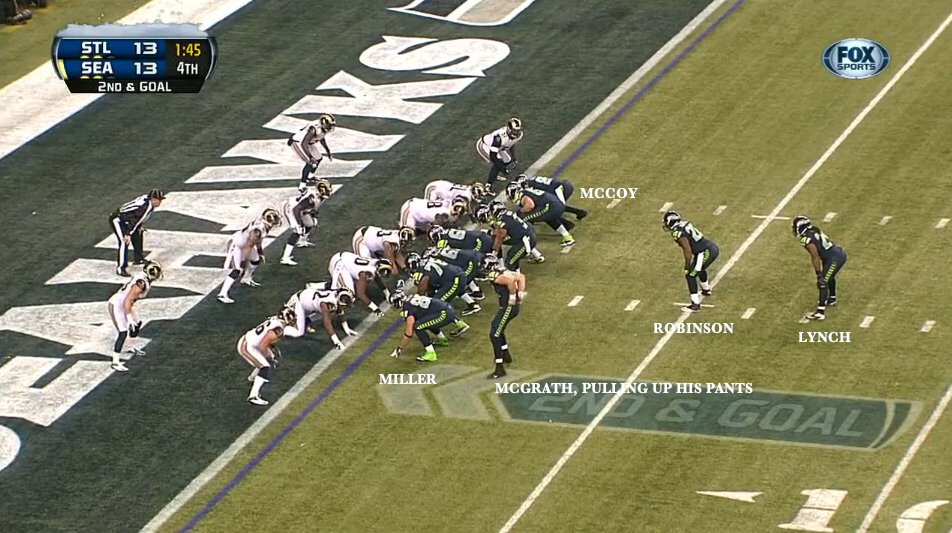 Below, you see Wilson fake the handoff to Lynch, which sucks James Laurinaitis and others up into the box. Mike Rob chips on the defensive end before running his route. Anthony McCoy runs his route, setting up the corner a few yards deep before cutting outside.

The Rams jump offsides. With Robinson and Breno handling out the outside rush, the lack of spacing appears to hinder the throwing lane for Wilson to McCoy. See below. Breno even bends down trying to get out of the way, fully cognizant of where the ball needs to be going: 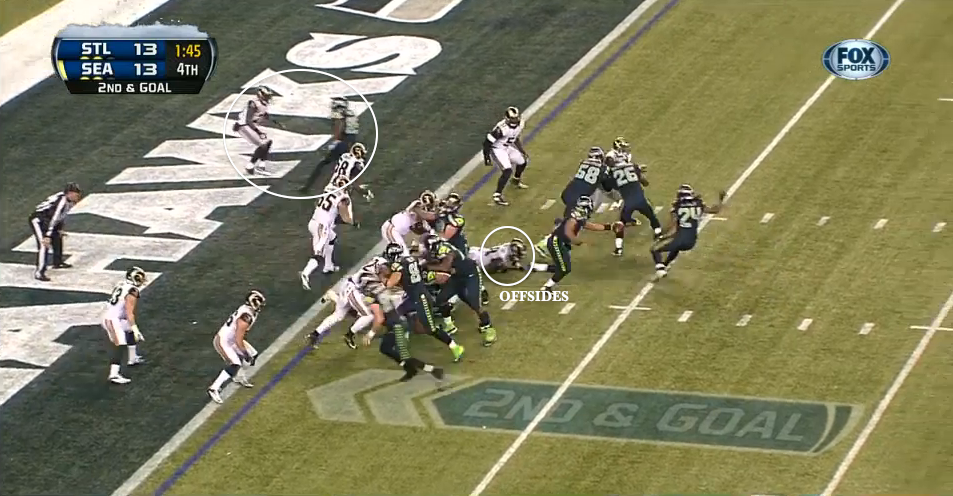 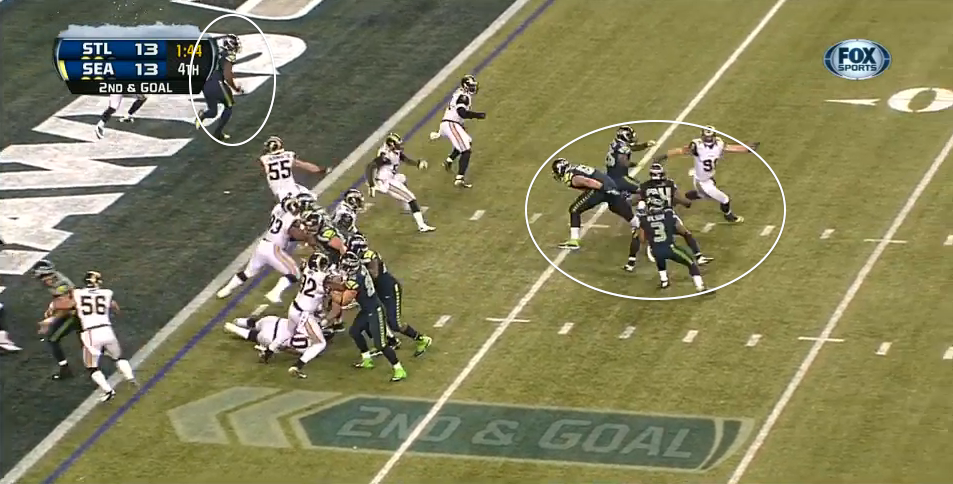 Below, you can see the throw is there, but with McCoy fairly closely covered by Janoris Jenkins, Wilson decides better than trying to fit a pass over the top.

It's a throw he can make and has made in the past, but for whatever reason, he pulls the ball down. Again, I think it had to do with a compromised throwing lane as Breno, Lynch, and Robinson bunched up to his right. All this happens in an instant - if all 6'8" of Breno is standing in Wilson's sight line for even a second, pretty much no QB of any height is going to have a clear view of the defensive coverage. 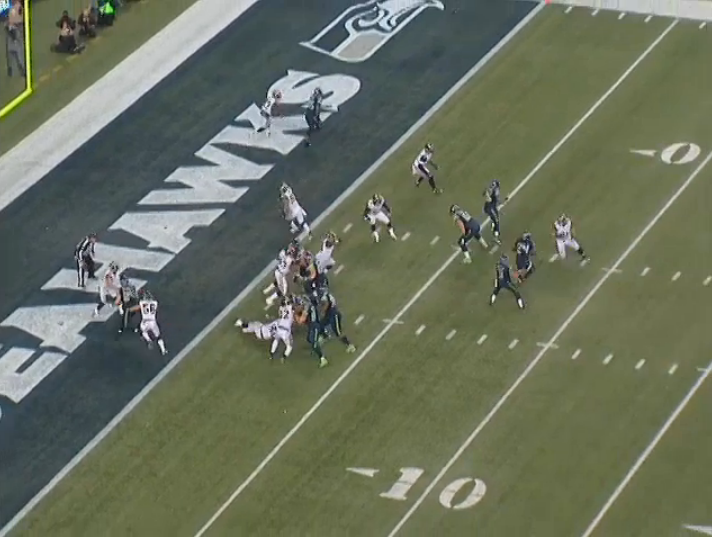 Wilson tucks it and runs opposite of playside. 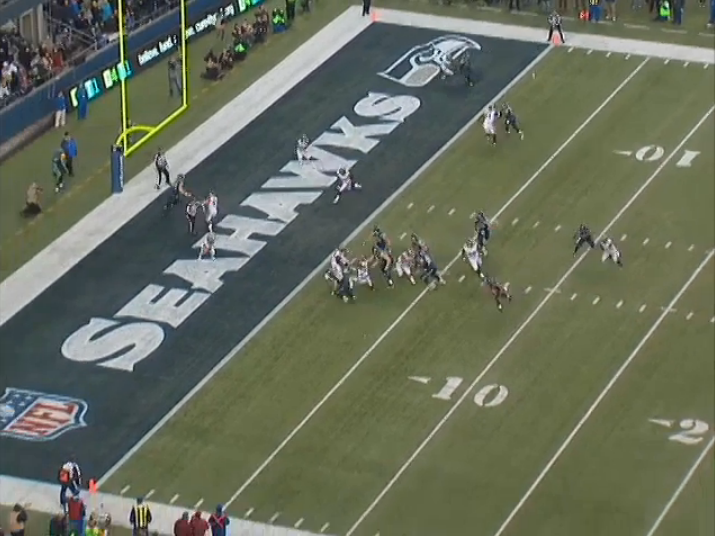 As Wilson improvises, one thing dawned on me: One super underrated skill that Zach Miller has shown is the ability to almost feel when Wilson starts scrambling. Here, below, Miller appears almost to have eyes in the back of his head, blocking-then-releasing as an outlet for Wilson as the first-option is abandoned.

Wilson briefly considers shoveling Miller the ball as Miller provides him an outlet, (would have been his rookie record 27th TD pass) but wisely just keeps the ball and runs it in for the eventual game-winning TD.

Wilson is able to run in scot-free in a large part because Sean McGrath's route draws the attention of SLB Josh Hull - #56 below. Miller effectively blocks Hull's route to the quarterback as well after Hull realizes Wilson is running it.

Seattle finished the year 11-4, and maybe more meaningfully, 8-0 at home.

Fast forward a few weeks and the Seahawks find themselves in a familiar down and distance. This time, trailing big, 27-7.

Seattle goes back to a play that worked for them against St. Louis on 2nd and goal from the 1-yard line - the tight-set 3TE personnel grouping with three shallow drags. This time, they call for it to run left. 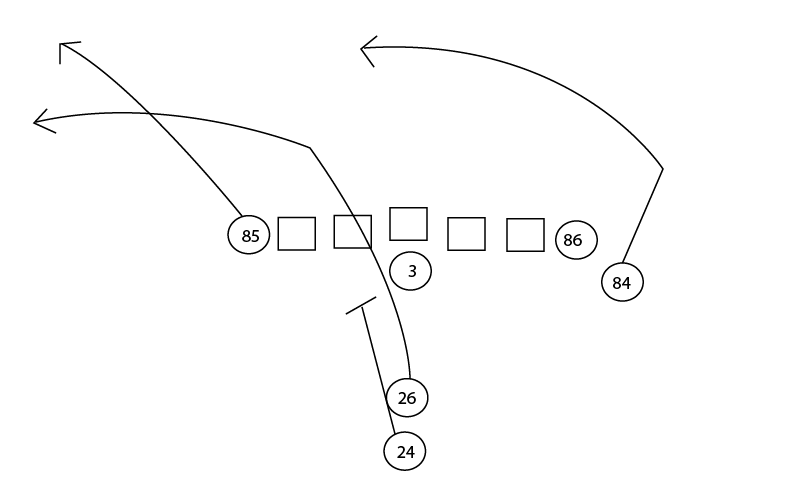 The Falcons counter this look differently than the Rams had - they've got a linebacker matched up on McCoy and it looks like they're in a 'heavy' goal-line personnel package with zero corners. #25 S William Moore is at the bottom of your screen as the edge player, and opposite him to the play side is OLB #54 Stephen Nicholas. 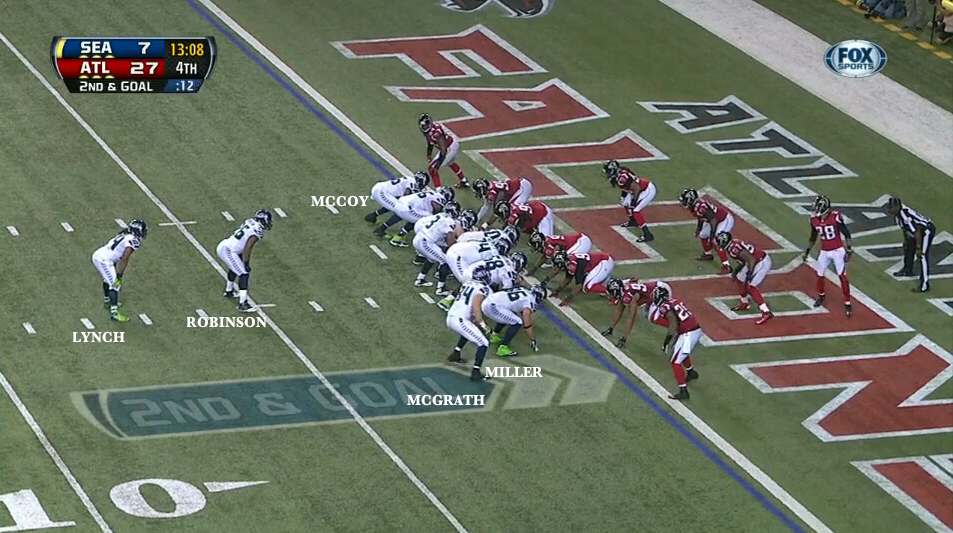 The ball is snapped. The Falcons bring pressure with an overload blitz to the playside. See below: MLB Sean Weatherspoon follows an unblocked Jonathan Babineaux through the same gap. Lynch picks up Babineaux like a pro, and then Wilson scrambles away from Weatherspoon as he sees the blitz. 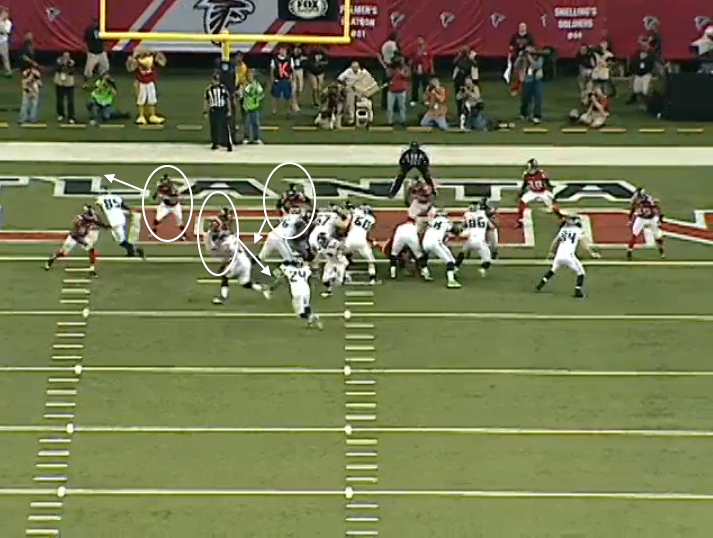 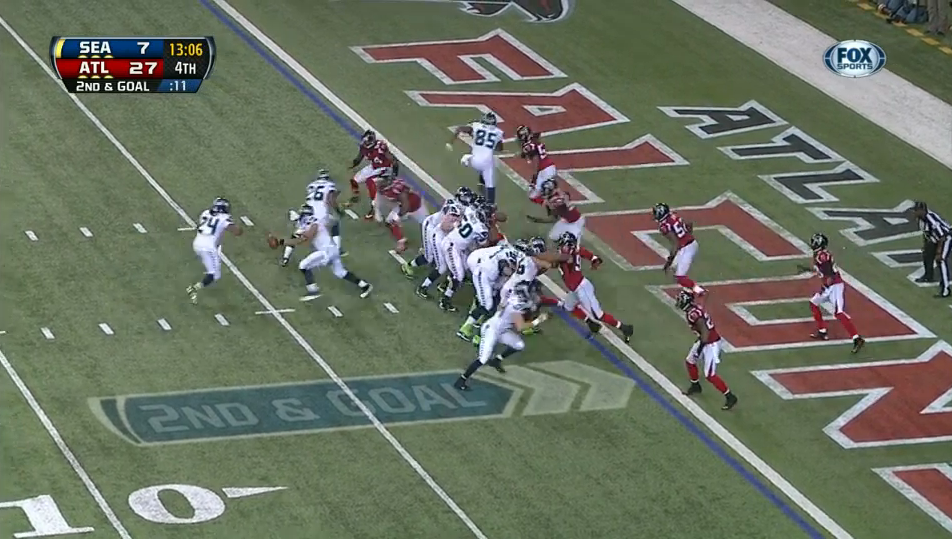 For what it's worth, the play action works like a charm. McCoy is wide open running toward the corner, but the Falcons' blitz with Weatherspoon forces Wilson to re-direct, re-set, and scramble to his left. 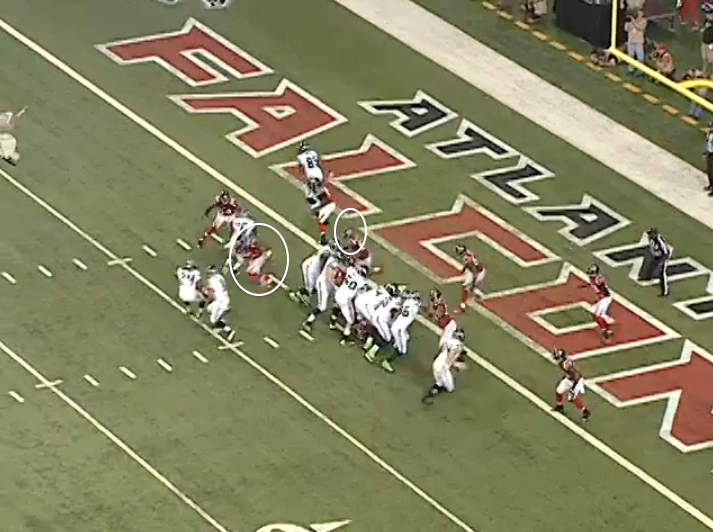 Take a second to appreciate Marshawn Lynch in pass protection.

Again, you can see McCoy running away free - but as Wilson re-sets his feet to avoid Weatherspoon, he's unable to throw the ball. Drifting left on one foot is not a great platform in which to set up for a throw. Not even for Wilson, who excels throwing on the run. 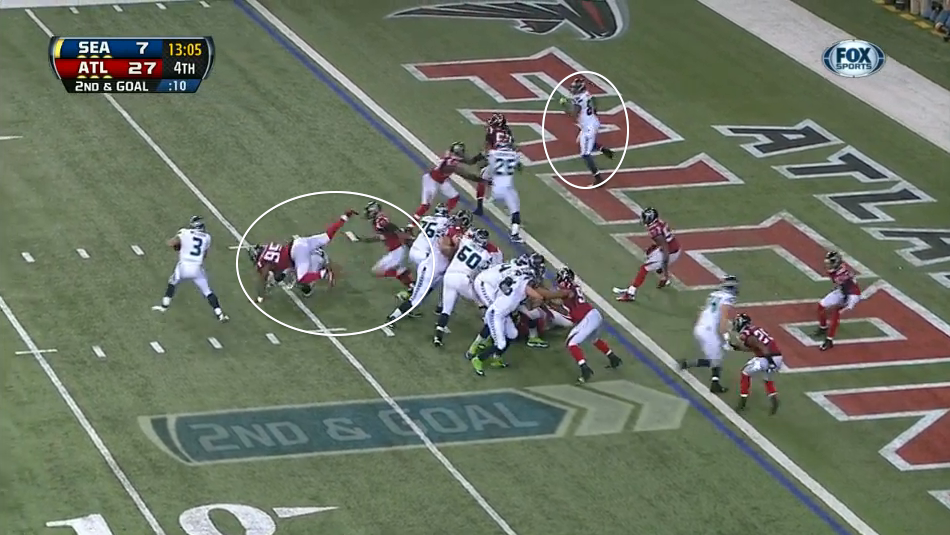 By the time Wilson gets to a point where his feet are set enough to throw to McCoy, #53 Mike Peterson has recovered and in trailing coverage.

Doesn't matter anyway, as Michael Robinson's and McCoy's routes have cleared an easy lane for Wilson to run the ball in.

The gif says 'blitz pickup', but in reality, as I re-watch the play, Lynch is just doing his job in pass pro. The blitz is actually 'picked up' by Russell Wilson as he's able to avoid the on-coming Weatherspoon.

On both plays above, Wilson uses his mobility judiciously to extend the play and score. Interestingly, McCoy was probably open enough on both snaps for Wilson to have thrown him the ball, but when you have 11 moving parts on defense, it's impossible to account for each and every contingency.

In the first case, the throwing lane to McCoy didn't open up quickly enough as Breno, Robinson and Lynch bunched up. In the second case above, a middle linebacker outside blitz threw off the timing. Each bump in the road happened in an instant but it just goes to show how important timing between QB and receiver really is. It also shows the importance of Wilson's ability to extend plays and improvise.

As Iron Mike once said, "Everyone has a plan until they get punched in the mouth."