Also there are a couple of numbers but you don't have permission to use those for game day experience enhancement. Augmentation maybe.

Share All sharing options for: Charts! Charts to enhance your game day experience

Numbers cannot tell you as much about football as scouting. A good x's and o's analysis will always be a better way to scout an opponent than stats. But with numbers you have a better idea of how good they are. Even the best scouts and analysts can be plain wrong sometimes and it can be impossible to tell that they are in advance. Numbers may be wrong, and it may be hard to tell if they are but it is never impossible. The stats that follow are a supplement for film - not a counterpoint or replacement.

I hope to do this before every game this season so let me know what works for you, what doesn't, and what you'd like to see.

The first step in any good pre-game analysis is to completely ignore the rest of the team and talk about the QBs. The next step is to talk about things you can't get wrong because there's no way to verify them. Time for the intangibles! Unfortunately this is the one area where Russell Wilson absolutely loses out to Cam Newton. I know this is the first game of the season and you want , hell, you deserve, good news but I can't give it to you.

Cam Newton brings the intangibles in a way Wilson just can't. When Newton puts a towel on his head it says that he's done with Carolina, done with football, and done with you. When Wilson puts a towel on his head it says "aw, look! Wilson's sweaty!" I like to think that Wilson spent a good portion of the off season working on his body language in front of the mirror but there is just no way he'll be ready to compete with someone who can change the entire emotional dynamic of his team by running his hands along his pecs at the wrong time.

That's the way it is. When Carolina drafted Newton they knew they were getting someone ready to emote at the NFL level. Wilson just isn't there yet. For one more year at least he's going to have to lean on his teammates for the emotional content necessary to football at the NFL level.

Things you can touch

None of Comp%, Y/A, Passer Rating, or QBX can tell you what a QB will do in a single game. They can set expectations but they offer no certainty. Want proof? Go look at Matt Flynn's career line. A single game is nothing (and, if we want to get deep, it's everything!).

Cam Newton did not take a step back last year. It was a good storyline and timing made it compelling. Do not be looking to see if he gets back to his rookie form. Instead, understand that Cam Newton was a stunningly mature QB (in the sense that his skill set was mature when he entered the league) his rookie season and after a second nearly identical season people shouldn't be asking him to prove anything. The burden of proof is now firmly on the people who are objectively wrong Newton haters Newton skeptics. 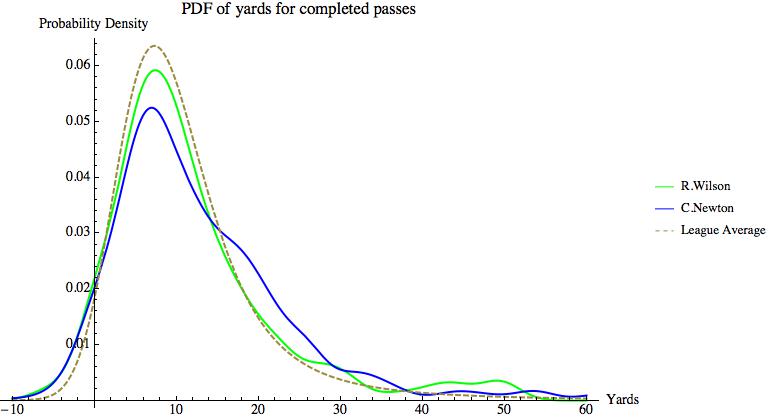 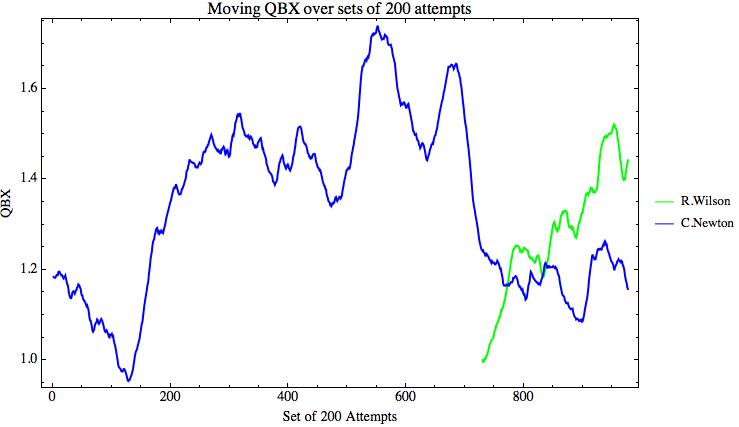 I can't speak to DeAngelo Williams in an intelligent way since he's spent his whole career with Carolina and except for a deep appreciation of the region's BBQ (your BBQ needs more vinegar - I know this) I mostly ignore the entire region. Sorry. Still the silver lining is that his name isn't Adrian Peterson or CJ Spiller so I am fairly certain the Seahawks have the edge in the RB matchup (note: RBs do not matchup against each other).

I also know that this is his age 30 season and there is good reason to suspect that he's about to experience a decline from his already mundane numbers. He has a low attempt number so, if that matters, maybe he's the rare RB who wont hit the wall but 2012 already saw a steep decline from his previously stable (and not bad) numbers so I'm dubious.

If the run D performs well this game it wont be enough to tell if they've really improved.

Marshawn Lynch is a sexy glorious beast who will someday have a game so good that he holds Wilson to zero attempts. That's the real matchup to preview before Seahawks games. 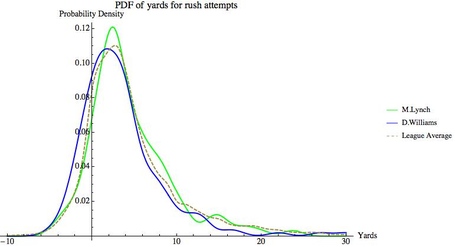 This is a weird thing to preview in the early parts of the season. Has Carolina's defense changed? Yes! Has Seattle's? Yes! Will they preform differently? Yes! Projections of the changes' effects is a job for people who scout better than me. And people who pay more attention to the Panthers than me. In the meantime I'll just say to take it with some salt and recognize that previous season performance is a decent indicator of current skill and the best quantitative indicator we have.

Question, is the Panthers D line going to be better? Because evidently in 2012 they were heinous at stopping the run. Just absolutely abysmal. Also they weren't very good at stopping the pass but Drew Brees is hard.

If they can't improve on a success rate that is CJ Spiller in college level silly, Wilson really might be held to zero attempts.

That was a exaggeration born out of excitement. Sorry. 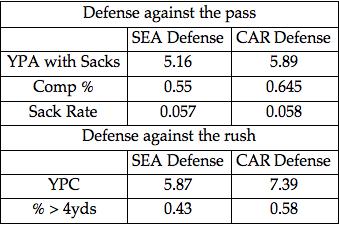 Yards per Pass Against Distribution: 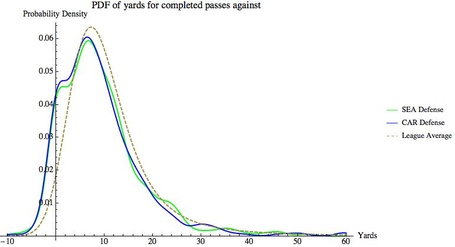 Yards per Rush Against Distribution: 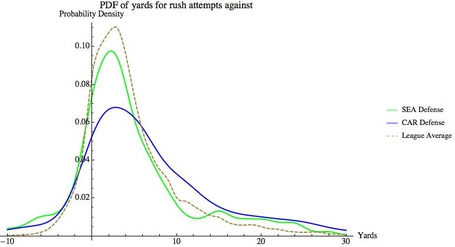 I struggled with whether or not to include a projection but in the end I decided, "whatever". This isn't really useful because my confidence ranges are huge. Football's complexity is ineffable. I think we should stop saying the word and spell it ftbll. Also, no religion. The score projection is based exclusively on the scores of the previous 16 (regular season) games for each team. The math is roughly score = 22+4*(Standard deviation of league's average scores*[Average team score/Average league score])+3*(Standard deviation of league's average scores against*[Average opponent score against/Average league score against]). I got the constant values through linear regression so they're not just from whole cloth. The numbers are actually longer and adjust depending on time period. My confidence in the numbers reflecting the real world is basically zero. But maybe it's fun?

The win percentage is based on the pre-season hurricane charts. Which, as I said at the time, are really conservative.