The Seahawks are going to Superbowl Ecks Ell Vee Eye Eye Eye. Before we look forward to the Broncos, let's look back at some of the explosive plays from the NFC Championship Game.

I’ve got some news for you all. Not sure if you all heard but the Seattle Seahawks are going to the Superbowl to play the Denver Broncos. Exciting, I know.

I’ve added a few tweaks though. I’ve included the Expected Points Added (EPA) and Win Probability Added (WPA) to highlight the leverage of each play. WPA is listed as change in the home team’s win probability (in this case, Seattle’s). By the way, all EPA and WPA numbers come from Pro Football Reference.

San Francisco is already out to an early 3-0 lead, thanks to Russell Wilson’s botched Chris Paul impersonation. However, they don’t change their game plan much; it’s run, run and run some more. Offensive Coordinator Greg Roman clearly wanted to establish a ground game via the long legs of Colin Kaepernick. Many of San Francisco’s designed runs in this game came from a few unusual looks, like the following.

The Niners line up in 12 personnel with a similar look to the play prior, in which Vance McDonald caught a pass for 13 yards coming out of the backfield. McDonald motions left and Seattle shifts to their right in anticipation. At the snap, Kaepernick makes a play action fake to Frank Gore, then bootlegs right with no thought to scan downfield to throw. McDonald slices across the formation and seals Sherman.

Anthony Davis helps out on a double-team on Tony McDaniel, then goes into the 2nd level to cut block Malcolm Smith. Vernon Davis heads up-field to block Kam Chancellor out of the play. Gore’s responsibility is probably Michael Bennett, who crashes down so hard he takes himself out of the play anyway.

Kaepernick simply follows his blockers until Wagner chases him down.

Cian Fahey broke down some of this play already here. Kearse, Baldwin and Lockette are aligned in a trips formation on the left hash mark. Golden Tate is isolated outside the numbers on the right. Baldwin appears to be Wilson’s first read, then Wilson progresses to Kearse, who runs an out route at the 20 yard line (a yard short of the 1st down). Since Lynch stumbles through his chip, he’s not a viable check-down option.

Wilson moves out of the pocket, eyes down field. He could either run for the first down or throw. He is nine yards away from the line to gain with NaVorro Bowman closing in. If he pump fakes and Bowman bites, Wilson gets the first down. However, Wilson elects to get 22 yards instead of 7, so he lobs a dangerously soft throw to Baldwin. Baldwin displays excellent control seeing the ball through Reid’s hands into his own.

12 personnel strong side right, Boldin and Crabtree split left. Interesting that Sherman is in the slot against Boldin here. Davis motions to the right outside the numbers, taking Kam Chancellor out of the box.

Crabtree and Boldin run a "rub" route, but the wily Sherman sniffs it out and doesn’t get trapped. Fahey also covers this in a few tweets here, here and here. Kaep looks to Boldin and Crabtree first. He sees they aren't open, tucks the football and goes. K.J. Wright is spying Kaepernick on this play, but takes a bad angle and misses the near two-yard-losing sack. Kaepernick has open space for 12 yards. 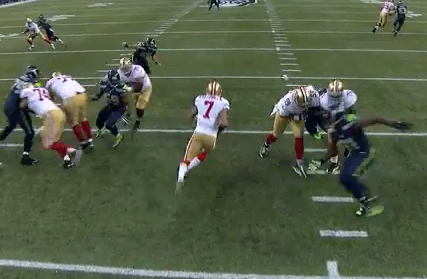 Now, onto the big run. Davis, McDonald and Boldin are initially lined up in a trips set inside the numbers. McDonald goes into motion, with KJ motioning off Red Bryant’s hip to cover him.

Tony McDaniel beats his man, collapsing the pocket from the interior but shortly becomes Kaepernick’s first whiff. Both Wagner and Smith drop into deep zones for coverage. With no spy, Kaep has plenty of open field to run and make moves. Smith, then Wagner quickly become whiffs two and three after coming at Kaepernick from bad positions. With his superior athleticism, Kaepernick turns Sherman into whiff number four. Amazingly, Kam Chancellor is cut blocked by Frank Gore at the San Francisco 45 yard line but gets up and makes the touchdown-saving tackle. Kam Chancellor is amazing.

I group these two plays together not just because they were back-to-back; they’re very similar. Because of the great coverage and interior pressure, Kaepernick is forced to create plays with his legs. Had K.J. Wright and Tony "McFarlane" taken slightly better angles, we’re talking about two sacks instead of two explosive plays.
No wonder it’s a game of inches.

Seattle lines up in 12 personnel. Baldwin is initially lined up just inside the right numbers, but motions left just behind Tate. At the snap, the entire pocket rolls right with Zach Miller, Breno Giacomini and J.R. Sweezy the primary blockers. Max Unger and James Carpenter stop blocking Glenn Dorsey, since the football should have been out of Wilson’s hands by now. As Dorsey closes in, Wilson begin his scramble drill, quickly sets his feet at the Seattle 25 yard line, then launches the prettiest 55 yard bomb I’ve seen to Doug Baldwin, who catches it at the 49er 20.

Oddly enough, Tate seems open at the Seattle 48, three yards beyond the line to gain, with no one in Wilson’s face. Wilson’s hesitation is slightly baffling but he turns the play into an even better one, thanks to Baldwin’s sly ability to sneak behind Whitner and Reid.

Play action is pretty important. Selling the run with a great false hand-off can suck in linebackers and create space to complete passes. If you really, really want to sell the run, pull a weakside guard. San Francisco does on this play but not for a play-action pass. They sell the run to Frank Gore to open up a bootleg run for Colin Kaepernick.

Bruce Irvin is unblocked at the line but the pulling guard and run-fake sucks him in to try to tackle Gore and Kaepernick takes off to the left. Crabtree makes a solid block on Maxwell and Kaep dashes for 22. Simple, yet elegant. Masterfully done.

This one comes two plays after the 22 yard dash and the play before was the Bennett strip-sack which bounced to Jonathan Goodwin. San Francisco comes out in 12 personnel again, with both tight ends are in-line on the left. Boldin and Crabtree are stacked and aligned inside the numbers. Seattle rushes four and McDonald gets Kaepernick to move out of the pocket. Irvin is spying Kaep all the way to prevent the run. Kaepernick, out of options, flicks/floats/fires a lofted bullet to Boldin.

Boldin runs a simple go route at the snap and his route takes him into Earl Thomas’ zone, who then follows Boldin. They both get a little physical but quickly disengage. Earl seems to be slightly leaning back as the ball comes in but has great position and even gets a hand on what was a perfectly placed pass.

I was absolutely in favor of going for it on 4th down, if at least to draw the 49ers offsides to set up a more favorable field goal attempt. Getting the 49ers and Aldon Smith in particular to jump offsides was not only possible but likely. I noticed that from looking at the film in the days leading up to Sunday’s game:

Not only did Russell do just that, he and the rest of the team knew a kill-shot was possible. The entire 49ers defensive line seemed tentative and frustrated after the hard count, giving Russell the time to float the dimest-of-dimes to Jermaine Kearse. Baldwin, Kearse and Tate line up all on the right and run three verts. Baldwin and Kearse both get a step on their men. Baldwin almost gets in the way but Kearse comes up with the catch, which even hits his bicep before he pulls the football in.

Many, many thanks to Danny for the GIFs!