Super Bowl XLVIII: Breaking down the "other play" that sent the Seahawks to the Super Bowl

Share All sharing options for: Super Bowl XLVIII: Breaking down the "other play" that sent the Seahawks to the Super Bowl

The biggest play of the NFC Championship Game, maybe the biggest play in Seahawks history, was the now infamous Richard Sherman/Malcolm Smith tip-drill interception to seal the win over San Francisco. Coming in a close second though was the second snap of the fourth quarter, a free-play touchdown strike on 4th down that put the Seahawks in the lead for good. That key play, one that was nearly a field goal attempt from 53, gave the keys to the Super Bowl back to the defense and put the Niners behind the 8-ball to score. The pressure shifted.

On the first play of the quarter - a 3rd and 22 as the result of an intentional grounding call on Russell Wilson - Seattle gained 15 yards with a short pass to Zach Miller on chip-and-release. At that point, the Hawks trailed 17-13 and faced a 4th and 7 from the 49er 35 yard line. The subsequent series of events were.... weird... even infuriating at the time, for me, actually. As friends and family around me chatted about trivialities, I sat there stewing, a rage growing inside me as Hauschka wandered around seemingly confused, then headed to the field to just stand there as the inevitable wasted timeout came.

After the game, it came out that Hauschka, before running out to stand there and let the playclock wind down, quickly expressed his concerns about the range, calling it a 'tricky kick."

"I didn't really want to kick it, to tell you the truth," Hauschka told Newsday after the game. "It was into the wind . . . I didn't think it was the right decision and I let coach Carroll know that."

"We had decided on a certain range," he said, "and depending on the conditions of the game we were going to stretch it past the 30-yard-line. At that moment, I didn't feel like it was the right time to stretch it."

Hauschka is also a three-handicap golfer that has noted the similarities in kicking to driving the ball down the fairway. "It's really similar to kicking for me. When you've got a shot into the wind, you've got to swing easy and just trust your distance. Just like kicking, you can't try to swing too hard." This is a guy whom Russell Wilson has previously described as a "perfectionist" that is "very, very technical in everything that he does," and isn't shy about his limitations nor does he delude himself about his own range. It's something that he calibrates carefully prior to the game, based on field position, wind, and rain.

"You have to be honest with yourself," he admitted. "It was the wind at that moment. Sometimes you can make that, but I felt the wind at that moment was into the face enough to not want to try that kick. I grabbed him on the sideline as I ran out because I could see the flags [on top of the uprights] and I told him: 'We shouldn't kick this.' "

"If it was the other way (kicking to the south end) I would have easily had that. But not that direction. It wasn't that I didn't think I could make it, I just didn't think it was the right decision."

So, it was a weird ass moment, but Hauschka spoke his mind and Carroll heeded his advice. On some level, you have to credit Carroll for trusting his player. "That's a little bit unusual," he conceded, but "I love the honesty. Most guys go and say I can make it and go out there and plunk it down at the goal line. I thought it was a great moment for us, and it was a great decision."

After calling timeout, the Seahawks' offensive brain trust converged to talk things over. From the outside looking in, when you're watching the game on TV, at first, a "free play" deep shot downfield for a touchdown seems pretty fluky. It's almost not satisfying.

However, when you realize that almost everything about that play was deliberate, right down to the hard count and option routes based on an off-sides penalty, it strikes you just how amazing of a play this actually was. Game-altering, giant, momentum-swinging-lead-adjusting play. GAGMSLAP. "Gaggimslap" is the new 'gap' play that Wilson always talks about.

Listen in as Russell Wilson, Pete Carroll and Darrell Bevell discuss getting San Francisco to jump (Via NFL SoundFX):

Wilson: "I think we should go for it, coach."

Carroll: "If our guys don't jump, I want to use hardcount, yeah."

Wilson: "They're going offsides on just the normal 'one.'"

As Wilson said after the game, "We practice that stuff all the time. It's something that you have to use, especially playing against a very, very good defense and a great defensive line. Just to make sure that the defense has slowed down a little bit so those ends aren't getting a good jump on the center. I think that's a huge thing."

The play call was Patch Zebra Detroit. It was trips right, and depending on whether or not the hardcount worked, the Hawks would have run a route combination with the aim of making a first down. Instead, when the yellow flags flew, each receiver optioned into a 9-route up the field.

Watching the replay, it's clear that the offsides by Aldon Smith creates a moment of hesitation for every member of the San Francisco defensive line. Wilson takes advantage and zips a perfectly placed ball 45-yards downfield into Kearse's breadbasket.

Wilson looks left at the snap, and Baldwin's route up the seam takes the attention of Donte Whitner. With Whitner indisposed, that leaves one-on-ones on the outside. This is all verts.

Baldwin actually almost runs himself into the action, thinking the pass might be intended for him. As Kearse joked about after the game, "I'm not going to throw Doug under the bus..... but Doug was not supposed to be there (laughs). That's my dog, Doug, that's my guy."

"We got them offsides, we had a free play, we were going to take a shot downfield because it was a win-win situation no matter what. Russ gave me an opportunity, and I was blessed enough to come down with the ball."

The key for Kearse to get position on Carlos Rogers is his release. Watch how Jermaine releases wide and gets outside the numbers quickly. This gets Rogers to open the gate outside, and right as his hips get turned, Kearse cuts it upfield. This is an excellent route by Kearse on what you'd actually think was just a simple straight ahead go route. It's the subtleties that made this play work.

Now that Rogers is on Kearse's outside hip, Kearse can feel his defender, fight him off, and go up to get the pass.

A huge play in a critical moment, and one that was deliberate and intentional. This was not a flukey broken play or a lucky break for a desperate Seahawks offense, this was planned, practiced, and performed to perfection. 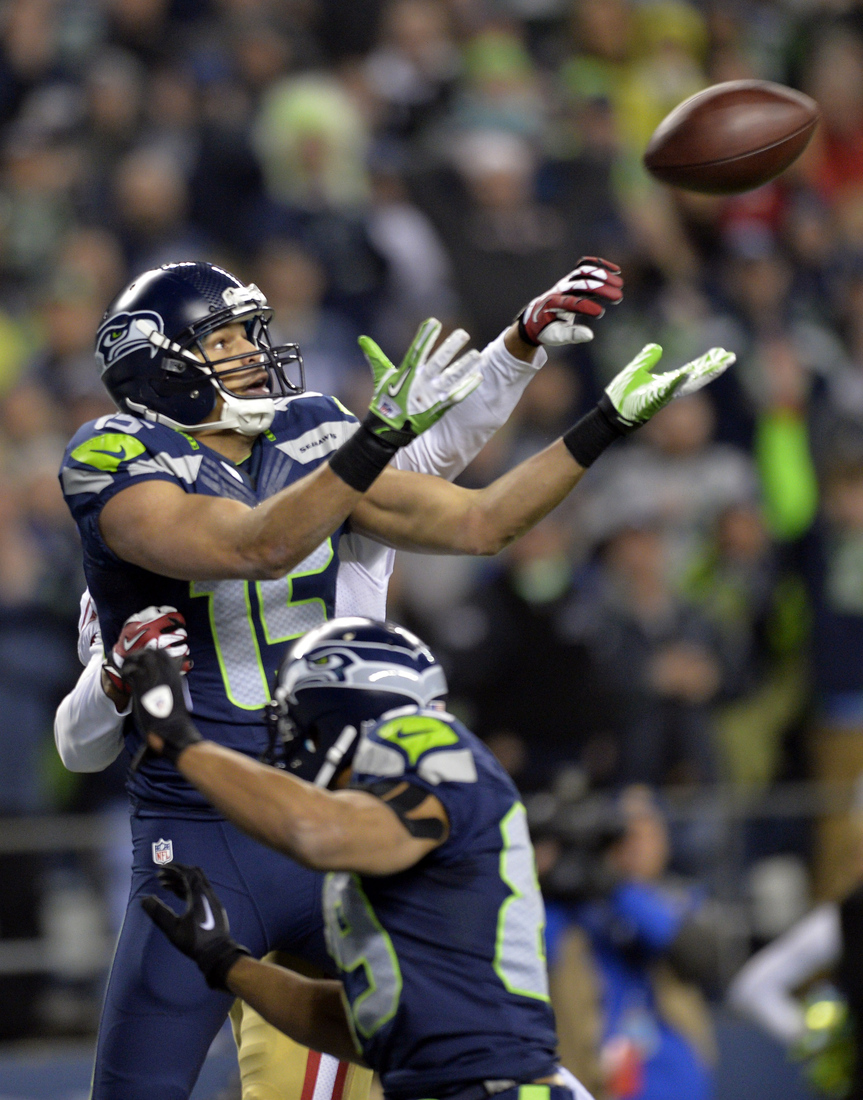 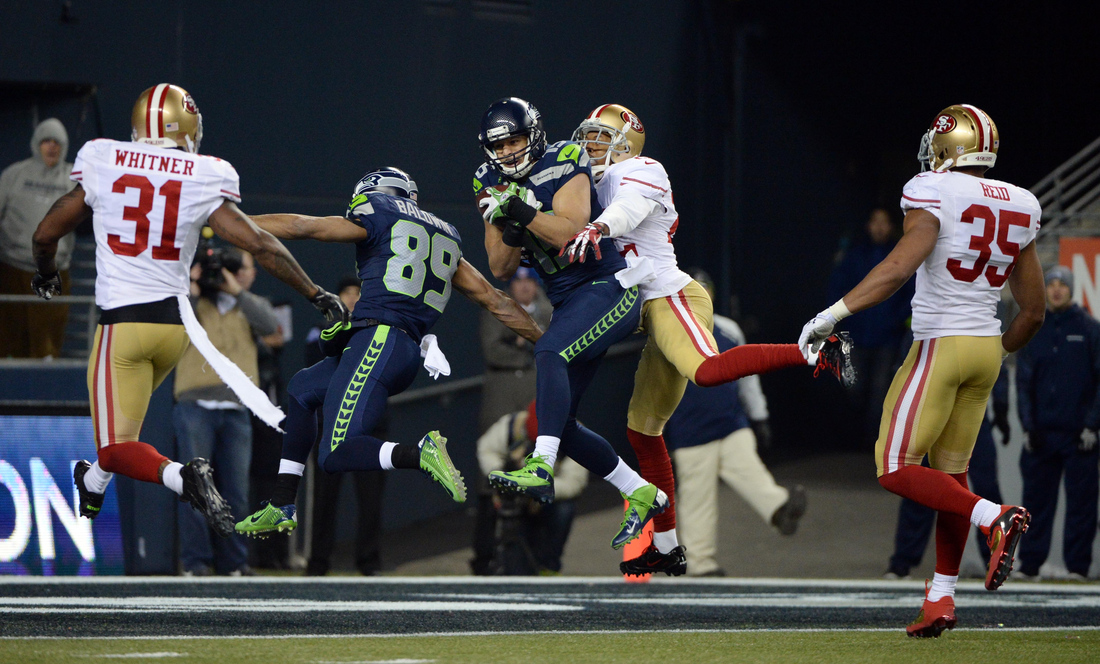