Congratulations on your purchase of a Russell Wilson from Harrison-Tammy Cooperation. We are certain that you will be pleased with the results and the performance of your RW-3 as one of the finest and most exciting players in the NFL market today.

We want to get you the best results from your new quarterback and to operate safely. This guide will contain all the information necessary to achieve that goal. Please read carefully.

We suggest you read the Distributor's Warranty to fully understand its coverage and your responsibilities as the owner. This Distributor's Warranty is a separate document that should be given to you by the dealer. Please return your Russell Wilson if you did not receive one, as it may be malfunction or glitch or you may have purchased a earlier model by accident. 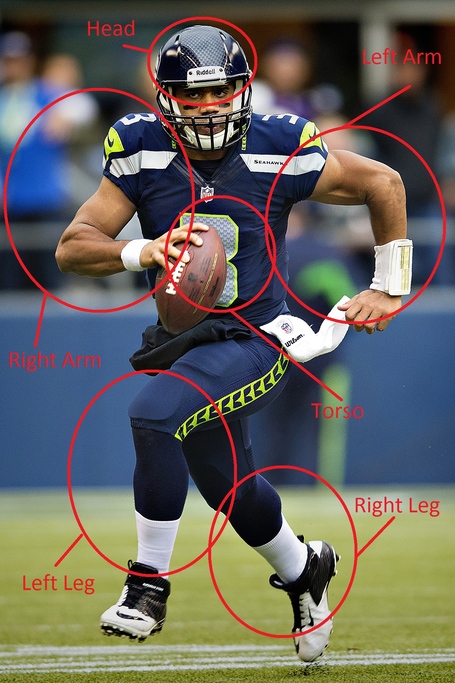 Russell Wilson is self-automated, meaning that as soon as the parts are assembled it will automatically know when to turn on and off. Russell Wilson also does not have a sleep mode and will not accept the "sleep" command. Upon all inquiries or requests of sleep RW will be designated to reply: "No Time To". Don't be worried if this is distressful - this response is automated and simply written into RW's hard wiring.

The head of Russell Wilson is the most delicate and important part regarding your quarterback. The head has been specifically designed to implement and run the latest QB software, Peyton 2. The software has already been pre-installed and will naturally evolve itself and apply its own updates. The head is also compatible with other QB software such as MeBrady and can run up to three different offensive schemes: West Coast, Spread, and the Option.

In addition to the standard 275 degree neck rotation, the head of Russell Wilson is equipped with two unique Harrison-Tammy features. The eyes are specifically designed for robotic precision in reading and assessing even the most complicated defenses. To provide additional support, we have reduced blinking to only once in every fifteen seconds. Likewise, the mouth has been crafted into becoming the most well-spoken NFL player in history. We have divided up speech patterns into three categories: consistent encouragement, media relations, and chalk talk. The volume control will also adjust in accordance with situations.

Being self-aware, Russell Wilson is loyal and conditioned to follow your specific team, despite past history or events. At times, Russell Wilson will like to speak out of this loyalty, and may end interviews with a small remark on cheering for his team.

Unfortunately, we are still working on creating more animation within Russell Wilson's face. Thus, the head has only been restricted to two different looks: smiling and stoic. We will provide an immediate patch for download as soon as we come up with more facial expressions.

The right arm of Russell Wilson has been calibrated perfectly to throw a tight spiral every time. Measuring at 31 inches, almost all passes RW throws will not be blocked. The arm strength has been measured to be 70+ yards. Accuracy and touch, while may require calibration at times, should be balanced and graded on a scale of "superb".

The left arm is designed specifically for the truck stick maneuver. If Russell Wilson was ever to run the ball, the left arm has the strength to push off a defensive player as heavy as 300 pounds. As you can see below: 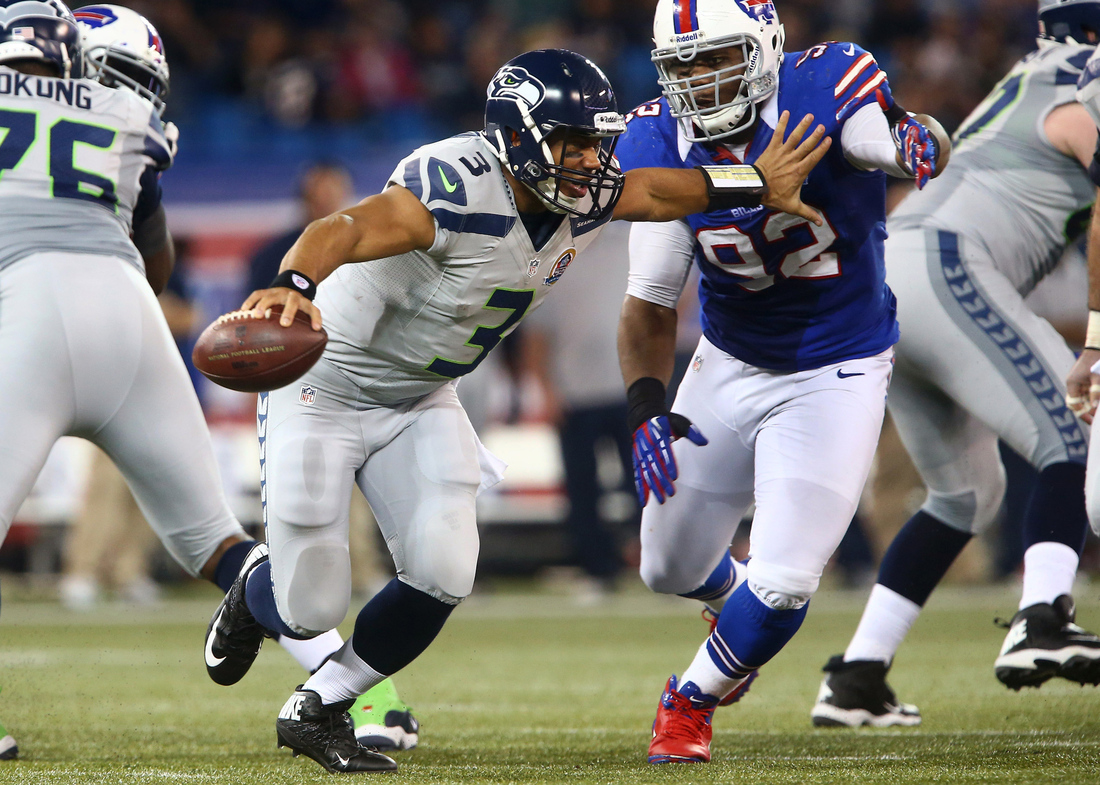 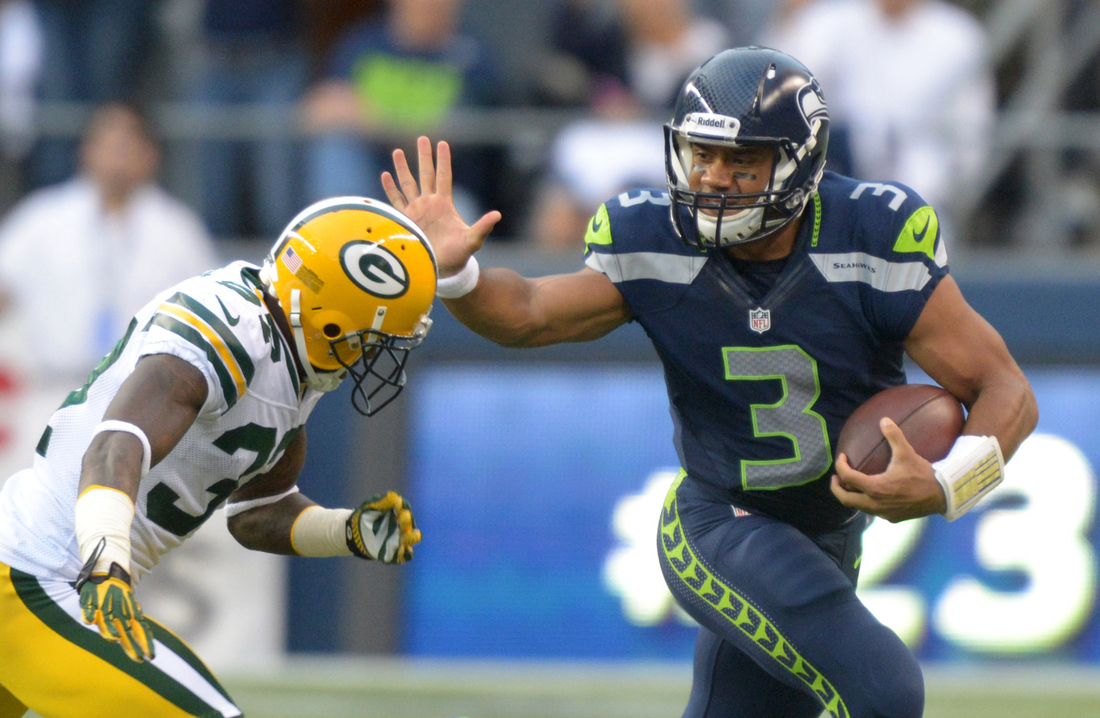 Russell Wilson has been upgraded with a titanium steel cage that will protect him from most sacks. Likewise, the torso provides 180 degree rotation support, making it very easy for your Russell Wilson to throw from different shoulders and run fakes.

The legs of Russell Wilson has been motorized to evade pressure and run. Maximum mobility has been installed. Leg length has been shortened to compensate for muscularity. While Russell Wilson may run of the pocket at times, it is again automated to understand not to overrun or burn out his legs, so it is not uncommon to see your Russell Wilson slide out on the field.

Figure 3a: A Russell Wilson prototype leaving behind a trail of destruction in its wake. (Captured by bigtrain21) 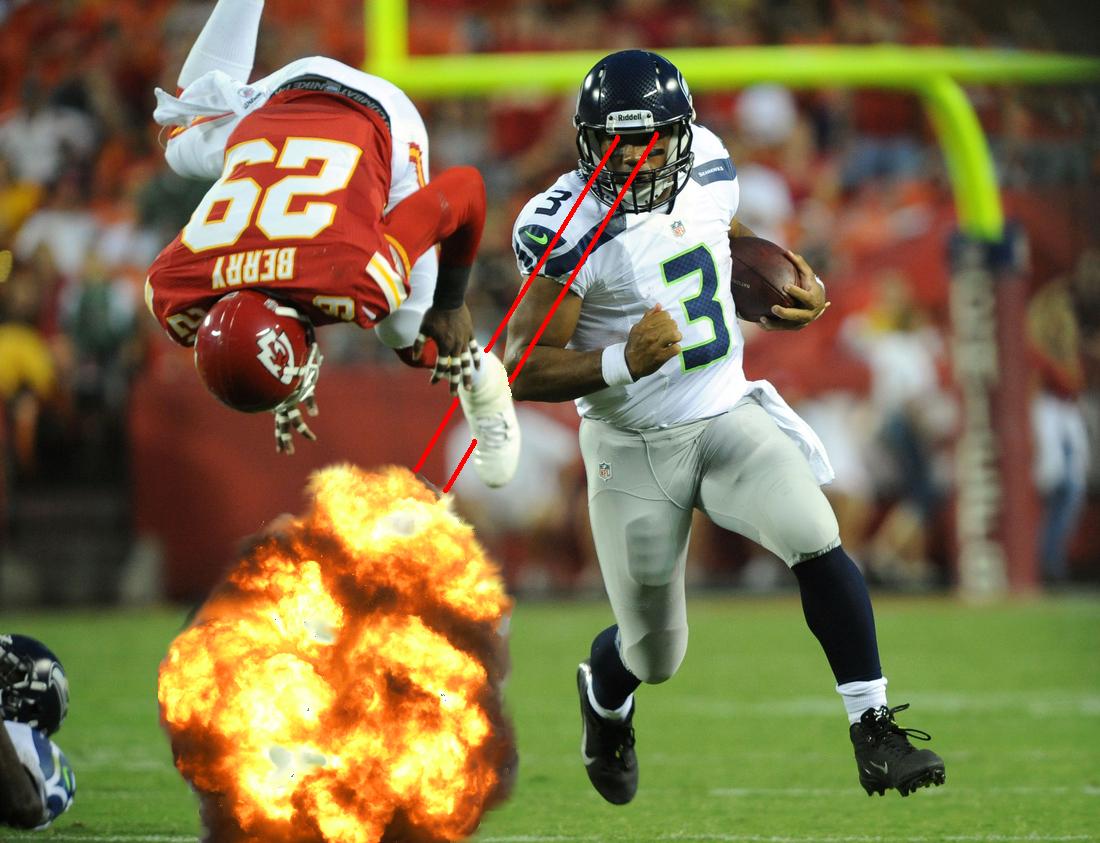 Maintenance and Care:
Russell Wilson is a high performance quarterback that does not need much maintenance. However, it's function and performance may deteriorate upon misuse, especially if it is not frequently calibrated. If you see anything wrong or feel concerned with your Russell Wilson, refer to this guide and contact Harrison-Tammy Support immediately.
2014 Super Bowl Version Update: Please be advised that Russell Wilson needs to be manually groomed in terms of facial and hair treatment: Russell Wilson may not be working up to standards if not properly washed everyday.
On-Field Support:
While not required, we recommend that you provide Russell Wilson with either all or some of the following: a Offensive Line, Wide Recievers, a Defense and a Running Back with a BeastMode feature. Not only will this reduce pressure on Russell Wilson to succeed, but it will also improve its performance significantly.*
*Accessories sold separately
You may also consider spending additional money on a Matt Flynn, a prototype of the Green Bay Packers quarterback factory, in the case you feel unsatisfied with the Russell Wilson performance. Starting anyone but Russell Wilson on quarterback will automatically increase his drive-to-win CPU, so expect a rise in his statistics and numbers.
Win-Forever Support:
Dr. Pete Carroll will be a hands-on expert and consultant regarding your Russell Wilson. Dr. Carroll, founder of the Win-Forever philosophy will be online or available on the phone 24/7 with customer service. Always listen to Dr. Carroll with regards to maintaining long-term sustainability for Russell Wilson.

We have previously recorded cases of Russell Wilson doing beyond his necessities and keep running on his performance. Keep in mind that this might be detrimental to the health of your Russell Wilson, and always ask Dr. Carroll with regards for emergency shut down or alternative methods to stop overheating and overuse. Personal locks for film rooms, laptops and training areas can be found on the Harrison-Tammy website.

Manufacturer's Notice: Despite popular belief, Russell Wilson is not affiliated with Microsoft Cooperation and does not run on Windows.

Q: My Russell Wilson has not made any progress in the first few weeks. Has something gone wrong?

A: Nope! A Russell Wilson usually does not reach its prime performance until 8 weeks of its activation. In the first few moments, Russell Wilson will be eager to re-energize and get familiar with its processes. Your patience will be well rewarded in the end.

Q: How should I treat my Russell Wilson in the off-season?

A: Offer visits to your local hospitals, practice playing catch outside and keep him focused by asking him to review last season's film as well as the tapes of opponents of next season. We suggest you do this three times per one off-season even though Russell Wilson does not get bored.

Q: Are there any special tools I require to fix Russell Wilson?

A: While Russell Wilson is self-automated, it does require some hands-on tools. An electric drill and a screwdriver is all you need with regards to loose screws.

Q: Is there a community that I can join as a Russell Wilson owner?

A: The official Russell Wilson twitter is run by a diverse and large community. Most posts on there are some of the quotes actually said by their own Russell Wilsons. Registration is free, of course.

Q: Is it possible to get a refund?

A: Harrison-Tammy policy dictates that all sales of Russell Wilsons are final. We also have extreme confidence in that you won't be needing to ask for your money back.

Note: this article was originally published almost a year ago exactly, but considering our sponsorship by RoboCop, it was too perfect.