For the primer to the individual offense and defense salary cap posts, see here.

Brian Hartline earned north of $6M on a per year basis and Victor Cruz earned more than $8M on a per year basis when they signed their contracts in 2013. I believe Golden Tate will fall in the middle of those two contracts - perhaps $7M per year. Year 1 cap hits are low because teams pro-rate the signing bonus over the life of the contract (oftentimes 5 years) and pay them a low base salary in Year 1 of the deal. Hartline's Year 1 cap hit was only $2.115M and Cruz's Year 1 cap with was only $2.530. I think it is okay to estimate $2.3M for Tate in 2014, should he re-sign with Seattle.

Doug Baldwin, who is a restricted free agent, can't get an original round tender because he was not drafted. I think that will force Seattle to place a 2nd Round Tender on Doug. After studying the 2012 and 2013 2nd Round RFA Tenders, I estimate the 2014 amount to be $2,113,000.

I think paying Tarvaris Jackson the league minimum for an 8-to-9 year vet is worth the money. I have estimated $950k to keep T-Jack in Seattle in 2014. I think $700k to keep Lemuel Jeanpierre as a backup center is also a fair estimate and probably a smart move. If Seattle should move on from these two players for younger players - they may be able to save some money, perhaps not in a huge way, but $500-700k is still savings should Seattle choose to go that way.

I think the second priority on offense is adding depth and talent to the offensive line. You may be able to swap down in Round 2 and get a quality OL in early Round 3 (perhaps Larry Warford area). Seattle may want to double back and hit OL again at the bottom of Round 5. If you add $15k to the contracts of Larry Warford (Early Round 3 in 2013) and Jordan Mills (Late Round 5 in 2013) the 3rd Round pick would hit the cap at around $580k, and the 5th round pick around $460k. Even if Seattle hits on an "Alvin Bailey" after the draft is over, the cap hit is pretty similar to that of a late round pick - so if that type of player beats out a late round draft pick, doesn't change much to your team from a cap perspective.

I think Seattle may go with the "big name" TE in the 2015 Draft, and may be happy for hunting for another "Luke Willson" or perhaps "Anthony McCoy" late in the 5th Round in 2014. A Luke Willson type contract adjusted for inflation would be about $465k in 2014.

Seattle simply can't afford to pay Percy Harvin, pay Golden Tate and pay  Doug Baldwin and keep Sidney Rice on his existing contract. Even after cutting Rice (who is due $9.7M in cap in 2014) you must take a $2.4M dead money charge. When you add that to the other proposed 25 players, you get a total cap hit for the Seattle offense at around $64M. This leaves only $53M for the best Defense in the NFL- we will talk about them in the next segment. 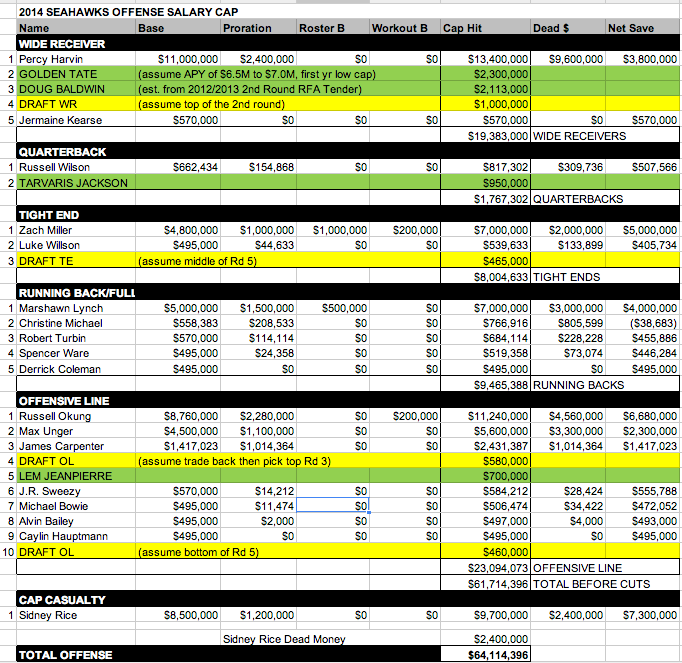