This thing will make "Ram rules" and that silly letter from the 49ers brass look like child's play... I hope.

Seahawks fans are the absolute best in the entire NFL. I don't think it's really that close. The ferver with which fans stand and yell at games is impressive, and envied by other fanbases around the league. That doesn't mean there isn't always room to improve though... I think we could all benefit from a modest attempt to put on our best Russell Wilson and ask ourselves, "What can I do today to be better?"

Whatever that means to you, works for me. I'd like to pretend I care about your body, and that I mean to keep you in tip top condition, but I don't. I'm just concerned about your voice. Keep your whistle wet. Water, beer, whatever you've got in that plastic flask... I don't care really (as long as you're being responsible, if you know what I mean) as long as you keep the voice box in working condition.

For those of you not made of money, grab your water bottles immediately outside the stadium. Most every booth sells them for $1, which is an 80% discount on those same bottles being sold inside the stadium. I always buy three, plenty of water to go around that way, and still for less than a single bottle inside the Clink.

EDIT: Thanks to Dick5 for this tip. Bring a pack of Halls cough drops. This is something I do whenever I can. It helps a decent bit. I'll go through a whole pack in a game though, which according to the warning on the label is terrible for you.

Fuel Up BEFORE the game

Fatal error I see made by fans around me at every game I've ever attended... trying to hold -and eat- food while watching football. There is no table in front of you. You can't simply "set your nachos down" while in the stands... Big plays are going to happen in our Hawks' favor, lord knows I hope so. Don't lose your food while jumping up and down with the cute chick all dressed up in a Russ Wilson jersey next to you.

Show up early enough to walk around outside for a bit, grab a hot dog. Both your wallet and the woman in front of you who's head you will NOT spill nacho cheese sauce onto will thank you.

Yell towards the opposing players

B: Seem so simple that there can't possibly be anyone not already doing it. But.. 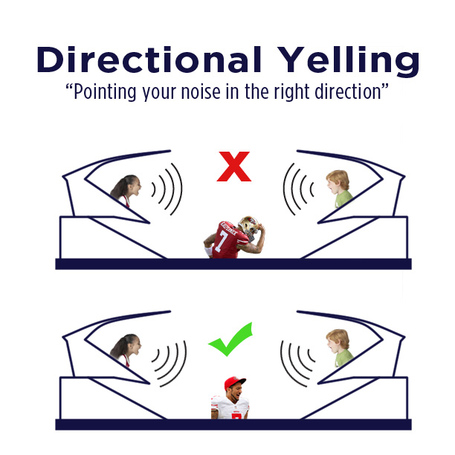 Yelling, whistling, hooting and hollering all make their largest disturbance when directed at the other guys. Not straight out into the air, or towards the space needle or whatever. Easy peasy.

When to scream, yell and cause a ruckus

I'll break down the chain of action that occurs every time the offense real quick for you here.

Previous play ends. Coordinator decides what the call is, then radios it into the quarterback. The QB then huddles everyone up and gives the play call to the other offensive players. The players line up, the quarterback and offensive lineman make any pre-snap adjustments they need to and snap the ball.

So I made a handy chart showing the moments during which crowd noise is most capable of causing a disturbance for the offense. Feel free to pass this around, I think it's pretty good information. 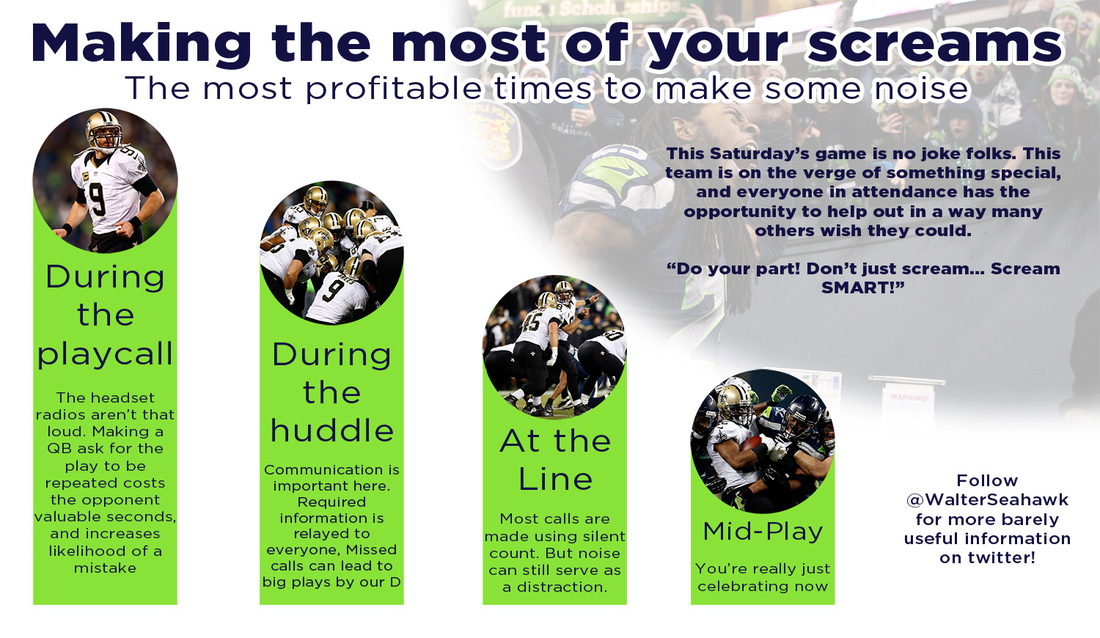 Parking is expensive around the Clink these days. Free parking within a reasonable distance from the stadium disappears earlier than most of you will be showing up, and fees can be as much as thirty to forty dollars to park near the stadium.

Check out the Seahawks transportation guide. It breaks down some great ways to get to the stadium. If you are anywhere near one of the Sounder stops, that's the best way to get to and from the game if you ask me. It's under ten bucks, drops you off at the King street station just outside the stadium, and doesn't leave until a half hour after the game. No worrying about leaving early to beat traffic!

If you know your way around the transit system, busses are a great way to go as well. And worst case, carpool. Get to use the diamond lane, and you can probably con those freeloaders into paying part (or all if you're a shrewd negotiator) of your parking tab.

Saturday's game is the biggest we've had here in Centurylink in some time, and one of the bigger ones ever. Ticket prices were through the roof early in the week, three to four times face value in many cases, but have dropped in the past couple of days due to some over saturation. Too many ticket holders seeing green, instead of green and blue I suppose.

I'm not here to chastise people looking to make a buck though, that's not my business. Quite frankly I'm happy it's drove prices down a bit, as many hardcore fans can't afford five to six hundred dollars to get into a game. If you're reading this, and are on the fence about whether or not you should splurge and drop some coin on tickets... trust me it's worth it if you're able. Seahawks games are an absolute blast.

I've been lucky enough to attend some great games in the two years since I manned up and got a pair of season tickets. Sidney Rice's late touchdown to beat the Patriots in the "U Mad Bowl", two absolute beat down's of the Niners, a big win over the Saints. I know exactly how loud both 136.6 and 137.6 decibels are too.

It's fun, that's what I'm saying. Five person stranger hugs, chants. I'm not ashamed to say my eyes well up with tears as the 12th man flag is raised... I simply can't help it. The moment is moving.

Is this working? Are you loading up the ticket exchange yet? If so, I look forward to seeing hearing you on Saturday!