It's 12:11 AM. I've discovered just how much of a timesink it is to create marble races in the physics sandbox program Algodoo. And the Seattle Seahawks are (still) 2-1.

Week 5 of The Watch is upon us.

Thanks to all of the teams that were on a bye week last week, the situation didn't change a whole lot for the Seahawks, other than the fact that they're not clinging to the #6 seed. The NFC seems to be a highly competitive conference this year, as only two and a half games separate the best record (3-0 Arizona, who were on a bye as well) and the worst (three teams knotted at 1-3). With a glut of teams sitting at .500 (and many of them playing each other this week), it may be a while before we see the real standout teams of the conference emerge.

This is how the NFC looks after four weeks of play: 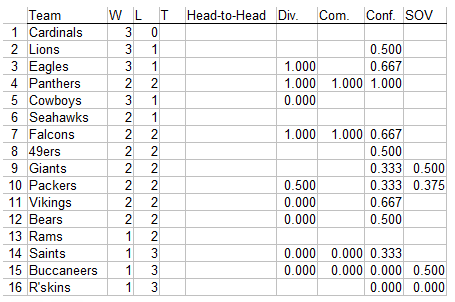 The conference continues to have a lot of teams with matching records, and here's how everything sorts out in terms of tiebreakers and seeding:

1. We start with the NFC East, where both Philadelphia and Dallas have a 3-1 record. Unfortunately for the Cowboys, they haven't played a divisional opponent yet, while the Eagles have played and beaten Washington. Thus, the Eagles retain the division lead. They slide down to the #3 seed, however, on account of their 1-1 conference record, versus the Lions who are at 2-1.

2. Atlanta and Carolina are tied for the NFC South lead at 2-2, and both teams are perfect in the divisional record as well as against common opponents (both teams have beaten the Buccaneers). Conference record is where the Panters win out, as both of their losses came against AFC opponents. Meanwhile, the Falcons are 2-1, their loss to the Vikings last week being the deciding factor.

3. From there, it's a whole mess of teams with a 2-2 record, including three teams from the NFC North. Green Bay gets the advantage here, as they have a conference win while Chicago and Minnesota have yet to earn one. With one representative from each division now, conference record is the first meaningful tiebreaker, which Atlanta wins with the same 2-1 record that froze them out of their division lead. Second in line is San Francisco at 1-1. The Giants and Packers tie for the bottom of the group at 1-2, but New York's two wins (against 1-3 Washington and 3-1 Houston) gives them the better Strength of Victory over the Packers (with wins over 1-3 Jets and 2-2 Chicago).

4. The Vikings and Bears re-enter the discussion, and with no divisional or common opponents to speak of, Minnesota's 2-1 conference record gives them superiority over the Bears at 1-1. In a single week, the Bears went from leading the division to being in last place solely by virtue of tiebreakers.

5. Skipping over the idle Rams, three teams are left in contention for the conference cellar after the Buccaneers' surprising win over the Steelers. The Saints have a conference win, making them the top team out of the three, and the Bucs' win over a .500 team is enough to drag them out of the doghouse while Washington's victory over the winless Jaguars puts them at the bottom.

The win by the Buccaneers takes them out of the running for the #1 pick, at least for the time being. Meanwhile, the Jags and Raiders got thumped by a combined score of 71-28. The Raiders' head coach got canned shortly after the game (now there's an awkward flight home from London) and as much as we love Gus in this neck of the woods, he might not be long for his coaching gig either. Here's the rundown on the current draft order: 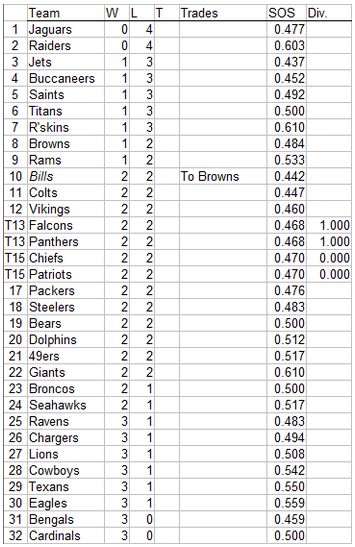 (Strength of schedule is found by totalling the win-loss records of all 13 opponents on a team's schedule. Divisional opponents are given double weight. Divisional record breaks any ties, followed by a coin flip.)

The Raiders have the disadvantage of playing in what looks to be one of the stronger divisions in the league this year, the AFC West. Both the Chargers and Broncos look to be playing in January, and the Chiefs are still showing signs of life. That translates into a very strong schedule, which will likely keep them ranked below the Jaguars (whose competition in the AFC South looks comparatively pedestrian) unless Jacksonville does the unthinkable and wins a game. (Hey, look at what Tampa Bay did after getting shellacked 56-14 by Atlanta two weeks ago. These things happen.) With the AFC East being a pretty weak division this year, don't count out the last-place team there (currently the Jets) threatening to take the top pick if the winless teams get on the board, either.

This week's rooting interests follow a similar vein as last week: even though the Seahawks are playing, it's not until Monday night, so all of the other contests will have already been decided by then. To that end, here's what we hope to see in the meaningful matchups for Week 5:

Thursday night: Minnesota (2-2) at Green Bay (2-2)
There's a really good chance that the NFC North turns out to be just as much of a slog as it was last year. One team's at 3-1, the rest are 2-2, and none of them seem to be capable of getting out of each other's way, if the game between the Packers and Lions were any indication. I'm still not afraid of the Packers, but I'm even less scared of their competition right now. Go Vikings.

Sunday morning: Bears (2-2) at Panthers (2-2)
I don't know if the last two games from the Panthers were an aberration, or if I'm justified in dumping their defense from my fantasy team. All I know is that the Bears have a pretty legit passing game this year, and I actually wouldn't mind running into them in the postseason and seeing the LOB give Alshon Jeffery and Brandon Marshall nightmares. Go Bears.

Sunday morning: Rams (1-2) at Eagles (3-1)
Thank God the Rams have only one win, otherwise this decision would've been a hell of a lot more complicated. It's always tough to pull for a division rival over someone from the outside, but the Eagles are half a game ahead of us right now, and as feisty as the Rams may be I still have them finishing last in the division. It might just be with a 7-9 record. Go Rams.

Sunday morning: Falcons (2-2) at Giants (2-2)
The Falcons at 2-2 still seem a heck of a lot stronger than the Giants at 2-2 - which is what makes this pick seem rather counterintuitive. I feel like this is shaping up to be another perfect season for the Giants to loom innocuously on the margins of the playoff seedings, sneak in after upsetting the Eagles in Week 17, and then hoist the Lombardi trophy five weeks later while the rest of the league wonders what the hell just happened... again. Better just snuff that notion before it gets much momentum. Go Falcons.

Sunday morning: Buccaneers (1-3) at Saints (1-3)
Shovel a little more dirt on Who Dey Nation and then we can start looking at them to play spoiler for us. Go Bucs.

Sunday morning: Texans (3-1) at Cowboys (3-1)
Both teams have been getting fat on inferior competition in the first quarter of the season. This game will determine who will get the inevitable "Is _____ for real?" article on the various sports media sites. Still, this is an easy pick considering that it's AFC vs. NFC. Go Texans.

Sunday morning: Bills (2-2) at Lions (3-1)
Another cross-conference affair, plus you know how I feel about the Lions' defensive line. (You want to play for the Jets, Suh? Go right ahead.) Go Bills.

Sunday afternoon: Cardinals (3-0) at Broncos (2-1)
Time to pick up that game in the standings we lost back in week 2. Go Broncos.

Sunday afternoon: Chiefs (2-2) at 49ers (2-2)
If the Kansas City defense could do the exact same thing to Captain Facepunch as they did to Touchdown Tom, I think I'll be in heaven. Go Chiefs.

That's all we have this week for The Watch. Even this early in the season, we've got some high-leverage games, particularly in the afternoon. Best case scenario, the Seahawks will be playing on Monday night to potentially take the division lead from Arizona. (Common opponent tiebreaker would give Seattle the tiebreaker.) Worst case, they'll need to win on Monday to keep pace with the Cards and not lose position to the Niners. The Seahawks won't see a division opponent for another two weeks, so it's important to enter divisional play with as strong a record as possible so that we aren't the ones chasing the other teams down.