Reloaded: Breaking down the bunch formation

Share All sharing options for: Reloaded: Breaking down the bunch formation

DK Note: From the archives -- I wrote and published this article on the bunch formation back on November 15th. If you missed it the first time around, hopefully you'll find it informative. If you already read it, just read it again.

The schematic concept of using what's commonly called a wide receiver bunch or a bunch formation is nothing new in the football world. However, while it's extremely common at the NCAA level, it has seen an increase in popularity in the NFL as offensive coordinators expand playbooks and philosophies to include some of the strategies employed in college.

There are countless variations based on personnel, formation, splits and objective, but the general idea is to group three or more receiving options -- any combination of receivers, tight ends and running backs -- together on one side of the field. Below, a visual example of a bunch set with a wide split (meaning, the receivers are grouped at the numbers, further away from the offensive line): 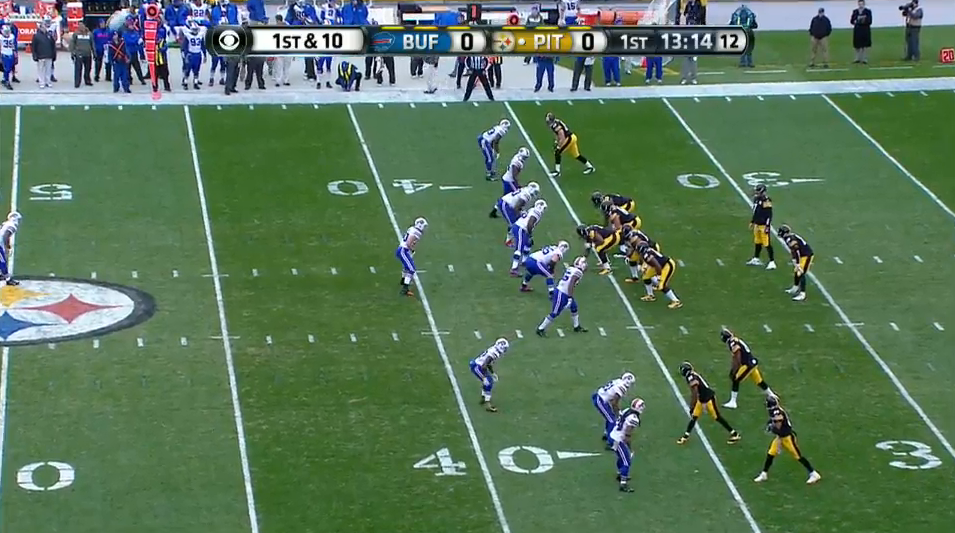 The reasons NFL teams are beginning to incorporate bunch style sets are numerous, but the basic idea(s) behind the scheme is to flood an area with receiving options, creating confusion for the defense and helping the quick passing game by facilitating separation and easy reads for the quarterback. The crisscrossed route concepts you can run from bunch -- which create natural picks for the offensive players as receivers and defensive backs run into each other -- make it very difficult for opposing defenses to play man-to-man coverage. So, in essence, you can dictate to the defense what they must do. In this case, play off man or zone defense (or, you can take advantage of them if they refuse).

Against man coverage, bunch creates picks or rubs that allow receivers to get open, and against zone coverage, it can create a numbers advantage by putting three receiving options in a zone that's defended by two opponents. Simply put, it's confusing to defend.

Bunch routes also give the offensive coordinator and quarterback the ability to create mismatches for their best players based on where they're aligned in the bunch and how the players move at the snap. Further, bunch sets tend to compress the formation, which effects spacing on defense and means you're creating space laterally, or expanding the field. If the bunch starts with a very tight split in close to the formation, the defenders are forced to come in as well, meaning receivers have more room on toward the sideline to move and establish leverage.

Bunch formations allow for quick passing attacks, which helps beat the blitz by getting the ball out quickly. Bunch formations also force opposing defenses to tilt coverage to the overloaded side, meaning you're getting more one-on-one on the backside and fewer defenders that direction to defend the run.

Oh, and that reminds me: bunch formations are good for running the ball too, because of the clumping of defenders on one side gives you more room on the backside, or because you can concentrate a pitch in the direction of the bunch and have a group of lead blockers at your disposal.

Teams are starting to use them more. I'm a little surprised they're actually not more prevalent at this point, but regardless, let's take a look at some Week 10 tape to break down what I've outlined above.

You might've heard about Tavon Austin's big day in Indianapolis this week. The rookie ended with a rather unique stat line of two receptions for a clean 138 yards and two touchdowns -- an average of 69.0 yards per catch (he also added a 98-yard punt return touchdown but that's neither here nor there.). So, how did Austin get 81 of those yards and a score?

The Rams used bunch formation concepts to get him the ball in space, and exploited what they saw as a vulnerability in Indy's defense: the dogged insistence on playing man coverage vs. that formation (or their inability to switch on the fly -- or 'banjo' coverage).

In the first quarter, the Rams test the waters with a bunch formation to the right. In this play call, Tavon Austin starts out aligned far outside to the right and the Colts respond with what looks like press-man coverage. Austin motions in, is mirrored by his defender, and Chris Givens, aligned in the middle, runs a shallow dragging route. The Colts don't roll their coverage to zone, nor do they banjo coverage and 'switch' like you'd see on a basketball pick and roll.

Instead, Givens is trailed by his man defender, who ends up running right into a teammate as Givens and Brian Quick cross routes. The play goes for 19 yards on 3rd and 3. Decent.

Have you ever seen the shots of coordinator and quarterback flipping through a binder full of printouts? Throughout the course of a game, the coaching staff adds to this binder so the OC and QB can see how the defense is playing certain looks and defending certain route combinations.

With this first quarter play above in mind, Brian Schottenheimer dials up a similar look, except this time Tavon Austin will be coming from the far outside, underneath the bunch, which will pick his man-defender nicely. See below:

See it from another angle — the bunch route vs. man coverage works too well. This is too easy. This is why you don't see many teams defend bunch looks with man coverage.

This illustrates an underlying theme for the use of bunch formations: getting your 'space players' in space. I'm assuming that the Rams didn't trade up to #8 overall to Draft Tavon Austin to be a regular wide receiver, but to give their offense a dynamic weapon in space, capable of hitting the home run from anywhere on the field at any given time. That really showed up in Week 10, as he did it three times.

The 'bubble screen', 'tunnel screen' or 'smoke route' out of bunch

Bunch formations work tremendously well in facilitating bubble screens and smoke routes, because it builds in lead blockers at the point of attack.

As we can see below from the Denver-San Diego game, when executed properly, you can get a lead-blocking hat on every downfield defender; hell, the Broncos manage to get four offensive linemen blocking two safeties here (!!) and six total blockers on four defenders. This Chargers' blitz was tragically ill-timed. Did I mention bunch routes are effective blitz killers?

A terminology note: here's how I differentiate between the different types of screen plays (very generally) -- a bubble screen sees the receiver bouncing back off the line of scrimmage and away from the formation toward the sideline as he catches the ball to move up field.

A tunnel screen sees the opposite, the receiver backs up and/or runs toward the formation, catching the ball in stride then moving up field. In both cases, there is designed blocking up front, creating the imagery of a 'bubble' for the receiver to run behind, or a 'tunnel' for which they can run through, respectively.

A smoke route is more or less the same as a quick swing pass, used either while called in the huddle or audibled to, based on defensive alignments. For instance, if a cornerback is playing off coverage, a quarterback can swing it over to him quickly, making that cornerback then make an open field tackle. The good space players make this very difficult.

We've seen above how teams take advantage of man coverage with bunch looks but the bunch concept also works really well against zone defenses. See below, as the Saints run a bunch look to the right, flooding the short underneath zone with three receivers. Because the Cowboys are playing a three-deep shell here, with the corner bailing deep, that leaves two defenders to matchup with three receivers.

Use the overload to the bunch side to your advantage

As the offense bunches receivers to one side of the field, the defense naturally keys onto that area, thinking the play is headed in that direction. This means that bunch formations create opportunities on the 'backside' of the field as well.

Watch how many defenders key on the bunch side of the field, leaving the little dumpoff screen with a lot of room to operate on the backside.

Bills defenders are keyed in on the bunch formation to the left, leaving one-on-one on the outside to the right.

This time, a draw play with Tony Romo faking a quick swing pass right, then executing an inside handoff to DeMarco Murray in the shotgun. This play attacks the short side of the field, but a few key blocks and Murray is home free. Big part of the reason for this is that the Saints were heavily tilted to the bunch side of the formation (this is a very loose bunch look that may actually be just a 'trips' look, but they have similar effect).

One final example, coming from Seattle's win over the Falcons. On this play, Golden Tate starts as the outside guy in the bunch look, but motions outside prior to the snap. The Falcon defenders widen out a little bit, but when Tate gets the ball, a hesitant William Moore stutters before attacking the wrong gap and getting himself behind the play. The result is a 48-yard pickup on a relatively simple little smoke route pass.

The offensive keys to this play are the two blocks up front by TEs Luke Willson and Zach Miller. Many teams like to run bunch looks with tight ends because naturally they can be a little better blockers in space. That shows up here.

The kind of players that benefit the most from bunch routes

Simply put, the players you want to get involved with bunch route concepts are 'space players' -- Jamaal Charles types, Golden Tates, DeSean Jackson, Darren Sproles, and obviously, Tavon Austin. Players with elite short area quickness also benefit from these types of routes because it allows them to get better separation and run after the catch.

As I illustrated, it's not easy. That said, with excellent, physical corners, safeties, nickelbacks, and linebackers, all sound tacklers, a defense can successfully stymie bunch concepts. It's about understanding of route concepts, discipline in your zone, good communication, changing coverages on the fly, and the basic tenets of the bunch can be stifiled.

Anticipation of the swing pass can foil screens out of bunch routes, and successfully defeating blocks at the point of attack is obviously another way to frustrate these schemes. Whether defenders are working in zone or man, they have to be alert for picks and keep their heads on a swivel for players coming into their zone. Some teams use matchup-zone style looks, sticking with the receiver that eventually comes their way, and some teams will jam hard on the front receiver or two, hoping to befuddle the pick routes and screw up timing.

Keep an eye on bunch routes this week -- how offenses are deploying them, and how defenses respond. I won't be the first to say that this is a trend that may continue to grow in the NFL.