Share All sharing options for: Reloaded: Thowing from a clean pocket & winning one-on-one

DK Note: From the archives -- I wrote and published this article about the Seahawks' pass game back on December 28th, shortly after the Seahawks lost to the Cardinals Week 16, for the first home loss in a long, long time. Whether you missed it the first time around or just need a refresher, hopefully you enjoy it.

I haven't even re-watched the defensive side of the ball from this game yet. Which is kind of weird because it would undoubtedly be the fun part. I'm three viewings through the offense in All-22, though, and it's still striking to me just how many opportunities were missed by Seattle's offense. Two, maybe three plays going the other direction - i.e., not being totally bungled, and we are talking about a completely different game, likely. I realize you can probably say this about any game, but the plays in question are the type that the Seahawks make with regularity.

Hindsight is always 20-20 when it comes to play-calling and I would have liked for Darrell Bevell to throw a few more constraint plays in to keep Arizona off-balance - screens, bubbles, end arounds maybe - but overall, it's kind of tough for me to really criticize play-calling as the culprit when execution was so, so poor.

It's even tougher to criticize when you realize, due to seven three-and-outs, Seattle ran only 50 plays, which is significantly lower than the already very low average of 60 plays that the Hawks run per game. When the run game struggles to gain traction against the league's best rush defense, and you're looking for a spark, it's no surprise that Darrell Bevell, perhaps with Pete Carroll in his ear, would dial up another, then another, and yet another explosive shot downfield.

These plays are powerful, not only in the field position game, but in the psyche of your team. In momentum. In crowd electricity. We've talked about this a hundred times. It's worked really well in the past, too. We obviously don't complain when it works.

No surprise that Seattle's only two explosive pass plays - an 18-yarder to Jermaine Kearse late in the first, and a 36 yarder to Golden Tate in the fourth - came during Seattle's two scoring drives.

While I originally wrote, following my live viewing, that the game-plan seemed too two-dimensional (run or deep shot), I've since looked at the flow of the game, the execution, and somewhat changed my mind on that. Regular Field Gulls commenter Cade Carlson summed up what I have been feeling over the past couple days, more or less, when he wrote:

We scheme to get guys in one-on-one match-ups. That's what we do and we usually capitalize.

Its BS to blame the play-callers when our guys lose the one-on-ones, but congratulate them when they win them.

Yes, Wilson and many other skill guys had down games. This is the NFL. [Teams are] going to have the occasional rough game. In retrospect, could have the game been called slightly differently? Absolutely, but as it was called, we were getting what we wanted. We were getting guys in a position where they are asked to win the one-on-one battle.

Wilson's analogy of days where you go 0-5 batting vs 5-5 or 3-5 was a legit and accurate analogy. Some of it is luck, some defensive play, some just not performing as well as possible. There will be times when a combination of that stuff culminates and just looks like a bad performance.

Overwhelmingly, protection held up. Russell Wilson got happy feet once and sacked himself, Arizona clamped down in coverage and sacked him twice, but for the most part, Wilson had time to throw. If you look at the tape, he attempted, and completed, all kinds of throws. They worked the middle of the field - completions to Ricardo Lockette and Jermaine Kearse, and an incompletion to Golden Tate - are shown below. He worked the sideline. He worked the deep middle, and the seams. He rolled out, he stuck in the pocket. He had some great throws and some regrettable throws.

Let's take a look at the tape.

Watching this play live, it appeared to me that Kearse first looked back too soon, then tried to muscle Patrick Peterson for position instead of just running his route up the redline. The result was a Wilson overthrow, but I'd lay at least part of the blame on Kearse for a poor route.

As you can see, the protection is fine. Wilson re-sets in the pocket and steps into his throw. The execution at the end was just off.

Later in the first, on 3rd and 3. The Cardinals sugar the A-gaps (bring potential rushers down onto each side of Max Unger) then rush with six. Seattle picks up the blitz, drives the rush down the line to the right, and Wilson re-sets to throw left. This is all text book.

The throw, however, comes out high, and Kearse, though he has just enough separation, can't come down with it. I put this on Wilson - this is a throw where you miss a guy like Sidney Rice - but he needs to bring the ball down a touch and give Kearse a better shot at it. Arizona defended this well by taking away the inside option too.

Note Zach Miller protecting one-on-one on the outside. Miller is so underrated.

My one complaint about this play is that perhaps you'd like to see a few quicker, shorter routes made available to Wilson. You can see that the inside route to the play side, though, is bracketed well, so Wilson goes to the outside.

Later in the first quarter, Seattle faces a third-and-six, and they execute with a slant to Ricardo Lockette. This is what you like to see on third down.

The thing that stuck out to me on this play was the pre-snap movement by the Cardinals and the communication by the Seahawks' offensive line in response. You can clearly see Breno communicating to Michael Bowie that despite the late movement, he still has one of the two outside rushers. Max Unger takes the bogie, #37, and Bowie correctly picks up the outside pressure.

Wilson hits Lockette quickly for a first down. If we're second guessing, I'd have liked to see a play like this on the previous third down - something quick and dirty to the inside. In this case, it works.

Third and 8 here, early 2nd quarter. 3rd and 8 from from the 9 yard line is a sucky position to be in, and the main reason Seattle was in this position in the first place was a delay of game penalty by Russell Wilson. Honestly, that's inexcusable, and for some reason, has been happening more frequently of late. But here we are.

Regardless - protection holds up, Kearse runs his route, and the Cardinals' defender, veteran CB Antoine Cason, makes an excellent play on the football. Just one of several key pass breakups that Arizona managed. A good team making plays.

Noteworthy here, apart from a great defensive stop, was the excellent job by Michael Bowie of seeing and picking up the defensive line stunt. Bowie did this several times throughout the game, and it's a big reason I was so happy about how he played.

More good from Bowie below. Note Bowie's excellent use of his hands - getting ahold of Darnell Docket and literally keeping him at an arm's length. You hear scouts talk about an offensive lineman's ability to keep defenders from getting 'into his body,' and this is what they mean. Note the difference between Paul McQuistan and Michael Bowie below. Who do you think has better control and leverage? Bowie has snakes for arms, and this is a play that you can see him use that to his advantage.

This ended up being a non-play because Tate was held prior to the pass, but it was a hell of a throw, over the middle, by Russell Wilson. It's a ball that Golden Tate would normally come up with too, I'd say; it's not easy by any means, but Tate would tell you he should make that catch. Instead of a 20-something yard gain, it's 5. Execution.

Later on that drive, game still knotted at 3...

This play killed me. My live reaction:

I've never sighed so loudly in my life

The sigh was more like a really loud "UGGGHHHHHHHHGGHHHH" because this is just a catch that you need to make. I understand that it's a tough play, but you can't get a better-thrown redline ball. Instead of a first-and-goal from the seven yard line, Seattle punts. Execution.

Seattle goes for the jugular - the game is still tied, they're looking to grab some momentum, so they dial up a deep bomb to Doug Baldwin on first down after a big Golden Tate punt return.

Personally, I love the call. By all rights, this shit should have worked. Doug Baldwin runs a great route from the slot, gets Jerraud Powers to flip his hips outside, Baldwin plants inside, and has the step. Powers turns completely around, recovers, and manages to not only break up the pass with an arm through Baldwin's outstretched hands, but he almost comes up with the pick. An exceptional, extraordinarily awesome defensive play. You're usually pretty dead if you flip your hips like that. Receivers call it getting the defender to 'open the gate.'

God, Baldwin's route is sick. The defensive play is sicker.

Just one of those days. 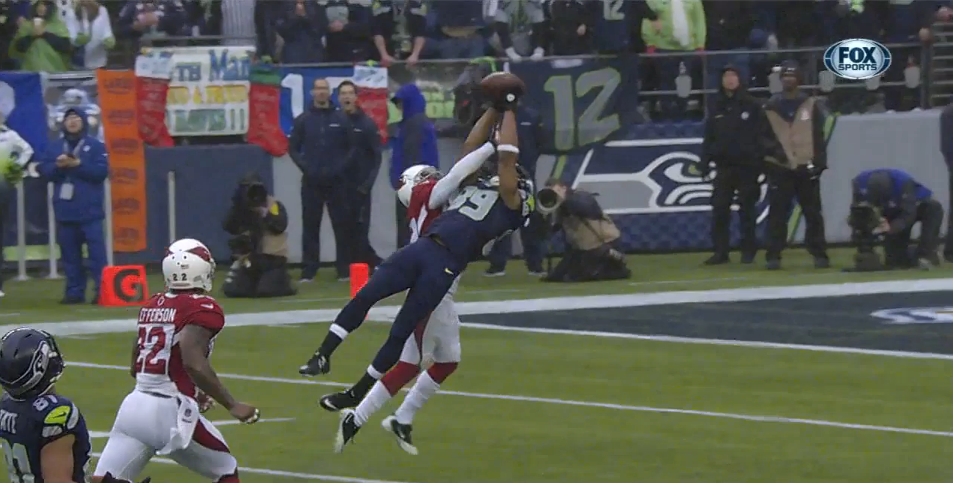 Jacson and Thomas both mentioned that Wilson was sensing phantom pressure in this game, and this play was the perfect example of it. Because I think we're to the point where we can criticize Wilson's individual plays without condemning him as a player - ask yourself this: Would Drew Brees have bailed on this pocket, this quickly?

No routes can develop because Wilson perceives the pocket closing in around him, then takes off. Seattle goes to 3rd and 12, backed up in their own end. Not ideal. Wilson gets sacked on the next play as he scrambles outside in the face of pressure and doesn't pull the trigger or throw it away. Coverage sack.

Not a good series, but relatively self-inflicted.

On Seattle's only touchdown scoring drive, Kearse makes up for earlier miscues with a hell of a grab over the middle. Russell lets a pass fly and again, puts it a little high, but for what seemed like the first time all day, his receiver bails him out.

Again, great protection, good pocket, and Wilson makes a throw over the middle of the field.

After taking a sack on a great middle linebacker blitz by Arizona, the Hawks are in 2nd and goal from the 11.

What we see here is great functional use of the pocket. Great movement by Wilson to find a better angle to throw, and he completes a great pass to Zach Miller in the corner.

Overall: obviously, not a good day, offensively. The run game was squashed in the 2nd half, and execution was very sloppy. That said, what Cade wrote above rings true - Seattle schemes to get one-on-ones for their receivers, and Bevell, the offensive line, and Russell Wilson put Seahawk receivers in a position to make some plays. They didn't. I certainly don't think that's an indication of a larger issue, because these are plays we've seen Tate, Baldwin, and Kearse make.

The main thing that Russell Wilson and Seattle's offense needs to clean up in Week 17 and beyond is their execution on third down. We'll see what they draw up this week to improve there.