DK Note: From the archives -- Mike wrote and published this article about the Seahawks receiver scramble rules back on January 8th. Whether you missed it the first time around or just need a refresher, hopefully you enjoy it.

One of the most important qualities that helps Russell Wilson to stand out among his fellow quarterbacks is his ability to improvise. We've seen this first-hand, with his many Houdini-like scrambles, and this skill has saved the Seahawks offense from trouble, keeping the play and drive going despite missed assignments

Of course, this success isn't all on the QB alone. It's one thing for a wide receiver to adjust his route based on coverage, but it's another to break off-script completely. Granted, this is basically what the passing game is playing with friends in a backyard, but consider that a receiver has to re-adjust the route to the open coverage and at the same time know where his QB is both an instinctive and coordinated effort.

This development is still undeveloped in terms of how it will advance the NFL passing game, but things haven't been analyzed before. For a wide receiver, these "scramble rules" offer them the best opportunity to make a play, even if things don't start out very well. Here's the author John Maurek's explanation:

Rules for when a quarterback is scrambling:

You need to remind the QB that completions are more important than trying to make a big play. He needs to know - don’t be afraid to throw out of bounds or RUN.

The rules for WRs are fairly simple, with one exception. That would be TOO DEEP and DEEP. TOO DEEP is when the WR has run the classic fade route and is 40 yards down field. He can come straight back to the QB’s vision. DEEP is when a WR has run a POST or CORNER route. If the WR sees the QB get into trouble right after his break, he can change direction and still gain depth.

For the wide recievers, if your route is:

TOO DEEP, come back to open grass

DEEP, break opposite but don’t out run your QB’s ARM

SHORT, go long keeping an eye on the QB

MEDUIM, stay at your level and stay or get into QB’s view

Obviously this set of scramble rules is very basic, and might be even wrong compared to the system that Darrell Bevell and Tom Cable put in. But there is plenty of evidence to have made it abundantly clear that this set of philosophies exist within the team:

You remember Baldwin’s catch at Carolina, one of several sideline grabs he has made this year. Wilson tried to scramble on third-and-eight with the Seahawks trailing 7-3 late in the third quarter but had nowhere to go. Right before two defenders collided with him, Wilson flung the ball, almost blindly, toward the sideline.

Baldwin had actually gone deep on the play, but worked back when he saw Wilson moving. As he did, he let his eyes wander, allowing him to sense how close he was to the sideline while still tracking the ball.

That multi-tasking sometimes gets him in trouble because his eyes aren’t always locked in — "Doug makes tough catches better than he does easy ones," wide receivers coach Kippy Brown says — but it was useful this time. When Wilson let go of the ball, Baldwin had a pretty good idea of where he was.

Now let's try and see everything we placed here on tape. We will use Coach Maurek's rules to help guide out understanding.

It's very clear that this play is going to target the right middle part of the field, with three receivers lining up on the one side and Russell Wilson in a shotgun formation. The quick gain aspect of the offense is also evident with how Jermaine Kearse, Sidney Rice and Baldwin all run short routes. Golden Tate here is used as the "home run" ball - meaning if he beats his man in coverage and the safety bites towards the three guys to his left, then Wilson will easily take the shot. 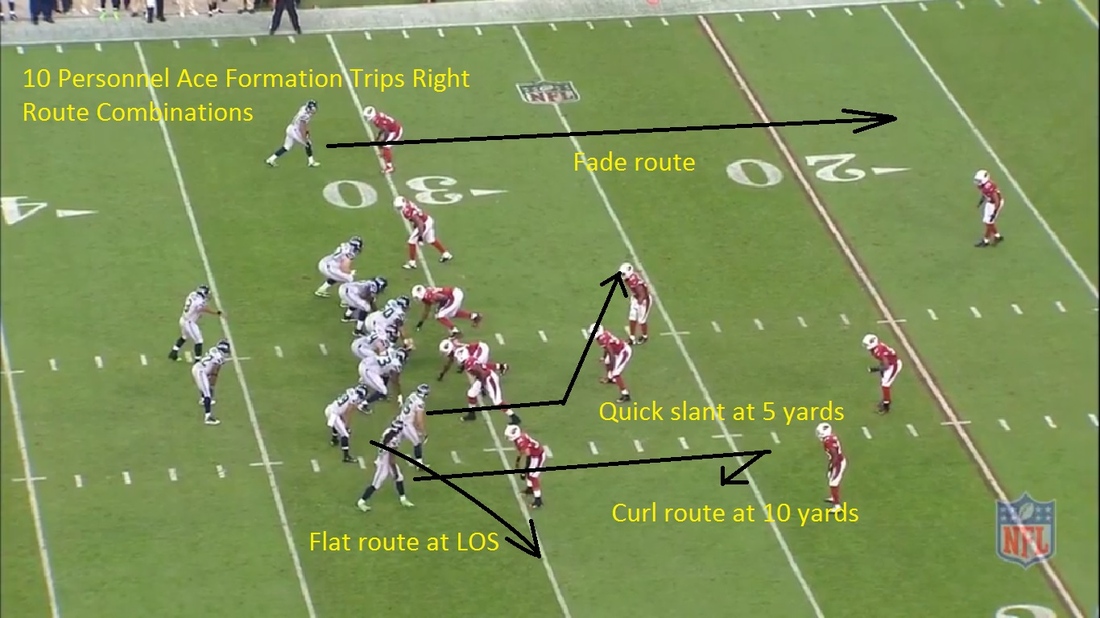 Within a few steps back the pocket is all but broken by the swarm of Cardinal defenders, flushing WIlson out. In their short routes, Kearse, Baldwin and Rice all reflexively react to this. In particular, Paul McQuistan's failed blocking forces Wilson to move to his right. 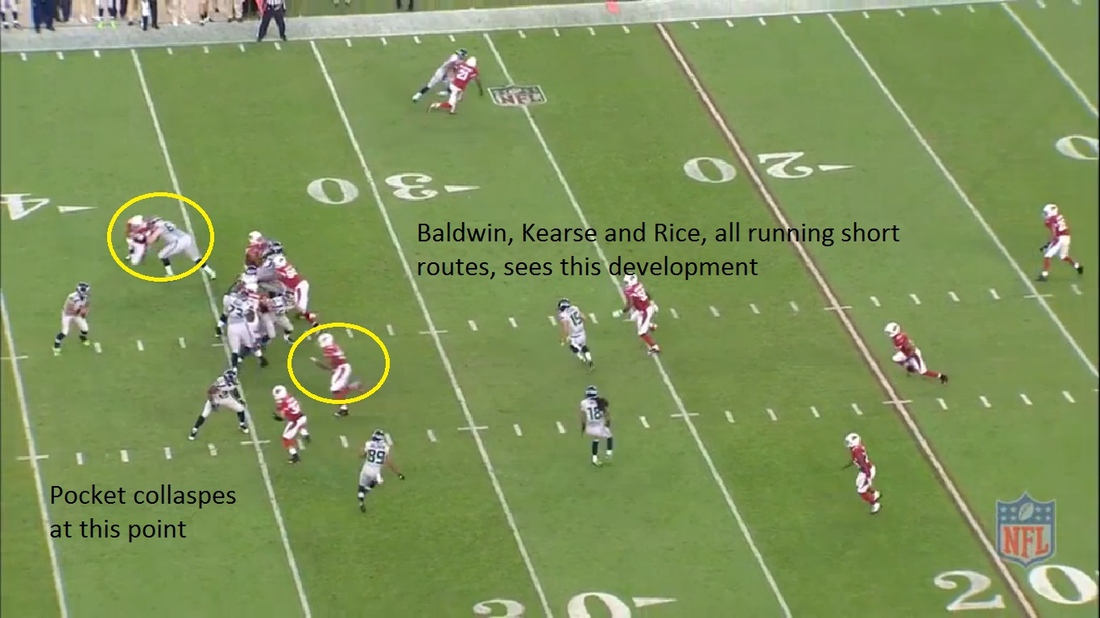 Scramble rules for WRs are indicative of what they are currently running at the point of scramble. Because Baldwin and Rice are both running short routes towards Wilson's side, they all consequently jump into a deeper level. Rice turns his comeback into a streak deep towards the endzone, while Baldwin immediately turns around from his flat and runs down the sideline.

Kearse, having run towards the middle of the field (and away from where the QB is) with his slant route, backtracks immediately towards the right side. Wilson easily spots Rice as the open man and launches it deep for the touchdown. 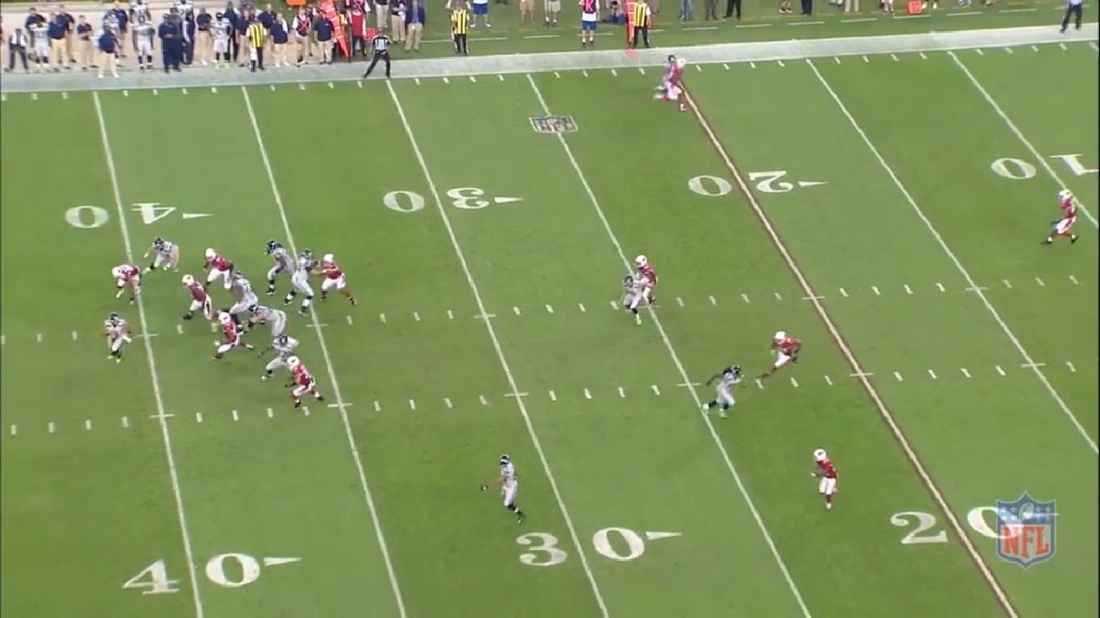 This play is most likely designed to be a deep pass play that maximizes on WR's getting one-on-one coverage and beating them. Both Baldwin and Luke Willson run run streaks up the middle, while Golden Tate has a comeback route towards the left side of the field after running along the sideline.

Marshawn Lynch has the check down route - he comes out after faking the ball, while Zach Miller stays in to protect. Meanwhile, the Rams are placed in a Cover-2 look, with two safeties covering the back end, and both cornerbacks playing "soft" coverage. 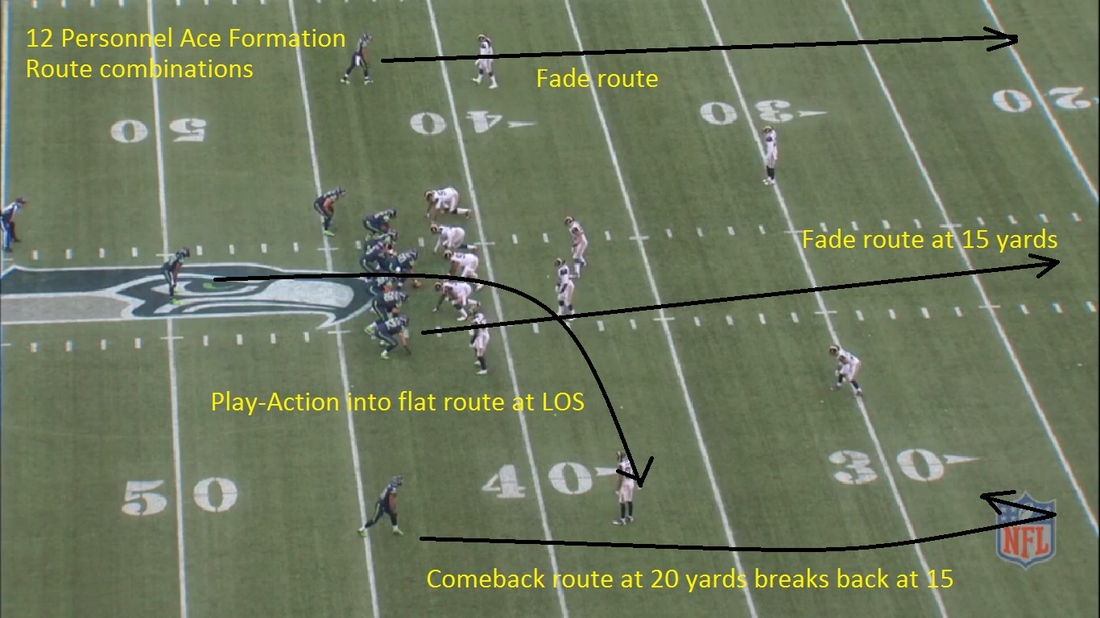 At the snap, everything goes pretty well. The play-action gives Wilson some time in the pocket, and the O-Line is actually doing a good job holding up against the rabid Rams' defensive line. You can see right here that Russell is reading the coverage - clearly the Rams are in zone, but the two safeties haven't seen enough from the QB to give help to Tate or Baldwin yet. Willson, running down the middle, has an open cushion. 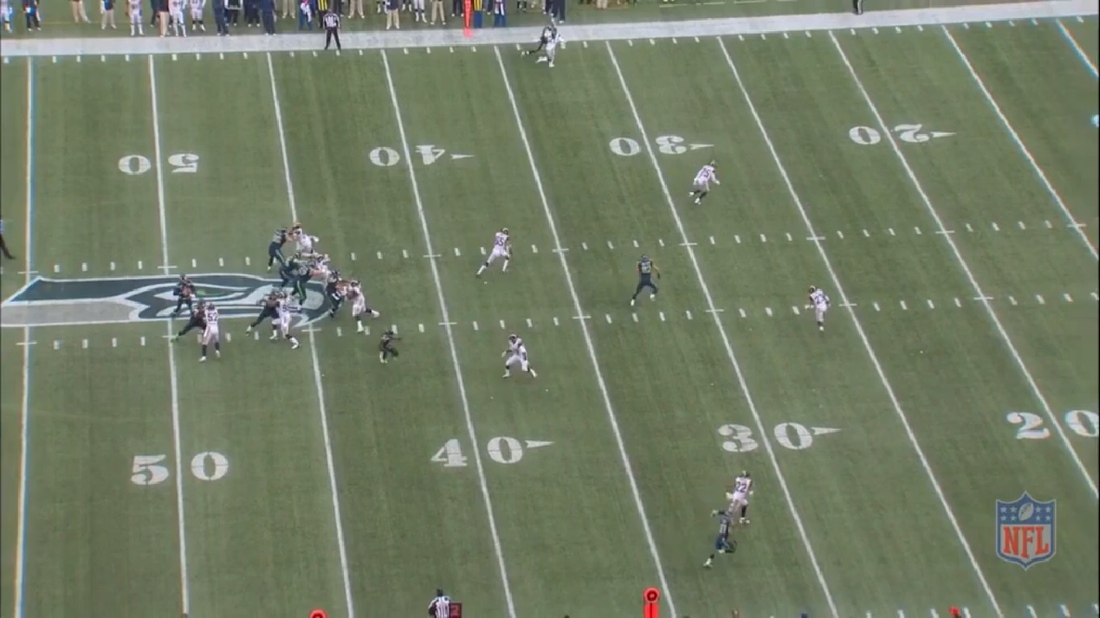 Then, abruptly, Wilson feels a bit too pressured for his own good, and cautiously bounces out towards the right side. This means that Baldwin is very much out of the play (barring some Brett Farve tendencies) and Willson, who was the primary target down the middle, has to re-adjust. 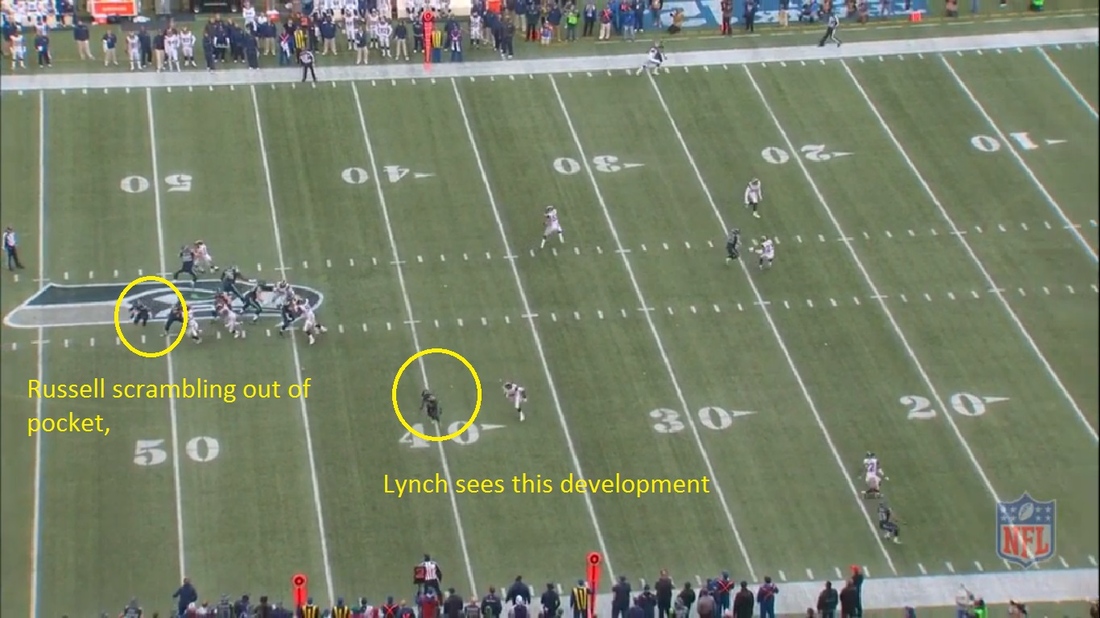 Disregarding Baldwin, the three remaining targets Wilson has time to throw to now immediately break into different places based on those scramble rules. Lynch, being the short man, immediately turns up field. Tate, with the medium comeback, pushes back down into the play and keeps contact with Wilson in the pocket. Willson, playing deep and furthest away from the quarterback, continues to run towards the open grass. 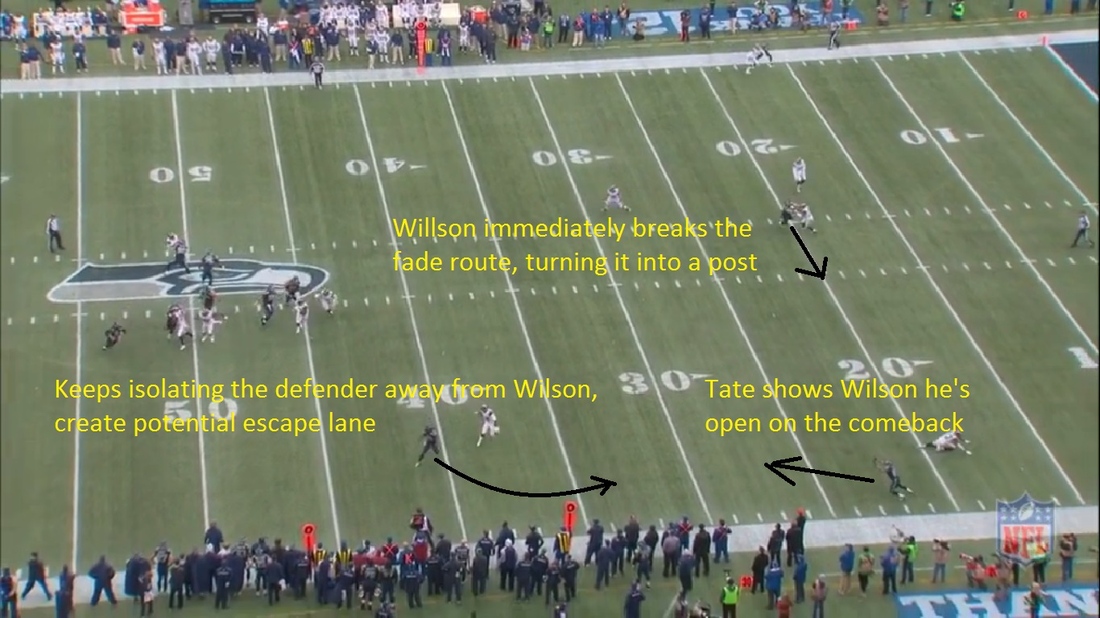 Wilson is scrambling near the numbers, so he should either make the throw to Tate, Lynch, or keep it and run. He makes the easy choice, and Golden manages to get the first down after breaking a few tackles and picking up some additional yards. 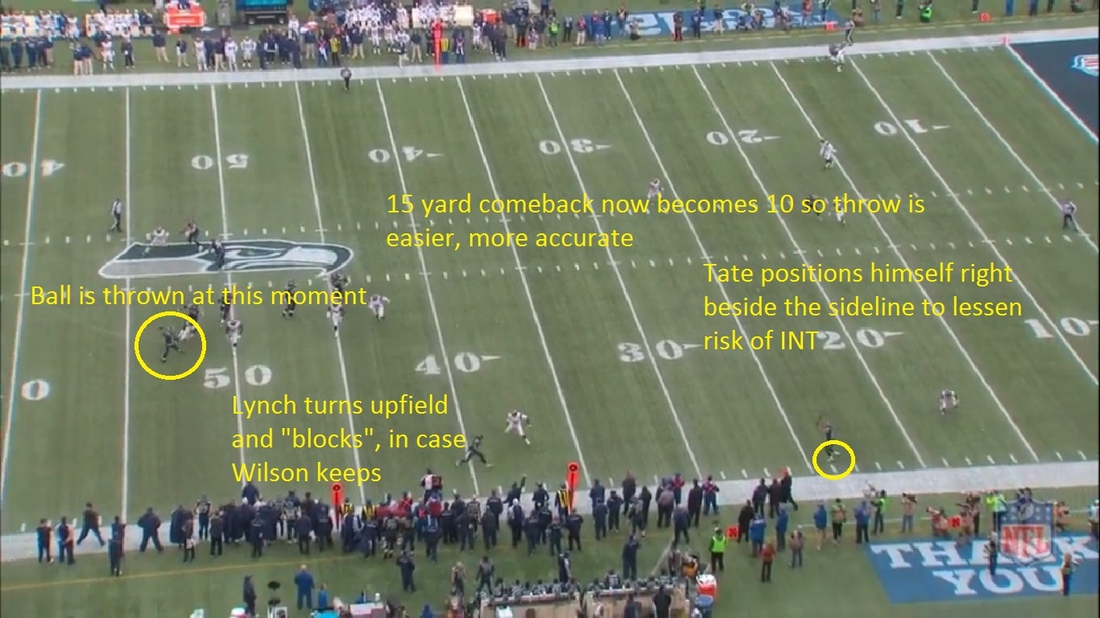 This is another example:

This play is actually designed to be more of a quarterback rollout towards the right side, with the intention that the catch will be made among single coverage because play action is moving towards the left. Tate, once again, is lined up deep towards the play-side while Doug Baldwin runs dig across the entire field. Willson, at TE, has the check-down, while Lynch and Miller both contribute to the "run" aspect of the play. 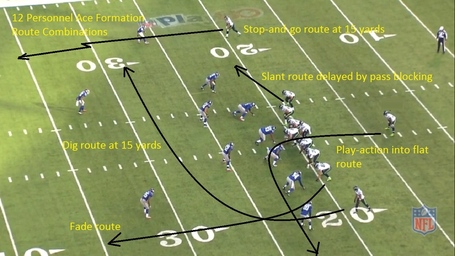 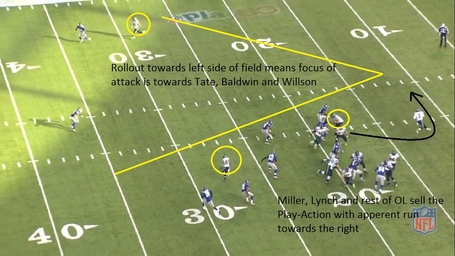 Once again, the pocket collapse and the Giants, running a Cover-3 with QB spy, don't entirely bite on the fake. Wilson then swims upfield and retreats back towards the right side (where most of his offensive linemen are) to make the play. 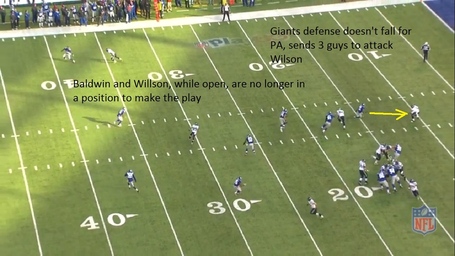 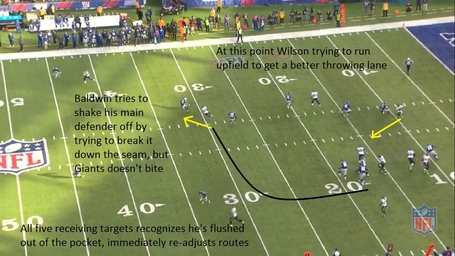 Again, let's follow the scramble rules. Tate is too deep, so he strategically moves himself back towards the middle of the field. Baldwin is at the middle of the field so he kind of runs the same route in case Wilson decides to make the throw to where he wants to be. Miller, like Tate, is also deep on the play so he comes back to where Wilson is. And while Lynch doesn't exactly "go deep" here, he does sort of run a streak from the end of his position. 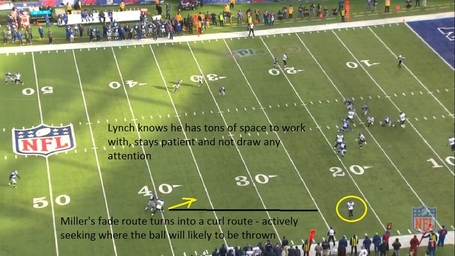