1: the equipment, merchandise, or materials necessary to or used in a trade or business

The 2014 NFL Draft is less than two weeks away so I thought it would be a good time to look deeper into one of John Schneider’s most tried and true draft habits: trading down, and where some of the good trade down possibilities are this year.

Traded back from 2.40 to 2.60 as part of the Charlie Whitehurst deal with San Diego. Whitehurst essentially cost a 3rd round pick. Hawks ended up selecting WR Golden Tate at 2.60.

Traded back from 4.104 to Tennessee’s spot at 4.111 in a deal that also brought Seattle Lendale White and Kevin Vickerson. This deal also included swapping picks with the Titans in the 6th round. The two trade-back picks from Tennessee yielded CB Walter Thurmond and TE Anthony McCoy. (Incidentally, Tennessee ended up with Alterraun Verner at 4.104.) 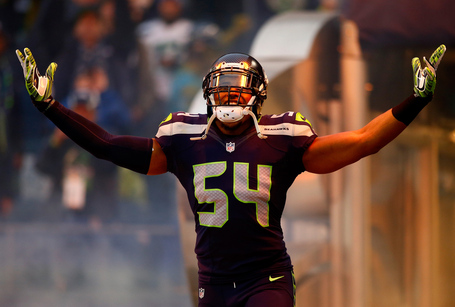 Traded back from 2.56 to 2.62 while adding Baltimore’s picks at 5.165 and 6.199. These picks became RB Christine Michael, and then a subsequent trade UP to get DT Jesse Williams.

What do we see?

First thing you should notice is that the Hawks have traded back in the 2nd round every year. Arbitrary but true.

The second thing I notice is: San Diego, Tennessee, Detroit, Philadelphia, New York, Baltimore. Doing business with everybody with no noticeable pattern or "buddy deals". But Seattle has stayed away from trading within the NFC West on these big deals. There has been one smaller trade amongst Hawks and an NFC west foe that I could find (trading a 2011 6th round pick to SF for Kentwan Balmer), but it is safe to assume in-division trades will be uncommon.

Another thing I notice is the size of the step back they are willing to take in trade. The 2010 trade back was rather large, but it came on the heels of drafting twice in the first round (Okung and Earl). I’m guessing the 2011 trade back was an important lesson, as dropping 18 spots may have caused Seattle to miss out on Justin Houston, Demarco Murray, or Stevan Ridley. Predominantly, though, we find that in 4 of 6 trade backs (and all 3 trade-backs in the last two drafts), Seattle descends no more than 7 picks from their native spot. These controlled descents are so crucial to controlling your draft.

With Seattle currently sitting with only 6 picks in this draft (32, 64, 132, 146, 172, 208), I think it’s safe to assume at least two trade-backs this year. By combining a couple trade-backs, and augmenting with trading future 2015 picks that will be replenished with the compensatory picks Seattle is surely due next year, the Hawks should fairly easily get back up to 9 draft choices this year.

And this is where we’re starting this year…these are the "point" values (supported by the classic Jimmy Johnson draft pick value chart) of the picks Seattle currently owns:

Let’s take a look at some trade scenarios:

Currently, I would expect Cleveland to look at Sammy Watkins or Mike Evans with their pick at #4 overall…then at #26 many expect them to address their need at QB. I happen to think it might make more sense for them to look at a high-ranking CB at #26, and then look at QB at #32…right before Houston picks at #33. They’ve got the ammo to do it. Just to get in front of Houston at 33, Cleveland would send #2.35 (550pts) and 4.127 (45pts) to Seattle. This trade would leave the Browns at 3-1st, 2-3rd, and their native picks in rounds 4-7. Sum total: 9 picks for Cleveland. 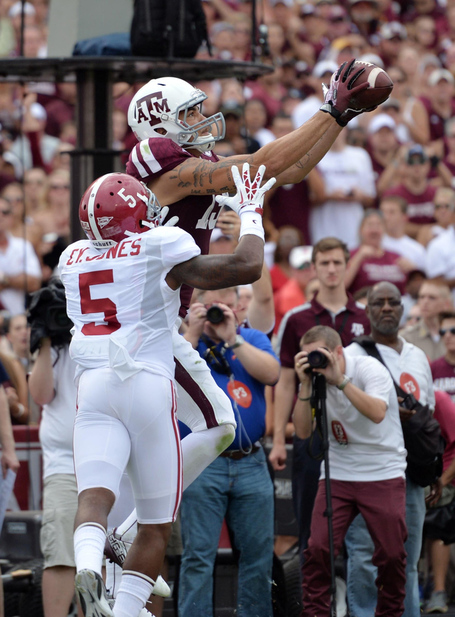 It would make no sense for Houston to trade up from 33, so we’ll rule them out.

The Redskins currently only have 6 total draftpicks after trading their 1st rounder to the Rams so they could take RG3. Cross them off.

Oakland doesn’t have a ton of ammo after trading their 5th to Seattle for Flynn, and trading their 6th to Houston for Schaub. (Yeah, that’s right…the Hawks got more for Flynn than Houston got for Schaub.) The Raiders have a couple extra 7th rounders, but that’s not helping us much when we’re trying to add at least a 4th.

Atlanta has a decent amount of picks to trade from, but the prevailing rumor is that they will use some of that cache to move up from #6 overall to get Clowney or Robinson.

Tampa has no 4th round pick after trading it to the Jets for Revis.

Which brings us to Jacksonville. The good news is: we have some friends in Jacksonville and the Jags have 11 draftpicks. The bad news is…they like the same players as us. Especially on defense. Part of my personal strategy for trading down from the 1st would include staying in front of Jacksonville. Therefore, we cannot drink the wine in front of you.

And trading down farther than Jacksonville would put us at a drop of over 7 picks…which, as I pointed out, is probably too big of a drop.

So, this early, we’re trading with Cleveland or not at all.

If Schneider is to keep par for the course, he will be trading out of this pick in the 2nd.

Unlike in the trade out of #32, I don’t mind doing business with Jacksonville here. Maybe it’s because this would be such a great spot for the Jags to grab a running back (a position Seattle is probably not looking heavily at) that I’m not as concerned about them vulturing a guy I want. 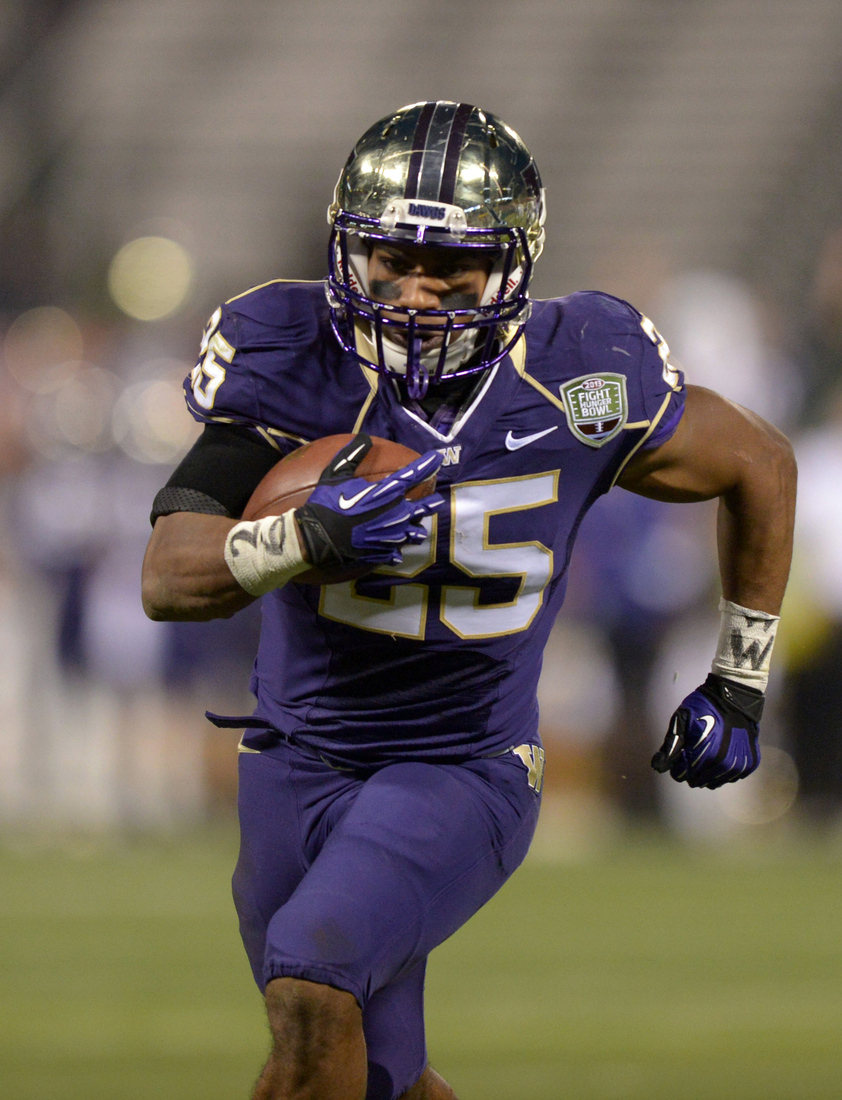 Cleveland will once again be in play here. Seahawks would conceivably get Cleveland’s #71(235pts) and their #127(45pts). This is a place where I’m considering adding in the Seahawks 2015 3rd or 4th round draft pick to get Cleveland to bump it up from #127 to their pick at #106.

If the Hawks board has more severely fallen away from them, it may be their best bet to take a bigger drop back here and try to solidify their position(s) in round 3-4-5. In this case, I think Schneider would do well to call his old buddy John Idzik in New York and see if he’d trade his #80(190pts) and #104(86pts) for the Hawks #64. The Jets begin the draft with 12 total draft picks, so they could also look at #80(190pts) + #115(64pts) + #195(13.4pts). The more picks a team has, the more different trade scenarios become possible. (Worth noting that the Jets have 4 picks in the 6th round alone, but three of them are non-tradeable comp picks.)

For similar reasons, and in a similar trade, Seattle could move back to #76 overall by giving Detroit #64, and the Lions adding in #111.

These trades are generally contingent on how Seattle values one or two players, at a couple of positions each. I won’t specify yet who I think one of the great value picks of the draft is, but I do think he could be available as low as #80, thus allowing the 2nd to 3rd round part of the trade work. Then, if you have a couple guys you feel more confident in than the rest of the league at position C, that will be available in the 4th…this trade back becomes more fruitful.

A large part of executing these trades, is having enough confidence in your draft intel to trust that the league is undervaluing Player X and Player Y. Having that correct intel can allow you to pass on the obvious Player A and Player B, gain extra draft capital to allow you to continue volume drafting, while still locking up X and Y…the players of comparable talent to A and B, but at a round discount…which, in turn, gives you the pathway to winning the draft.

Continuing the round-by-round trade scenarios…we reach Seattle’s pick at the end of the 4th round. Only it isn’t really the end of the 4th…there are 8 compensation picks for other teams that immediately follow Seattle at #132. None of those picks are tradeable, so the Hawks would be moving back a minimum of 9 spots. Not ideal so I’m not recommending trading from here at all. 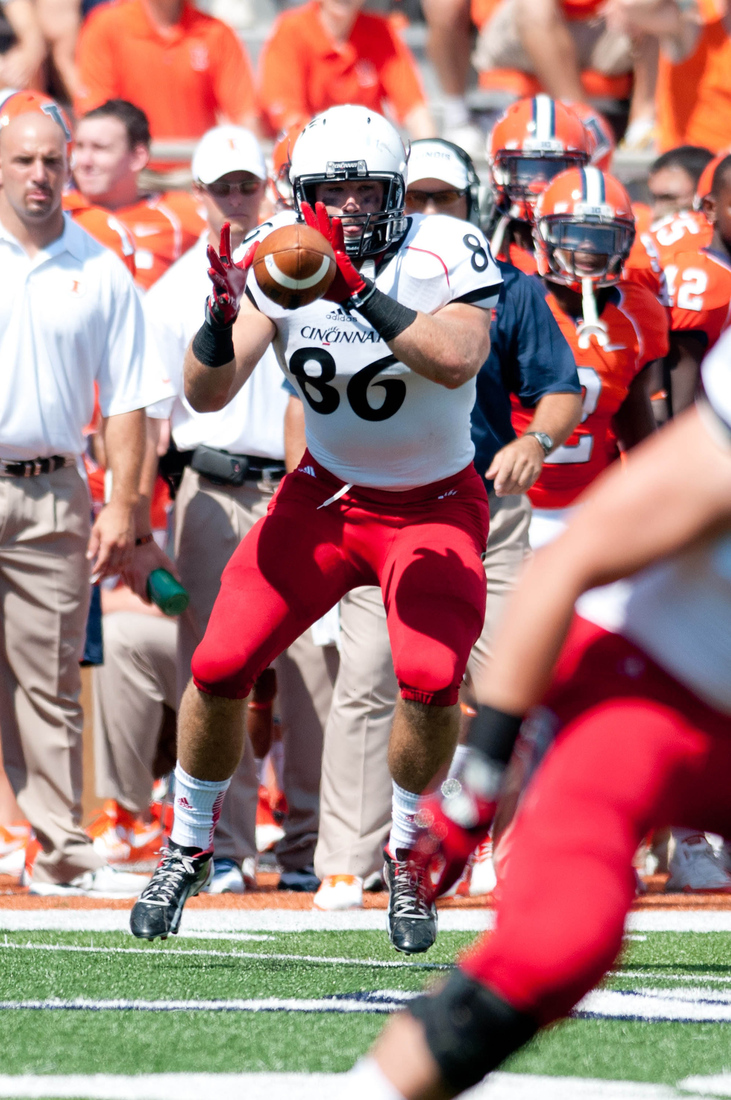 This late in the draft, pay close attention to Houston. They have 5 total picks in the last two rounds. Hawks could easily drop back 5-9 spots, pick up one of Houston’s 6th’s and one of their 7th’s, thus replenishing the 7th rounder we gave up for Terrelle Pryor.

The other team to watch as a trade partner on day 3 of the draft is Dallas. The Cowboys have 11 total draftpicks, but a whopping SIX of them are in the 7th round. If the Seahawks want to get the drop on UDFA, the Cowboys are the team to work with.

Any number of these trades could also include a 7th round pick as many teams see those as throwaways anyways.

Put me to a decision here today and I’m looking at trading out of #64 and I’m happy to do any of the deals with Cleveland or the Jets that will add that early 4th round pick, in addition to a 3rd rounder. Then, my second choice would be to move back from #146. It’s not our native pick…it’s kind of thievery that we got that pick in the first place…so I’m cool with trading back to add one or two volume picks.