Ever wanted to get your hands on the Seahawk's playbook on offense?

Well that's not what this is, but it might serve as an approximation. I went through the NFC Championship game and drew up the routes that the Seahawk receivers ran on each passing play. The goal is to identify some reoccurring route combos, see if the Seahawks have any particular tendencies based on down and distance, and to see if there are any interesting tidbits to gleam about how Carroll and Bevell are looking to attack a defense.

Plays are sorted chronologically by down. The images should be pretty straightforward for anyone who has played a game of Madden, but here's a run down to help you out:

The routes are a mostly accurate representation of where the receiver was on the field and where they made their cuts. The exceptions are a couple of plays where a cut was made further down field than the screen shot shows. Those routes got compacted somewhat. 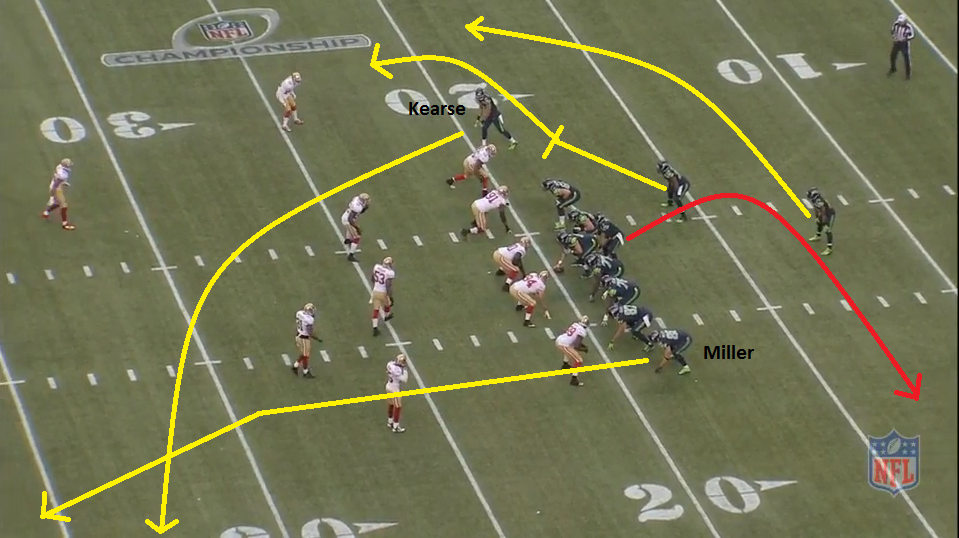 Strip sack by Aldon Smith. Kearse came open down field on this play, but Smith's pressure killed the play. This play design could be considered a template for Seattle's passing attack. Play action, natch, and Seattle likes to flood one side of the field with crossing or out routes, a deep route to clear, and a safety valve leaking out the backside of the play. 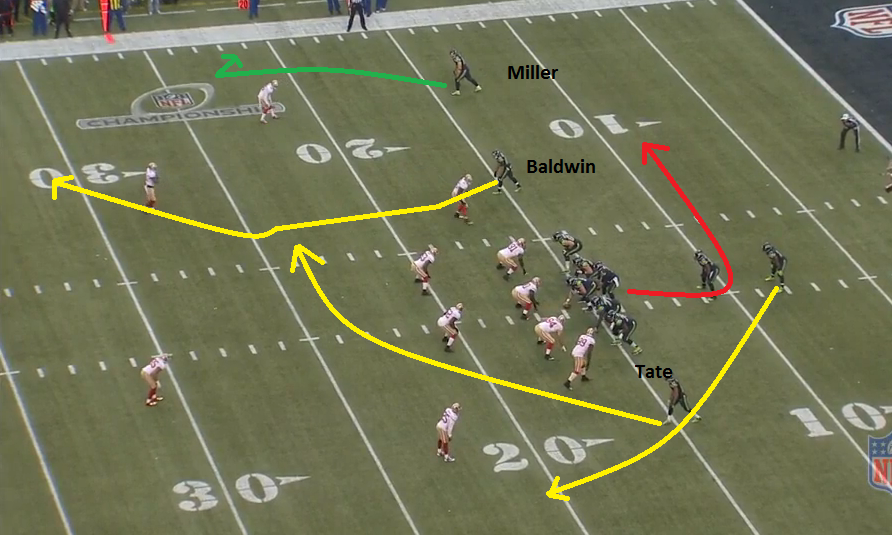 Very similar to the previous pass play in concept, but with the wrinkle of Miller being split wide. Baldwin's route in particular is something that will be repeated often. Baldwin wins inside leverage, but instead of using it to run an in breaking route he makes a very slight cut in before break back to the outside. These tiny double moves are common. 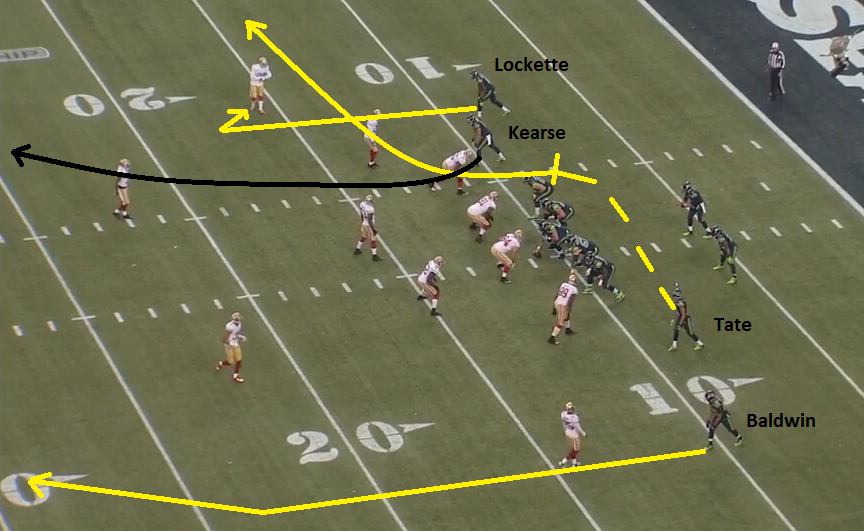 Again, same concept ran out of a slightly different package. Tate goes in motion across the formation before running his out route. Lockette is lined up further inside, but is still the furthest outside receiver and runs a curl. Kearse is lined up inside and, like Baldwin on the previous play, gets inside leverage on an out breaking deep route. 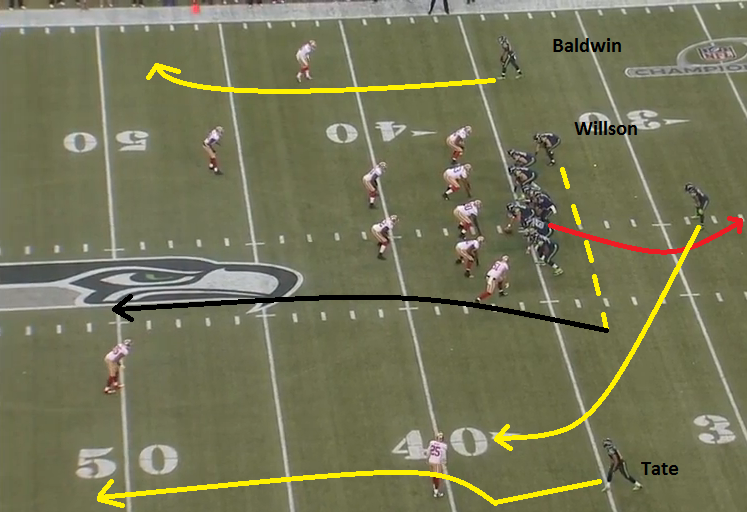 This is a much more aggressive play, with every route outside of Lynch's designed to go 10+ yards down field. Willson comes wide open on this play, but he's the second read and maybe pushes down field too quickly. By the time Russell can get him the ball the safeties have converged and put a licking on Willson, forcing the incompletion. 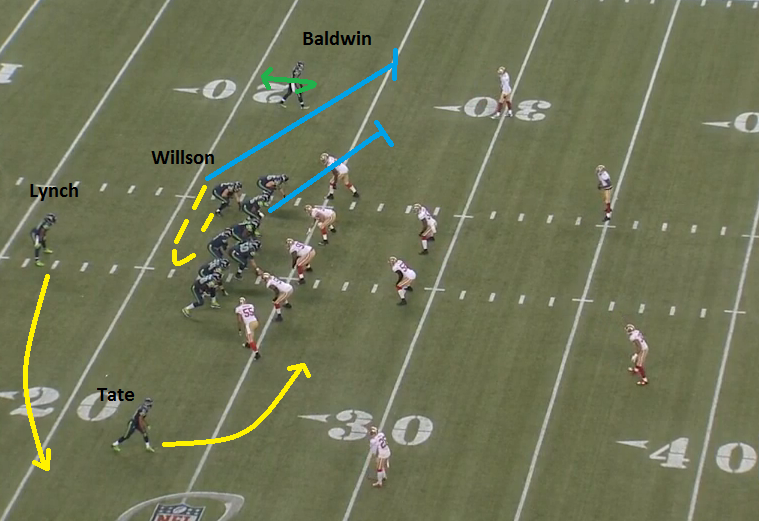 This seems to be Seattle's standard screen concept. Two or three blockers, at least one of which is an offensive lineman, leak out to screen on the play side while the receiver on the opposite site of the field runs a crossing route. Judging by the intensity the other receiver runs that crossing route, Wilson is never expected to actually throw that route. 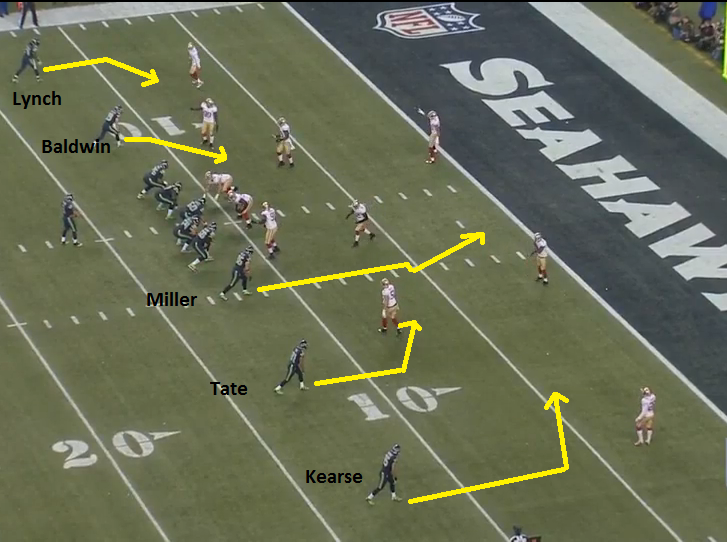 Quick hitting slants seem to be a focus for Seattle's goal line passing attack. All of the receivers are looking for the ball immediately when making their cuts, but the Niners had this covered up and sacked Russ for a 5 yard loss. 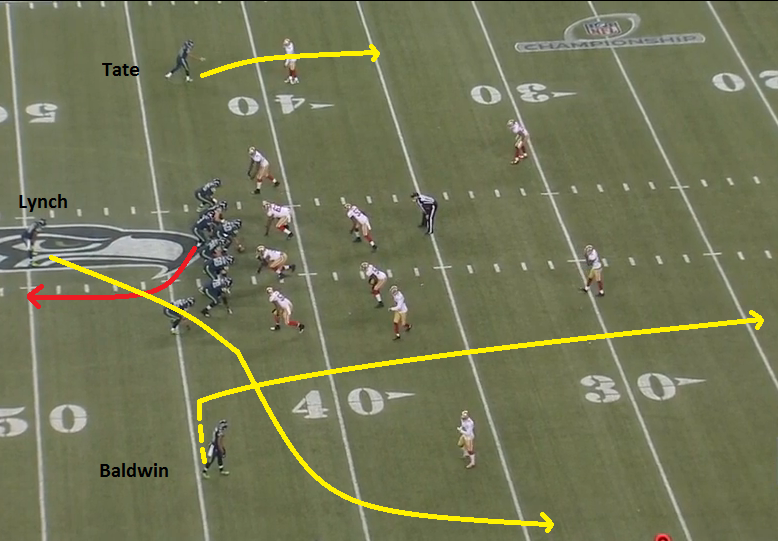 Another aggressive shot play off play action. Baldwin was the primary read on this play, and Golden Tate straight up didn't run his route. He wanders out to the end of the yellow line and then just hangs out. Russ scrambled for 3 on this play. 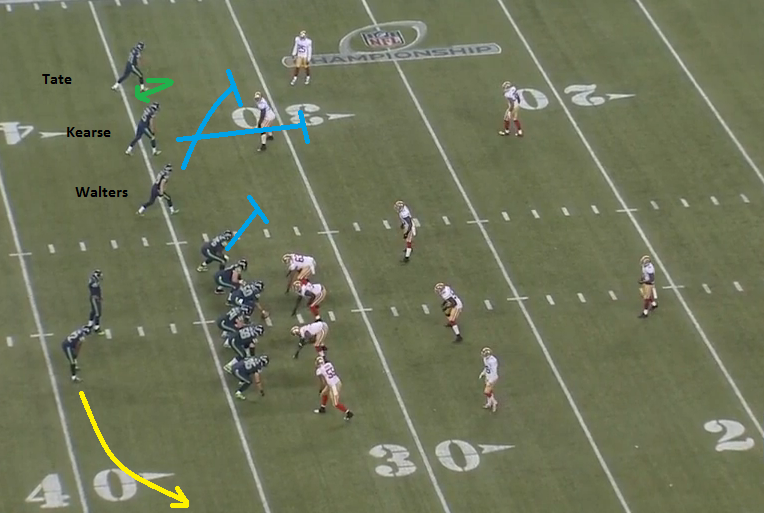 Another screen, this time with a couple receivers and an offensive lineman blocking. The receivers usually sell these screens by first taking a step forward before coming back a yard or so for the ball, as Tate does here. 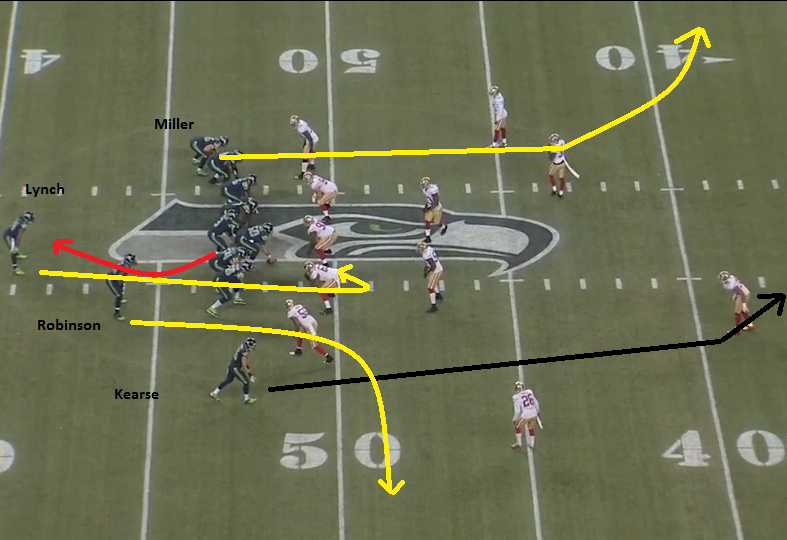 Here we see the deep routes breaking away from the out route instead of with the crossing/out route as in the previous plays.

1st down summary - Every pass play Seattle ran on 1st down came in 1st and 10 situations. Talk about predictable! We can also see that Seattle's goal on first down isn't necessarily to put them in manageable situations for 2nd and 3rd down. A potential second and long doesn't cause them to waver from their commitment to chunk plays. That probably shouldn't come as a surprise.

Also a bit interesting is that Seattle didn't run a single pass play on first down in the 4th quarter. Of course, this is just a one game sample. 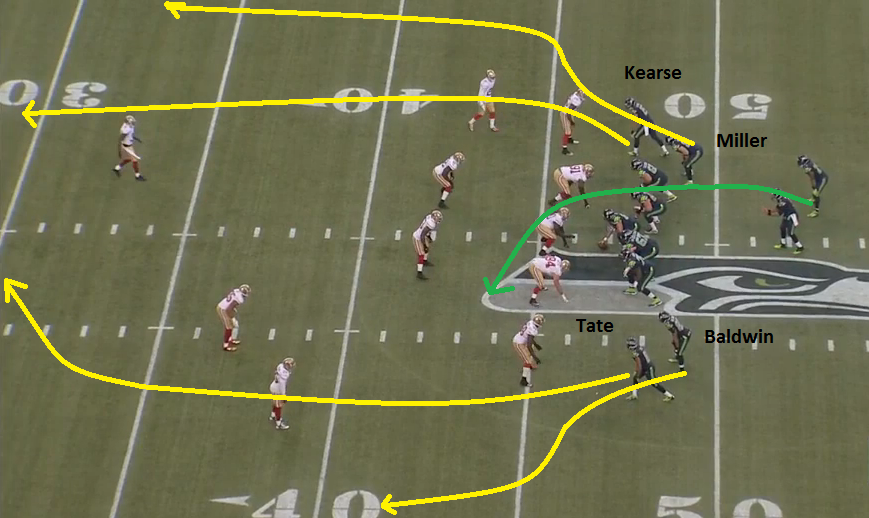 When you look at how often Seattle goes full Sex Cannon with Marshawn as the sole outlet option, it's maybe not a surprise that CMike was held back until they were positive he could execute in the passing game. 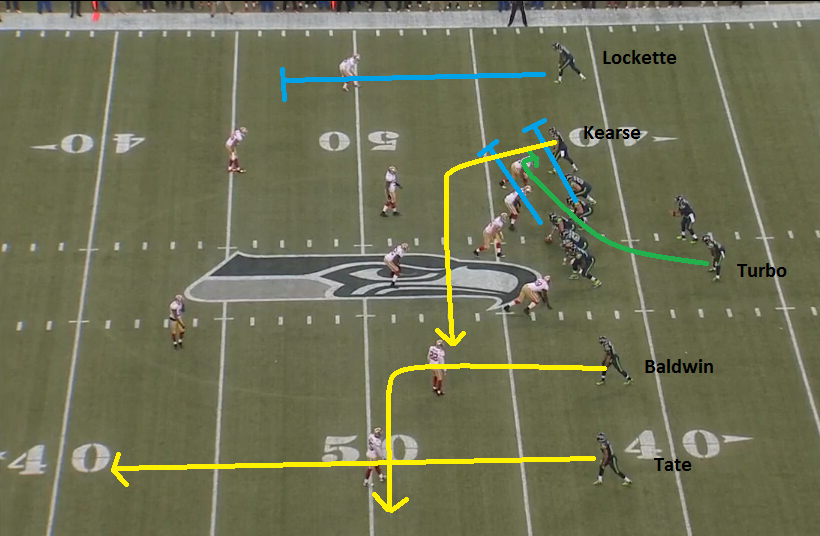 Here we see Seattle setting up for a more manageable 3rd down after facing 2nd and very long. A screen play is a pretty great way to run something safe while still keeping the potential for a big play. It's no fullback draw, but it'll do. 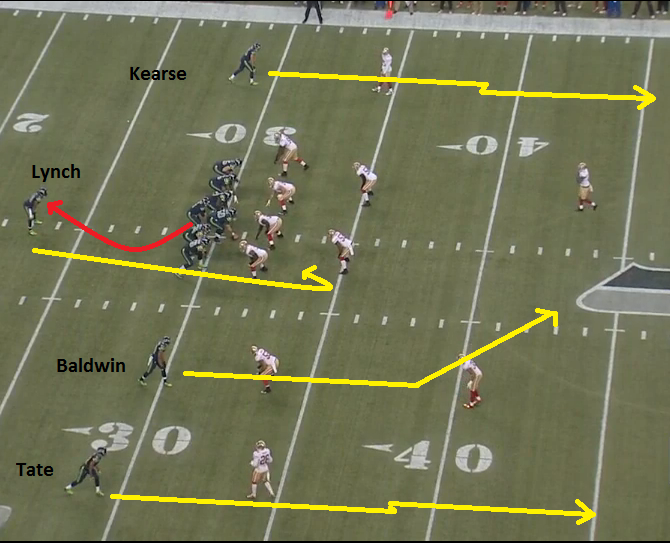 Seattle gives the defense two opportunities to bite on this play, first on the play action and then on the hesitation moves by the outside receivers. Unfortunately the Niners get great pressure on this play and Wilson is forced to throw it away. 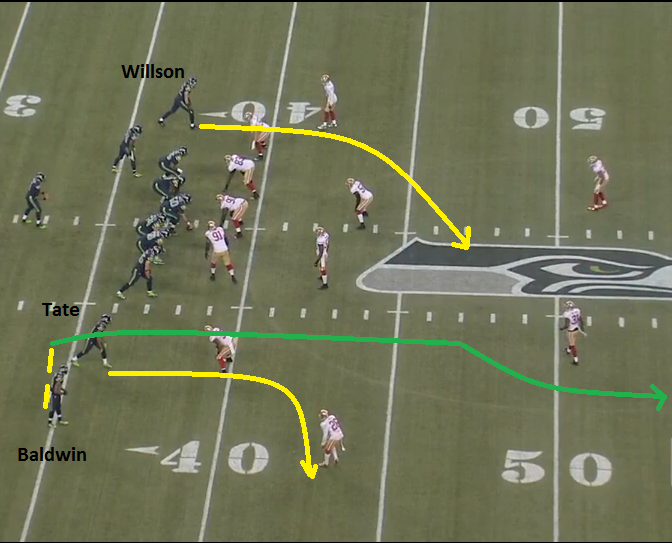 Another template play. Baldwin gets inside leverage, breaks outside like he's running a corner but then take his route straight up the redline. Willson and Tate flood the side of the field beneath the deep route. 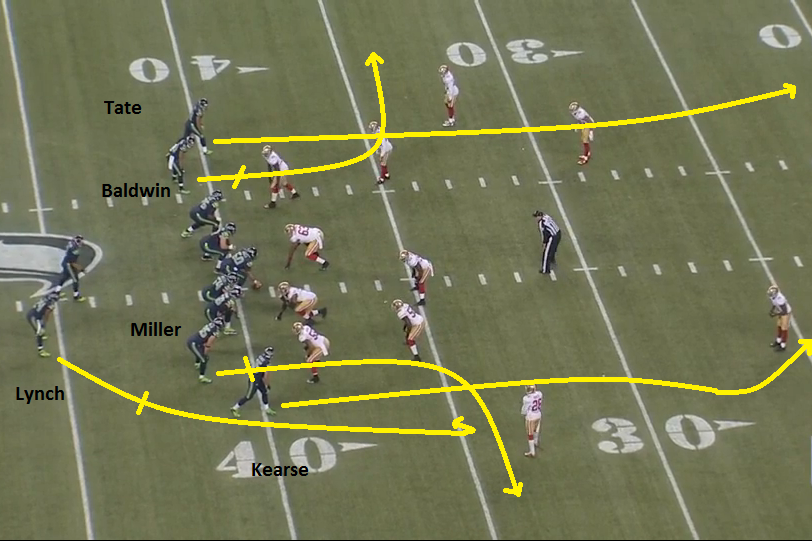 I liked this play quite a bit with the tight formation letting the inside receivers chip before releasing in their routes, buying a moment for the deep routes. It wasn't enough though with the Niners pinning their ears back in an obviously passing situation. Wilson is sacked for a loss of 1. 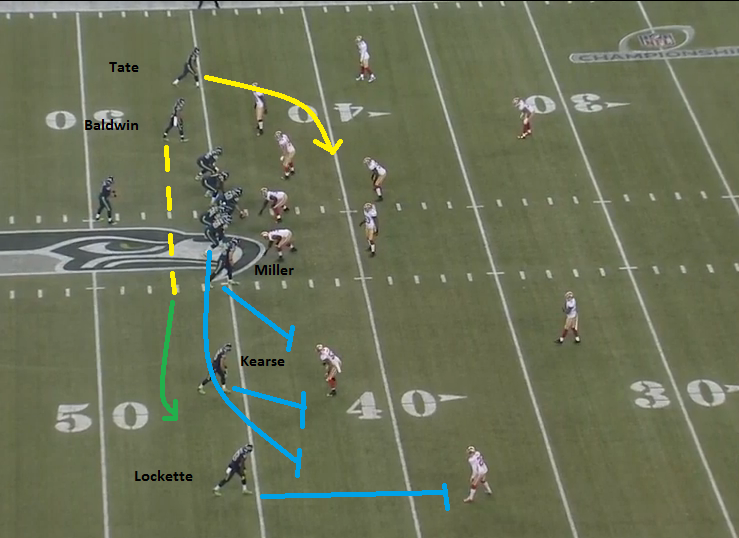 Seattle seems to like to use Lockette as a deep threat on screens to buy a little extra cushion on the play side. It's a cool idea. 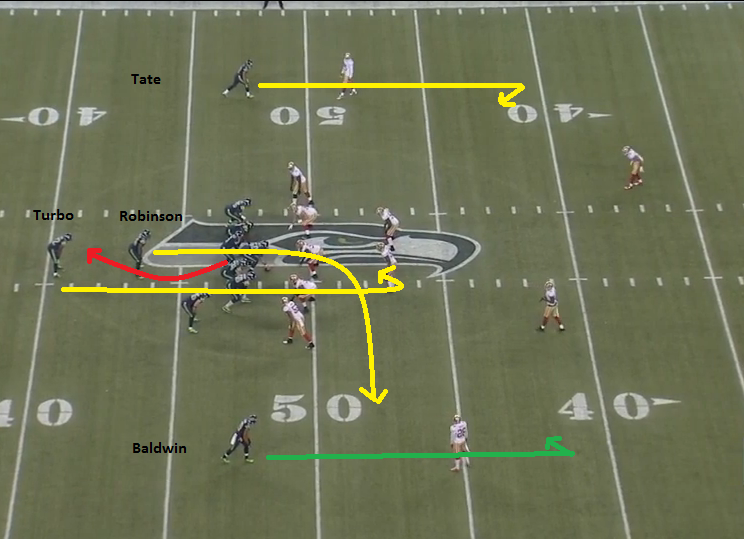 Here we see the all curls route, and it's the most successful one that Seattle ran that day. I'm not sure if there is a check that the receivers have that causes them to break off of their route or if these are called plays. 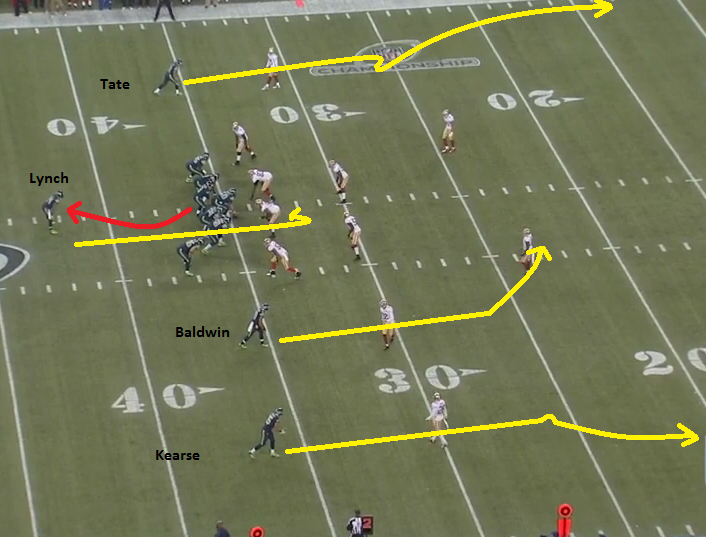 The stop and go on the fly routes is a little exaggerated here, but they were more pronounced that some of the other plays. This is another play where Niners pressure and Seattle's lack of quick options results in a loss, Wilson gets an intention grounding penalty and loses 16 yards. 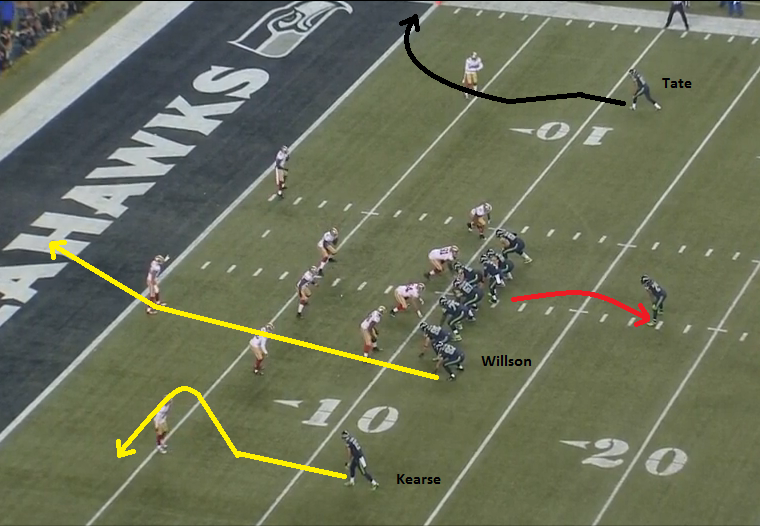 Each of these routes show up frequently in this area of the field. Kearse and Tate both run counters to the slant that Seattle likes to run near the goal line. Tate is running a type of slant and corner route,while Kearse runs a button route. The skinny post from the tight end or slot position is a staple. 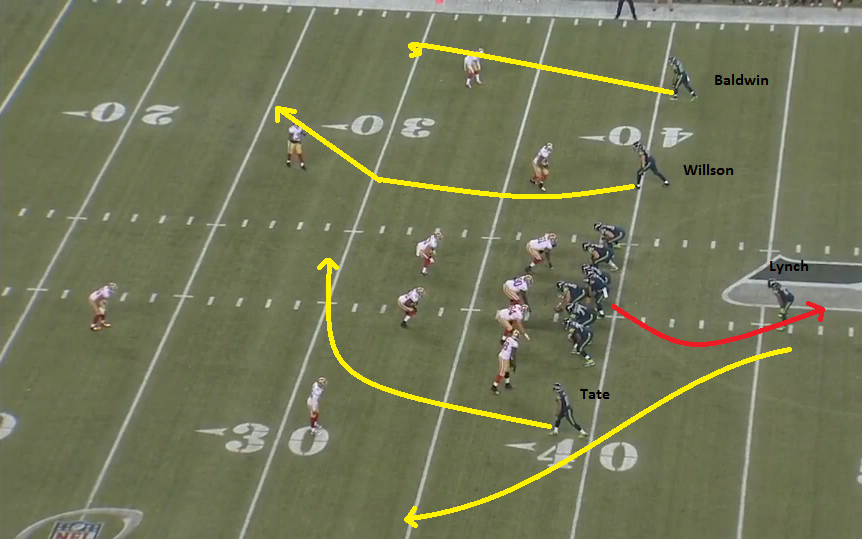 This is essentially the exact same play as the second play in this post, but with Baldwin moved outside and Willson instead of Miller. 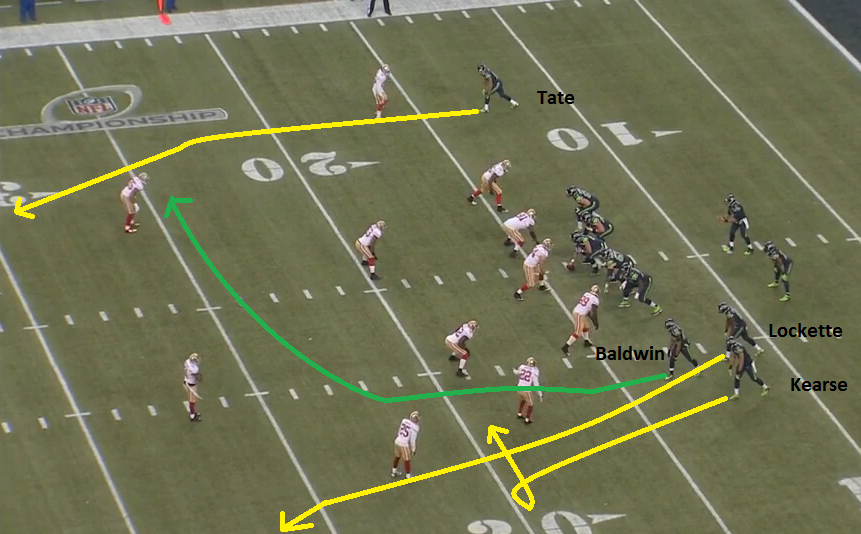 This is Seattle playing off their bread and butter route combinations. It's a distinctively different play from what we've seen above, but it's not all together foreign either. 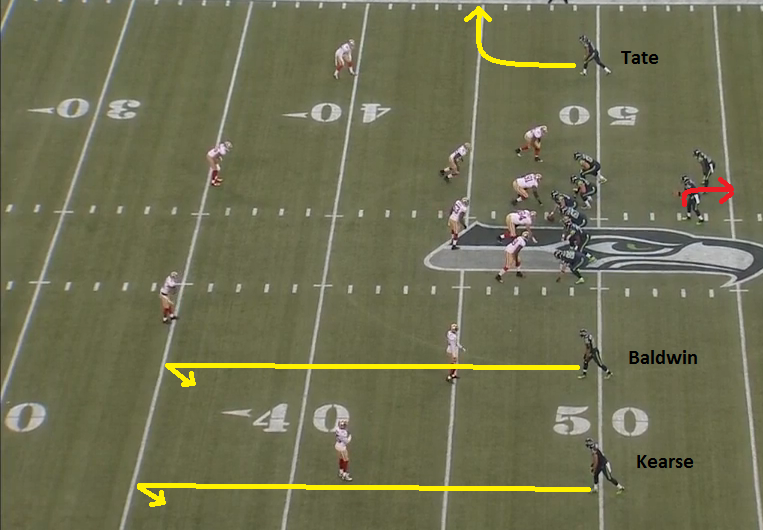 Curls again. This play was depressingly well covered and, in my opinion, not particularly well designed. The two receivers are too close to each other and too far down field for this play to have much of a chance. Wilson was sacked for an 11 yard loss. 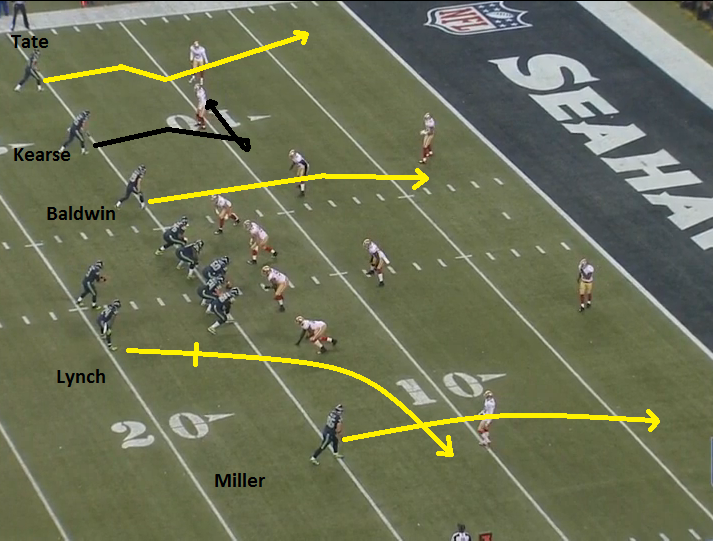 More goal line routes. Kearse and Tate are selling slants that they break off into other routes. Baldwin is running the inside skinny post. Miller is making you wish they had a more dynamic TE that could threaten the defense when he's isolated on the weak side like that. 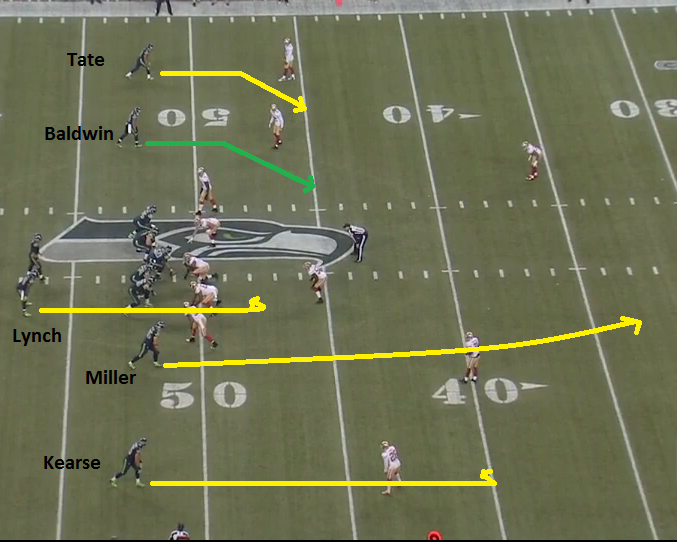 Of all the plays above (that aren't goal line plays) this is the first that is really different from the rest. This has a very West Coast offense type of feel to it, working a levels concept with the slants on the left side, a tight end stretching the seam, and a plain Jane curl on the right.

This also strikes me as a pass play designed to get the clock running. The routes are uncharacteristically quick hitting, everything breaks in, and given the situation it would make sense. It's a great play call in that it gives the team both the option to run out clock before punting and converting the first down. 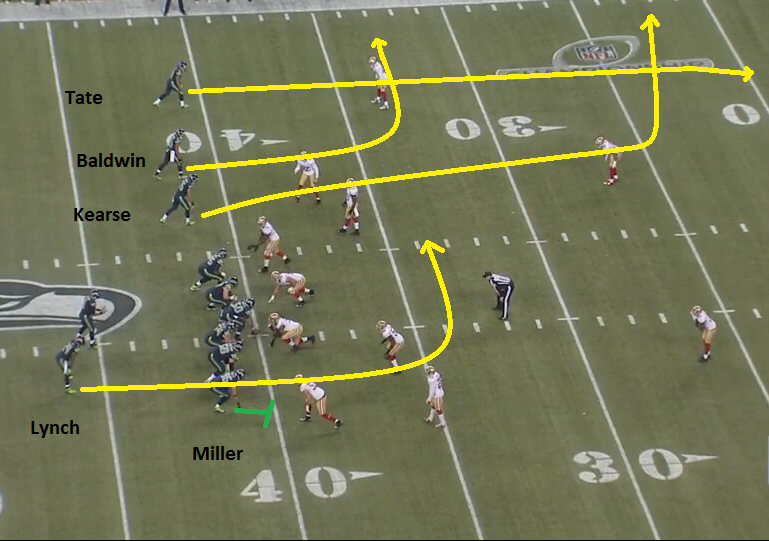 Staple play, but with the added fun wrinkle of throwing to a tight end that didn't actually run a route. The Niners got great pressure and Wilson flicked a little shovel pass to Miller, who had long since lost his block, about 10 yards behind the line of scrimmage. Gained 2! 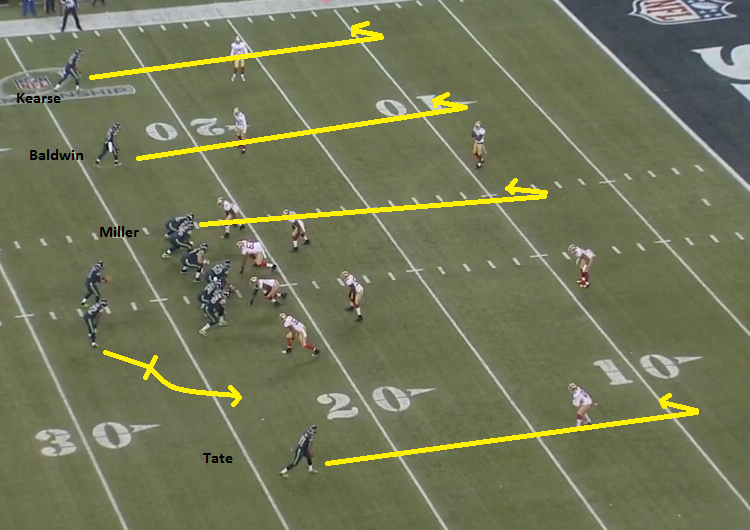 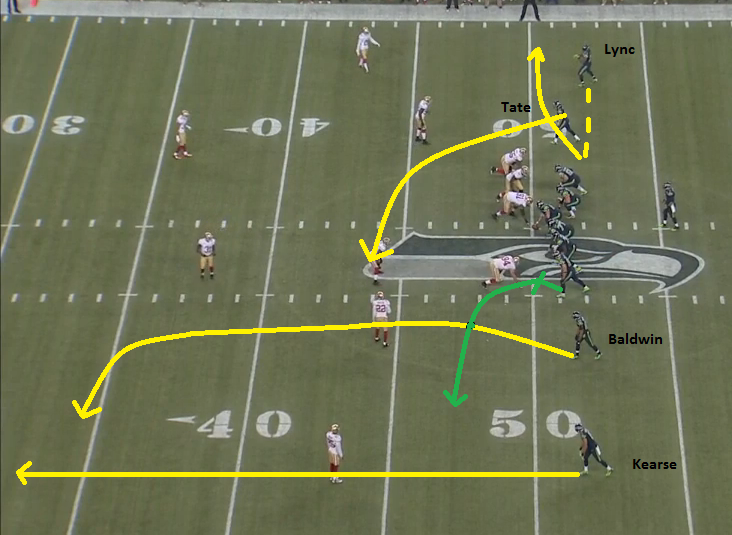 Lynch motioning in and then drifting back out to the flat is a wrinkle on an otherwise standard play. 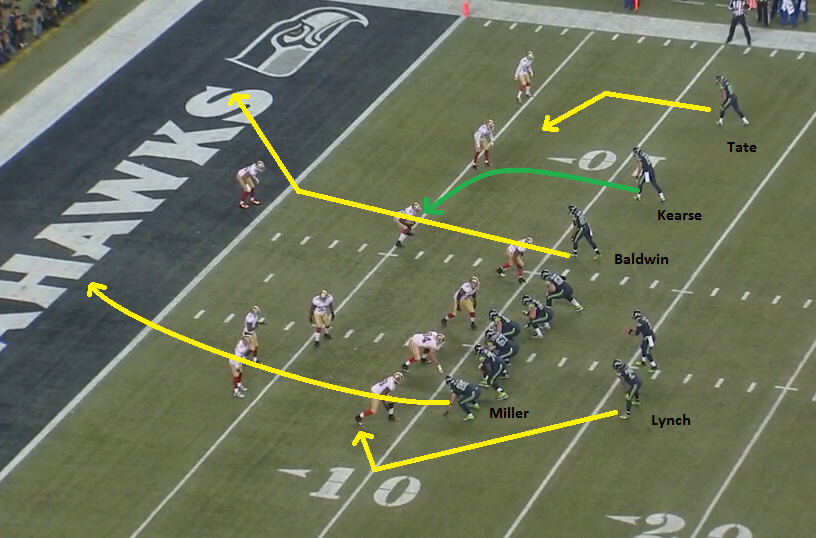 Kearse previewed his Super Bowl touchdown on this play, taking on tacklers and dragging them down to the 1. 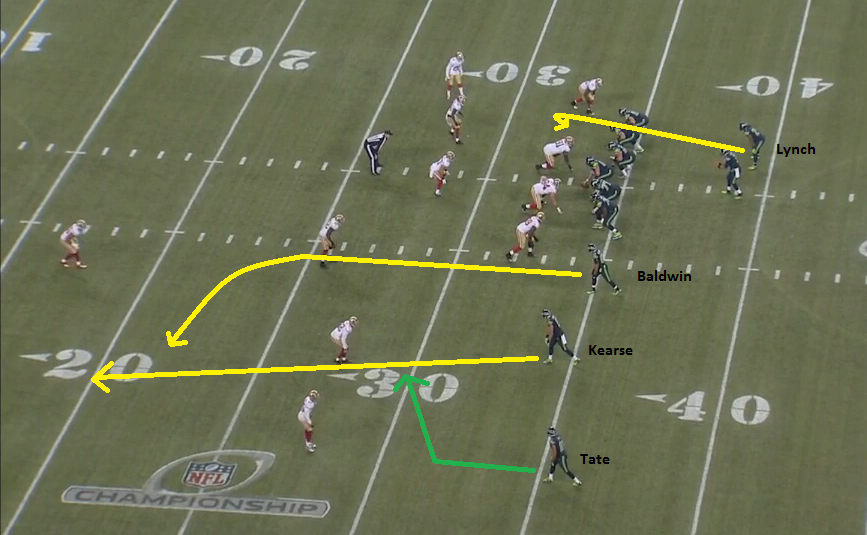 Tate's slant counters off the standard out breaking route Seattle likes to run here. I'm not sure if there is a check that Tate reads or if this is a designed route.

3rd down summary - Seattle pulls out a few little tricks on third down, a different route here or a modified concept there, but there are no drastic differences. They didn't run any screen plays, which is somewhat interesting despite the one game sample size. 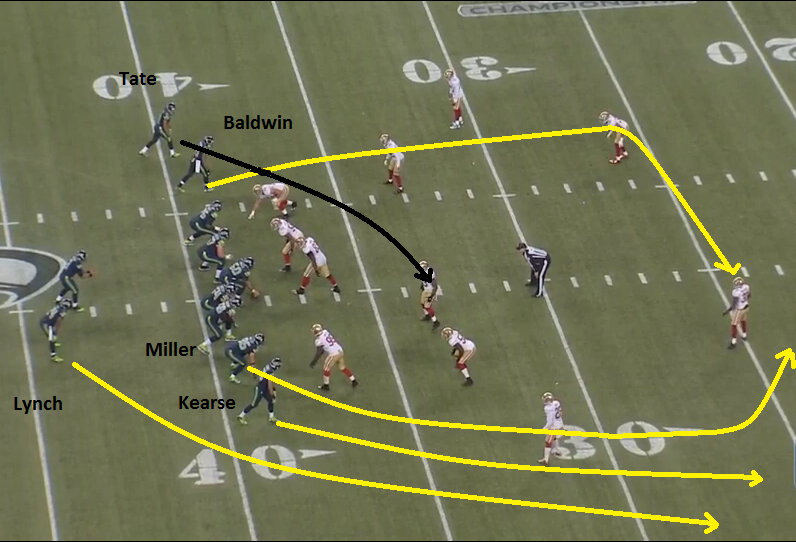 Variations on a theme. This play completely saturates the right side of the field, even Lynch's outlet route is to that side. 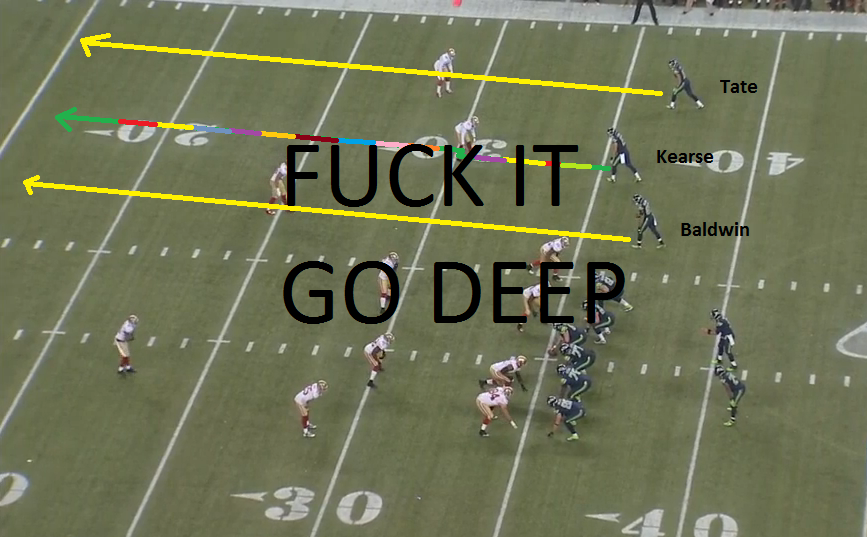 4th down summary - I liked the Everybody Go Deep play.

Overall Summary - All in all, Seattle runs a pretty basic passing attack. They want to get athletes threatening to get behind a defense, and they want athletes running into the space created beneath those deep routes. That's not ground breaking information, but to me it's very interesting to see how simplistic they are sometimes in going about it.

Another not ground breaking piece of information is that Seattle is completely confident in what they do well, and they're not going to adjust much for either their opponent or the game situation. If they think a play can work on 1st and 10, then they believe it will work on 2nd and 5 or 3rd and 15.

This passing game philosophy fits perfectly with the "Win Forever Young" mantra. They've created a system that maximizes athleticism and downplays technical know how, and the simple variations on a single concept allows for newcomers to learn quickly.

It might not be the beautifully orchestrated passing attack that you see from other offenses, but that's kind of the point.