An early look at some of the most interesting players for the 2014 college season and 2015 NFL Draft.

I don’t care what anyone says, it’s never too early to be taking a look at some interesting players due to come eligible before the 2015 NFL Draft.

Before we look at specific players, let me note a couple general observations: whereas 2014 saw zero RB and only 3 DE drafted in the 1st round, next year should see spikes in both. Assuming a few underclass RB declare, 2015 should have an incredible amount of talented RB on the market: Todd Gurley, Melvin Gordon, Mike Davis, Jay Ajayi, Duke Johnson, Kenyan Drake, Byron Marshall, Kenneth Dixon, Tra Carson, Karlos Williams, Ameer Abdullah to name a few.

Even without naming underclassmen, the 2015 DE class will contain: Vic Beasley, Randy Gregory, Cedric Reed (rushed opposite from Jackson Jeffcoat), Trey Flowers (like him a lot), Lorenzo Mauldin (the other half of the Louisville Cardinal dynamic duo with Marcus Smith…like Mauldin a lot), Markus Golden (split time with Kony Ealy and Michael Sam…and Shane Ray at Mizzou), Bud Dupree, Tony Washington, Hau’oli Kikaha. There should be enough depth at both of these positions to find a quality player in the late 1st. Let’s begin at DE. 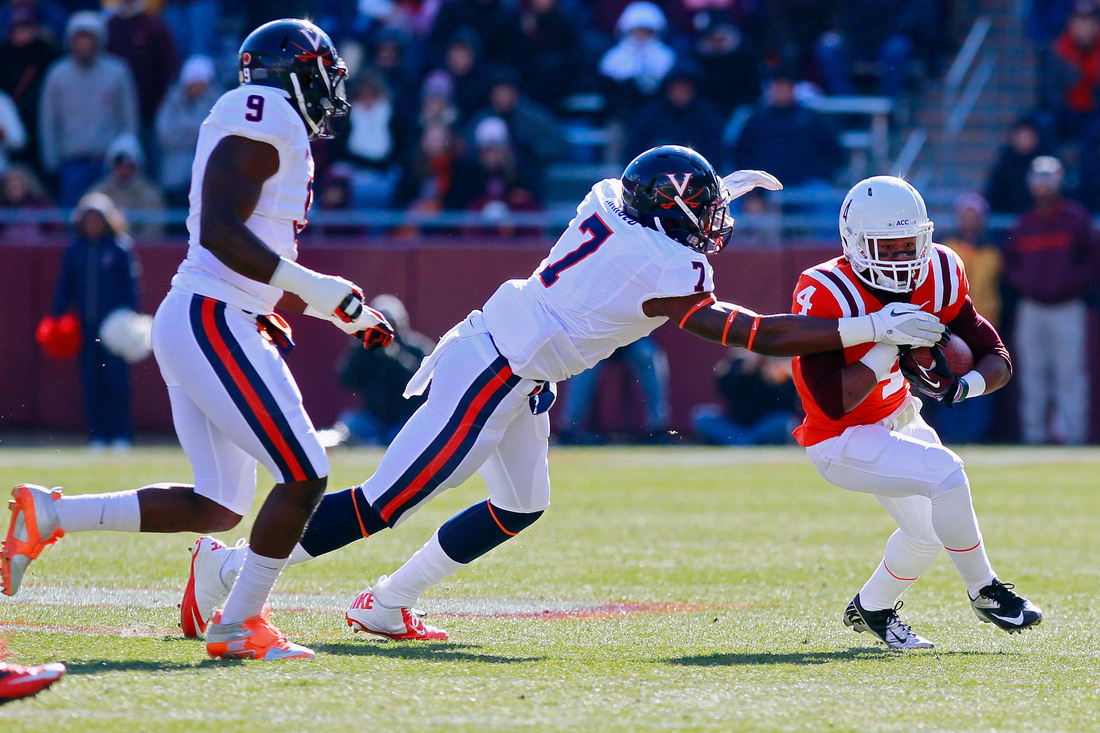 Harold is a freaky athlete that looks SO MUCH like college Bruce Irvin on tape (also great hops on youtube dunking video), and who has a great chance to be the 2015 version of the 2014 Vic Beasley (junior pass-rusher that may not declare).

But right now, my focus is on Alvin "Bud" Dupree. Dupree unofficially checks in at 6’4"/252 and registered 61 tackles, 9.5 TFL, 7 sacks, 1 PBU, 3 QBH, and 2 FF in 2013. In 2012, Bud played more of a true OLB position with some hand-in-the-ground snaps; finishing with 91 tackles, 12.5 TFL, and 6.5 sacks. Having watched much of his tape from last year, I can honestly say he had at least 3 sacks vultured by Za’Darius Smith. Dupree was the guy who got quicker penetration, disrupted the QB into moving out of the pocket, at which time the QB basically ran into Smith (basically, what Cliff Avril was for 2013 Seahawks). It’s also kind of like how a lion pride hunts, but on film, it’s pretty clear that Dupree is the better pass-rusher:

Dupree has some of the best snap-fire I’ve seen so far this offseason. He shows above average speed and ability to dip his hips and turn the edge. Solid production against SEC competition too. I’d like to see Dupree wrap up better on tackles, but there is a lot to build on here for his senior year. Draftscout doesn’t have 2015 players ranked overall yet, but Dupree is currently listed as their 6th-best DE.

When it comes to running backs, we often see more underclassmen declare…so it’s not far-fetched to expect many of the stud junior RB this year will be coming out. I think Melvin Gordon and Todd Gurley get drafted in the 1st round if they declare. A guy that is more of a 1st-2nd round tweener is South Carolina’s Mike Davis. In my study of this RB class, I’ve grown REALLY fond of Davis. I like his game tape, I like his production, I like his measurables, I like his hands, I like his feet, I like his interviews.

At 5’9"/215, Davis is a bit shorter than the average (recent) Seahawk RB, but the 215lbs is probably more important for a smashmouth RB than the 5’9" height. Last year Mike ran for 1183 yards on 203 carries (5.83 YPC) and 11 TD’s in the SEC. He also caught a very healthy 34 passes for 352 yards (10.35 YPR). In the tape below you’ll see his hands on a really nice downfield reception. As is the case with most college RB, Davis’ pass-protection is his biggest shortcoming, and he will occasionally cough up the ball.

He reminds me of somewhere between Doug Martin and Eddie Lacy. And, although some of his explosive runs are impressive, I’m most intrigued by what Davis does in short yardage and/or when he’s simply pushing the pile. His power is unquestionable. With Lynch getting higher in age and lower in contract time remaining, and Turbin being sort of a space-holder as the 3rd-down back with only a year of club control remaining, I would seriously consider spending a late-1st round pick on Mike Davis with plans of letting him compete with Turbin for 3rd down duties. Draftscout has him as their 4th-rated RB for 2016 (semantics…he should declare for 2015).

The Hawks dipped into OT twice in the 2014 draft, added another really promising OT in UDFA, and have returning options at OT in Okung, Bailey, and Bowie. So I'm not expecting an OT to be any kind of priority in 2015. I'm only linking the following tape because I noticed the Penn State LT while looking for footage of Garry Gilliam. Turns out, the LT was a sophomore named Donovan Smith. Also turns out...he's pretty good. This is his game against highly-touted DE Randy Gregory.

Smith owns this matchup in every conceivable way (Smith was less effective against Noah Spence...but that could speak more to the eliticism of Spence than a lack from Smith). I'm now a fan of Donovan with intentions of looking his way in 2016, and Randy Gregory has been dropped down on my list of DE for 2015.

One spot I thought the Seahawks would address in 2014 but didn’t, was finding a guy to train as a future replacement for Brandon Mebane at nose tackle. The rumor is that the Hawks were targeting Wisconsin NT Beau Allen, but he got vultured by the Philadelphia Eagles like three spots before Seattle’s 7th round pick. If they return to looking for a NT in 2015, an early name to watch could be Clemson’s Grady Jarrett.

Jarrett, at 6’1"/295 isn’t exactly in the same mold as Mebane was coming out of Cal in 2007 (6’1"/309), but his game is very similar to 2014 draftpick Timmy Jernigan of FSU/Baltimore Ravens (6’2"/299). For an undersized NT, Jarrett stacks up larger OL very well. With his lower center of gravity, he gets under OL and then drives them into the backfield. When he’s not driving OL back into the pocket, Jarrett also does nicely shedding blocks to make stops on run plays.

Jarrett is currently draftscout’s #5 DT, which I would approximate to an early 2nd round value. Ahead of him are three names I wholeheartedly agree with, and one I haven’t watched: #4 Brandon Ivory (getting the ‘Bama Bump), #3 Danny Shelton (a true NT from UW), #2 Carl Davis (a nice-looking 6’4"/315 player that could play NT, 1T, or 3T in Seattle scheme), and #1 Michael Bennett.

The Ohio State version of Michael Bennett is a player I first documented in the Gems from October 2nd, 2013. He caught my eye while watching some Ryan Shazier tape, and then I watched some of his interview footage…the guy is a stud. He’s not quite on Aaron Donald level at the 3-Tech, but he’s damn good. Last year he posted 42 tackles, 11.5 TFL, 7.0 sacks, and 3 FF while playing at 6’3"/285.

I’m not sure where MB63 would fit on the Hawks with MB72 locked up for a few more years, and Cassius Marsh expected to bulk up and play similar role(s) as Mosesbread, but if there was a guy they’d want to play a role similar to the one vacated by the departure of 6’2"/283 Clinton McDonald, MB63 would be choice. But MB63 will also (likely) be unavailable by the time Seattle drafts.

More likely to be available late in round 1 could be Auburn DT Gabe Wright. 6’3"/296 Wright has a nice 2013 to build from (8.5 TFL, 3 sacks, 8 QBH) if he can improve his conditioning and become a player that consistently does this:

At some of the skill positions:

I’ve yet to find much depth at TE going into 2015 draft. I’ve seen glimpses of high upside from Penn State’s Jesse James (6’7"/257), but he’ll only be a junior. Nick O’Leary has great hands and has been a tremendous redzone talent for FSU, but he’s 6’3"/248 and more of an H-Back. So I drop down to draftscout’s #7 TE prospect to find one that I really like: Ohio State’s Jeff Heuerman. 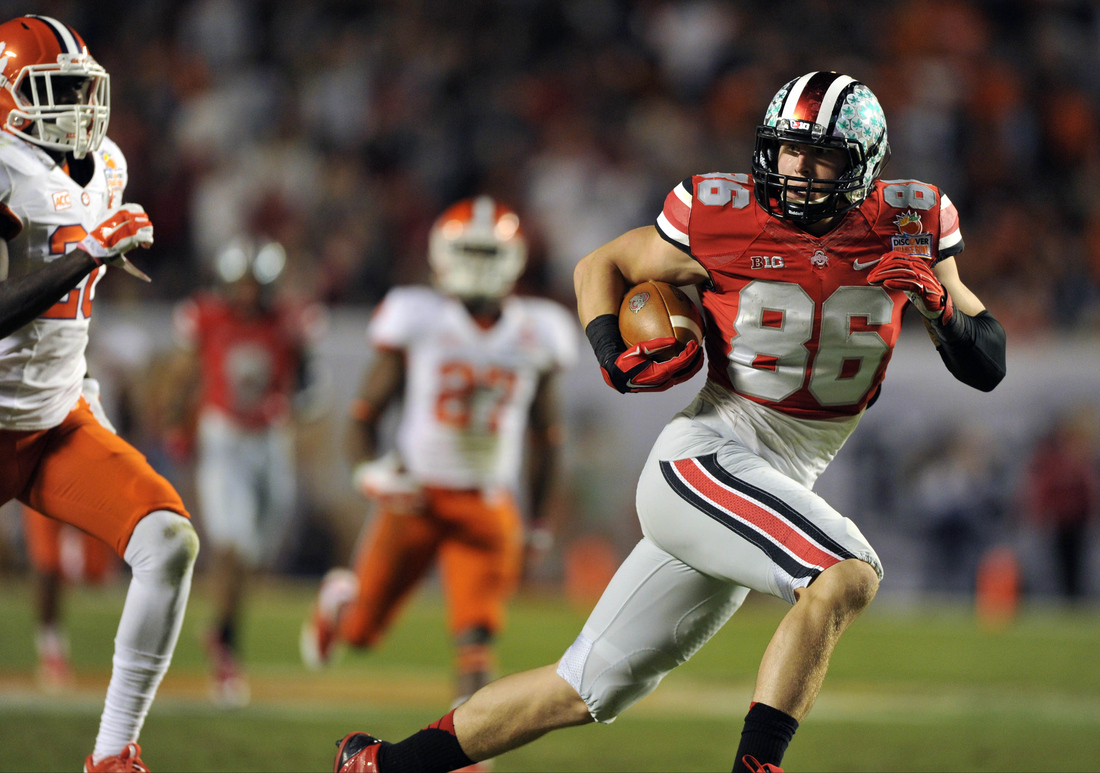 I have no reason to keep going back to Ohio State, but that is where my eyes are seeing the talent. And after going 24-2 the last two years, it makes sense to find a lot of talent on their roster. So apologies to any Michigan/Seahawk fans reading this.

Anyways…Heuerman…6’6"/252 (pretty much ideal TE measurements) and recorded 26 catches for 466 yards and 4 TD’s in 2013. More impressively, his YPC average of 17.92 would have ranked 22nd in the country among all receivers for YPC; if he had enough catches to qualify. That same YPC would have made him 1st amongst TE (a full yard per catch more than Nick O’Leary’s 16.88 and 2.23 YPC more than Eric Ebron). So there’s that.

Then there’s this…owning the seam route:

Busted coverage for the score:

There’s not a lot of tape on Heuerman individually so I can’t speak much to his blocking ability, but I’d like to assume that on a team that ran the ball like 63% of the time, their TE was (at least) decent in run-blocking. Pass-pro; still TBD.

2015, of course, will see a dip down in the talent available at WR, but as a team that has 5 WR locked up for the next 2-3 years, Seattle can probably wait till day 3 of 2015 to even sniff at a WR. Early favorites that are pretty well known: Devante Parker and Antwan Goodley from the senior class; Dorial Green-Beckham, Jaelen Strong, Deontay Greenberry from the juniors.

Sammie Coates of Auburn is ranked 7th in the junior class, but I think that’s crazy. He’s everything Nuk Hopkins was two drafts ago, except Coates is probably faster. Only reason he may rank that low now is that he plays in a higher run-volume system than Nuk (Auburn ran on 72% of its plays in 2013…Clemson ran on 55% of its plays in 2012). Coates ranked outside of the top 100 receivers in 2013 for catches, but he managed to finish 65th in receiving yards (902) thanks to his sizzling 21.48 YPC (3rd in the country). Definitely one to watch for a 2015 early declare.

One thing that I will be curious to watch for in the 2015-2016 WR class(es) will be how receivers that lost their QB to the draft earlier this month will maintain their production going forward with a new QB. This applies to Parker, this applies to a couple nice WR from UCF that I like (Rannell Hall and Breshad Perriman), and this applies, to a lesser-known extent, to Shavarez Smith from South Alabama.

In 2013, USA was quarterbacked by a guy named Ross Metheny. Metheny was a transfer from Virginia who (as far as I can tell) never got picked up by an NFL team, but while at USA he ranked 38th in the country in passer rating (ahead of names like Brett Smith, Jordan Lynch, and Tom Savage), completing 62% of his passes with a YPA of 8.1 (27th in the country). Tied for the Jaguars’ team lead in catching Metheny’s passes was Shavarez Smith.

Smith needs to work on reducing the frequency of body-catches he makes. But so did Kearse coming out of UW. More importantly, I like Smith’s shake coming off the line, I like his strength after the catch, and I like how well he plays the redline.

Shavarez Smith…officially the first sleeper of the 2014/2015 season of Gems.