Draftbreakdown.com has been popping in the last week or so with new cutups of players that immediately jumped off the screen for me, so I wanted to put together another offseason Gems.

It’s obviously early to have any kind of grasp on Seahawk team draft needs for 2015, and as a result I’ll just bounce around from position group to position group.

In the 2014 season debut of the Gems I mentioned Auburn DT Gabe Wright and left a link of one of the plays from his game against Ole Miss. Interestingly, at the time of that May 30th publishing, nfldraftscout.com listed their top DT’s for 2015 as: 1-Michael Bennett, 2-Carl Davis, 3-Danny Shelton, 4-Brandon Ivory, 5-Grady Jarrett. After my mention of Wright; 10 days later (with no new game tape to alter one’s opinion of him) and the list now goes: 1-Michael Bennett, 2-Carl Davis, 3-Danny Shelton, 4-Gabe Wright. 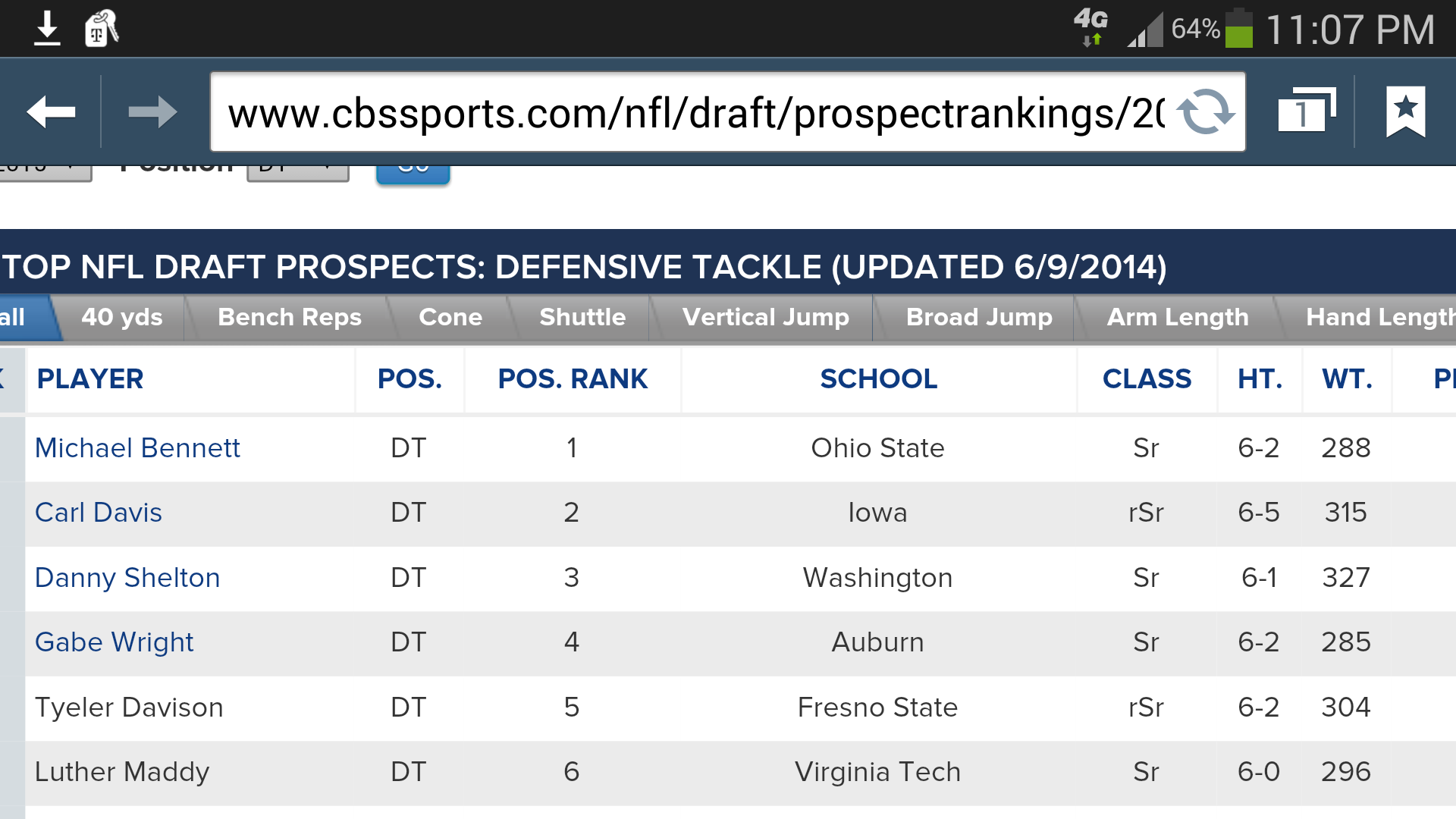 So that’s interesting. Here is the full-game cutup of Wright vs Ole Miss:

I can’t recall the last time I saw a DT with a punch as strong as Gabe’s. I mean those OG’s heads are snapping back like whiplash every other play. The word on Wright from Auburn spring practice is that he’s looking to cut body fat. If he can tone up from his current listing of 6’3"/296, swapping maybe 15lbs of bad weight for good…he’s gonna be a dangerous interior pass-rusher.

Also on the DL, I had to give a plug to our own Magnus Bendixen’s draftbreakdown cutup of Oklahoma’s junior DE/DT Charles Tapper. I hadn’t heard of him before watching this video, and if you asked me before I watched it if I knew who Charles Tapper was, I might have answered, "isn’t he a Whitehouse Correspondent for some news network??" (And if you combined Chuck Todd and Jake Tapper, you’d actually be close.) But this Tapper is a (listed) 6’4"/261 DE that appears to have the strength of a DT playing on the edge. More importantly…I just want people to watch Chuckroast come from outside the near hash, and chase down Bama’s WR Amari Cooper 50 yards down the field in the second play of the tape:

I honestly don’t remember, or care, what is on the rest of that cutup. The effort and athleticism Tapper shows on that play alone has him on my radar and SPARQ watch-list for 2016. (Sidenote: Tapper did have 9 TFL and 5.5 sacks in 2013…but 4 of the sacks came against TCU and Kansas combined.)

Another player mentioned in my May 30th piece was Ohio State TE Jeff Heuerman…here is a video of two of his 2013 games. In one game he looks like a nice receiving TE needing to work on his blocking, in the other game he blocks really well and looks to need improvement on pass-catching. Regardless, he has been voted a team captain and Urban Meyer sounds set on using his TE more in 2014. Arrows could/should be pointing up on this one:

At WR, I don’t really see Seattle needing to go WR again very early next year, and there are aspects of this tape that scream to me "not a Seahawk", so this guy is probably someone else’s early round pick, but he’s a fun watch. Houston’s Deontay Greenberry…6’1"/198 and caught 82 passes for 1202 yards and 11 TD in 2013. His redzone work, with his hand-snatching TD grabs, is gorgeous:

Greenberry is draftscout's #7 WR for 2016 (he is another Junior this year).

This next guy is my favorite tape for today. I had never heard of this player before a few days ago. He’s actually only coming into his junior season and may not declare this year, but I watched this tape simply as part of due diligence and I liked it so much I wanted to get his name out there.

This is Taveze Calhoun of Mississippi State, a school that has had a nice recent history of developing CB (Johnthan Banks and Darius Slay). His tape is every bit LOB. I can’t tell what I like best: his burst to close on runners/placekicker, the hits he lays on the QB on a keeper and WR after the catch, or the way he wraps up and brings down the Ole Miss 6’5"/294lb DT Robert Nkemdiche when he takes snaps at RB. I like them all:

Draftscout has 46 corners ranked for 2015…another 48 for 2016…Calhoun is not amongst them (tick-tock, tick-tock…matter of time).