In my breakdown of the NFC Championship Game passing concepts, there were some comments about how the Super Bowl game plan seemed different. That passes seemed to be getting out quicker and receivers were running shorter routes. Was this because of Percy, was this our imagination?

I feel pretty confident saying that this was not simply our imagination. In the first quarter especially, Seattle was running plays that looked significantly different than those they ran against the Niners two weeks earlier. Seattle ran 6 plays in the first quarter that did not have a deep option, and another from the Denver 15 where all routes broke within 5 yards of the line of scrimmage (a bit of an aberration, even for the red zone).

Was this because of Percy? Somewhat. Not surprisingly, Seattle has designed a lot of plays to get Percy moving horizontally underneath the defense. This manifests itself in extra screens, but also in outlet type routes that are much more enticing.

The bigger factor in Seattle's quicker passing game, to me, was that Denver ran a lot of Cover 3 and Cover 4. Denver was well prepared for the Sex Cannon and seemed to make a point of staying over the top of Seattle's receivers. The Niners, on the other hand, ran a little more man coverage with a single safety in the middle of the field. Their corners were also more aggressive in trying to jump routes. With the pressure they were getting it's hard to blame them.

Before were begin, here's how this works. Plays are sorted strictly chronologically (no sorting by downs this time). The different lines are described below: 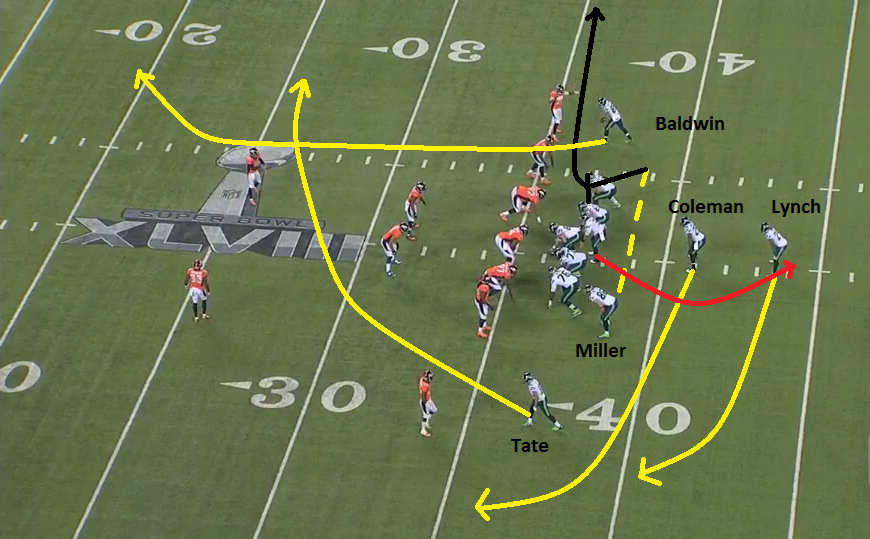 Hey there, bootleg zone flood. The game starts off right where the Niners game left off, but we won't see a lot more of this over the next few plays. 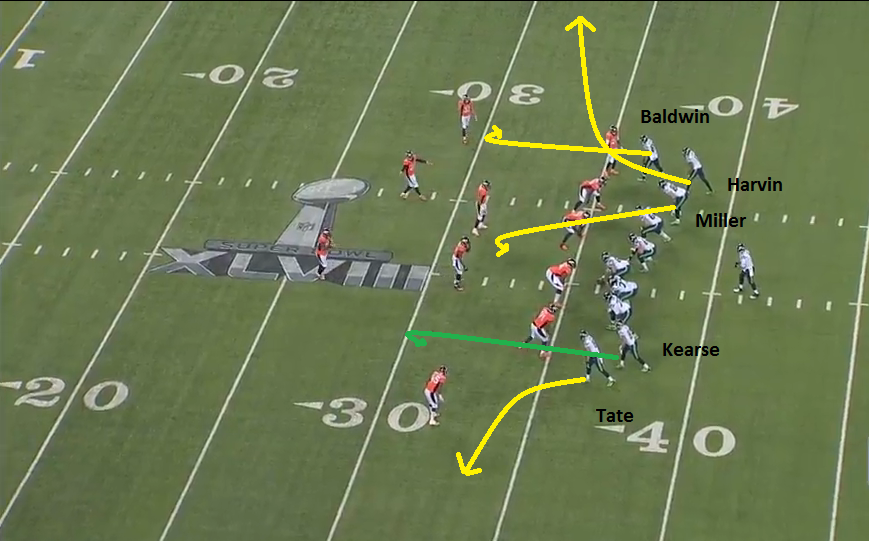 Here we see a big change from the previous game. Zero routes going more than 5 yards down field. Outside of screen plays, Seattle didn't run a single play against SF where that was true. 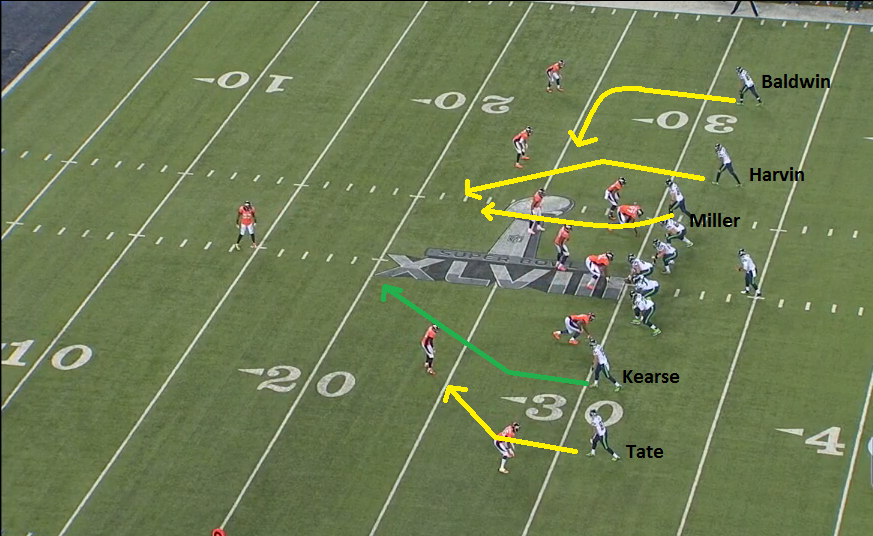 Again, all quick hitting routes. Miller might have been expected to stretch the seam, but he and Harvin don't space their routes properly and get tangled up on each other. 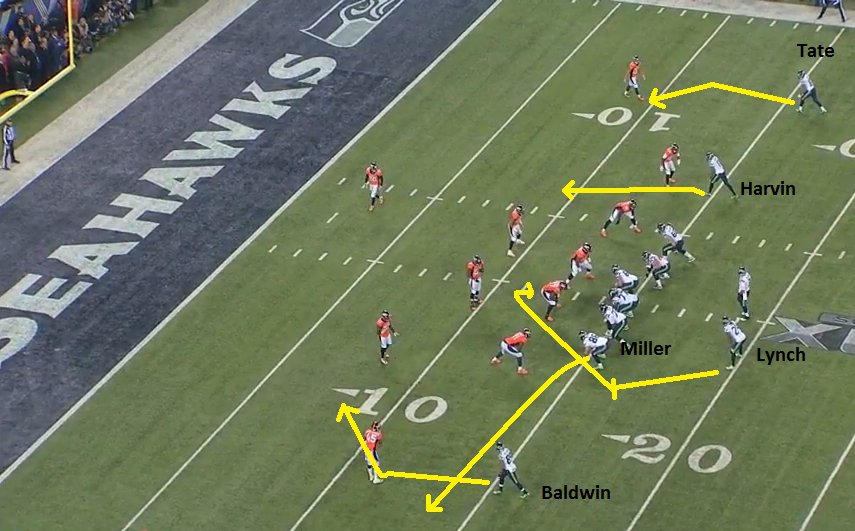 Even from the 15, this play is a change from what we've seen in terms of depth of routes. Generally you see Seattle running at least a skinny post into the endzone from the TE or the slot. Russ' reads the safety over Miller, who is coming down on the play, then to Harvin who is pinched by the nickel corner and the MLB. Tate is open, but Russ gets there too late and is forced to scramble. 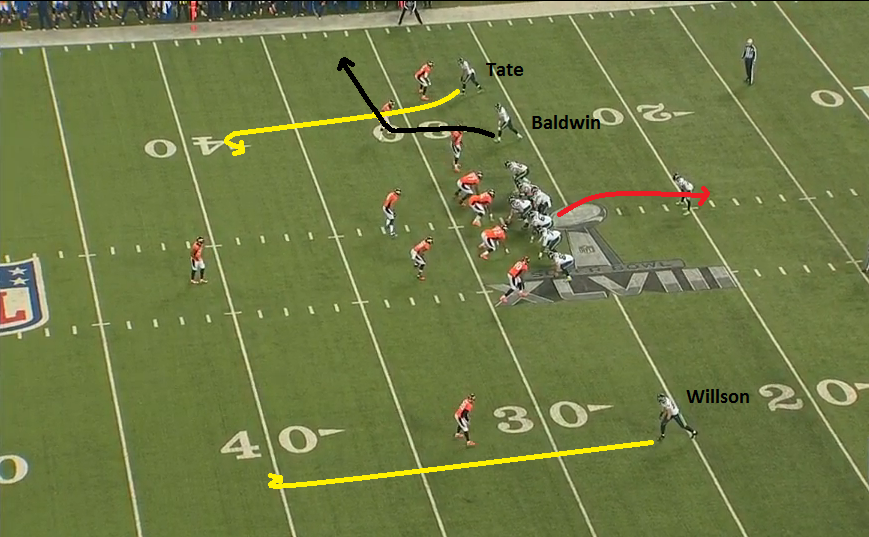 I'm still suspicious that these curls are checks for the receivers, but it's hard to pinpoint what that check might be. Denver was playing single high with press coverage on Tate, and off coverage on Willson. 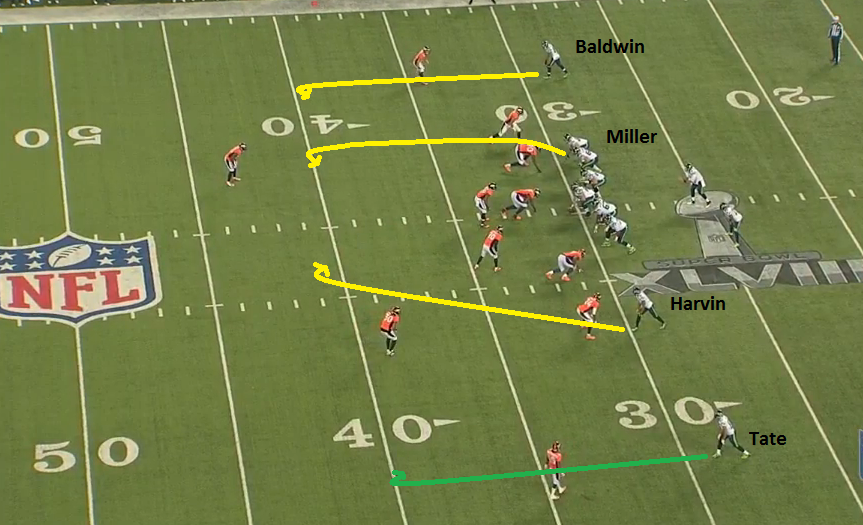 Denver runs Cover 4 with off coverage, Seattle runs all curls. 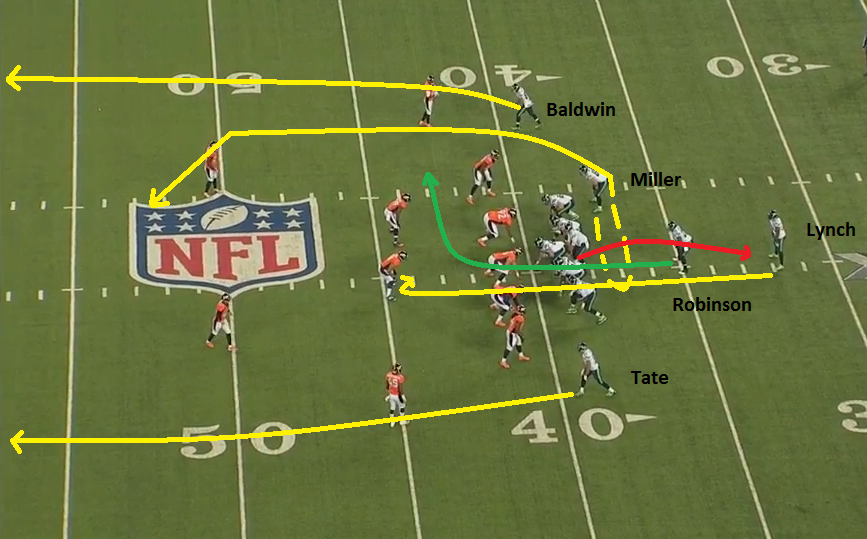 There's the Seahawk passing game I know and sometimes love and sometimes yell at. Denver's running Cover 4 and covers this up pretty well, forcing a dump off to MRob. Robinson slips a tackle though and ends up picking up some decent yardage. 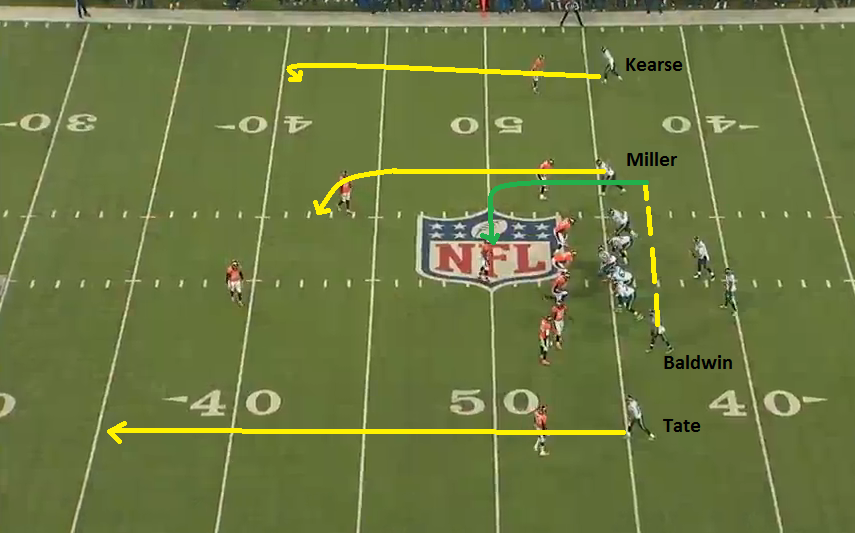 Denver brings 6 with a Cover 3 shell over the top, so Wilson takes the easy short pass. 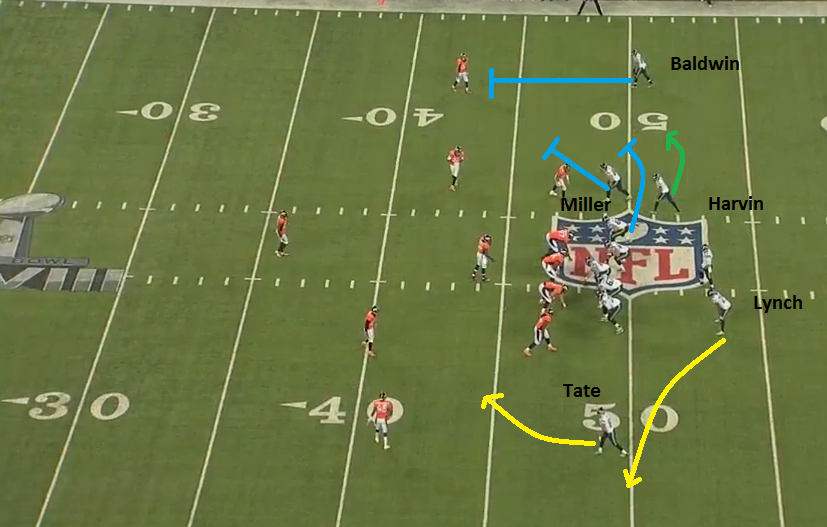 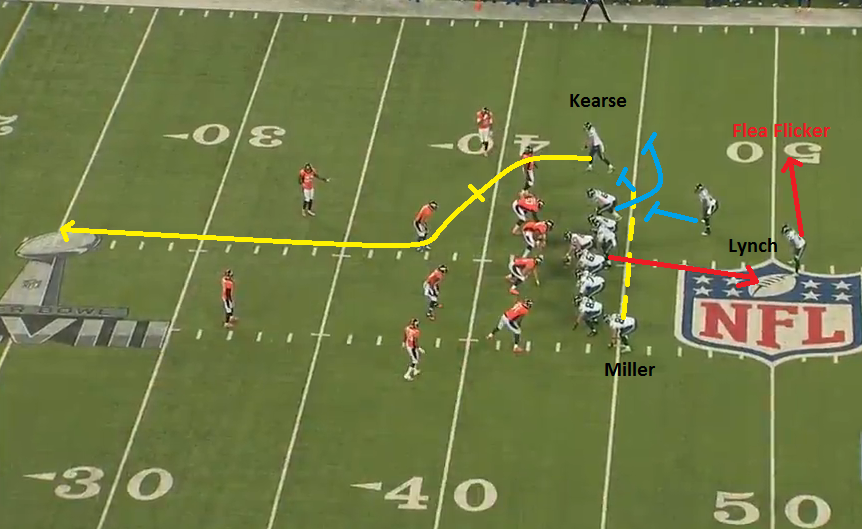 Denver, again, stays over the top of this really well and kills the play. Their dedication to not letting Seattle behind them was impressive. It's too bad they didn't do anything else well in this game.

This marks the end of the short passing plays for Seattle, as they start to transition back to the game plan we saw against San Francisco. I wonder how much of the play calling that we saw up to this point was to set up this play. 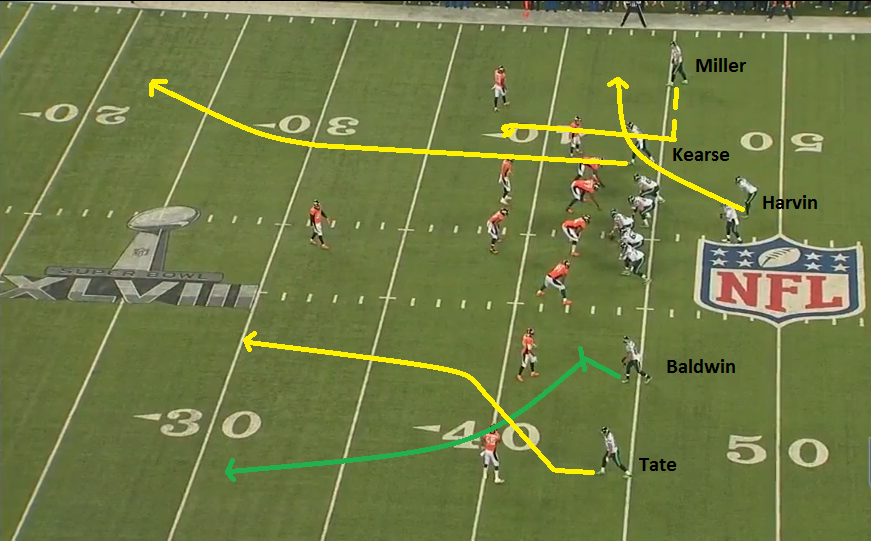 Seattle pulls off a rub route with devastating effect on this play. It looks to me like Denver is in Cover 3, but the deep zone responsibilities on Seattle's left gets dropped. Baldwin moves inside and fakes like he's blocking, so the outside corner sticks to Tate. The nickel corner becomes responsible for staying over the top of Baldwin, but he's picked by Tate, leaving Baldwin to run free.

Also note, Harvin lined up in the backfield. 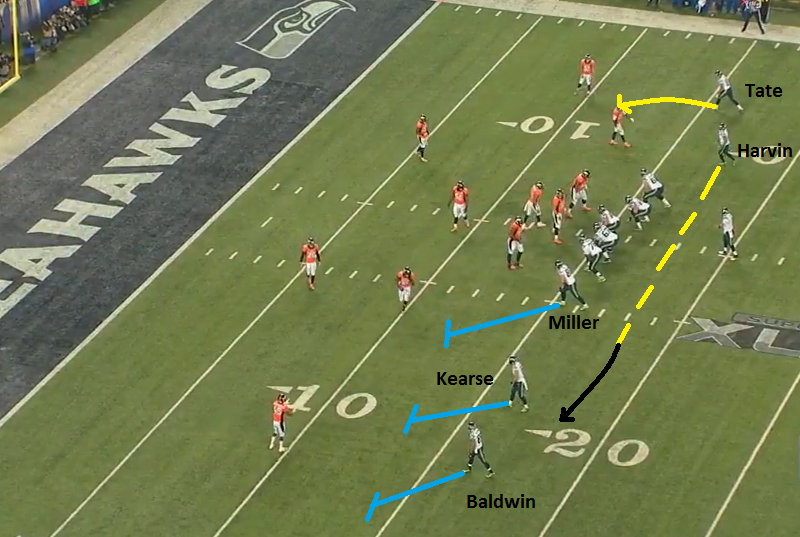 Percy screen, but it's dropped. He nearly dropped the one before this too. Gotta catch those, Percy.

Cool play design, though. Percy has ungodly speed and giving him a running start from motion is just unfair. 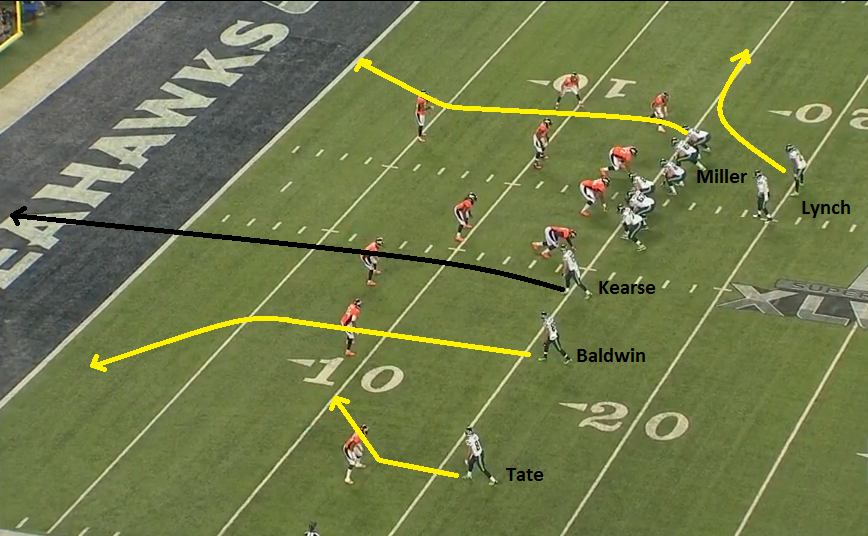 Another play from the 15 and you can see that Seattle is much more aggressive in attacking the end zone on this play compared to the previous one.

Kearse probably, maybe, should've caught this ball. High points it well, but the defender is directly underneath him and Kearse isn't able to bring it down. "Can't miss opportunities like that against an offense like Denvers!" is something I probably said at the time. 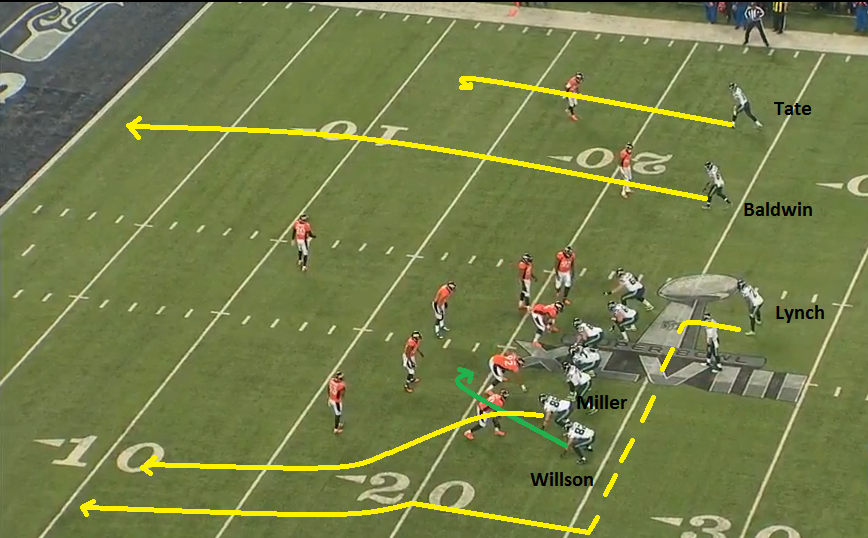 Seattle is trying to take shots now but Denver is just doing a good job staying over the top. Wilson responds by taking what he's given, picking up an easy few yards. 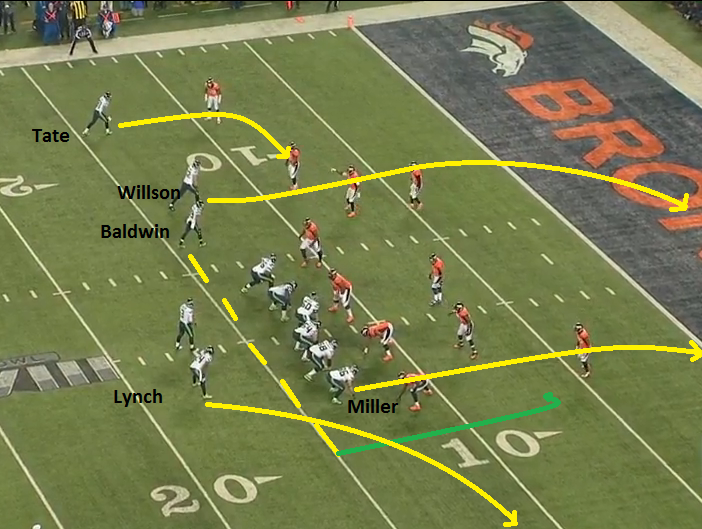 This play is basically identical to the one Doug would score a touchdown on late in the game. He even throws the same juke move on this play, but Denver is able to wrap up. 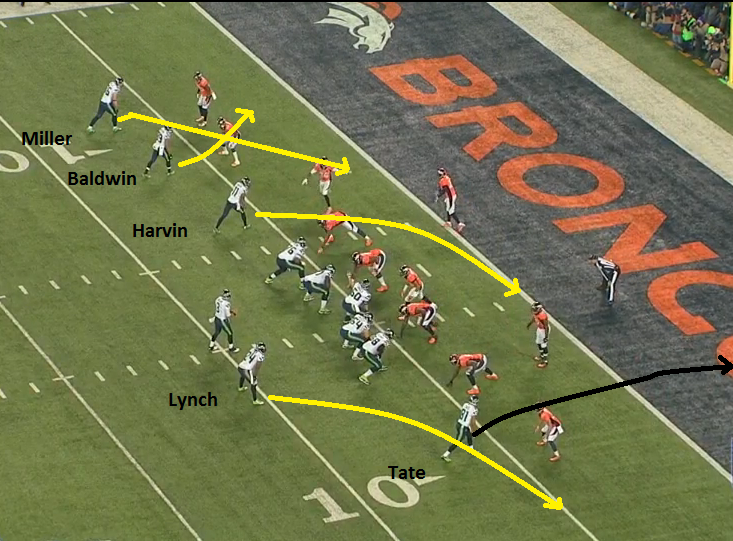 Denver has this play covered up well. Tate looked for a second like he might come free, and Wilson locks on to him. Wilson safely gives Tate a chance at the ball, something he's really excellent at, but it's basically a throw away in the end. 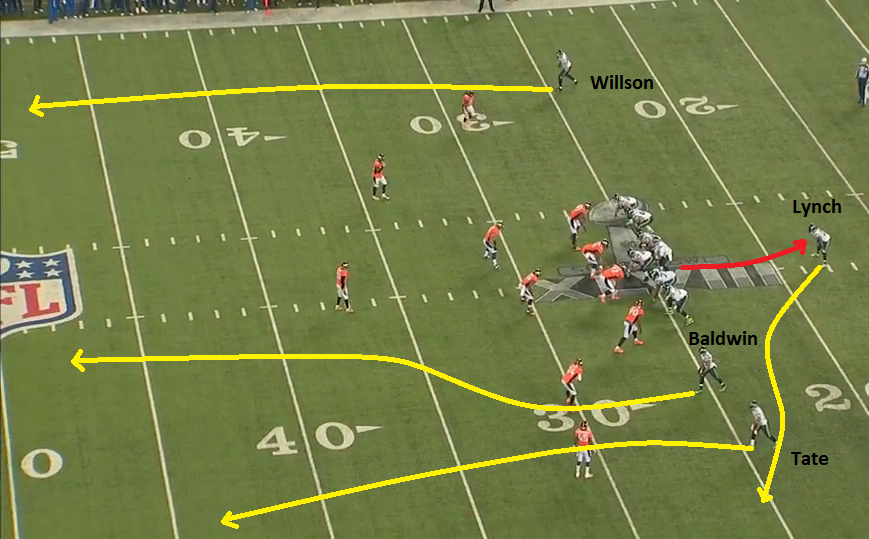 It took half the game, but we finally have an Everybody Go Deep play. Sadly, this play was called back on a hold after Russell scrambled for 22. 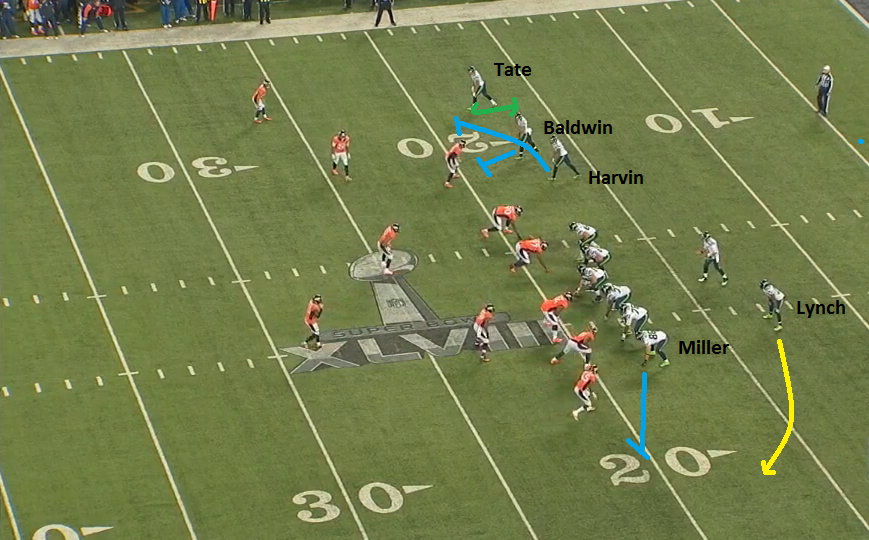 Sneaky little screen play here that at first glance looked like it may have been for Percy, but instead goes to Tate. 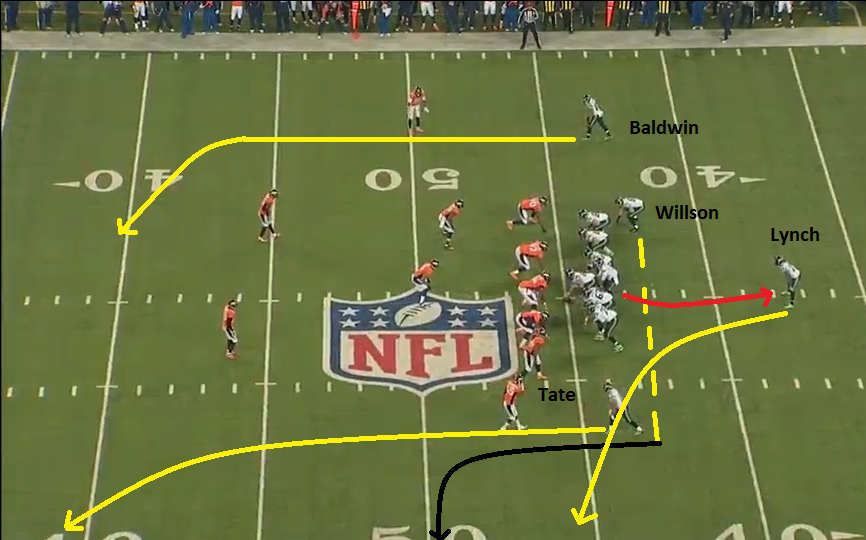 Denver stays over the top, and Willson flat drops a wide open pass. No one cares, because this game is now a party. 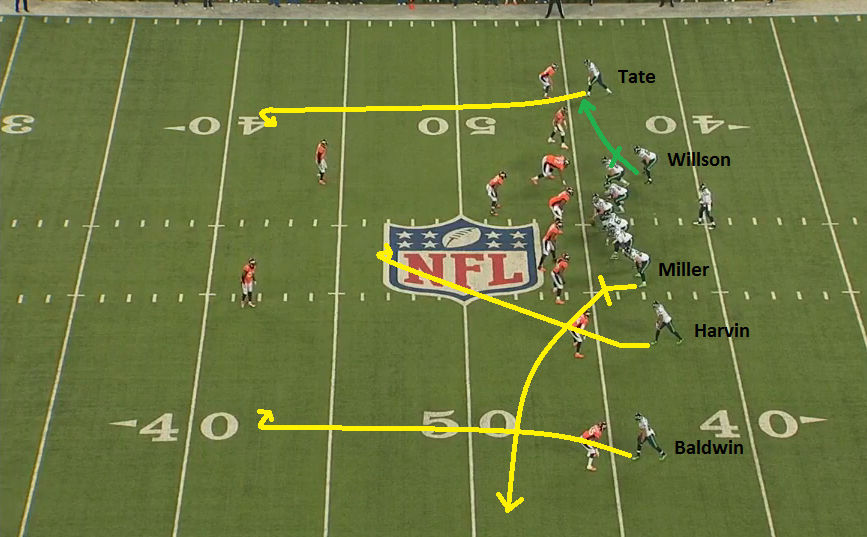 Seattle has a lot of success when their receivers fake a block or chip before releasing into their route. Denver forgets about Willson on this play, and he rumbles for a first down. 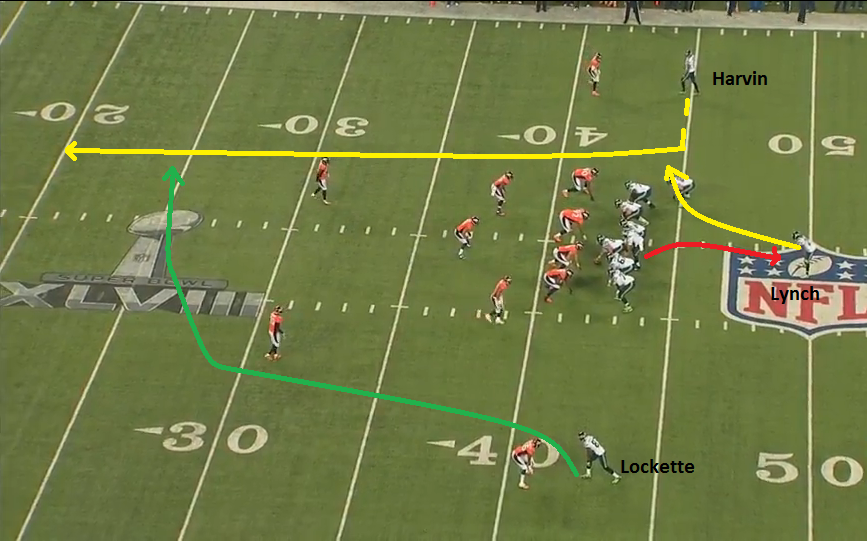 Denver has good coverage on this play, but Lockette has enough time to work all the way across the field and use his straight line speed to separate from his defender. 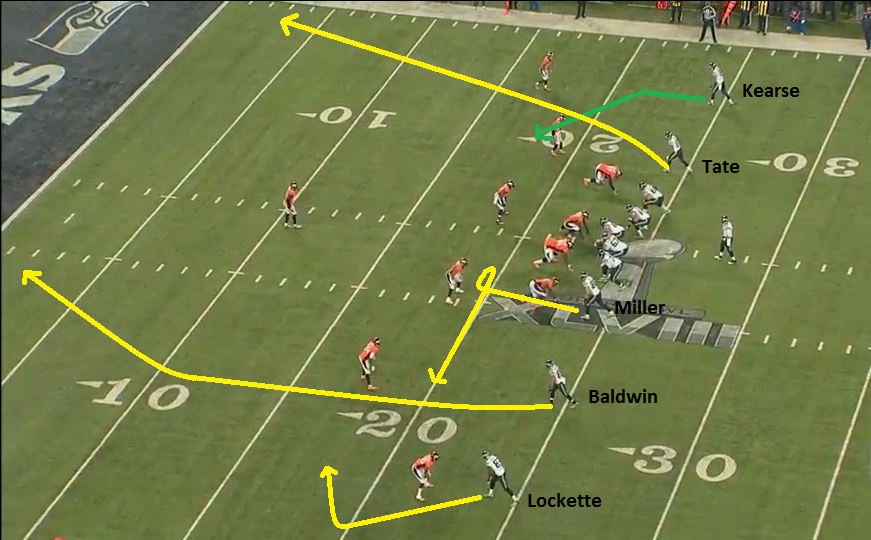 Play is pretty standard, everything Kearse does after the catch is not. 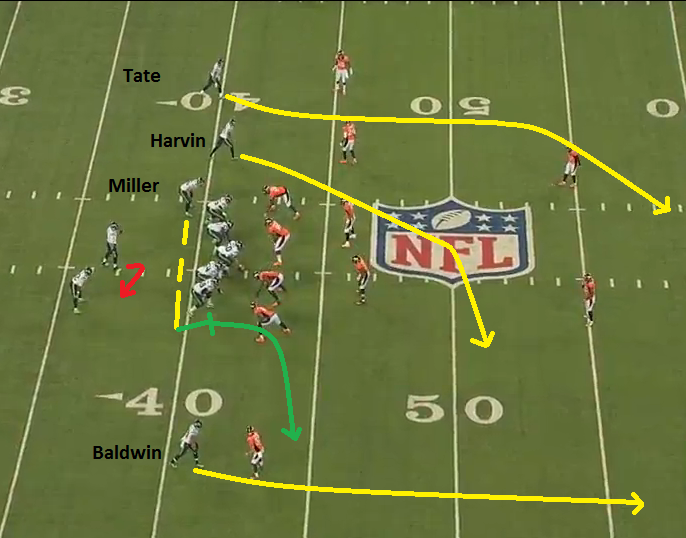 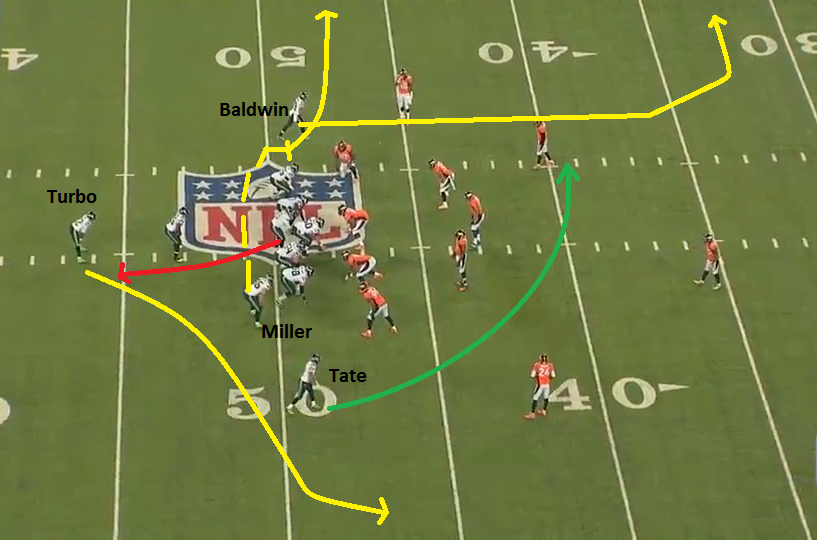 I'm not sure what route Baldwin's running, but it's kind of cool. Breaks like a corner, but then he cuts hard to the sideline. 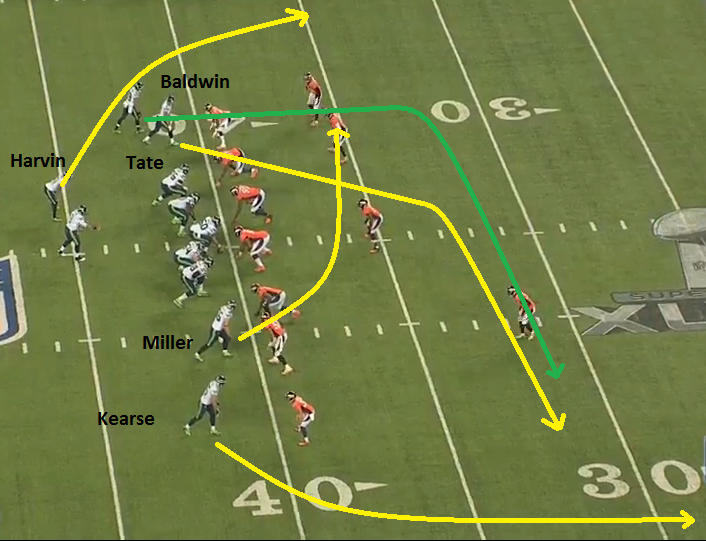 Harvin in the back field! 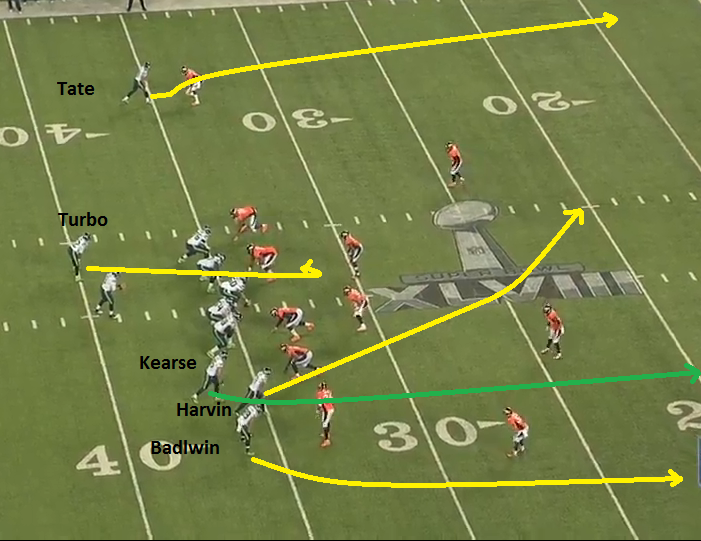 This is one of my favorite plays in Madden, except I like to run my running back out into space below the three verts. 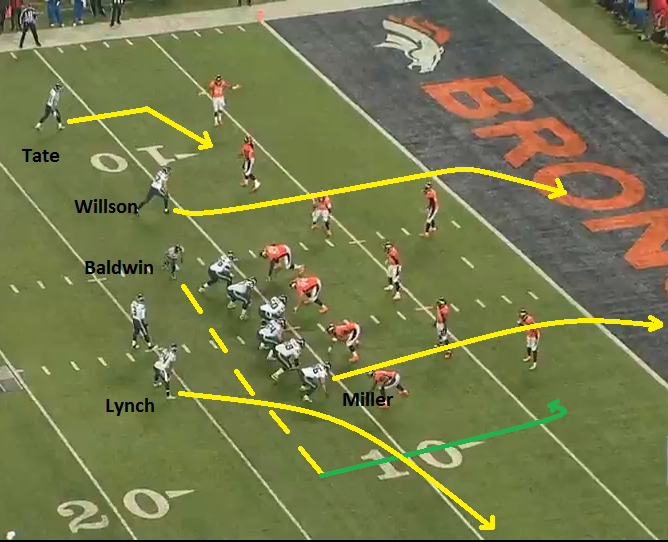 Go back and look at the first play of the second quarter. Tate's running more of a slant here compared to more of an in earlier, but this is the exact same play. 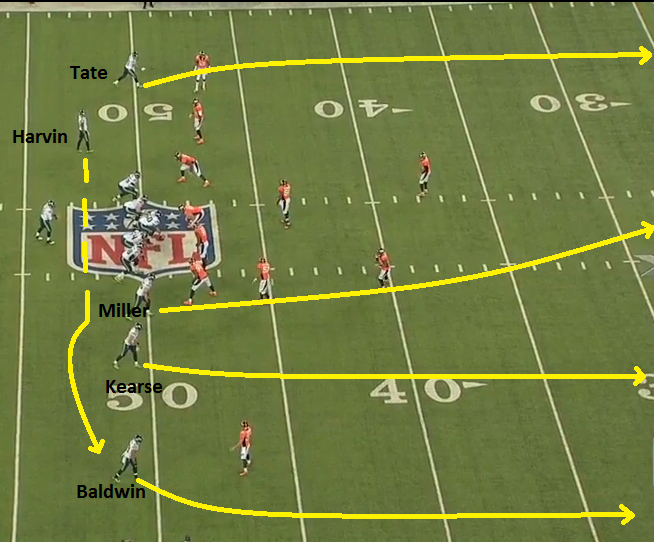 Seattle is up by a million points, they send everybody deep, and when it doesn't work Russell reals off a 16 yard scramble and then runs out of bounds to stop the clock. 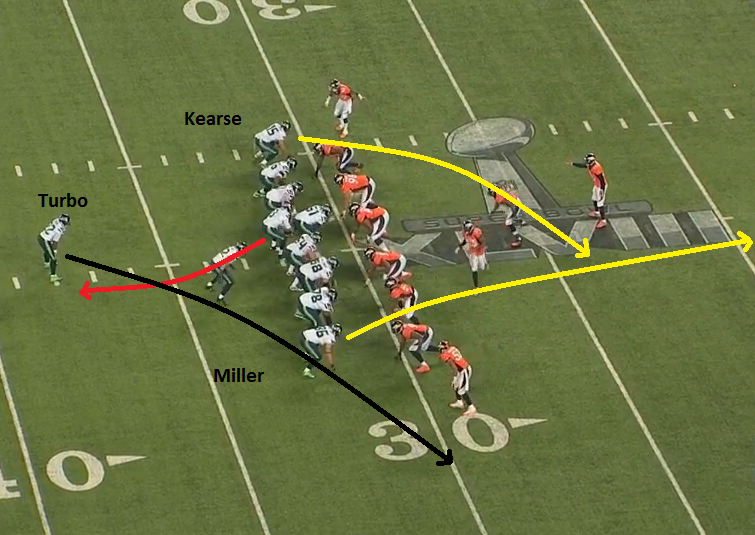 This play is a disaster with Kearse and Miller running into each other, and Turbo barely working his way of out the backfield before Wilson is forced to throw. 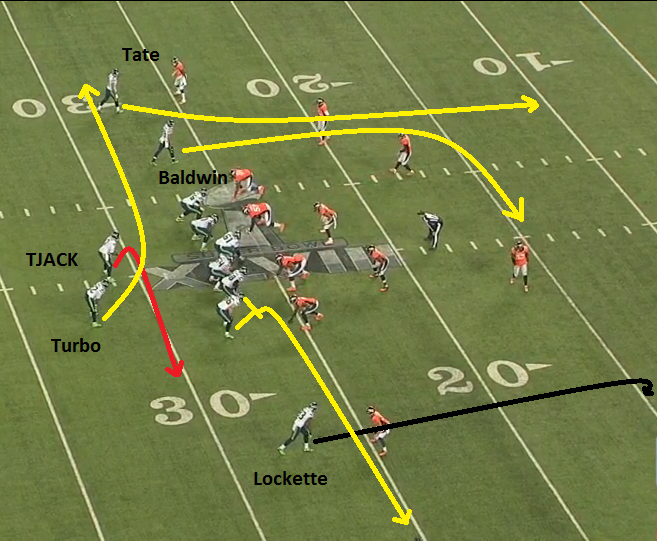 I really wanted him to complete a pass.

Well, there you have it. After a brief experiment with short passing, which may or may not have been to set up a flea flicker, Seattle got back to their standard stuff. Lots of sail concepts, lots of play action, and all kinds of fun stuff for Percy. Denver's dedication to keeping the play in front of them lead Seattle to hit the quicker routes with greater frequency, but they still looked to take their shots where they could.