Taking a look at some Seahawk schemin'.

Here's Volume-II of a series of short Xs and Os posts breaking down some things I see while re-watching the Seahawks 2013 Super Bowl Team of Destiny Season™. Volume-I dealt with 'scat protection', and today I take a look at something you see the Seahawks run quite a bit - a zone flood route concept off a bootleg fake. Against Jacksonville, they used it three times and it worked like a charm on every one.

Without getting too jargony, because I'm not an expert at jargon in the first place, the way the Seahawks ran this play was similar (but different) to what's known as a "sail route" combination. The sail route combo is very popular against cover-3 defenses and is characterized by 1) the outside receiver running a go-route (9-route) up the sideline, 2) the tight end or slot receiver running flag route (7-route), and 3), the fullback or tight end running a flat route, all to the same side. The idea is that the go-route will steal the attention of the outside corner up the sideline, and the strong safety in the box (picture Kam), will either have "curl-to-flat" on that side or deepen with the tight end running the flag route. The QB then just looks keys on the strongside safety. If he goes deep with the corner, dump it underneath to the flat route. If he bites on that route, throw it to the flag route.

The sail route combo is popular because it attacks two defenders (corner and strong-side safety) on one side of the field with three receivers. That's also known as a zone flood. Because Pete Carroll et al know that Gus Bradley likes him some cover-3 defense, they game-planned this concept into their offense in Week 3. They used heavy play action with this concept, though, and this made it even more deadly. Let's take a look-see.

Below, you can Seattle in their 21 personnel with two running backs and a tight end. You can see the routes: Stephen Williams (remember him?) runs the 'go', Luke Willson is the de facto 'flat route', while Sidney Rice is the de-facto flag route. It's different than a true 'sail route combo', I guess, but it accomplishes the same thing. Russell Wilson's read is that strongside safety, rookie Jonathan Cyprien, standing on the 15 yard line in the slot to start. 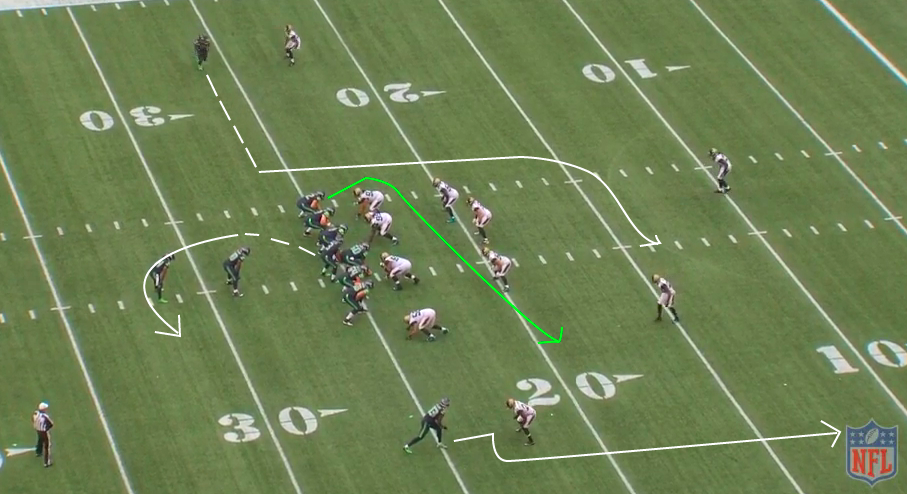 Here's why play-action is a nice lil' addition to this concept.

Cyprien bites on the playaction fake, which means it's now three receivers against one defender. Adding to the numbers game, Wilson could run it as well, so, in actuality, it's like, four against one on the strong-side of the field here, especially because the play-side defensive end bites on play-action. If Cyprien had read the play from the start, he'd likely have taken Willson on the flat route, meaning Sidney Rice would have been the read, underneath the single high safety. That's a tough throw, but something we've see Wilson attempt to his big receiver.

(Example from the week before):

Here, the deep safety reads the Sidney Rice flag route from the opposite side of the field and covers that well enough, so Wilson calmly dumps it off to Luke Willson, all 6'5, 250 pounds of 4.51 speed of him, and the rookie picks up 15 yards. Easy peasy.

This next play worked like a charm but then Golden Tate screwed it up at the end. Regardless, the scheme worked as it was designed.

Seattle is backed up into their own end but have a first and ten. Here, they're in 12 personnel, or two tight ends and one back, which helps to disguise their intentions to run essentially the same play as the one in the first quarter. Remember how I said Seattle runs a lot of the 'same plays' but from different personnel groupings and formations? This is a good example of that.

Sidney Rice runs a deep post. Zach Miller runs the 'sail route,' the route that Sidney runs in the two plays above, but this time from a three-point stance as the Y tight end. Luke Willson, who motioned over prior to the snap from just behind Miller, does a little fake-block pivot thing and runs the flat route. Golden Tate, again, with the go-route up the sideline to vacate the corner. The other slight difference with this play is that the Seahawks attack the weakside of the defensive formation, with Russell Wilson keying the weakside linebacker. 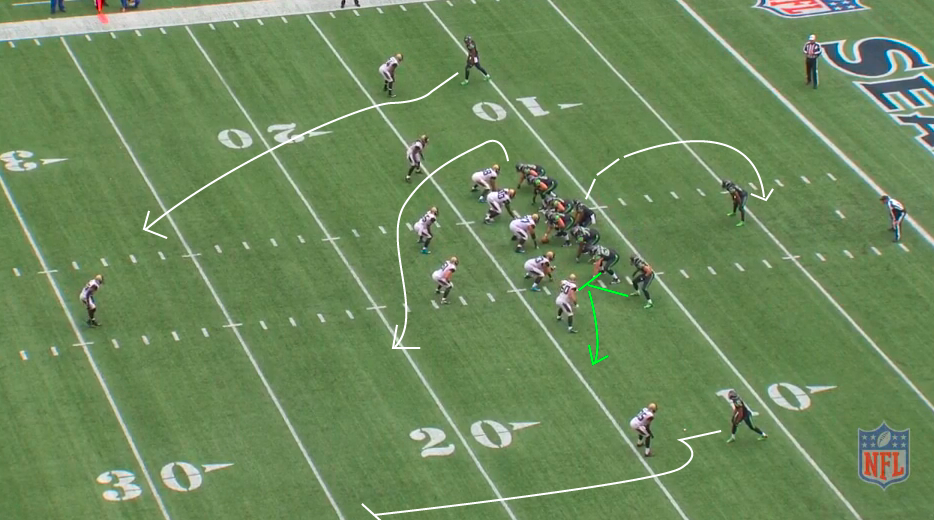 Here, with Willson's little fake block, he tricks the weakside linebacker into committing to Russell Wilson almost immediately. Wilson just lobs it over him, and Luke has tons of room underneath.

Anyway. One small error by Tate at the very end negated what was a perfectly planned and executed play.

This is Seattle's opening drive in the 2nd half. They're up 24-0. You notice that each time they ran this play it was on first down and ten? The Seahawks run A LOT on first down. So, defenses look for the run on first down.

This play is slightly different than the previous couple. Here, Luke Willson does not go into motion from Seattle's 12 personnel formation, and he runs the de facto sail route to the flag. Underneath him, Zach Miller runs the flat route. Little things change on each play, but you're still running the same play, right? Pretty cool, and just makes it tougher to diagnose and defend.

On this snap, the weakside linebacker actually does do a nice job of diagnosing the play and instead of attacking Wilson on the naked boot, he drops into coverage to pick up the flat route. That said, this leaves Wilson plenty of time to go through his reads and/or run. You pick your poison, I guess. I this case, Wilson kills them with the backside post route, which hadn't even gotten looked at to this point. 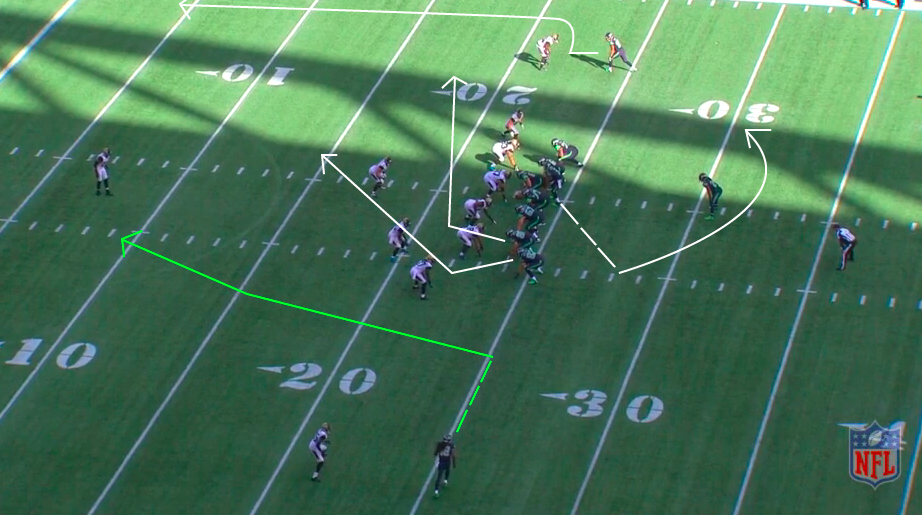 Wilson boots out. The key routes to look at here are Luke Willson's flag route and Sidney Rice's post route. Josh Evans, the Jaguars deep centerfield defender, now has the awesome decision of which one of those routes to commit to.

Interestingly enough, Evans actually decides correctly! At the point when Wilson cocks his arm back to throw, Luke Willson's route is wayyyyyy more open. We've got a middle linebacker chasing him down field and as we saw vs. the Niners in San Francisco, Willson's speed is no match for most ILBs.

So. Process: Wilson actually makes the "wrong" read here, technically speaking, because Evans breaks off to the middle to pick up Rice.

Wilson's reaction to that decision was caught on the SoundFX that week. You can hear him talk to Carroll first, I think, about how Rice was "even" or ahead of the backside trailing cornerback in coverage. It cuts to Wilson talking to Darrell Bevell and Tarvaris Jackson about how he had thought he saw both Evans and the MIKE linebacker going with Willson, which should have left Rice 'open' as the best option.

Instead, Wilson throws it to Rice, and immediately almost regrets this decision. "As soon I as threw it I was like, uhohhhhh."

However, Rice makes a better play on the football, as Evans is backing up waiting for it. Sometimes that's how it goes, and in this case, Rice's insane catch radius was key. This, by the way, is why Wilson likes throwing it to his tall guys, as he's said in camp. Their length can make up for inaccuracies or tough coverage.