Week three of the preseason is commonly known as the "dress rehearsal" for the regular season. The Seahawks first drive against the mostly full-strength Bears defense is analyzed for its meaning and ramifications on the regular season. What we learn: more deception, better run blocking, better pre-snap reads and timing, and a healthy Percy Harvin should man the most efficient and most explosive offense of the Pete Carroll era.

Share All sharing options for: The Drive: Seahawks fool & overpower Bears; the return of Beast Mode

This season all season I will be picking a decisive or definitive drive from each game and analyzing every play within it, both for understanding and meaning. This week I select the opening series for Seattle in week three of the preseason against the Bears. Of all the games within the preseason, it is the one we can most assuredly assume maximum effort from players and coaches. It is as real as the preseason gets.

(These should become more fun ... soon. I've been reading Russell's History of Western Philosophy almost all August but only have about a hundred pages left. It's not haha funny, but more like "dear God" and "wow, life on earth has sucked," funny.)

Seattle begins with a high value play which normally would involve a relatively high level of risk too. Here's how it starts but to what it progresses remains a mystery. The tiny rectangle of space ten yards to either side of the line of scrimmage is all television deigns to show us. 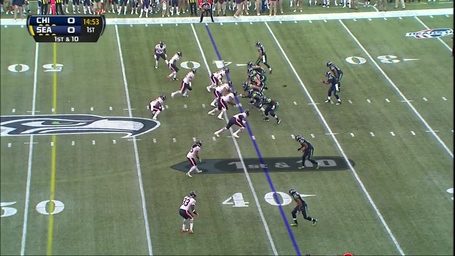 However we are capable of interpreting what we know.

The play starts as a play action out of shotgun. The line run blocks to pass block, and that will be a common theme all season. The presumed tradeoff is initial pop, push and dominance but at a loss of duration. The pass must be on time, and if routes are covered, the Color Commentator 2000 is sure to describe a throw away as a "good decision."

A strongside blitz by Lance Briggs is only partially contained by Justin Britt. What is most noteworthy here is Russell Wilson's ability to slide around the rushing linebacker and allow Britt to stay on his hip and clear him deep. 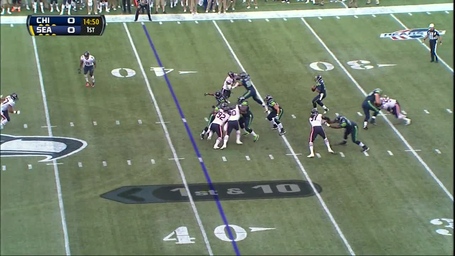 Lynch evades the blitz and picks through the line but is very slow to release into his route. He is not sufficiently clear when Willie Young throws off Russell Okung and comes unblocked toward Wilson, and so Wilson breaks contain right and scrambles for a short gain. The good run/pass-blocking of Zach Miller stops strongside end Lamarr Houston, sends him reeling forward as Wilson begins his scramble, and leaves him chasing while Wilson scrambles harmlessly out of bounds for three yards.

The strongside blitz was likely intended (in part) to isolate Miller on Houston. It did but the tight end won the matchup against the strongside end. Miller's good.

The nature of this play favors a scrambling quarterback. Underneath coverage is overtaxed chasing/not-chasing play action, getting depth and then recovering to hunt down Wilson.

Seattle will run block to pass block, and frequently.

Second play is a stretch left, irregular only in that Miller motions from tight right to slot left before the snap, and that the Bears send a weakside blitz. Neither tactic much factors into the outcome of the play.

This is the crucial point in the play. What is to happen is already mostly decided. 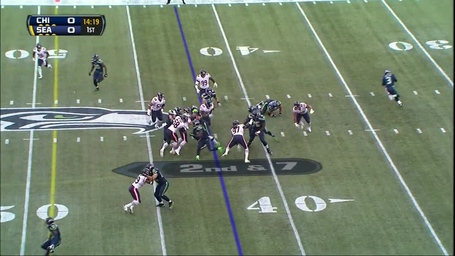 J.R. Sweezy has badly failed at cut-blocking Stephen Paea and Paea is streaming in toward Lynch in the backfield. Lynch is unspooked by the defender and continues left without incident. Paea is stiff-hipped and top-heavy.

James Carpenter is developing the kind of dominant push you want from your left guard on an opponent's weakside linebacker, and it is mostly Carpenter's push that Lynch exploits when he surges ahead for three yards. What else factors is Derek Coleman's nice seal block on Briggs. Though ultimately it is Lynch's ability to drive forward with three-hundred pound linemen draped over his left and right shoulder that defines this play and earns Seattle successful yardage toward a first. The absence of a linebacker in the hole to thwart Lynch allow his heroics.

Those defensive linemen also signal where blocking has failed. Britt fails to land his angle block on defensive tackle Jay Ratliff. Ratliff just outruns him, and if Ratliff retains very much of his once elite quickness, that's a hard angle block to land. Okung can't sink his block and is thrown off by Young, again. That's less excusable and more troubling.

Okung has looked bad and I am not sure extended play in preseason game four is going to remedy that. A salary cap crunch looms.

Lynch's ability to throw himself into the pile for some small gain, despite failed blocking on the backside, has routinely saved Seattle from stops for a loss, and now for the better part of three seasons.

So ... third down, and for that third down, a mundane variation on a four-wide receiver set: On the left and right, Seattle is attempting to clear for a short underneath pass. It clears deep on the right with Harvin challenging deep. It clears shallow on the left, with Miller in the slot and also challenging deep. The Bears anticipate the underneath and deep complements by Harvin and Baldwin, but Kearse, flashing his under-appreciated ability to fire out of his stance and into his route, is open. 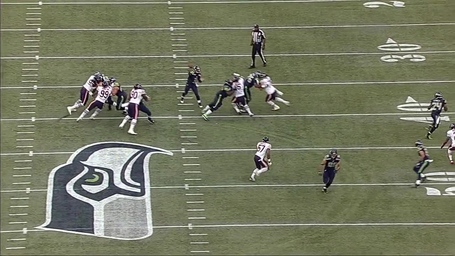 Here's why: Miller running deep and Lynch running a shallow out overtax the underneath coverage and create an opening between defenders--as planned. 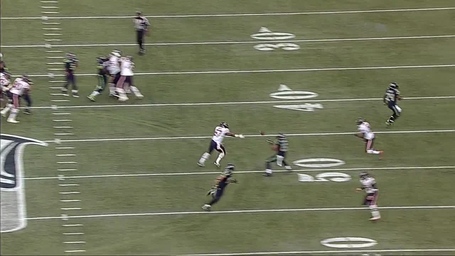 And also why arm strength and anticipation are so important to playing quarterback. Notice how far backup middle linebacker John Bostic has closed just in the time it took Wilson to complete his pass to Kearse. The timing is so good that Kearse is able to add 12 more yards in run after the catch.

We get hung up on ideas like looking off the safety and making multiple reads, but Wilson's thinking Kearse snap to completion. The read is made pre-snap. Had Wilson been anything but decisive post-snap, the play would not have succeeded as planned. This is Russell Wilson Year 3, and not an insignificant amount of growth.

Like Drew Brees, Russell Wilson is more of a pre-snap read guy than a post-snap read guy. Watch for fewer moments of spine-tingling improvisational heroics this season, and more in-rhythm passing and sustained drives.

The next play is a read option with phantom screen action to the right by Percy Harvin. It works because both decoys work, all linemen succeed at engaging and pushing back their assignment, and Sweezy in particular runs into the second level and jacks up Bostic. This use of multiple decoys will be a big part of what Seattle does so long as Harvin is healthy. Seattle debuted this offense in the Super Bowl and it, and Wilson's development within it, are what the Seahawks title defense most rely on. 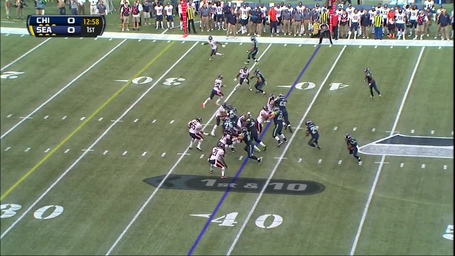 The safety is charging toward Harvin, and Ryan Mundy (21) and Briggs (55) are both outside left of the pile, as if to contain Wilson. That leaves five Bears to jam the middle, and Lynch is able to surge ahead with little resistance.

The Seahawks 2014 offense is predicated on deception. If Harvin misses time due to injury, and Paul Richardson in particular is not able to substitute ably, it is Harvin's ability to displace defenders rather than his ability to receive that the Seahawks may miss most.

And now something toyed with in the preseason that's maybe not long for the regular season: the James Carpenter left guard to right tackle pop block. 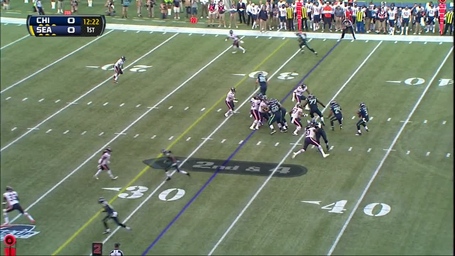 There he is, squaring up Houston as Britt, Sweezy and Max Unger jointly handle the defensive tackles. And there is his zone, now gaping, with Bostic (57) streaming in untouched into the backfield. Factor in an inside handoff play fake, and even a bailout block by Lynch is all but impossible. Sensing rightly that the play is broken, Wilson scrambles wildly right and is just able to huck past the first down marker and out bounds to the right.

The Seahawks have been doing this off and on all preseason. The intention would seem to be to protect rookie Justin Britt, who is developing into an excellent run blocker, but struggles terribly as a pass blocker. But in order for Britt to do less, Carpenter must do much more, and Seattle must be ready for the weird screw-ups possible when attempting unorthodoxy. Even with Wilson at quarterback and the relatively slow Houston at end, this nearly results in a drive killing super-sack. As is, the play's DOA.

The Seahawks are aware of Britt's limitations as a pass blocker. Last season Seattle rotated offensive guards depending on the game situation and matchups. I do not think it wants to do that with Britt, but Julius Peppers, Dwight Freeney and DeMarcus Ware may have something to say about it.

Seattle is built to never abandon the run. It will be interesting to see how Carroll, Cable and Bevell react if the team falls sufficiently behind. 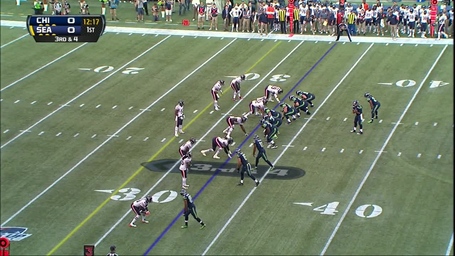 And here it is reaching fruition: 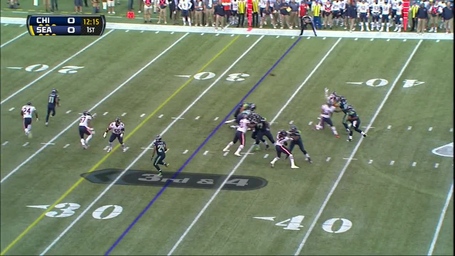 Once again decoy action has sent Bears defenders chasing ghosts. Few corners in football can run with Harvin, and so when he attempts a long crossing route like here, it's up to the underneath defenders to get depth and squat in the passing lanes. They don't. Briggs (55) is just now closing on Lynch. Bostic (57) is out of position, reacting to the pass, hopeless to contribute. Mundy (21) `dogged the play and blitzes when it's clear the action to Lynch is a fake, but his blitz, so late in arriving, is also hopeless.

Despite his speed, I doubt Harvin will be a post/go type speed threat. Seattle will use play fakes and slow developing routes like this crossing route to put Harvin in space, and let his quickness, evasiveness and tackle-breaking ability take over.

I do not know what dark arts Seattle uses to develop and maximize its talent, but holy crap Lynch looks quick and limber.

Tim Jennings (26) can been seen peering at Lynch pre-snap, but Paul Richardson eats up his cushion so fast, he quickly forgets the possibility of a run, post-snap. Richardson, especially as a decoy, is Harvin depth. Apart from that noble task, I would expect him to sub in routinely on max protect play-action plays in which Seattle wishes to force back the safety, or in which Harvin challenges the safety, and Richardson is supposed to cross underneath.

Don't let numerology convince you that Marshawn Lynch is "done." Shaun Alexander, a player who suffered an abnormally severe decline, had his best season at 28.

Perhaps Lynch's tendency to go playside most of last season had more to do with backside blocking than his own agility limitations. This is the best collection of talent Lynch has ever played within, and the continued stalled development of Christine Michael could mean Lynch surpasses 9,000 career rushing yards this season.