Have them sorted? Good. Keep reading.

This scouting report likely won't become a weekly feature (It's much more work than my regularly scheduled Xs and Os piece). But for this week's "Field Glasses," I'm breaking down our AFC foe, examining their strengths and weaknesses, and formulating a rough game plan for the 'Hawks.

Things the Chargers do Well

Edge Rush. The chargers don't get nearly as much credit as they deserve for being a good team coming off the edge. In 2013 their top two pass rushing OLBs missed 12 games each. Third string pass rusher Jarret Johnson managed only 3 sacks in his nine starts, and was still the teams' most productive pass rushing LB. Yikes!

This year, things look better. Melvin Ingram and Dwight Freeney both have a clean bill of health. Ingram's game tape looks decent technique wise, but his itty-bitty T-Rex arms limit his potential. It's difficult to engage, shed, and wrap up when you struggle to contact the opponent's torso. He struggles to put his hands on a typical offensive tackle, much less disengage to bring down ball-carriers and quarterbacks.

Freeney and rookie Jeremiah Attaochu practically lived in the Cardinals' backfield during the Monday Night game last week, although as you can see in the GIF below, the Chargers pass rushers seem to have called in sick on "learn how to tackle" day. With the underrated Kendall Reyes as the DE/DT on the opposite side of the field, this is a team that can bring it off either edge.

Cornerback. Brandon Flowers is no Richard Sherman. Heck, he's really not even a Byron Maxwell. But he has quietly been one of the league's better man-cover guys for the last 3-4 years now. I suspect the Chargers will lean primarily on zone to mitigate Harvin's short area danger, but I still wouldn't want to challenge Flowers with Baldwin or Richardson.

First year man Jason Verrett also looked very good against the Cards, playing both the field and the slot on Monday night, as the Cards spent most of the evening showing 3 WRs. Shareece Wright had a bad game, and I'd look to exploit him if the Bolts ever show man coverage.

Special Teams. In particular, the kick and punt coverage teams were exceptional. The punt return team did block a punt, but were otherwise unimpressive. Nobody's afraid of Eddie Royal breaking a big return.

Things the Chargers do Poorly

Safety play. The Chargers often use their safeties interchangeably, which is probably good news for FS Eric Weddle. He's a competent blitzer, a reliable tackler, and does a good job of run support. Essentially, he's a strong safety, with the associated liability in deep middle coverage.

SS Marcus Gilchrist seems to be bad at pretty much everything related to football. He was blew multiple coverage assignments, dropped a sure interception that hit him right in the hands, and wiffed on a few crucial open field tackles. It took the Cards about half a game to recognize that Gilchrist is the weak link in the secondary, but as soon as they started trying to isolate guys on him their passing game magically improved.

Offensive Football. For inexplicable reasons, there are people who believe the chargers have a big time passing game. They don't. Keenan Allen is an explosive weapon, but he's all they have. Longtime offensive staple Antonio Gates has more than just lost a step, he's lost an entire ladder. He can still haul in contested grabs and move the chains, but don't expect him to separate. Eddie Royal is even worse. He belongs outside the circle of trust after Monday's game. He and Rivers were never on the same page with sight adjustments, including an egregious blunder where Rivers threw a slant which Royal had adjusted into a curl. The result was an easy INT for Jerraud Powers.

The running game scares nobody. Ryan Matthews is clearly the most talented ball carrier they have, and he's generally regarded as somewhat of a draft bust. Still, he's clearly better than Danny Woodhead and Donald Brown.

Honestly, Matthews is good enough to be an effective back at the NFL level, but the Chargers O line is embarrassingly bad. Both guards are awful (the RG in particular is painful to watch). The center made bad line-calls all night on Monday, and struggled greatly to identify proper protections against Arizona's patented double A blitz looks. The RT is San Diego's best run blocker, but he's got heavy feet and struggles pass protecting against speed rushers.

Helloooo Avril/Schofield/Irvin/Bennett/... Even worse is that the RG is such a liability in run blocking the Chargers almost exclusively run to the left!

I would prefer to stick to the base Cover-3 and put nothing new or interesting on tape. Rotate Earl Thomas towards Keenan Allen. Rivers doesn't have the high precision arm needed to challenge Sherman, so we don't even have to respect that threat.

While we don't need to, I expect Dan Quinn is going to want to show some interior pressure looks in order to get them on tape and set up future blitzes and twists. I would particularly look to target the B gap on the defensive left, stunting either a 3-tech or even Bobby Wagner down the alley, challenging the Chargers' center to identify and adjust the protections pre-snap. 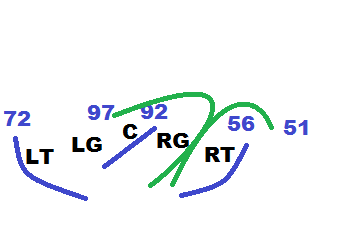 The above diagram is a simple 5-man pressure twist designed to attack the right guard. The Nose Tackle, Brandon Mebane (92) aggressively pushes the center towards the LG. Bruce Irvin (51) and Jordan Hill (97) loop around to pressure the right side.

A more complex version of the same theme is to blitz Irvin off the edge a few times. The defense will have to start respecting his speed, and assigning a blocker to him when he's on the edge like this, even when he's playing LB. On the critical play, Irvin can then drop into coverage. His man is left blocking air, and (if properly executed) Hill should get a free-run at the QB even with only a 4-man rush against six blockers!

If things start to go poorly (and I really don't foresee that happening, but anything can happen in the NFL), the Hawks can switch to man-free, putting Sherman on Allen all game long and letting Byron/Burley handle the chaff. It shouldn't come to this, but it's the emergency plan if Allen starts going off.

I don't expect the Chargers running game to ever get off the ground. Seattle's front-7 is substantially better than the Chargers O line right now. As a team, they aren't very committed to pounding the rock anyways.

Every week, the Seahawks' offensive gameplan begins the same way. "Run the Ball a Lot." I would favor the outside zone this week, going straight after those quick penetrating edge rushers and see how they like getting 300+ pounds of Britt or Okung right up in their grill. In fact, this is a good week to bring back the 6OL look we featured at times last year, putting the 320 pound Alvin Bailey in charge of blocking the 265 pound Melvin Ingram at the point of attack.

In the passing game, this could easily become the sort of "signature" week where Russell Wilson goes 14 of 19 for 160 yards. I would specifically try to attack the deep safeties, as I mentioned in my "weaknesses" section that Gilchrist in particular is a vulnerability. The easiest way to accomplish this is to send 3-4 routes downfield on all passing plays. I've diagrammed a pair of plays below. I'd like to talk briefly about them, as they feature themes Bevel will employ on Sunday. 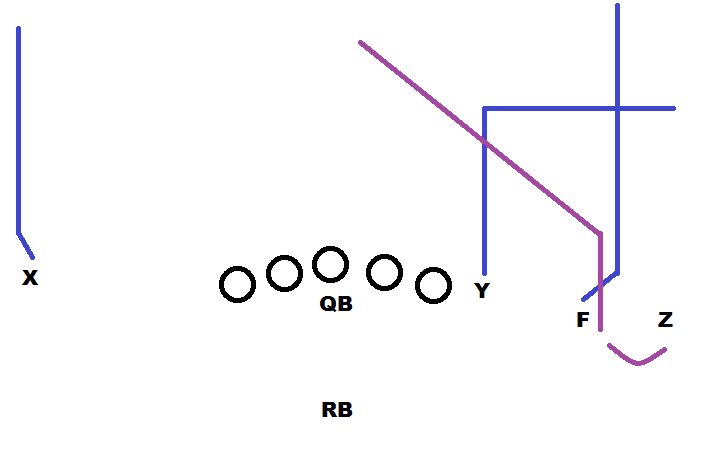 I have yet to see the 'Hawks employ this precise route combination. However, the concept behind it is a staple of Bevel's passing game. Three deep routes all to one side of the field is a good way to isolate a player on a safety against any form of zone coverage, and that deep-out is a reliable man-beater when you have a QB like Wilson who has a very precise arm.

The stem of the purple route is designed to mimic a tunnel screen to Percy Harvin. The downfield concept works without it, but I wanted to show it here. Even during the pre-season, Seattle was deliberately showing the tunnel screen. The goal is twofold: Either the DBs crash aggressively down on the phantom screen and get burned deep. Or (and equally good) they begin to dismiss it as a threat, making it that much more dangerous when the screen is actually called! It's a very effective constraint play! 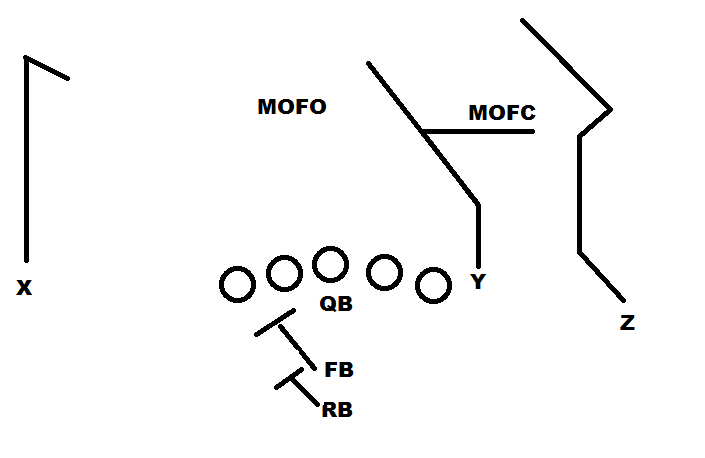 This one's a deep bomb based on play action. The TE's has an option route based on if the middle of the field is open or closed (if the safeties are playing the sidelines or the center, respectively).

The X route is dead by design. He needs to get deep enough to threaten the deep zone on that side, then cut the route short preventing that defender from drifting into the two routes that actually matter. This is actually a 1 read play. Even Sam Bradford could tear it up. (Too soon? Hey I waited two whole weeks!) The QB is reading the corner lined up over the Z receiver.

In either case, the 'Hawks should be able to generate a favorable mismatch deep down the field provided the 7-man protection is able to hold long enough. This concept can also be run as a max protect with the TE staying in to block as well. Then it's the Z receiver or nothing!

I would expect much of Seattle's passing game this weekend to be variations on these two themes, plus whatever trickeration that Bevell has in mind. I suppose we'll discover how wrong I am on Sunday, although if you want to look extra smart, be sure and correct me in the comments before then!