The Seahawks may be at the forefront of the NFL's change toward spreading it out, but they can still line up in their heavy run sets and come at you.

As someone that is becoming more and more enamored with the "college game" that is creeping into the NFL, I thought it'd be worth pointing out that the Seahawks can still get into their I-formation or jumbo packages and pound the rock. The Seahawks may use deception and backfield motion to confuse defenses more than anyone in the NFL these days, as Greg Cosell posited this week, but they can still line up, tell you where they're going, and proceed to run you over.

This dichotomy between the Seahawks' adoption of the innovative college game and their adherence to the old school smashmouth identity was apparent in Seattle's Week 1 win over the Packers. We've already talked about the new stuff they're breaking out this year with Percy Harvin, so let's take a quick look at some of their foundational run plays they can go to when Percy's not a huge factor or not even on the field.

The Seahawks run this play from a "20" personnel grouping -- three receivers and two backs -- something that the 2005 team liked to do a lot with Mack Strong and Shaun Alexander. Doug Baldwin is lined up out to the left and Percy Harvin and Jermaine Kearse are out right.

It's just a standard outside zone left. Russell Okung kcks Clay Matthews out, James Carpenter walls off the defensive tackle playing him heads up, and Derek Coleman picks up the inside linebacker that looks to fill. Textbook. Add in a nice block by Dougie on the outside, and you've got a 21 yard gain. I do believe the contrast of this play and all of the other stuff Seattle had done up to that point prompted a tweet from me during the game.

That wasn't the only "heavy" look the Seahawks used. Seattle ran I-formation quite a bit, actually, and even busted out their trusty 6OL look to start the 2nd half.

As we've done in the past, Davis Hsu and I will tag-team this. Davis points out:

While our collective minds focus on the increased play level of Russell Wilson and the ubiquity of Percy Harvin, the best offensive player on the field on the NFL's opening night was possibly Marshawn Lynch.

The Seahawks opened the 2nd Half without Percy Harvin on the field, and came out with a "tackle eligible" in the huddle instead. #79, Rookie Garry Gilliam, would serve as a 3rd offensive tackle to open the Seahawks' drive. I have mentioned before that the most deadly set for the Seahawks' offense will be "11" personnel (3WR, 1 TE, 1 RB), but make no mistake, the Seahawks can still mash with two tight ends or with two running backs in the game.

For instance, the Seahawks had many effective plays vs Green Bay using Derrick Coleman at fullback: Explosive runs, touchdowns, and punishing power short-yardage runs for key 1st downs. Another example, this "Tackle Eligible" set, is just one more look that defenses have to deal with. 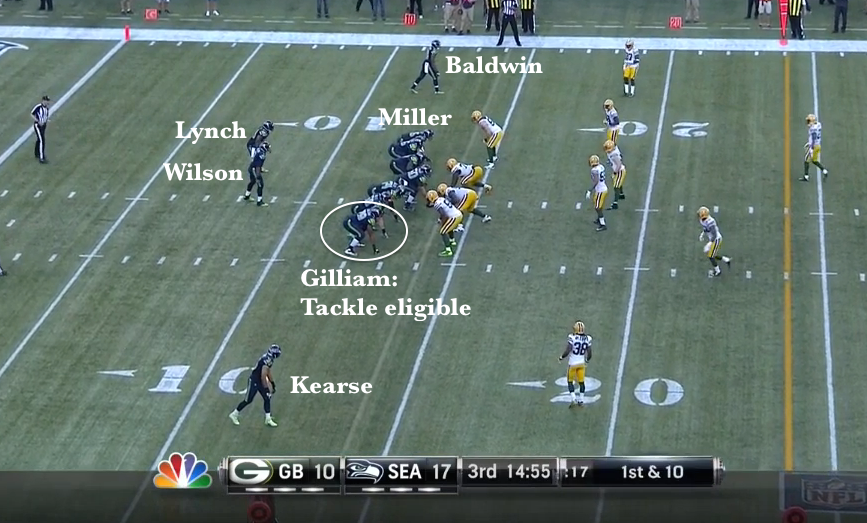 For whatever reason -- maybe the Packers don't feel good enough about their speed in base -- but they respond to this obviously heavy run grouping in nickel defense:

Much of the Seahawks' offense is based on speed, QB movement, tackle-breaking ability and misdirection. The other component is still based on physically overpowering opponents when possible.

Go back and read that again. Important.

Garry Gilliam went undrafted, but the Seahawks had a 6th Round grade on him, according to John Schneider. When Garrett Scott was waived, the Gilliam pickup became even more important. Gilliam is athletic/SPARQed up, and was formerly a tight end at Penn State before being switched to tackle. I can't think of a better way to get Gilliam involved as a rookie than as a "tackle eligible," where he can gain NFL game experience even though the Seahawks starting offensive line is "set". Additionally, he can actually be a threat to catch a pass, perhaps once per year - but oh what a fun catch that could be!

Take this Tom Cable special from 2010:

Back to the play:

Lynch is offset left, meaning the play is targeted toward right guard J.R. Sweezy. Seahawks run inside zone right. Sweezy gets rocked back by the DT, but LG James Carpenter more than makes up for it. The entire left side of the line cleans up, with Carpenter springing the key block on Mike Daniels. He moves & rotates Daniels, and Lynch sees Sweezy stoned while at the same time seeing Carpenter opening daylight.

This is exciting tape of Carpenter giving a taxi ride. Unger and Okung stream to the next level.

The Packers do fine on the play-side (Gilliam's side/offensive right side), but again, the Seahawks' left side is operating in textbook style here. Zach Miller's man can't disengage to get Lynch, and Lynch slides behind him. Unger is five yards downfield on the inside linebacker. Russell Okung is 10 yards downfield manhandling the other inside linebacker. Marshawn knows how to read the cutback so well, and can still cutback, even at 28, SO WELL.

The Packers do have an 8th man in the box, but the player, #29 Casey Heyward, has to freeze to honor Russell Wilson on the read option. That moment of hesitation is all it takes to turn a 7 yard run into a 14 yard run, as Heyward is left to tackle Lynch downfield, past the first down marker. Russell Wilson's movement ability aids the run game, creating these moments of hesitation.

Below, you can see the meat and potatoes of the play. Carp cleans up with the help of a nice push by Okung, and Zach Miller occupies Clay Matthews. J.R. Sweezy gets beat, but Max Unger does a great job of sealing Brad Jones just long enough for Lynch to get by.

Davis, in reference to the GIF below:

A few other points for below: Notice how much cushion the cornerback at the bottom of the screen gives Kearse! How many times do you see a corner give a receiver a 10 yard cushion pre-snap? That is free money in the future. The other free money is at the top of the screen. The CB is cheating again after the snap -- just like on the pop pass play that netted the Hawks a TD (the pop pass TD had already happened at this point).

Cheating into the flat to hold RW on the keeper means that Doug Baldwin is streaming down the sideline with a deep safety positioned in the middle of the field. There are passes to the flat and sideline to be had if defenses continue to "play tendencies" and assume run on this play because of the heavy personnel.

Lastly, Sweezy probably doesn't get a "Plus" on his gradesheet, as he does not win his assignment, but does well to "finish" as he smashes his man into Clay Matthews at the end.