The college players that could become Seahawks for week three.

This might be the shortest edition of the Gems all year. We’re coming off what was a pretty terrible weekend of college matchups and there weren’t a whole lot of players I want to highlight (and that have cutups on draftbreakdown.com available). I did really like what I saw from a player I mentioned last week: Oklahoma CB Julian Wilson. In addition to breaking up two more passes (4 total now on the year), Wilson also put up 6 tackles, and a 100-yard INT return for a TD. At 6’2"/201 and a Senior, this is currently THEE most Seahawky corner on the market. 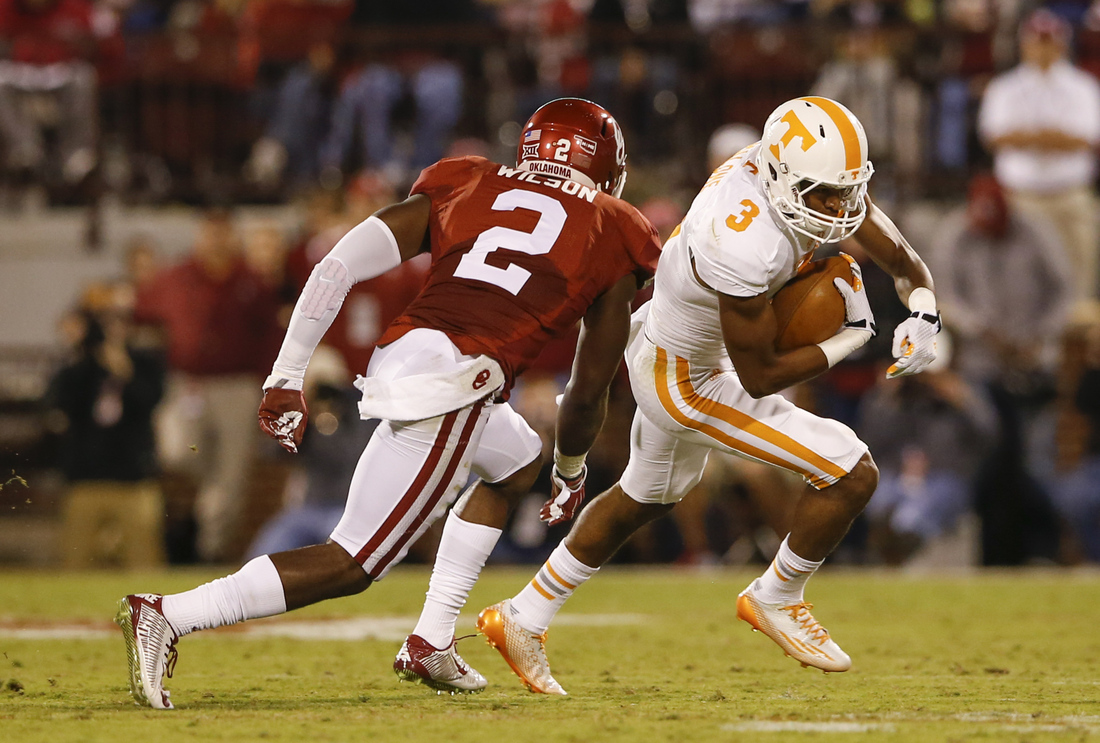 Another potential Seahawky corner that is farther under the radar is Western Kentucky’s Cam Thomas. At 6’1"/190 he’s built like a cross between Byron Maxwell and Richard Sherman…not quite as tall as Sherm, more lean than Max (he also sort of combines the names of our starting safeties…so that practically makes him honorary LOB right there). So far this year, Thomas has produced 15 tackles and 2 PBU. Okay numbers. But what had drawn me to him (after his size), was his 2013 line: 41 tackles, 1.5 TFL, 1.0 sacks, 5 INT, and 10 PBU. His 15 combined passes defended ranked 21st in the country last year.

There wasn’t yet any tape featuring Thomas, but knowing not only this year’s draft, but also most of the last three years, I knew that I could still get a sense of him by watching a cut of his WKU secondary-mate from last year; Jonathan Dowling. And Dowling actually had 4 games to study. Here is WKU vs Tennessee from 2013. Cam Thomas will be #19 in white and red, and he’s fairly easy to track because (like Richard Sherman) he always plays Left CB (no travelling).

I really like Cam’s mirroring and he shows nice footwork and fluid hips. Not only is WKU similar to Seattle in its lack of CB travelling, they also use a very similar scheme: man-cover looks that fade to zone, and a lot of press-bail technique. I don’t know that the Hawks care if they need to coach a player up on how they want corner played, but I can’t think it would hurt to come in knowing similar concepts. Thomas, and his projected 4.53 speed, appears an easy transition to the LOB. Cam Thomas is currently draftscout’s #104th overall player.

I know I said earlier that I try to stay ahead of other draft writers on ID’ing prospects, but when I’m not out in front, I have to give credit where credit is due. Today I’m giving credit to Tony Pauline for mentioning Florida OT Chaz Green. He wrote about him yesterday and I tracked down some tape (in this case it was from 2012 after Green missed all of 2013 with an injury redshirt). In this particular game, Green (#75 at RT) is facing the vaunted Louisville pass-rush duo of Marcus Smith and Lorenzo Mauldin, and I think (for a sophomore) he handles himself brilliantly:

Green is listed at 6’5"/310 and I can’t quite tell if he is a Senior or a Junior. 2014 is his 5th year in college, so academically he’s a senior, if not graduated, but having redshirted as a freshman and again last year with his injury, I believe he would technically have another year of eligibility. He may not use that last year…nobody likes an old college prospect (except for Seattle and Carolina). Green at presstime was the 317th overall prospect for this year.

Back on the defensive side of the ball, one player I talked about back in May as a player I thought had nice upside was Virginia DE/LEO Eli Harold (http://www.fieldgulls.com/2014/5/30/5763832/2015-nfl-draft-jareds-gems-dibs-edition).

Harold is 6’4"/250, which are pretty much ideal LEO specs, and already this year he has 12 tackles, 5.0 TFL, 3.0 sacks, and a FF. Oh, and he has hooper athleticism. Only a Junior, we may not see Harold declare this year. Then again, if he keeps up his current sack pace he’ll likely finish in the top 5 in the country, and that’s always a nice resume builder to head to the draft on.

I don’t yet have Harold’s game from this weekend in which he worked Louisville’s touted LT Jamon Brown, but here is his opening week game against UCLA (ironically, Harold reminds me a bit of UCLA’s Anthony Barr):

Worth noting that Harold has had at least 1.5 TFL in each of his first three games. Only 8 players finished 2013 averaging 1.5 TFL/gm or better last year (one of whom was Anthony Barr). Harold is currently ranked as the #12 DE for 2016.

The last thing I’m going to leave you with this week is a bit of a mystery. The following is a tape of a player I was tipped off to. Well…the player is in the tape. I can’t say who the player is yet. Suffice it to say that I think the tape is fantastic even though the player hiding within is currently projecting as an UDFA. But we’re gonna let him sleep a bit more…