Or: How Antonio Gates scored a hat trick on the Seahawks.

The Seahawks have been using a formation that I have been referring to as "Trips Right-Read Option". Matt Bowen, who does excellent Chalk Talk work for Bleacher Report, calls the formation "Dakota". Dakota is one way to deploy "11 Personnel" (3 WR, 1 TE, 1 RB).

The way the Seahawks, and most NFL teams use this "trips look" is usually out of shotgun with an offset running back. The tight end is generally "in-line" opposite the trips receivers. Some people refer to the formation as a 3x1 with the tight end referred to as the backside "X". The play can be "Trips Right" or "Trips Left" -- you can mirror the play. 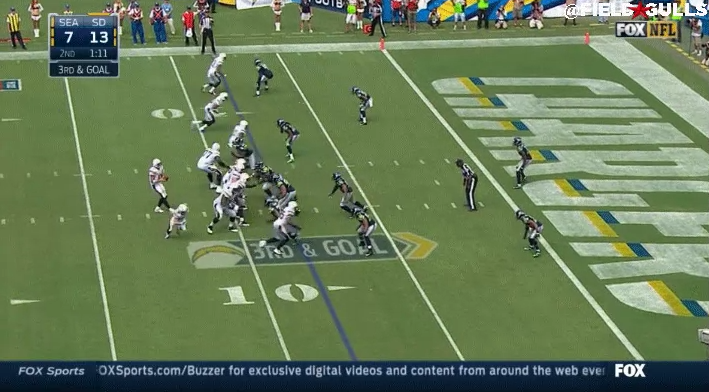 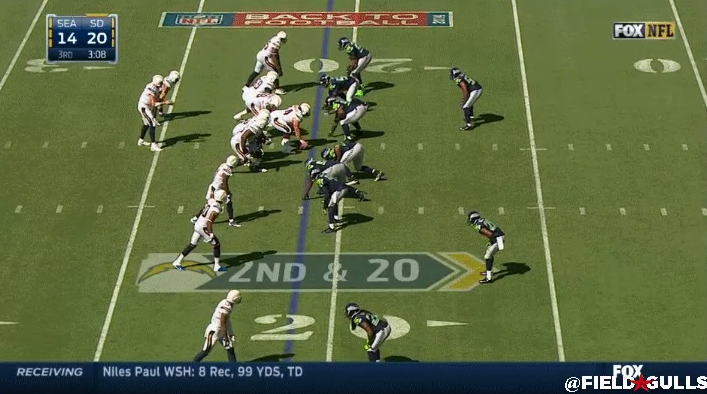 Either way, the trips is usually to the open side of the field (wider side), with the TE aligned toward the tight side (boundary side). The hash-marks typically dictate which side you run this play.

There are many plays an offense can run off of this "Dakota" set:

(1) Bubble screen, the trips look creates its own "game" on the edge and allows the two other WR to be in position to block, leaving the WR catching bubble a possible pick/screen and perhaps leaving only one man to beat

(3) Inside handoff (regular, no read, called in the huddle)

(8) Any sort of pass to any of the five eligible targets after a play-action fake to the running back.

The Seahawks use this formation quite often because it creates a seven-man box. One of the seven defenders must honor the edge with the QB as a possible run threat, so it's almost like a six man box against six offensive blockers.

The Seahawks can also feature Russell Wilson as a runner of thrower out of this set, and utilize his play action skills.

Lastly, the formation is an easy was to get Percy Harvin the ball on a basic bubble concept, as well as placing Percy in man coverage on a crossing route. The Seahawks also motion into and out of this look with Percy and other receivers to flip the strength or show the fly sweep motion.

***
So -- as for Antonio Gates and his hat trick: The Chargers used this "Dakota" formation incredibly effectively, but in a totally different way than the Seahawks.

Philip Rivers is not a run threat like Wilson, nor does San Diego have a Marshawn Lynch or Percy Harvin. What the Chargers do have is a very good quarterback and a Hall of Fame tight end. Rivers and company were seeking to use this trips look to isolate TE Antonio Gates onto a linebacker or safety while pulling Danny Woodhead underneath him in a flat route. Gates begins the play "in-line" but begins to move upfield after the snap on all three touchdowns.

When the Chargers went "Trips Left" it forced Seattle to pull Richard Sherman away from his best position (defending the defensive left side of the field, the left sideline). As you can see in both the "Trips Left" TDs to Gates, Sherman is in the near or far slot on the Defense right. Trips left is fantastic for the Chargers because they have pulled the Seahawks two best defenders away from Antonio Gates (Earl and Sherman are now away from Gates).

Kam Chancellor, Bobby Wagner, K.J. Wright, and Malcolm Smith are all better coming downhill then trailing in coverage (as I assume most linebackers and safeties are). The play works well mirrored as well, as Gates scores from the left side, and this time Sherman is occupying his normal spot on the defensive left, but in the end, this play is designed to feature the Chargers' two best players (Rivers and Gates and I know some may say Keenan Allen is the Chargers is the #1 target but the argument still stands).

Gates and Rivers have hooked up for more TDs than any QB and TE in NFL history after the "Hat Trick" versus the Seahawks, and they did it by isolating a favorable matchup using "Trips Left".

All three TDs feature great routes by Gates, great catches, great pocket movement and pocket toughness by Rivers -- and just money throws. I can see other NFL teams testing their luck versus the Seahawks using this look, but I can see Pete Carroll mixing it up in coverage. I could also see Carroll leaving Richard Sherman "home" as a possibility on "Trips Left," where he can defend the left side of the field.

Something to look for versus Denver.